It’s probably a no surprise that one of my favourite place to chill and have a good meal is in Publika, I absolutely love that place. It’s like all the good eateries decided to get together and open their places in one central location, Publika or more accurately, Solaris Dutamas. So, what’s new discovery have I stumbled upon? It’s Ante Kitchen & Bar! This place is not exactly new, I have heard of them before from couple of friends. 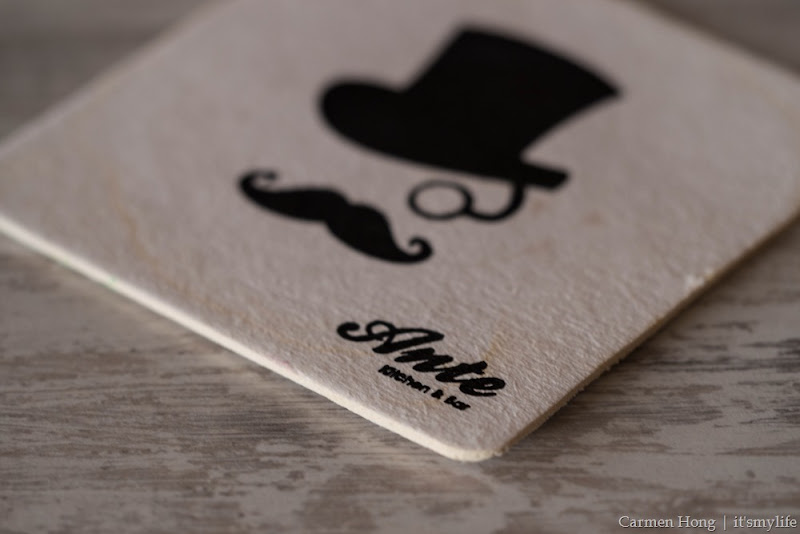 For this review, I will be posting two separate posts on it because it’s a handful to cram them into one post. I’ll be talking about the soups, pasta, pizzas and the drinks in this post. The rest, well, I’ll leave it for another post. :3 Look out for that post, yea. 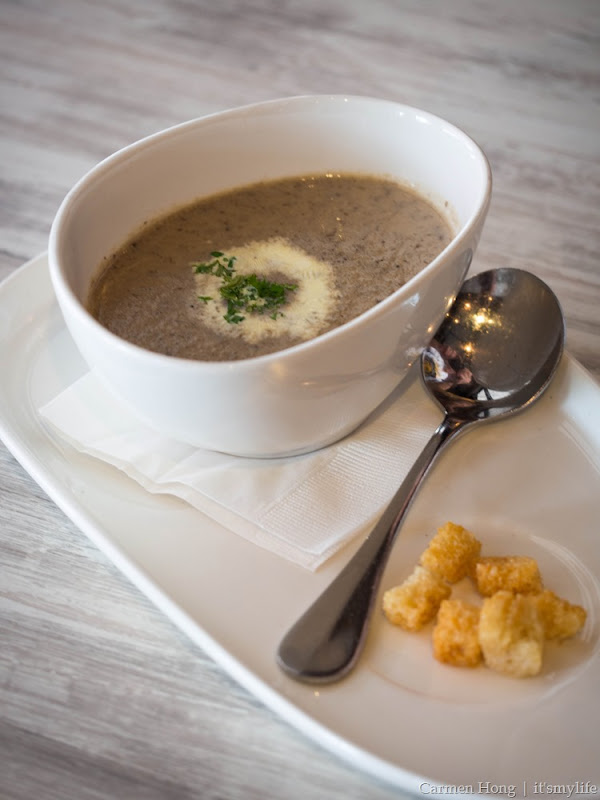 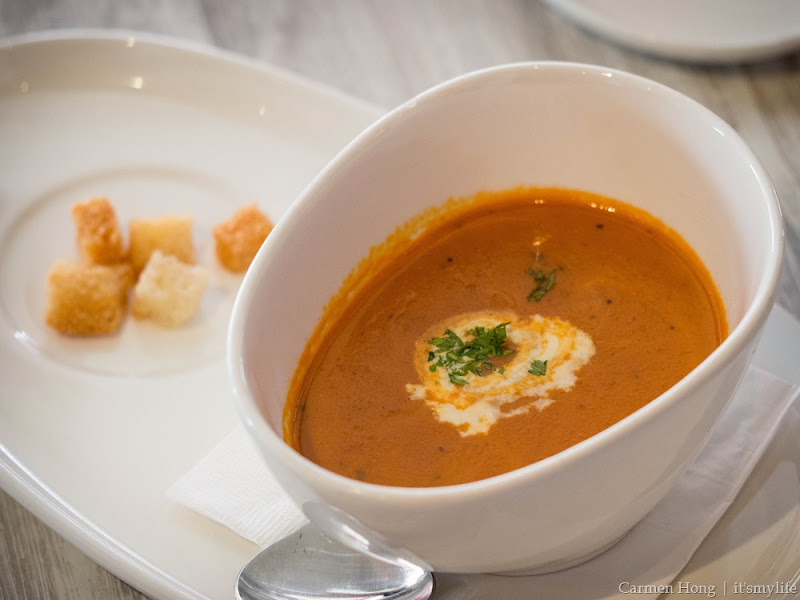 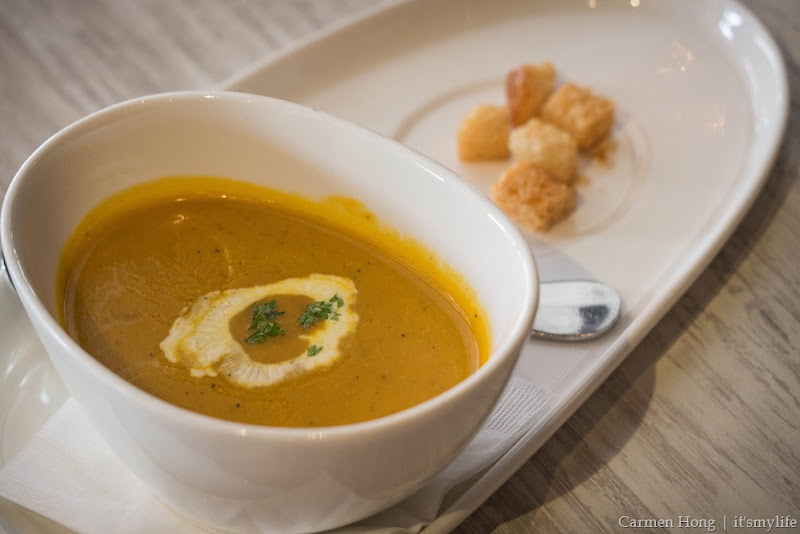 I don’t think there would be a big surprise as to which is my favourite soup, because I’m predictable like that. Of all the soups that I had taste of, I loved the Chunky Mushroom Soup for a damn obvious reason. You can find mushroom soups at any, like seriously any western restaurants, but once you have a taste of this, you’ll love this over any other. Most of the other mushroom soups are prepared using pre-made stocks or canned soup, those are “eek, yuck”. But this one, the chunks of mushrooms are all over the soup so you know fresh mushrooms are used and they are bountiful in the soup; there is at least more than 4 types in it.

Everyone else seemed to love the Cream of Pumpkin, which I found was lovely and creamy with a rich pumpkin taste. Yet, it wasn’t too overwhelming. I generally dislike pumpkin, but if I think that this is okay, it means it’s good enough. The Chef’s Tomasco Soup didn’t quite leave an impression on me, chances are because the Chunky Mushroom Soup has stole all the limelight from the soups. One thing worth mentioning is the crispy croutons made in house which is served with all the soups. It is one of the crispiest, lightest and tasty croutons I have ever eaten. Just one bite, and the croutons crumbles in your mouth. Imagine this with the soups, mhmm yums! 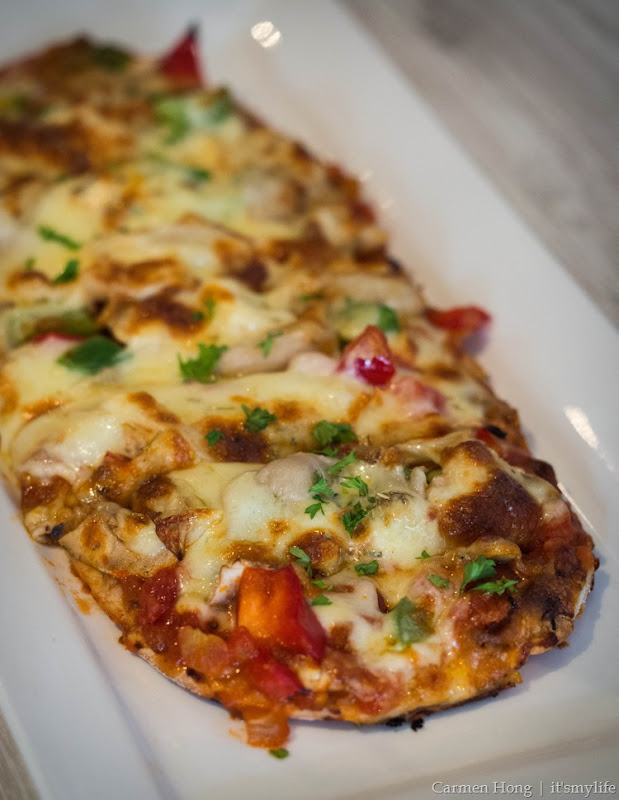 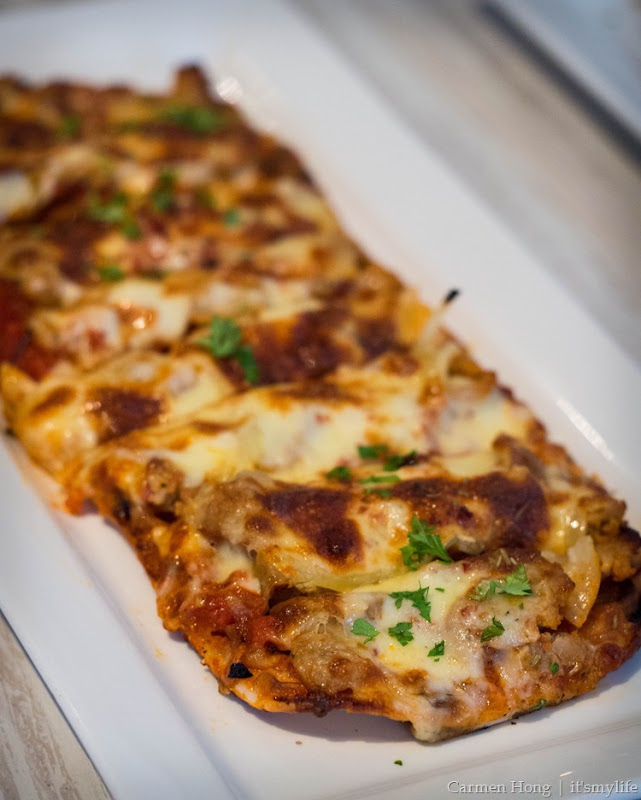 The pizzas from Ante Kitchen & Bar are the crunchy thin crust pizzas, but unlike your usual pizzas these are oblong shaped. I found them quite adorable and it is easier for sharing as well. To get the best from these pizzas, it was recommended to use your hands to eat them. They are so crispy thin that it actually looks ridiculous to try to cut a thin crust pizza and then proceed to struggle with forking it up into your mouth. I had a bite of the Mixed Shroom first, which actually is a vegetarian pizza filled with mushrooms. Except I didn’t taste much of the mushrooms, just some capsicum and cheese and crust. Yeah, mehhh.

Then, I took a bite of the Signature Chorizo & Bacon and my taste buds literally went *boom*. The bacon, the pork chorizo, *mumbles* ahfsgdf. It was so good. Maybe it was because I had the plain, bland vegetarian pizza before this and in contrast, the Chorizo & Bacon tasted way better. Everything in that pizza was good because of the generous amount of bacon and the pork chorizo, every bite will have you go “ahh, give me more”. 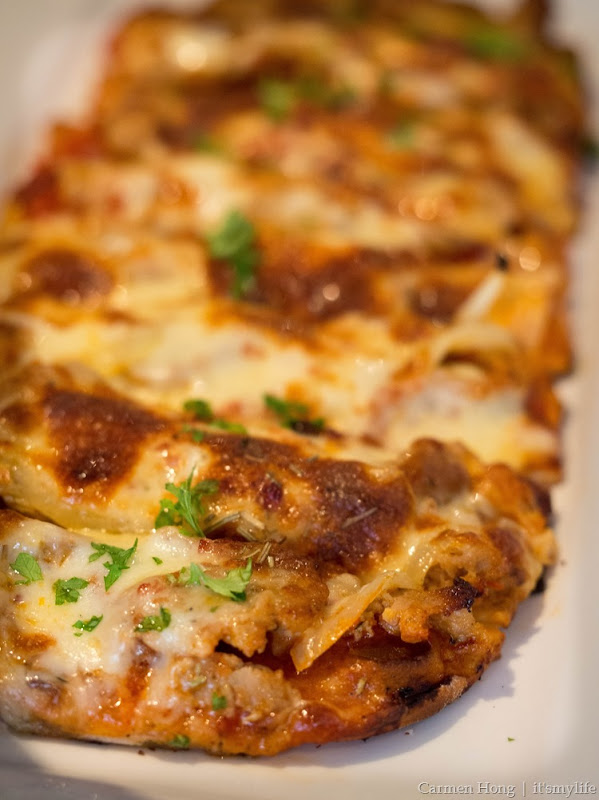 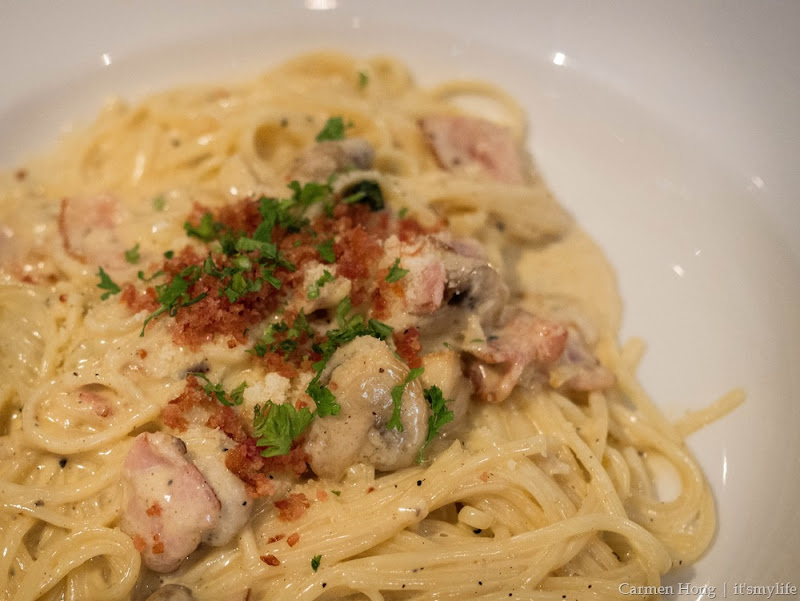 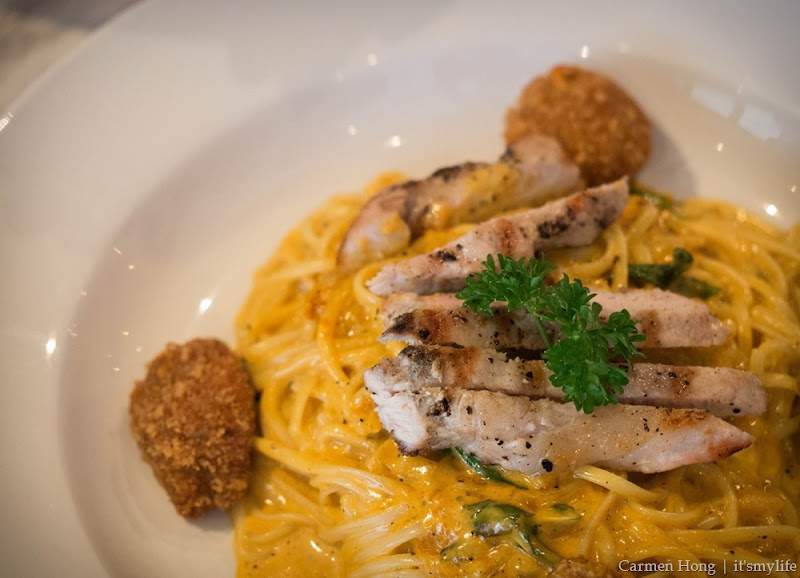 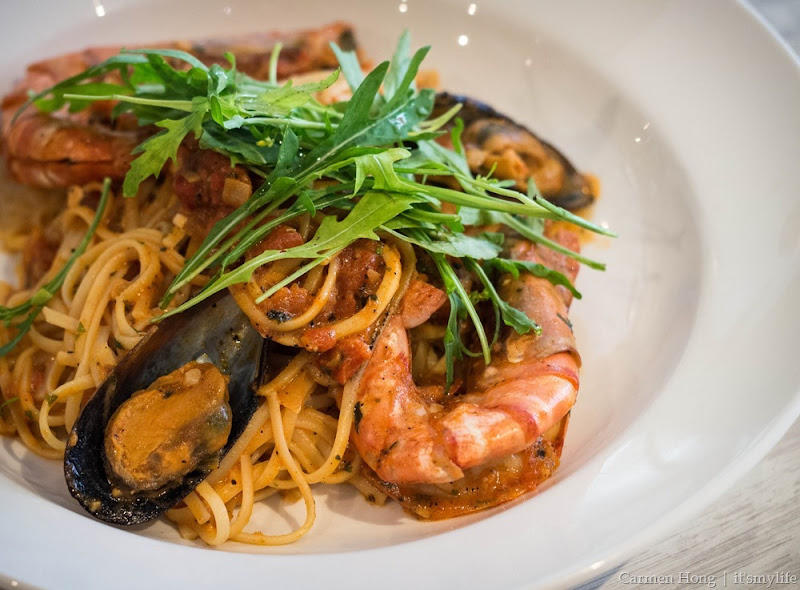 If I could use one word, just one to summarise these pasta I would say, “creamy”. Actually that word doesn’t quite apply to the Seafood Marinara, but for the Curry Cream Pasta and The Real Bacon Cabonara, it was that. It was so creamy that I thought the pasta used in these two dishes were different from the Seafood Marinara. I’ll be frank and say that I prefer my pasta less creamy and thick. I’d like to slurp my pasta without getting the excess sauce all over my lips, thank you very much. Now don’t get me wrong, the curry and the carbonara was both tasty, just a tad creamy. You can add for some lemons with the carbonara by the way. The marinara was pretty normal and didn’t leave any impression on me. 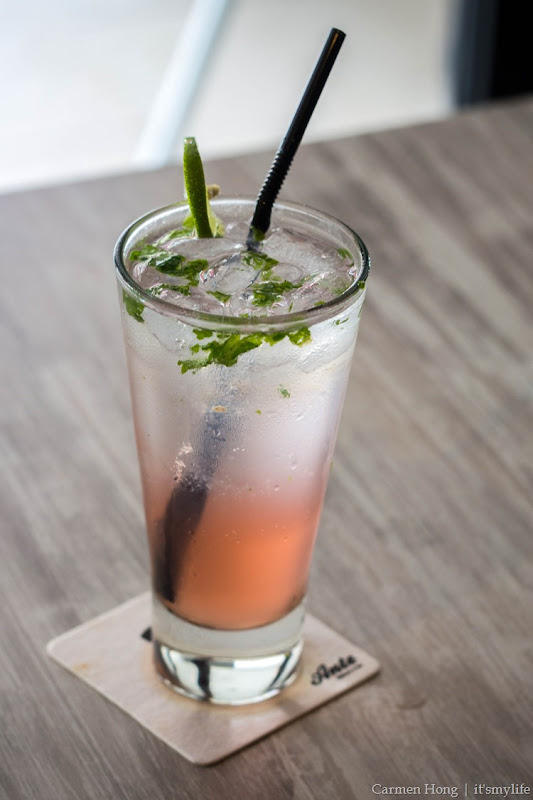 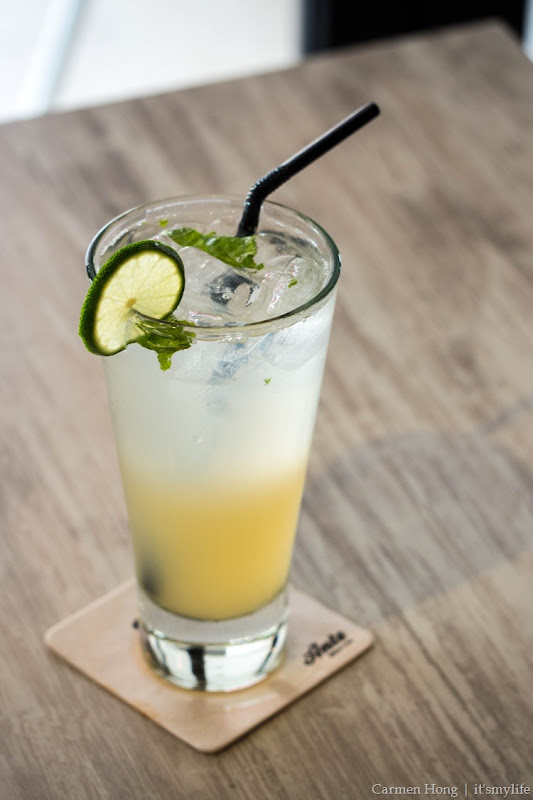 I actually didn’t quite like both the mocktails, even though it was highly recommended. Not to say that it tasted horrible, it was more of the lack of “oohmph” and it felt like it was just a jumble mix of whatever nearest drinks they got their hands on and concocted these. Passion Fruit Mojito is concocted with mint, passion fruit and soda whereas Rosie’s Lychee Fizz has lychee, lime and pandan leaf.  If you’re more of a tea person, I’d recommend the Nymph on the Mile. It’s a flower based tea, so it smells really good and taste even better. You actually get a pretty after taste. Yes, pretty. You’ll feel a very pretty and aromatic after taste.

So, that’s all for the first part of the Ante Kitchen & Bar, do look out for the second part of the review next week.

&. Thanks to Foodirector and Ante Kitchen & Bar for having me. +

Note: The pictures in the post took me the longest to edit using Lightroom, probably because I only used the Olympus M.Zuiko 60mm F2.8 macro lens to shoot this time around. Why? I wanted to try something different, I shot with the same lens for the Zakuro 2, Scott Garden review. I came home, sulked the entire time during the edits of the pictures and this time, it’s no different. Shooting with the 60mm macro lens is somewhat ridiculous because the focus area of the lens is almost ridiculously tiny, especially when I haven’t even learned how to use it properly. 😐 Nevertheless, I hope you found the post enjoyable and the food looking good. For the moment, I’ll be sticking to using my kit lens for food first.