A friend of mine, together with his brother, recently opened a cafe located in The Strand, Kota Damansara. Now, before you go on thinking this is yet another cafe, it really isn’t. This cafe is an manga themed cafe with its main character being Bmon (drawn by my friend’s brother), so you’ll expect to see comics splattered across the walls and as part of the decoration of the cafe. 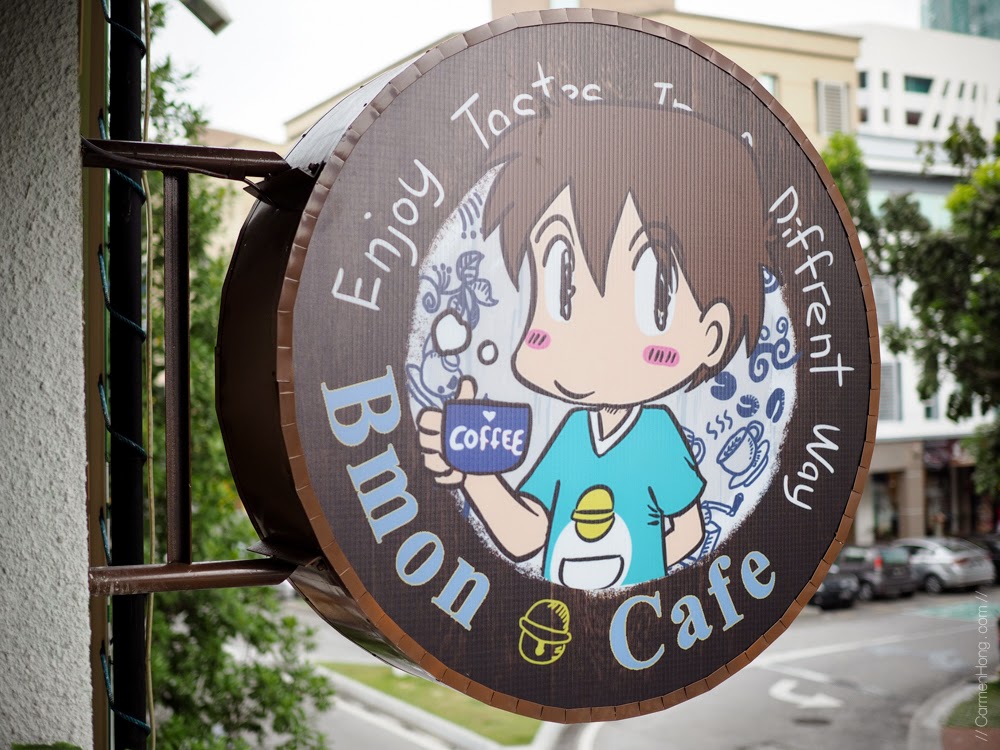 It is located upstairs, so do look out for the stairs leading to the cafe. As always, I’m completely hopeless when it comes to shooting pictures of the ambiance and the decoration of the cafe. So, allow my words and your imagination to work. I promise I’ll try to shoot the interior of the cafe next. But for pictures of the cafe, do head over to FollowMeToEatLa post on Bmon Cafe.
I did get to take pictures of my outfit in the balcony of the cafe, which was one of those rare occasions when I do. I always make it a point to dress up but I don’t get my picture taken. But the interior of Bmon Cafe was too gorgeous not to take some snaps over there. 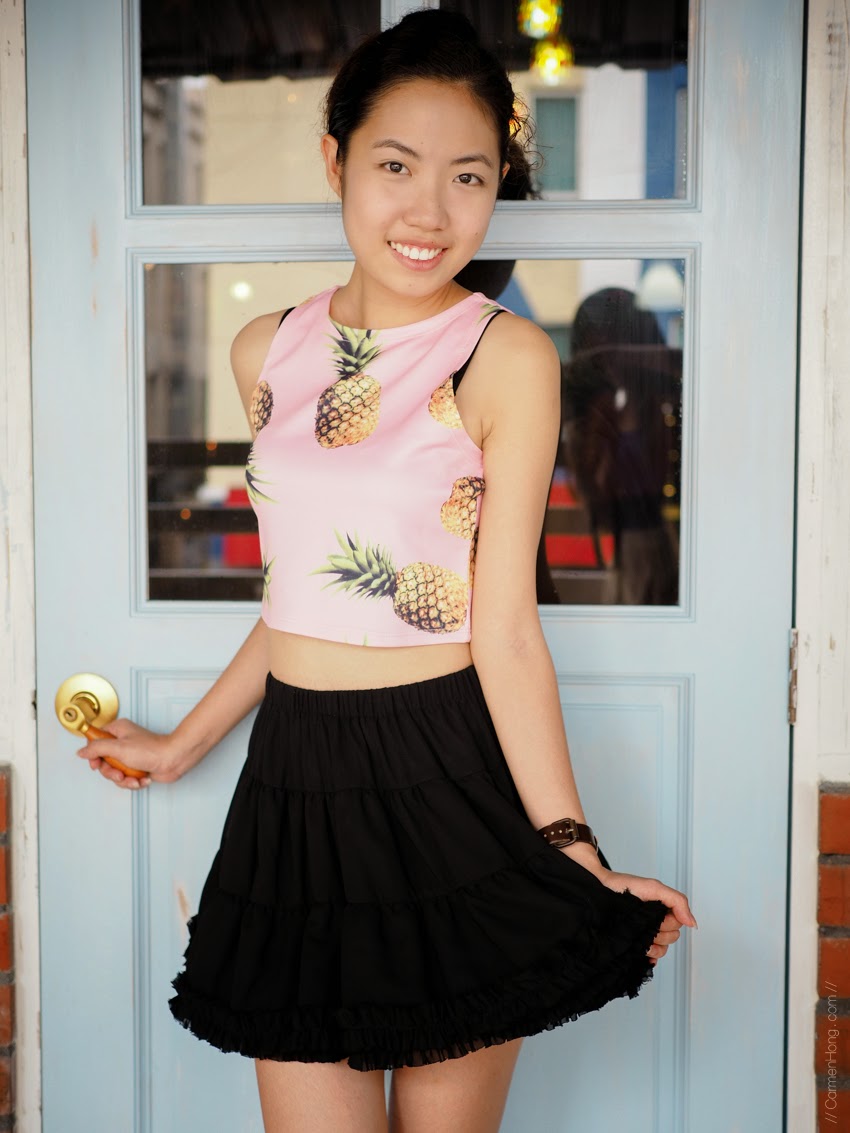 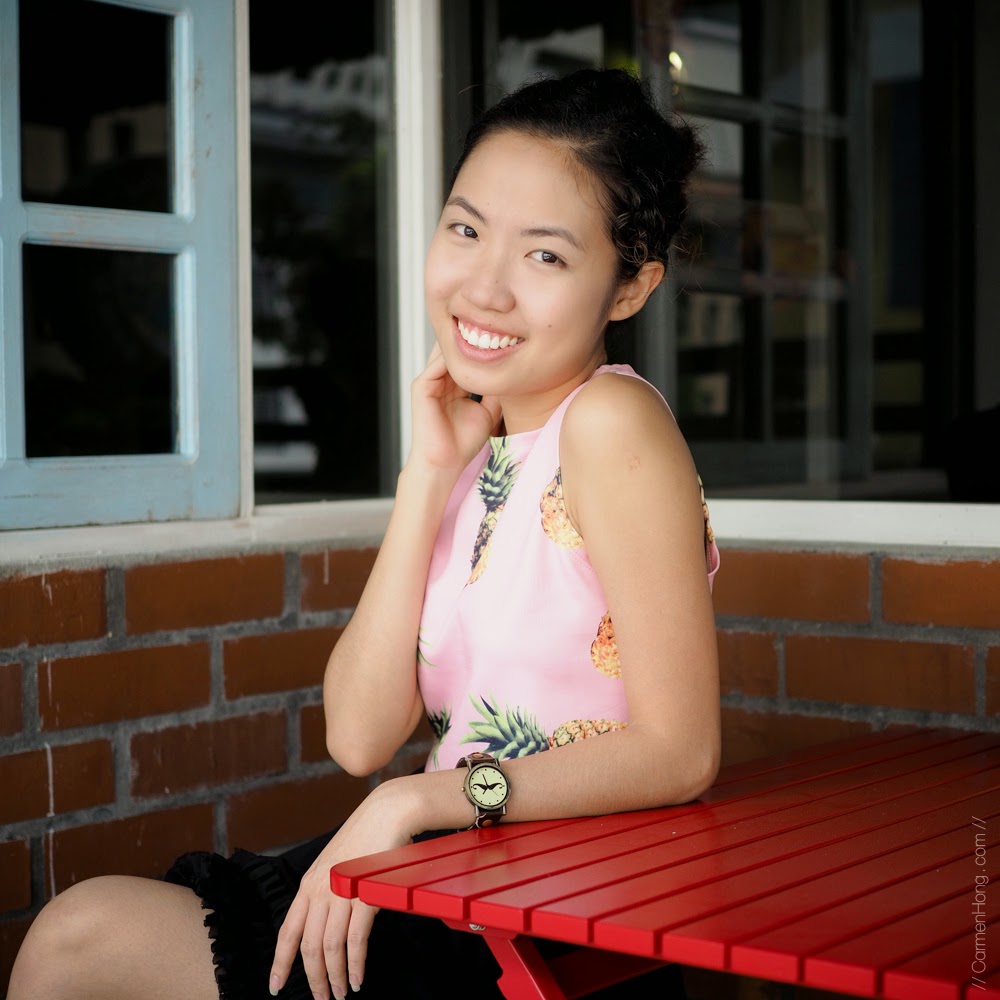 As the cafe is newly opened, the menu is simple with the usual breakfast meals, pastas, pizzas, waffles and salad. The drinks menu however, is rather extensive. I won’t be posting so much on the drinks, but instead talking more about the food. 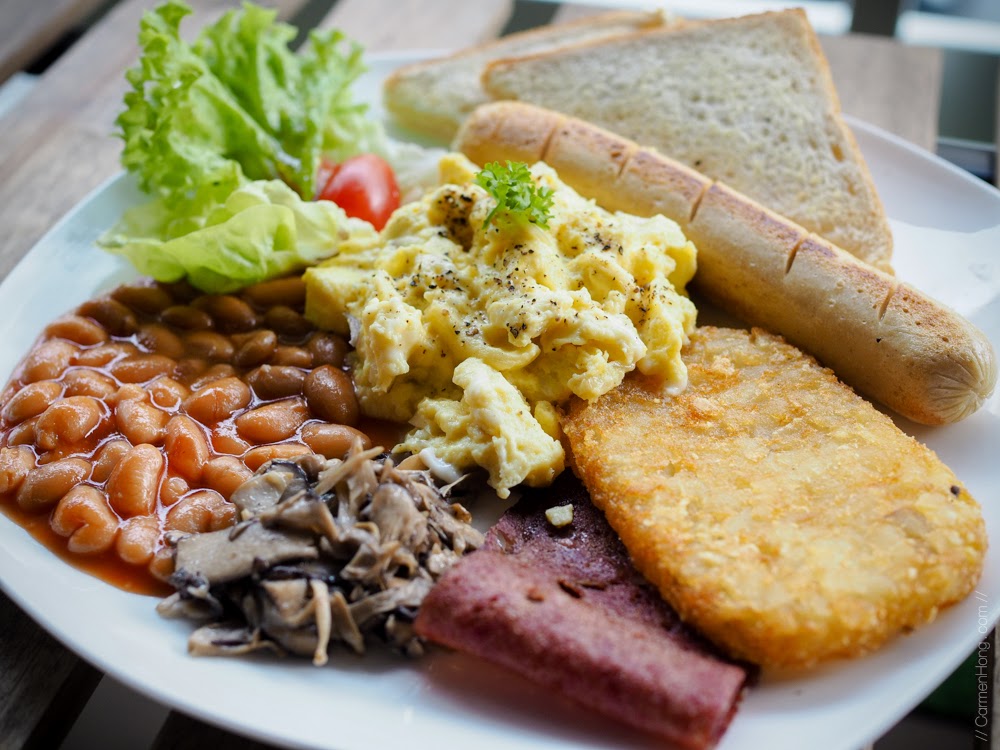 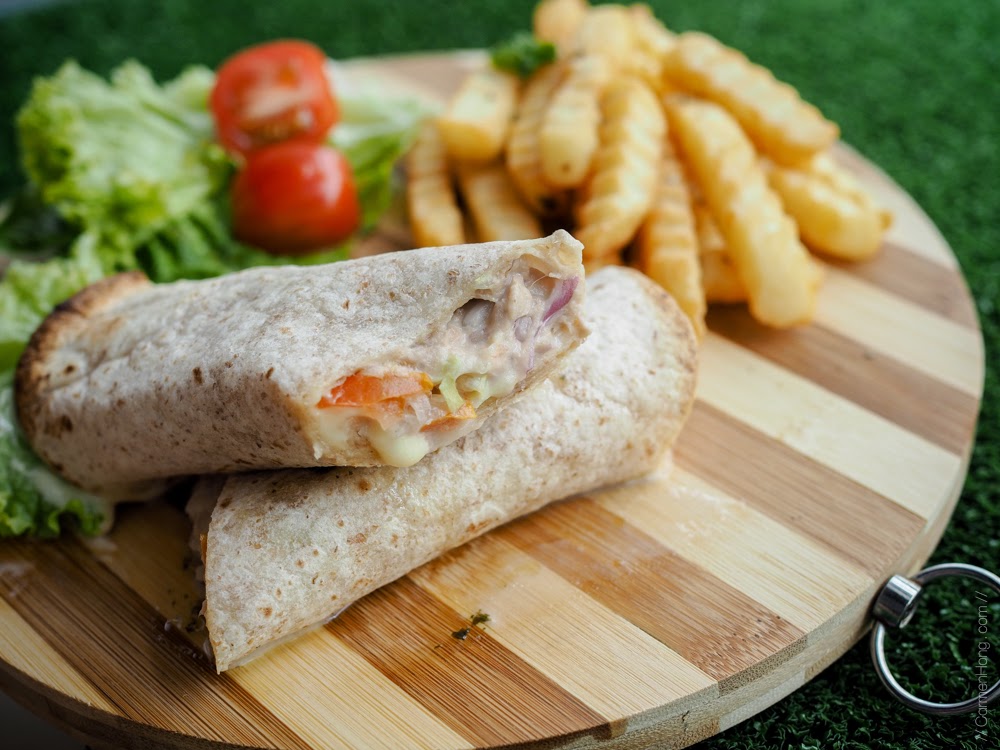 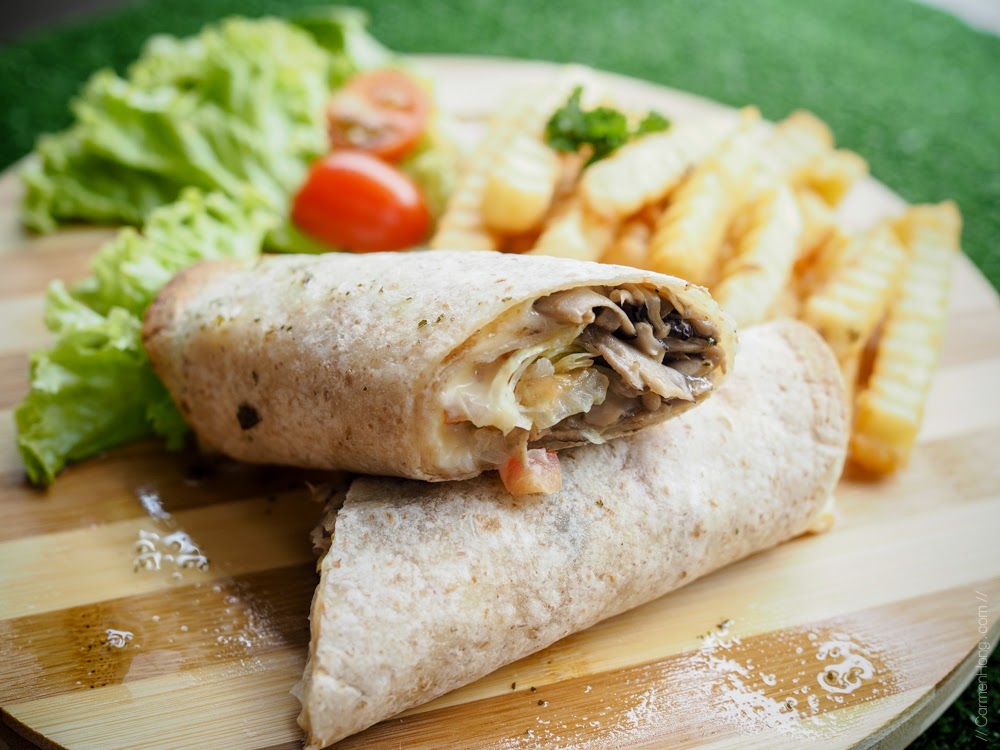 Mushroom Wrap | RM12.90
The All Day Breakfast is mostly a staple in most cafes these day, over at Bmon Cafe, I found it to be reasonably priced and rather simple. It comes with scrambled eggs, bacon, baked beans, hash brown and sausage. Then, they also serve wraps in the cafe, with a choice of either tuna, chicken or mushroom. When I was there, we got to try the wraps pictured above.
I never was a fan of wrap, I thought they were soft cold mushy and just not tasty! But the ones I had in Bmon Cafe, was served warm with the wrap being crispy thin and as I sink my teeth into them, I love how generous the serving of the fillings ; for both the mushrooms and the tuna. 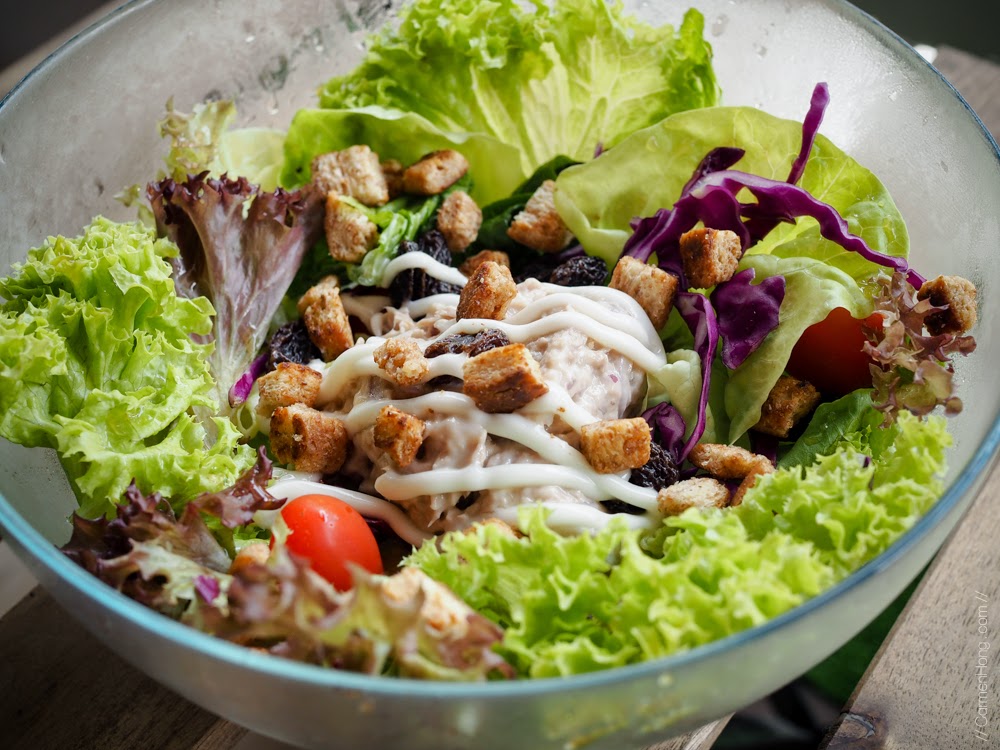 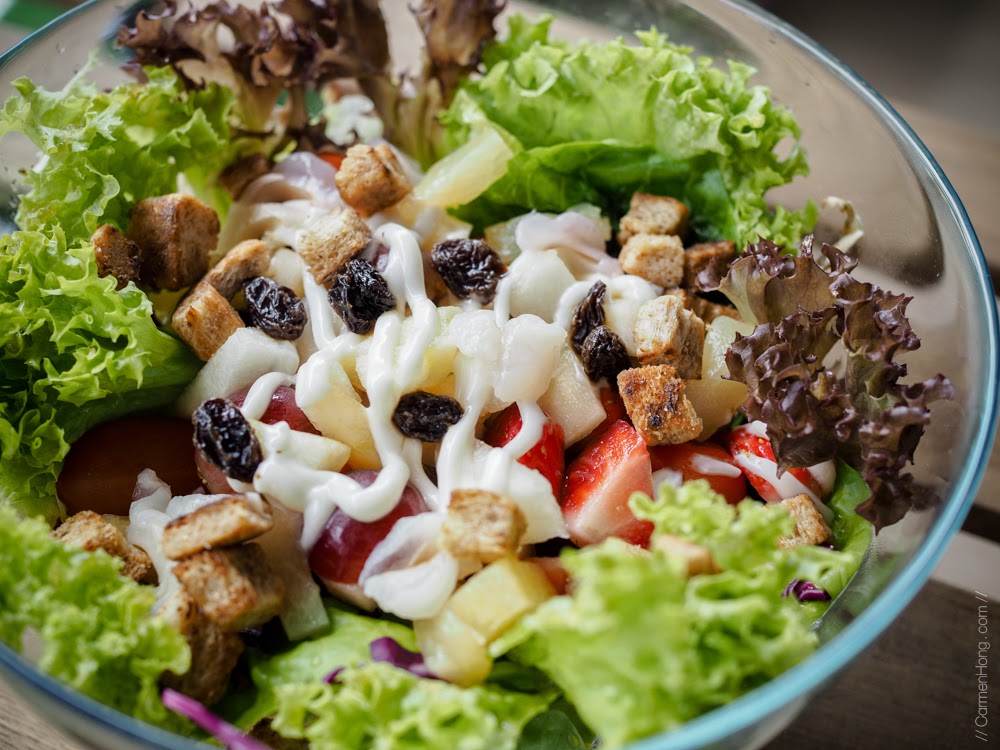 Fruit Mayo Salad | RM10.90
I love vegetables, but I have never ordered salad when I’m eating out since it is especially easy to make myself. But the ones at Bmon Cafe were visually appetizing, served in an authentic salad bowl which makes it easy for sharing and the combination of the fresh vegetables and the choice of ingredients are refreshing. There is no secret in which was my favourite one, the Fruit Mayo Salad. 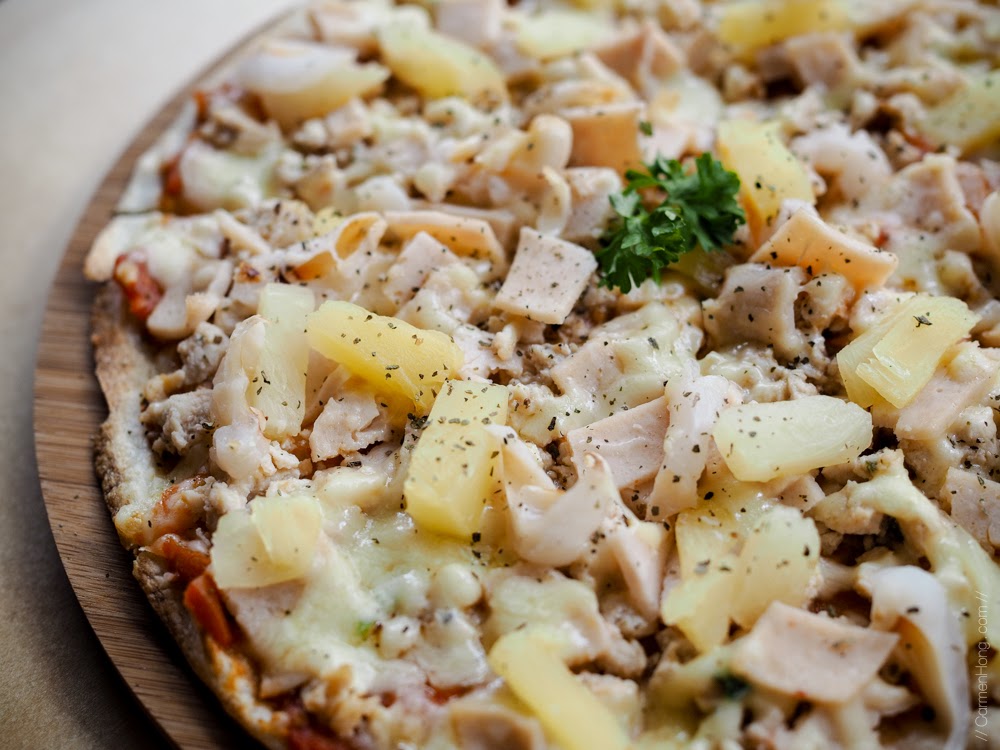 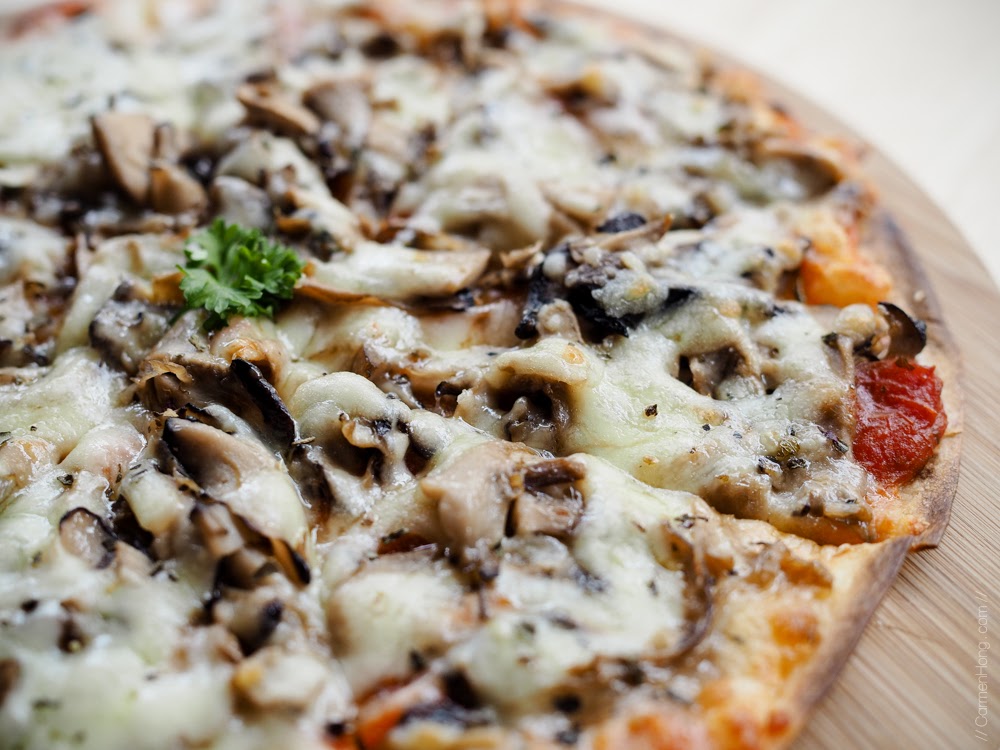 Mushroom Pizza | RM13.90
And next, we had the crispy thin crust pizzas which comes in two variety with is the all-time favourite Hawaiian Pizza and the Mushroom Pizza. I have always loved mushrooms, so my pick would be that pizza. It was crispy and loaded with sliced mushrooms, coupled with cheese and with a hint of tomatoes base sauce. The Hawaiian was delicious too, hitting the right notes with the generous toppings of ham, chicken and pineapple. 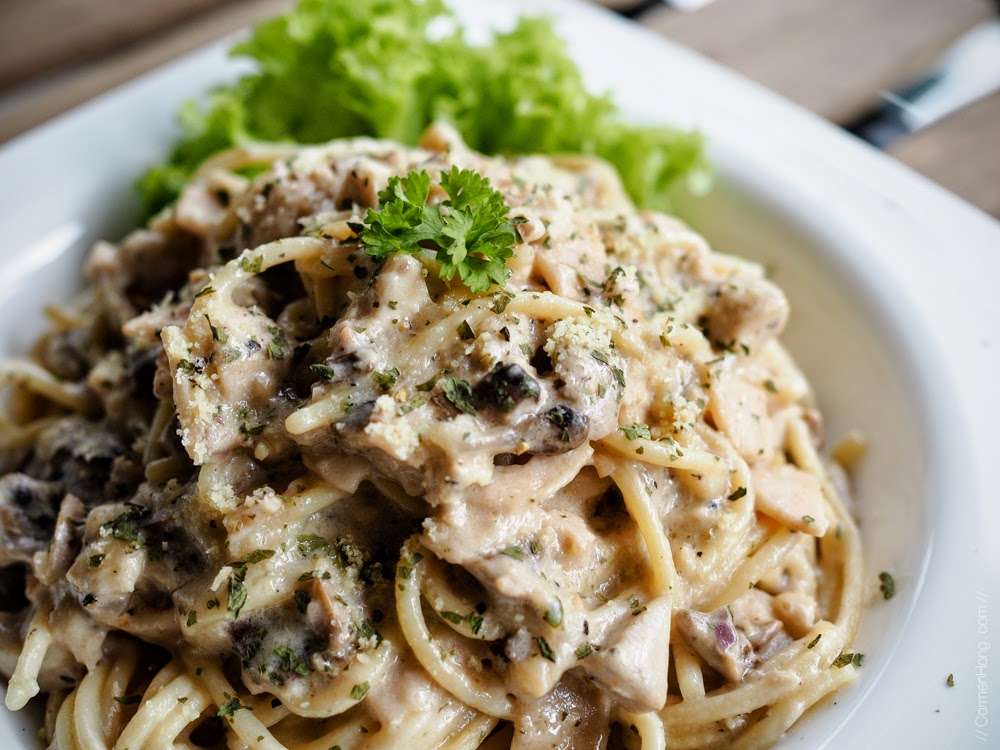 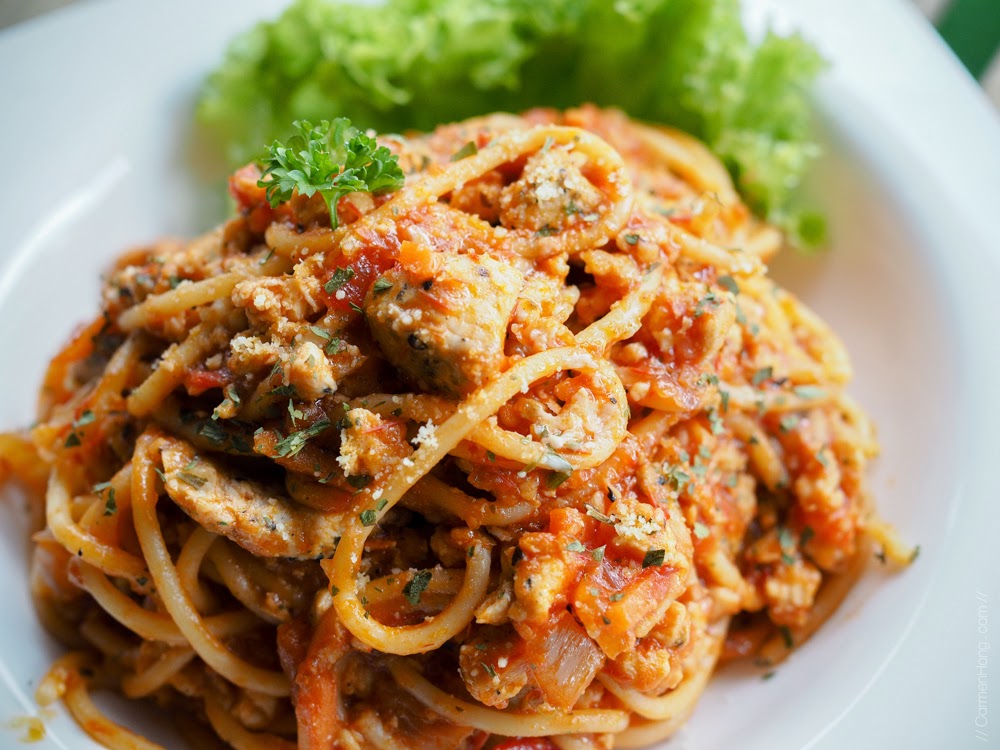 Chicken Bolognese Pasta | RM13.90
Similar to the pizzas, there are two choices of pasta which is the two favourites which the the carbonara and the bolognese flavour. I found the Chicken Carbonara Pasta to be very rich in flavour, more so because of the finely chopped garlic used in the sauce. The Chicken Bolognese Pasta  was tasty too, and there is an option to choose either chicken or beef. 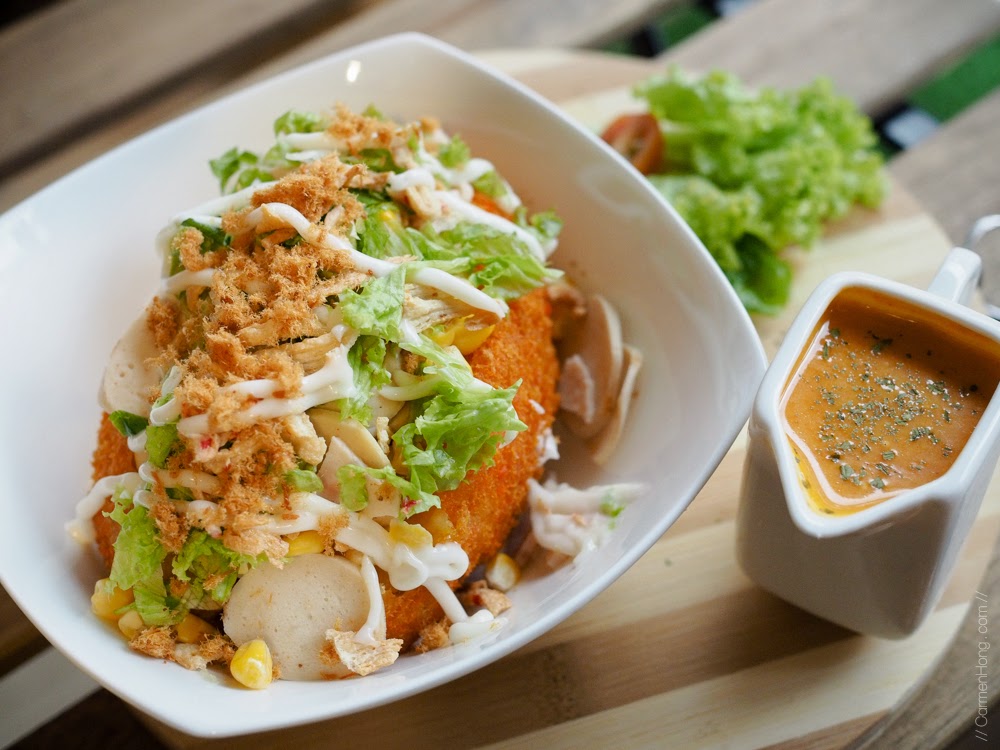 Hippo In The Pond | RM14.90
I saved the best and my favourite dish for last, so if you’re still reading the post then you’re in luck because I’m about to tell you about the dish which is served in extremely limited quantity in Bmon Cafe. I heard only 5 were made in a day. So what is this Hippo In The Pond? It is actually potato croquette which have fried with breadcrumbs and hidden within this, is a whole boiled egg. You can see that it is also loaded with salad, ham and chicken floss as well.
You can see the sauce at the right side of the picture, and that is actually the cheese cause. You’re supposed to pour the sauce and eat it together with the potatoes and everything else in the bowl. And can I just say how heavenly the combination of both the cheesy sauce and the potatoes? It was deliciously amazing! 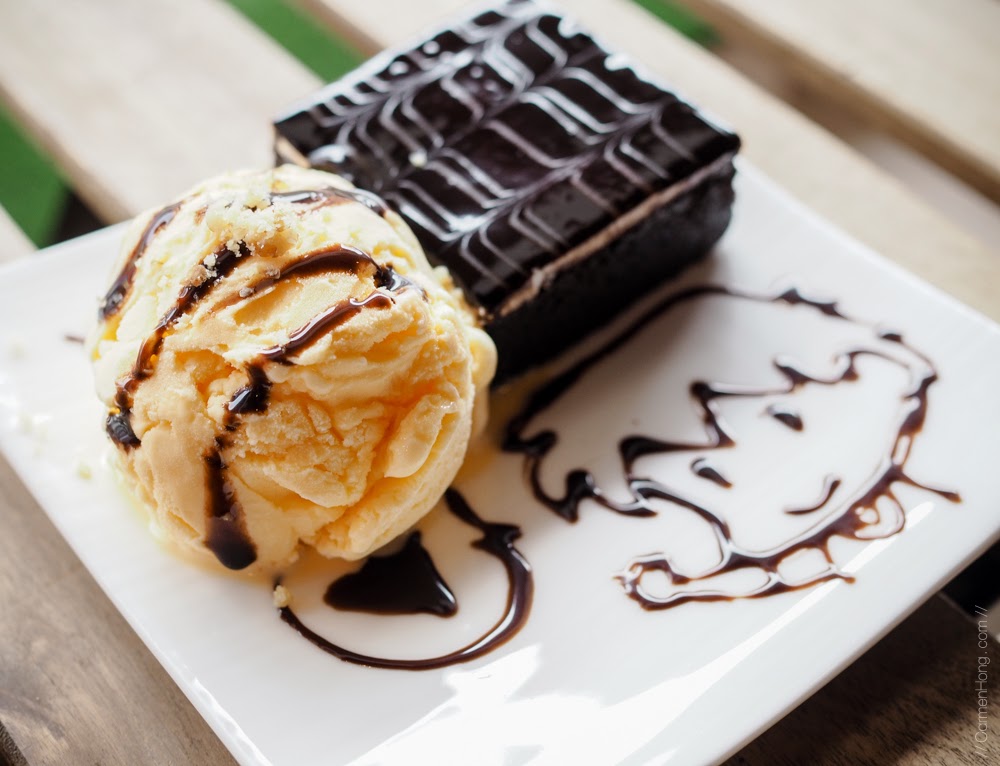 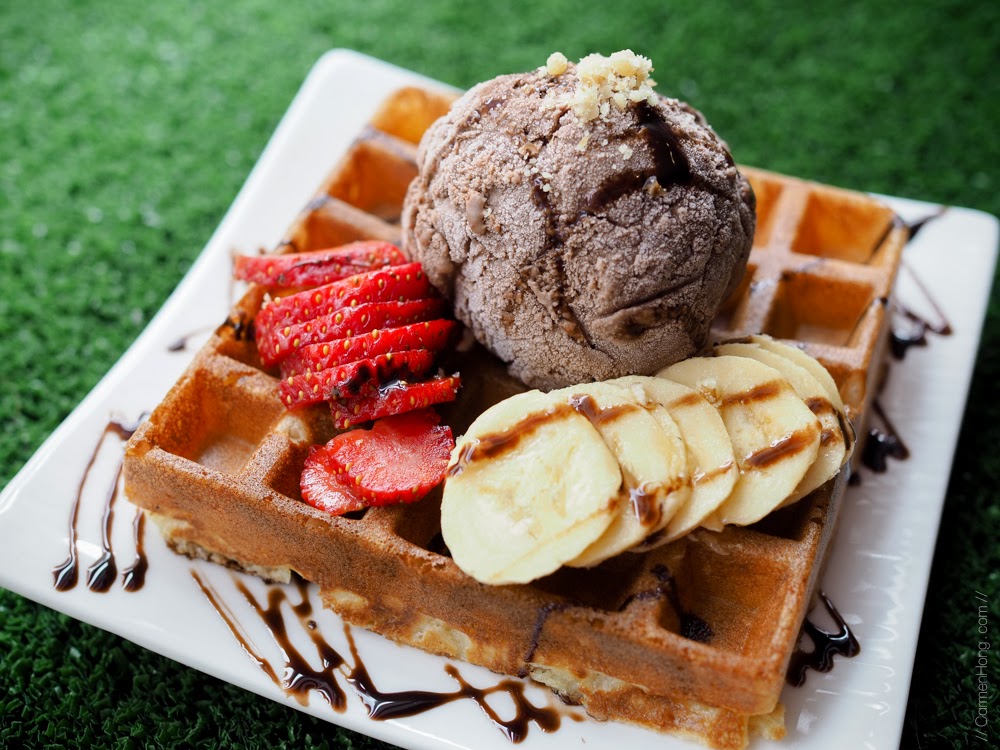 Waffle with Strawberry Ice Cream and Fruits | RM12.90
There are a lot more selections of cakes and desserts to choose from but of all there is available, my top two picks would the Chocolate Mud with Homemade Vanilla Ice Cream and the Waffles! Just as when there was a burger trend going about, it would appear that waffles are the trending food for now. So, do hop on over to Bmon Cafe!
* * * * * * * * * *
// Bmon Cafe //
No. 8-1 Jalan PJU5/20B, Petaling Jaya
03-6158 9993
Open daily from 11am to 11pm
* * * * * * * * * *
I’ll like to end this post with a couple more pictures of the food that I took, which are of different angles. The pictures in this post are taken with the Olympus PEN Lite E-PL7, or better known as the EPL7 together with my favourite Olympus M.Zuiko 25mm F1.8 Lens. These were taken with natural sunlight, as my only source of light and edited with Lightroom on the JPEG files, since my version of Lightroom doesn’t support the EPL7 RAW files yet. 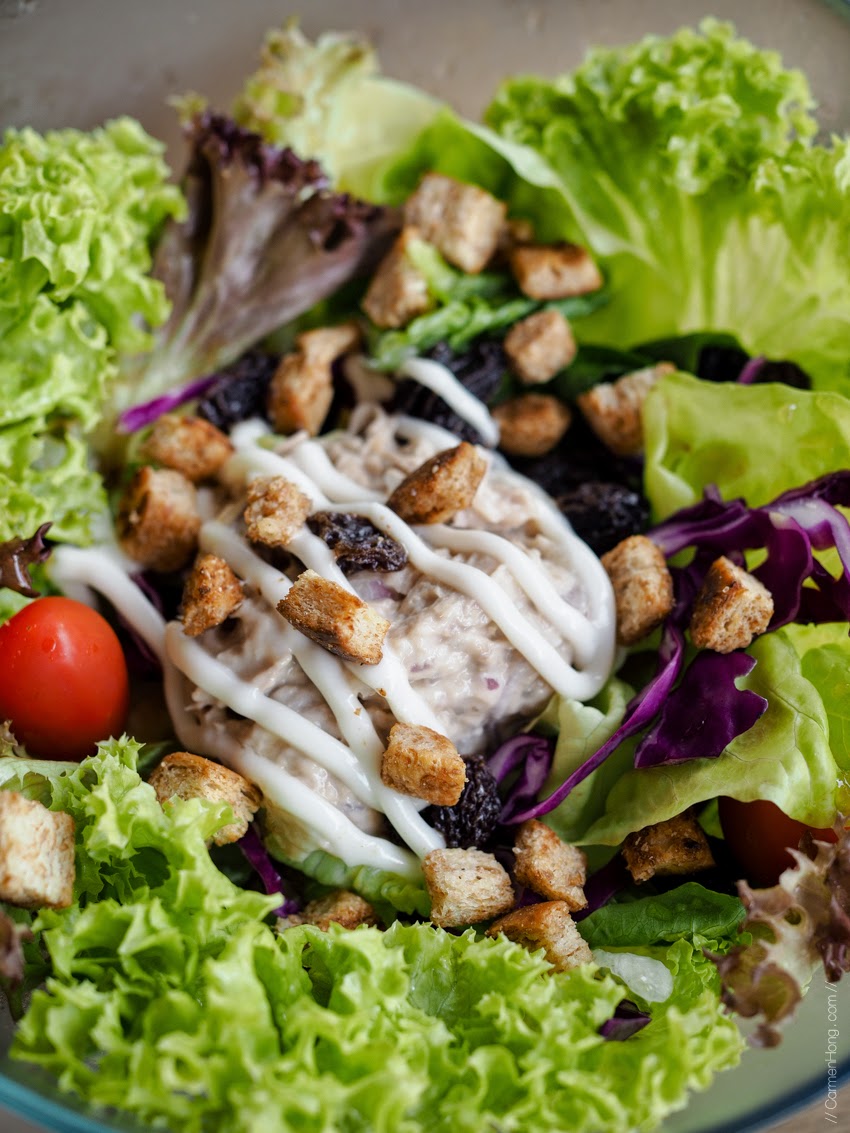 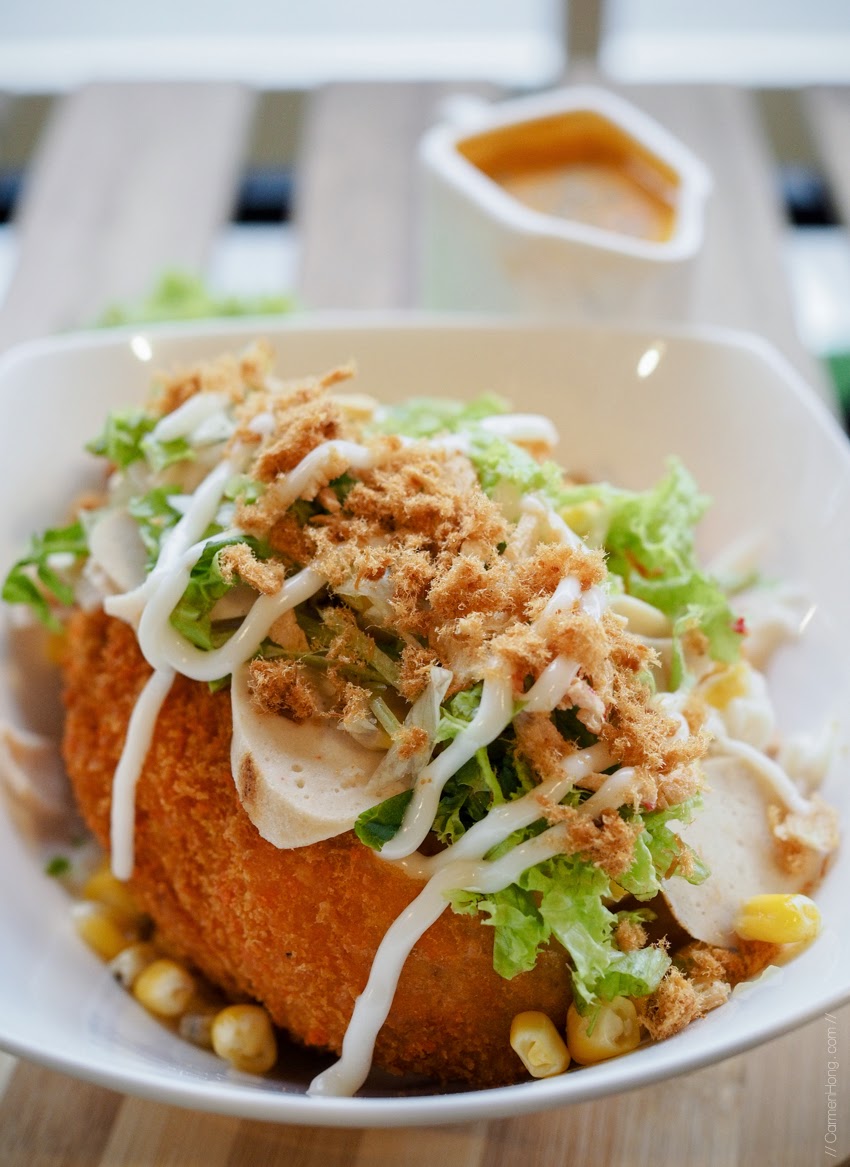 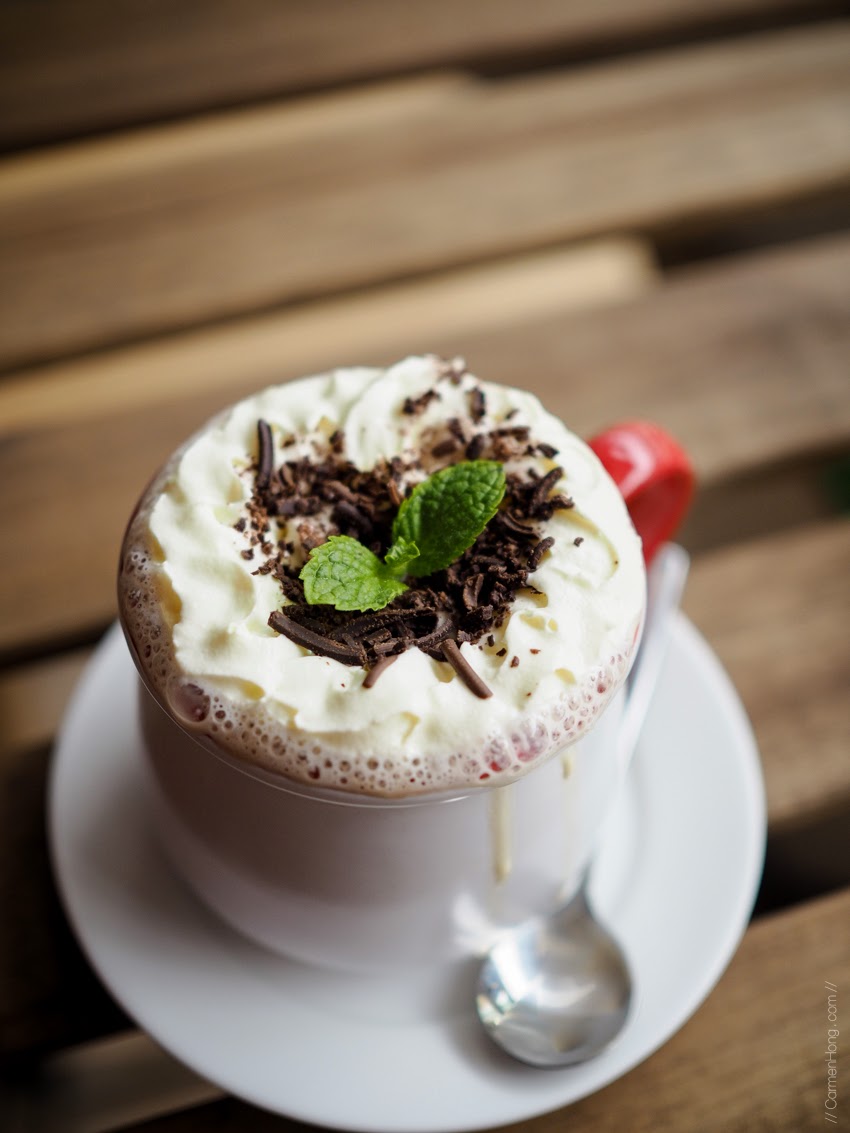 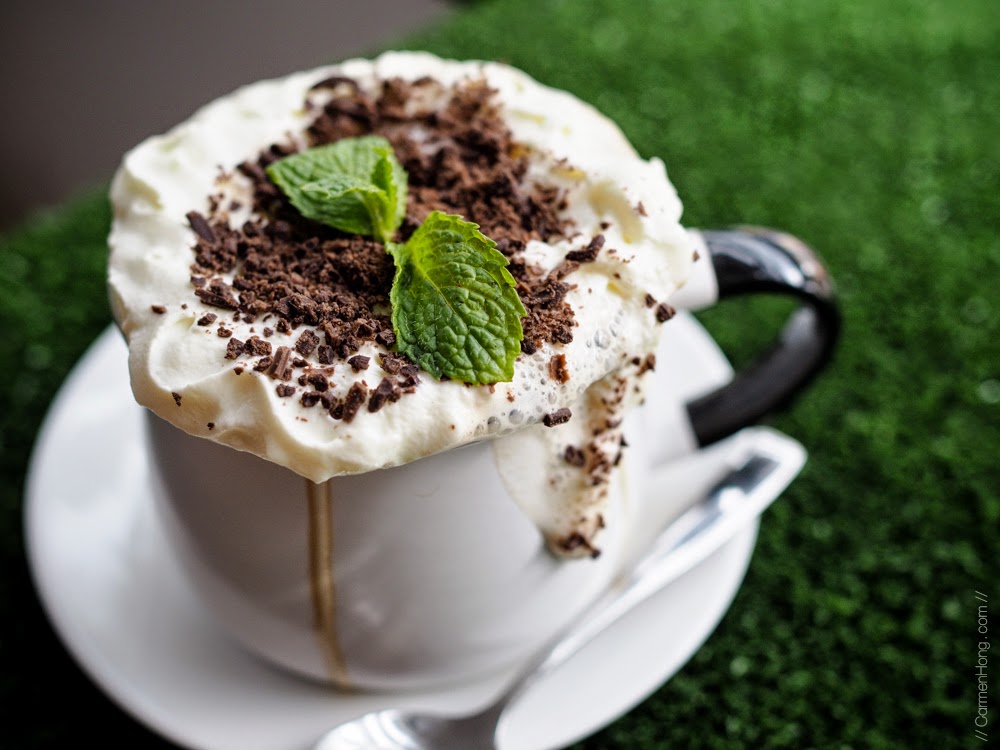 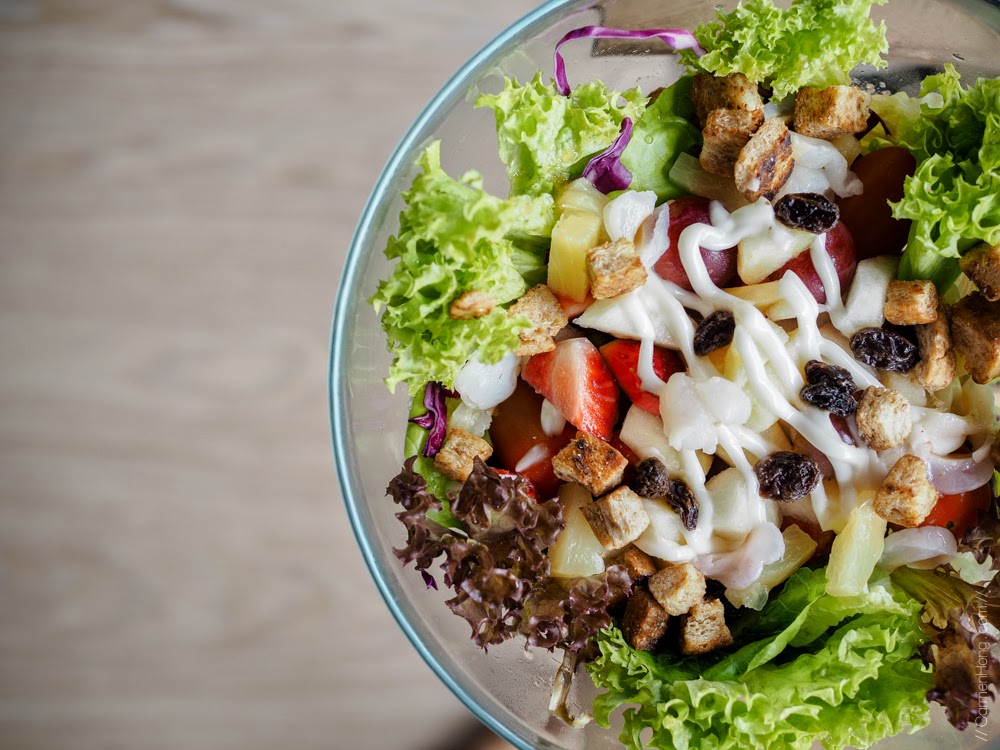 Snaps: Selfies with the…

Review: Why I love the…

Review: Why I love the Olympus PEN Lite E-PL7