Brotzeit German Bier Bar is not a restaurant that I am unfamiliar of, in fact I have been meaning to pay them a visit. This is no thanks to my syndrome of “forever-craving-for-sausages”. Frankly, it is uncurable but its symptoms can be lessen by “nom-nom-ing” on delicious sausages. And this brings me back to how I know of Brotzeit, simply because I heard that the sausages and the pork platter there were really good.

As usual, I have been meaning to pay them a visit but it’s always nicer to go there in a crowd, and finding the right party to go is quite a hassle sometimes with our ever clashing schedules. It’s a better idea to visit in a crowd because Brotzeit has recently been offering really good deals via a couple of group-buying websites for their “Brotzeit Platter”. Just the other day before I was in Brotzeit, a friend of mine posted a picture on Instagram of the “Brotzeit Platter” that she had (on a discount), which was humongous but looking so delish. I knew I had to try it then.

But lucky lucky me because Nuffnang Tastebuddies were invited to Brotzeit to sample some of their signature dishes, and the gluten me was like “Yes, yes, I have to go for this”. So, here’s a simple lay down casual food post on the food we had while we were there. 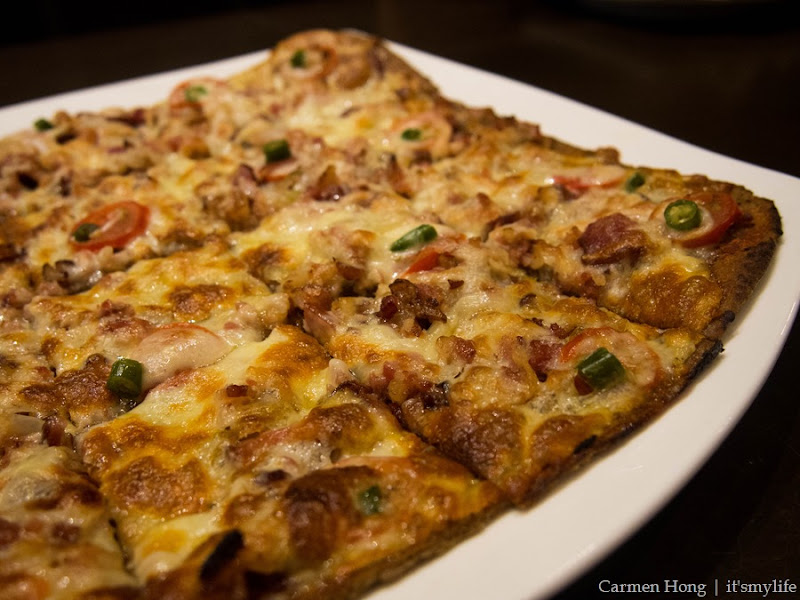 We started off lunch with a Bacon Pizza, which was a crispy thin pizza with the usual tomato sauce, mozarella cheese, onions, vine ripened tomatoes and two ingredients which was the deal maker for the pizza. Of course, anything with bacon would taste great but what is even more unique was the Malaysian touch added to the pizza, with the usage of tiny spicy green cili padi. I like how the pizza was thin, yet crunchy (best eaten while hot) and the tiny burst of spiciness with every bite of chili padi. The pizza itself isn’t spicy, only if the slices with cili padi then it’ll be spicy. 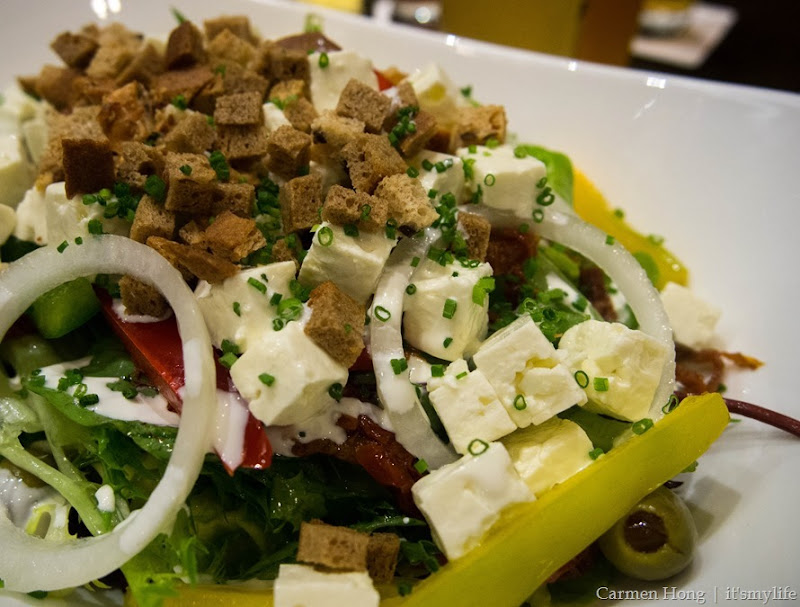 Then, it was followed by a generously huge serving of Feta salad. Feta is actually a type of aged cheese produced from sheep’s milk and the German word for it is schafskäse (pronounced as schafs•kä•se) which when translated means sheep’s milk cheese.We can just call it Feta cheese. The salad is made up of various salads leafies, red bell peppers, semi-dried tomatoes, onions, olives, garlics, croutons, feta cheese and tossed with house dressing.

I like how the salad was not overloaded with zealous amount of dressing, it was kept minimal with hints of the dressing. That is just the way I like it, and the combination of the cheese and sun-dried tomatoes were just simply lovely. It was pretty refreshing to have that, and I think I wouldn’t actually mind just having that. Sometimes, not all the times because I’m practically a carnivore most times. 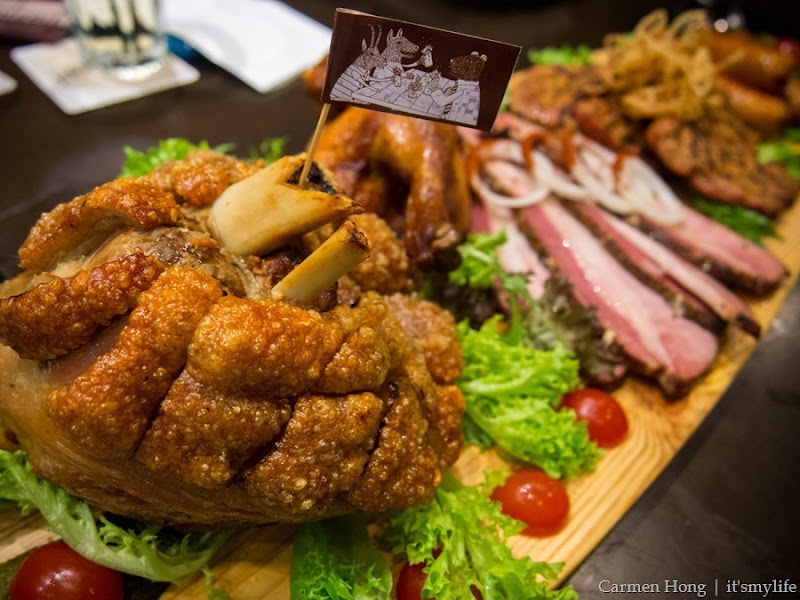 When the platter was served, I was like “woah” inside my heart because I didn’t want to sound so jakun but I was sure I heard someone muttered “wow” too. It was served on a long wooden platter. It filled the whole table for four persons, that would roughly give you an idea of the length of the platter. The Oktoberfest Platter is specially crafted by Chef Helmut, Brotzeit’s native Bavarian chef which feature Brotzeit’s Signature Pork Knuckle, lumberjack steaks (pork chops), garlic pork sausages, oven roasted chicken and gipsy bacon. The platter is served with two sides of sauerkraut and potato salad, which was a pretty generous serving as well. The platter serves 5-6 people, but even with 9 people on the table we couldn’t finish the platter. Maybe it was because most of us were girls with small appetite. :3

Chef Helmut begin by helping us to de-bone the pork knuckle which was really simple, and for the chicken, you’ll need to cut it into smaller pieces also. The pork knuckle in all honesty, looks mighty glorious which is why it is their famed signature dish anyway. Having said that, it would be expected to have higher expectations on it, only to be mildly disappointed. The skin was crispy, but it wasn’t like the air crisp you would taste when the pork knuckle has been fried long enough. Probably this was because it was to avoid being over fried and over cooked. In terms of the meat, it was tad dry, but flavourful nevertheless. Maybe it would have been best taken with the brown sauce. 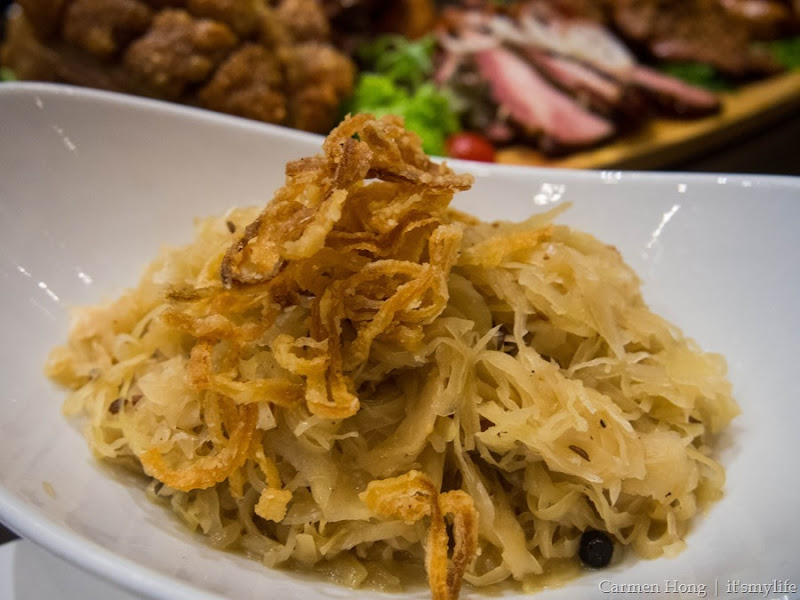 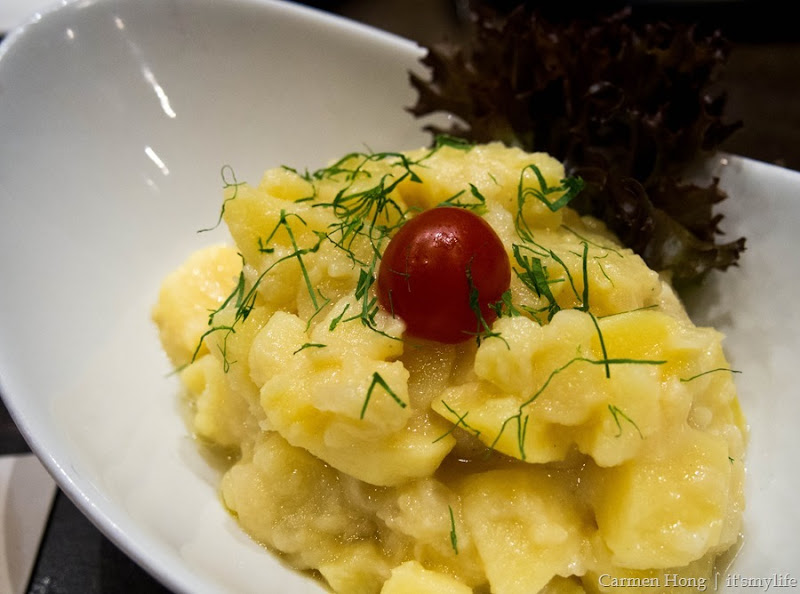 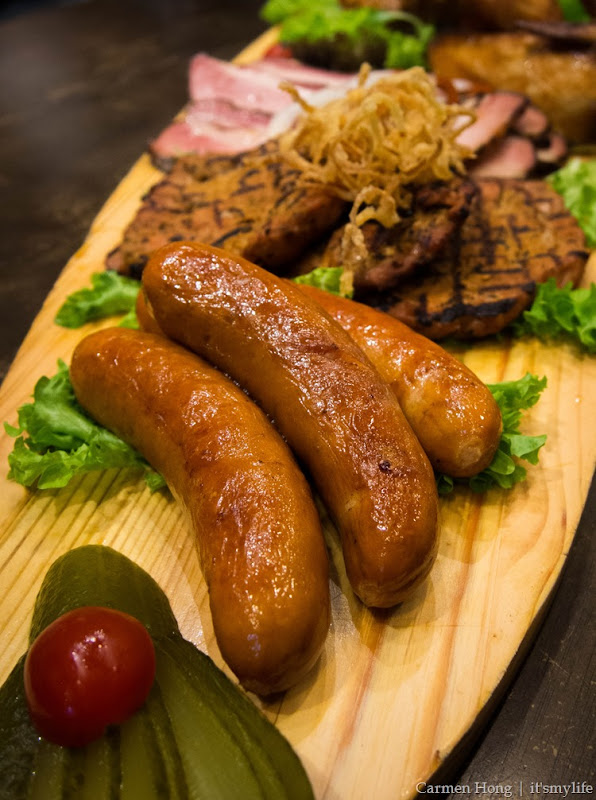 I actually started off with the garlic pork sausage, (duh, no surprises there), which got me hooked with just one bite. You won’t be tasting much of the garlic, but it was bouncy, chewy and flavourful. It’ll leave you wanting for more. 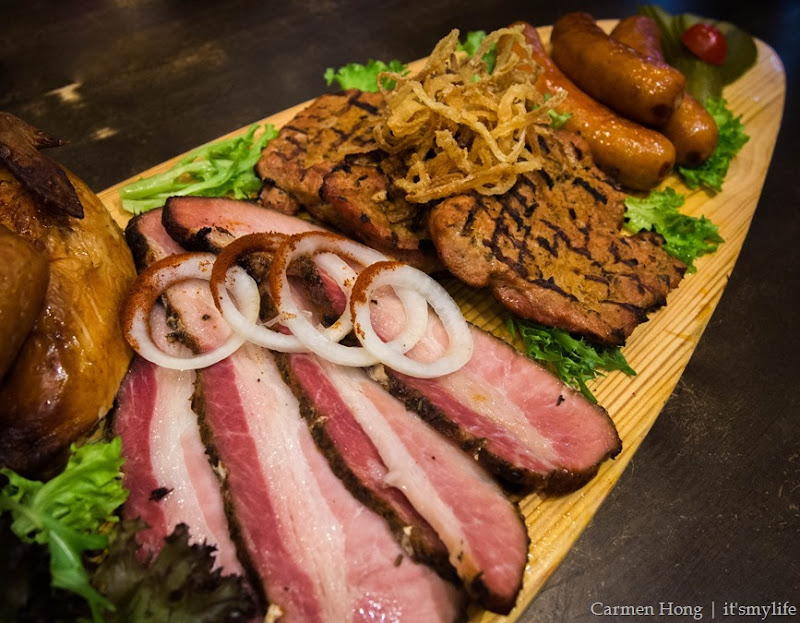 Then, I had the gipsy bacon which took me surprise because it was so damn good. A closer look at the bacon and see you see the fatty layer on the bacon, except it didn’t feel like fats. I have this thing against fats, because they taste like eating white chunks of cold oil. But this just melted in my mouth and coupled with the meat on the bacon, it was enough to make me go “oh-la-la”.

The charred steaks behind the bacon, are the lumberjack steaks which as dry and charred as it looks is really dry. The name sounds way more appetizing than it tasted. Probably, dry pork chops suit it better. (By the way, quick Google search showed me a juicy, fat, slab of lumberjack steak and I wished I had those instead). Last but not least, is the oven roasted chicken which looks yummy, and evenly roasted. Something I wish I could try to roast one day. Taste wise, I look the skin! It wasn’t oily as all, perks of roasting a chicken. And the chicken meat tasted like well marinated ones.

Shall we move on to desserts now? 🙂 If anything, I think the desserts here impressed me more than the food actually. Which I know is probably surprisingly, but you’ll see why I said so anyway. 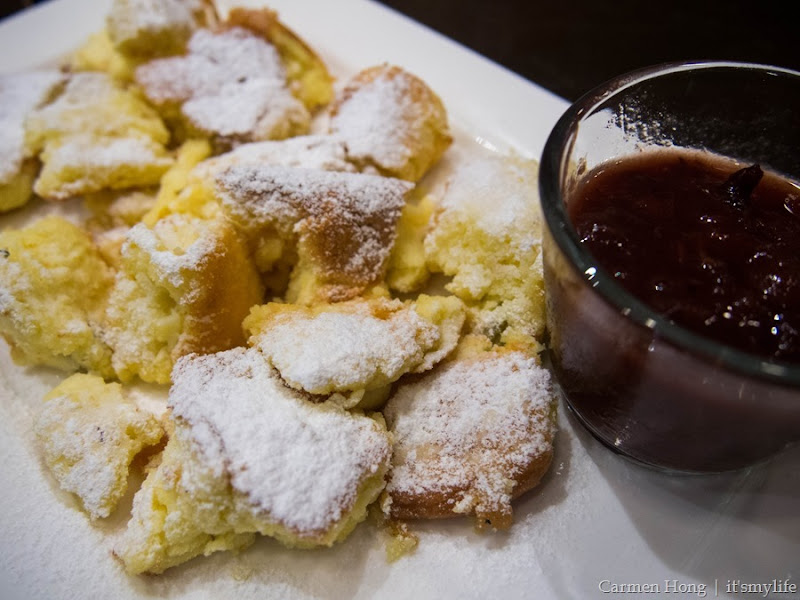 If I hadn’t read the menu and solely relied on my tastebuds, I really couldn’t have known that this was shredded pancake. It didn’t taste much like pancake maybe when topped with icing and eaten with plum sauce, rum and raisins. It’s fluffy light, but not something I fancy much. 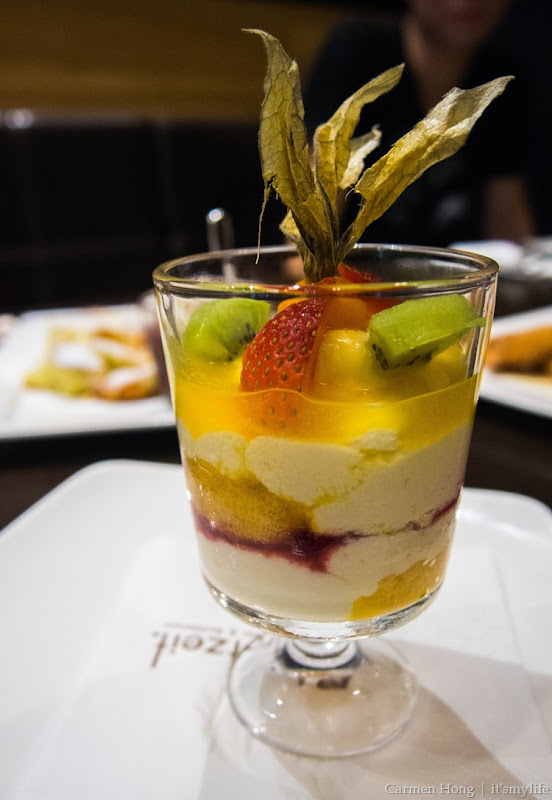 This was surprisingly refreshing for a dessert, it was one of those food that with the first bite you’ll go [O.O]. I said that because it totally took me by surprise. I know it was one of those pretty little nice glass of desserts that I stay away from at the buffet lines because of how usually artificial it taste like. But this, man this is made from layers of rum and orange sponge fingers and yummy fresh cream. The sponge texture is rather unique on the tongue too btw. 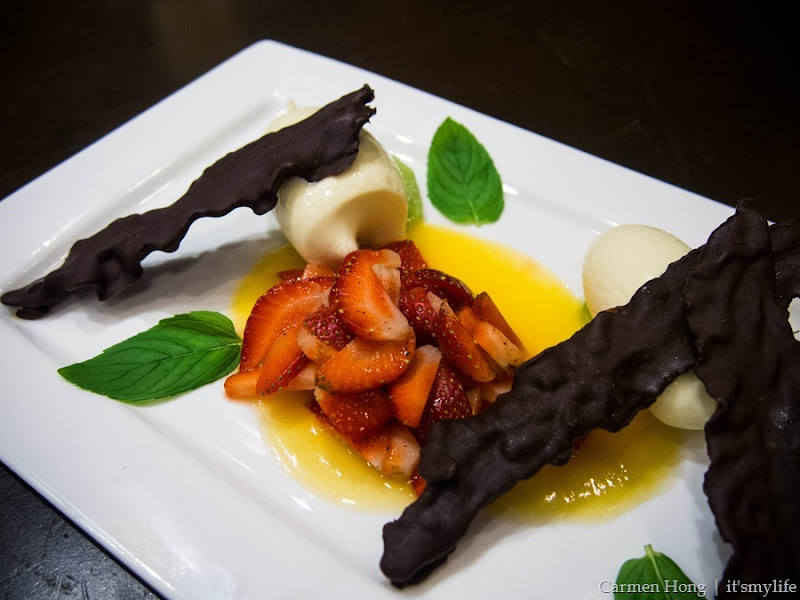 As the name suggests, this was a mish mash of salty and savory sweet. It’s something unique, I would say extraordinary almost and worth a try at least once. But not everyone would enjoy it. Simply because those chocolate strips are actually crispy fried bacon coated with chocolate, and those vanilla ice cream look-a-like is actually white chocolate mousse and the strawberries have pepper sprinkled over them, marinated with lemon and then doused with apricot sauce. It really is a celebration of all flavours. This itself is an experience eating it. But oh-so-yummy-memorable! 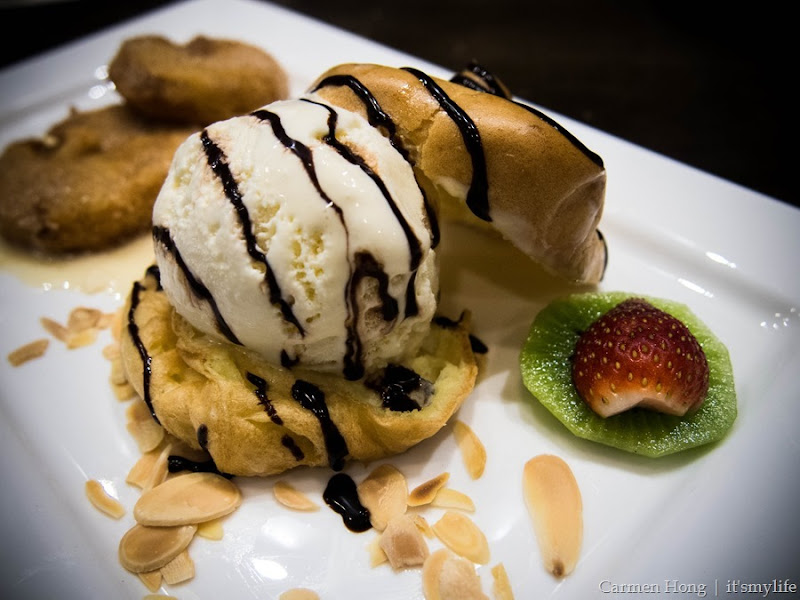 Yums, this looks yummy! Again, I didn’t know the names of the pastry paired up with the ice cream and the chocolate sauce. It turns out to be chocolate profiterole with ice cream. And in the far end corner is the cinnamon sugar apple fritter with vanilla sauce. Overall, I’m not much of a dessert person (I just like photographing them) so my verdict would be it was just okay.

If you’re interested in the Brotzeit Oktoberfest Platter, that would be available from Sept 21st till October 31st for RM258++.

As always, Brotzeit will be hosting Oktoberfest at their two outlets and the dates have been scheduled for 2nd, 3rd and 4th October 2013 at Mid Valley and on 10th October 2013 at Sunway Pyramid. Reservations are encouraged as seating is limited to 200 covers per evening and advance purchase of Entrance Tickets are recommended at RM50nett per person which includes a pint of Oktoberfest bier and a chance to win a range of attractive lucky draw prizes from dining vouchers to air tickets.

Here are the address for each outlet: