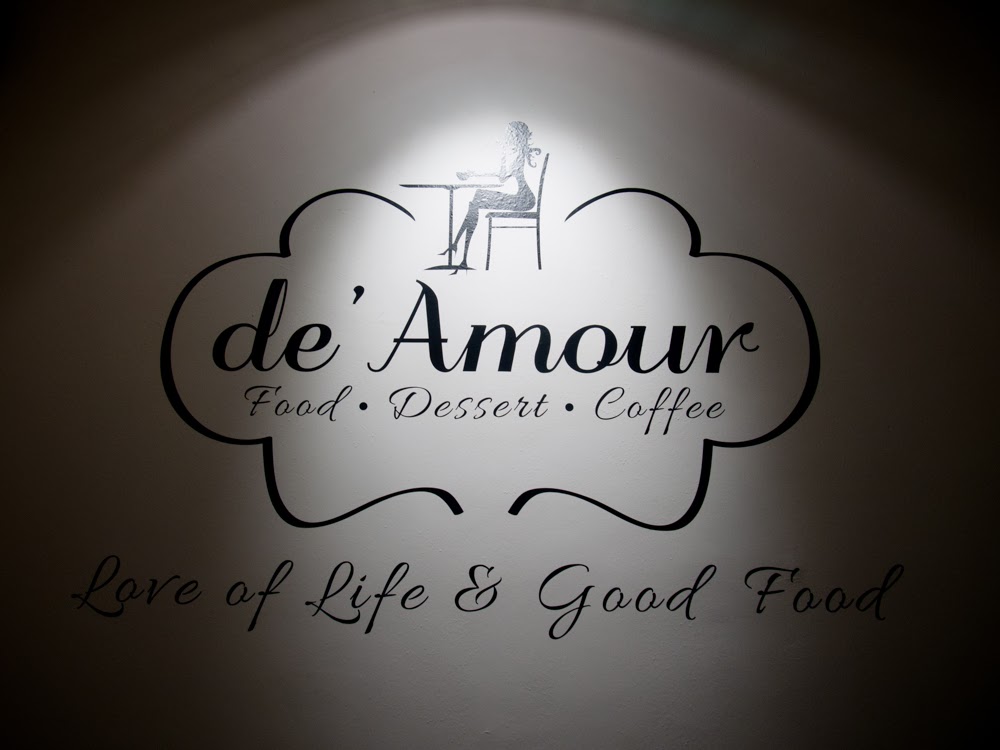 When I received the invitation to review the De’ Armour Cafe, I had no idea it was located near Sunway Giza or that it was in the heart of foodie haven. It is only when I arrived at the area, to realize that every passing shops was either a restaurant, a cafe or a food chain franchise. But like all foodie concentrated areas, parking can be quite a nightmare. At some point, it was jammed to get into the roads and then it was a hassle to try to get a parking. Lucky for me, because I only had to circle one big round before getting a slot.
Okay, putting those comments aside, let us focus on what is also important and it’s none other than the food itself. This restaurant is little more special than the rest, because the chef (Miss Jennifer Yap) is actually a lady and she was the Miss Tourism Pahang 2011. How about having a beauty pageant winner cook for you? I have to honestly say that I am impressed by that idea itself.
* * * * * * * * * * 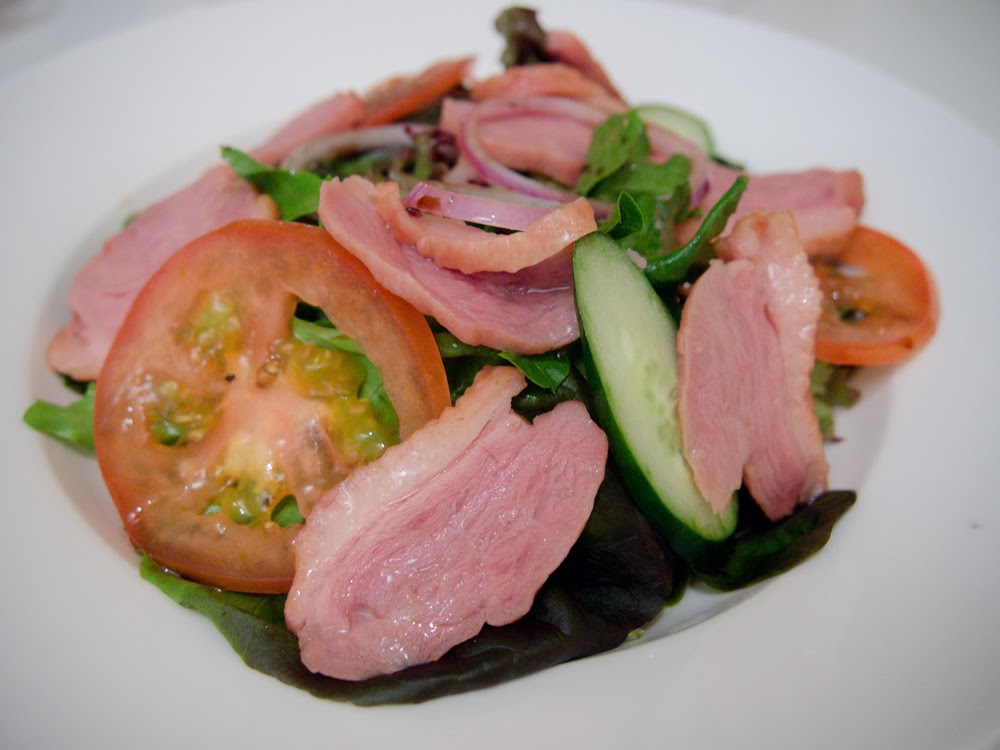 Smoked Duck Breast Salad | RM15
We kicked things off with the Smoked Duck Breast Salad, and this would be my first time tasting smoked duck. One bite in, and I’m hooked. This is almost like tasting bacon for the first time except this was definitely healthier. I love this, it’s almost no frills salad. But the smoked duck made it all so awesome. I did find the vinaigrette tad too sourish, otherwise this was perfection. 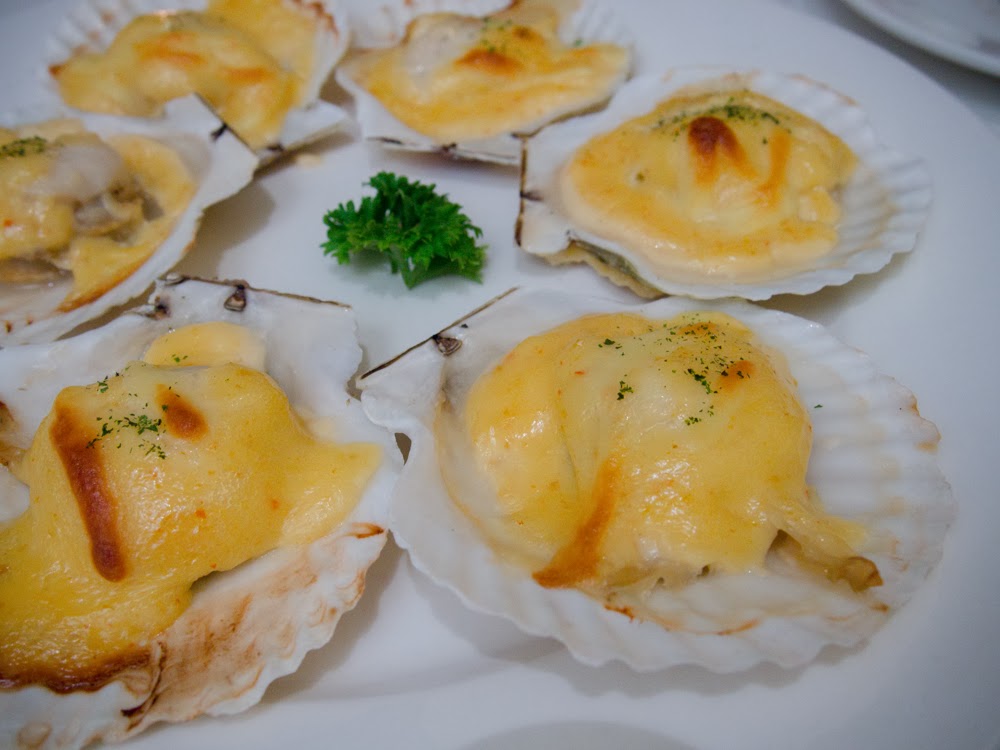 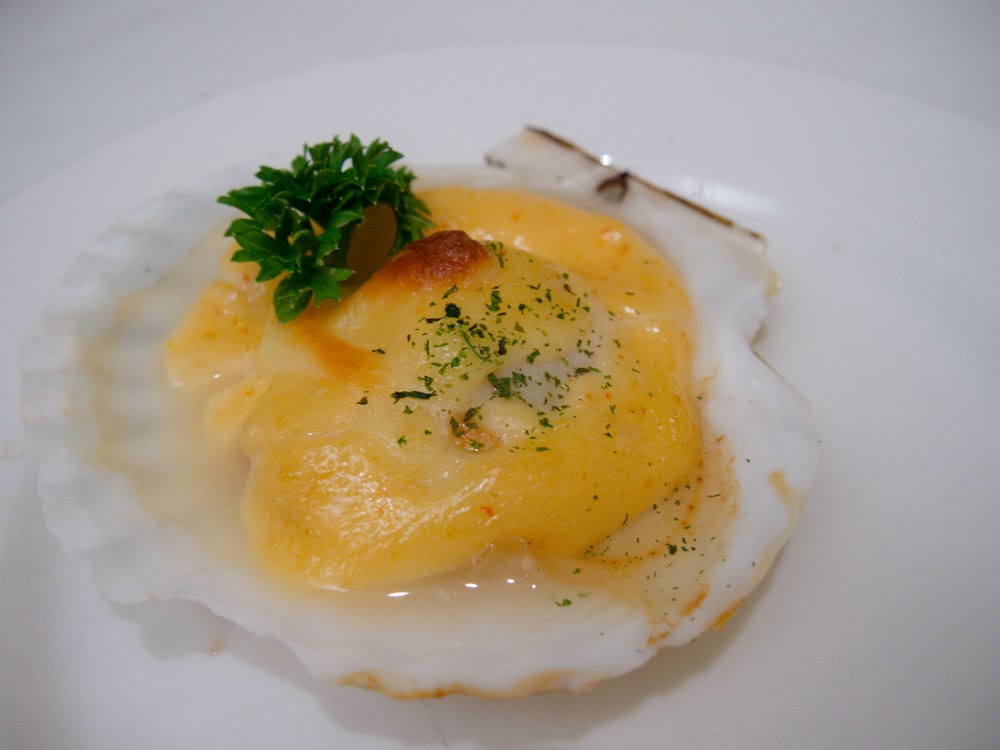 Baked Scallop with Spicy Cream Sauce | RM16
I have always have a weak spot for seafood, what more when you have cheese topped over it. This has yummy written all over it, and it was indeed delish. The spicy sauce gave it a tangy taste, one that you won’t usually expect to go along with scallops. There was however some watery liquid around the scallops’ shells although I’m not sure what they were. Could be the watery bit of the sauce? 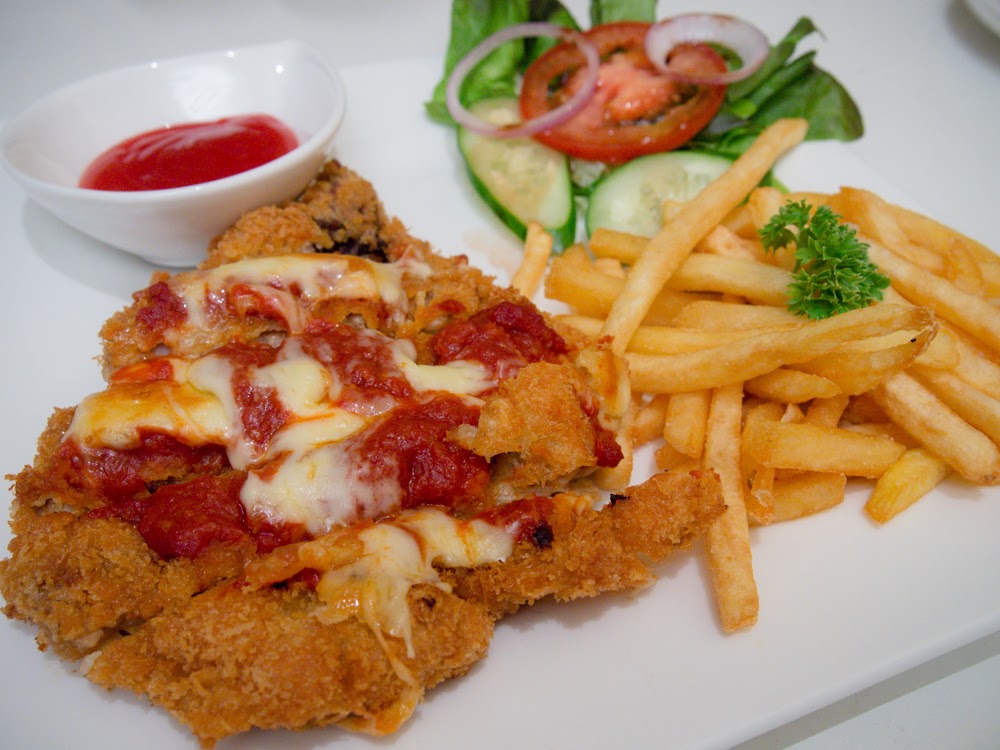 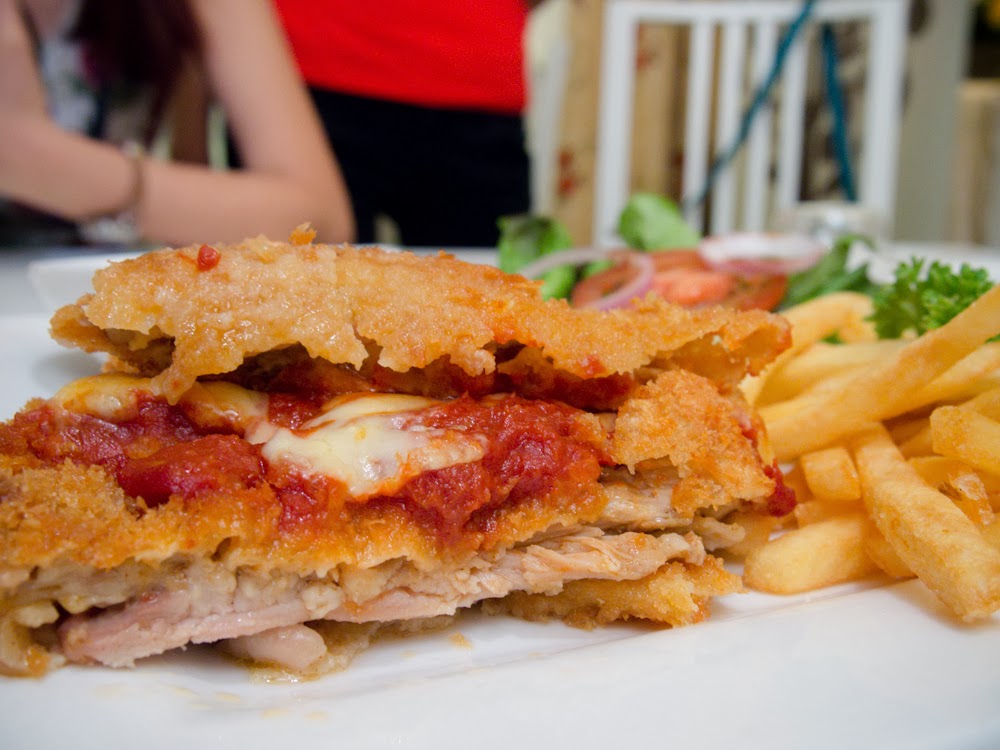 Chicken Parmigiana | RM22
Next was the Chicken Parmigiana, the one dish that is seemingly simple but actually requires skill, mad skills to get perfection. The batter should be light and crispy, while the cheesy tomato sauce coats over it while maintaining the crispy bits. This version was bit bland, on the sauce and the cheese over it. The batter was less than amazing, and in short, the dish failed to impress. It was pretty much chicken, with batter and the sauce, well they didn’t complement one another. 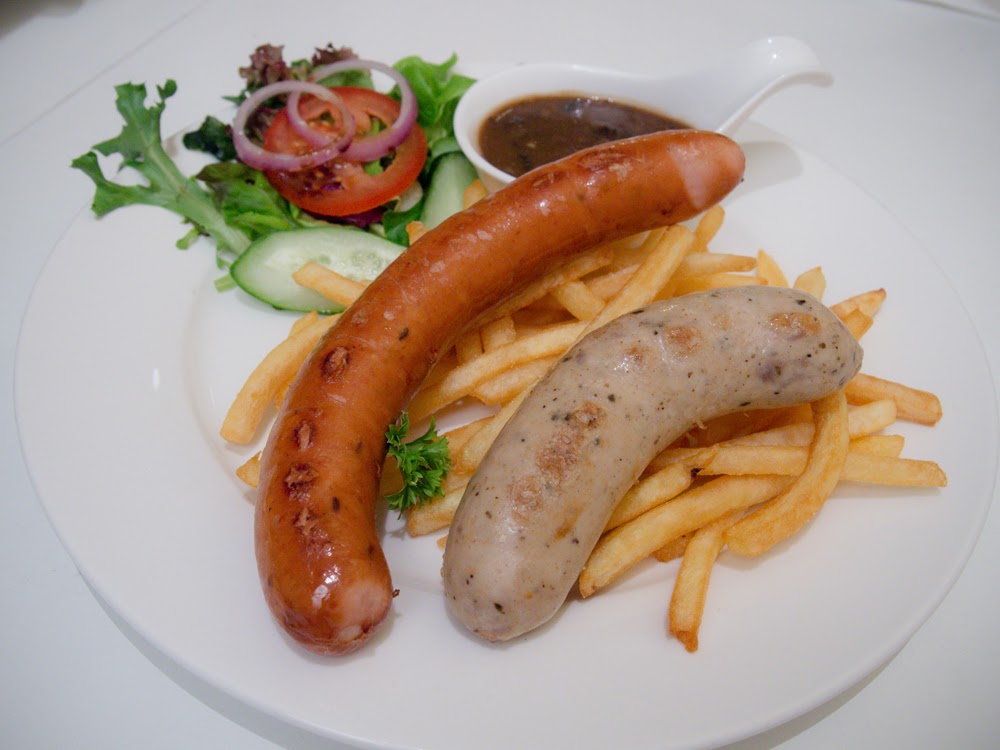 Porkie Sausage Platter | RM22
It will seem like I have a weak spot for everything when I say this, but I will say it anyway. I love sausages, always have and always will. That would explain my fondness for Euro Deli because they have one of the best sausages in town. The ones served here today, the Hungarian and Thueringer bratwurst have the chewy, super chewy wrap around the sausages. Personally I like that, so I quite enjoyed it. Taste wise, it was good with just the right flavour which means not too salty. 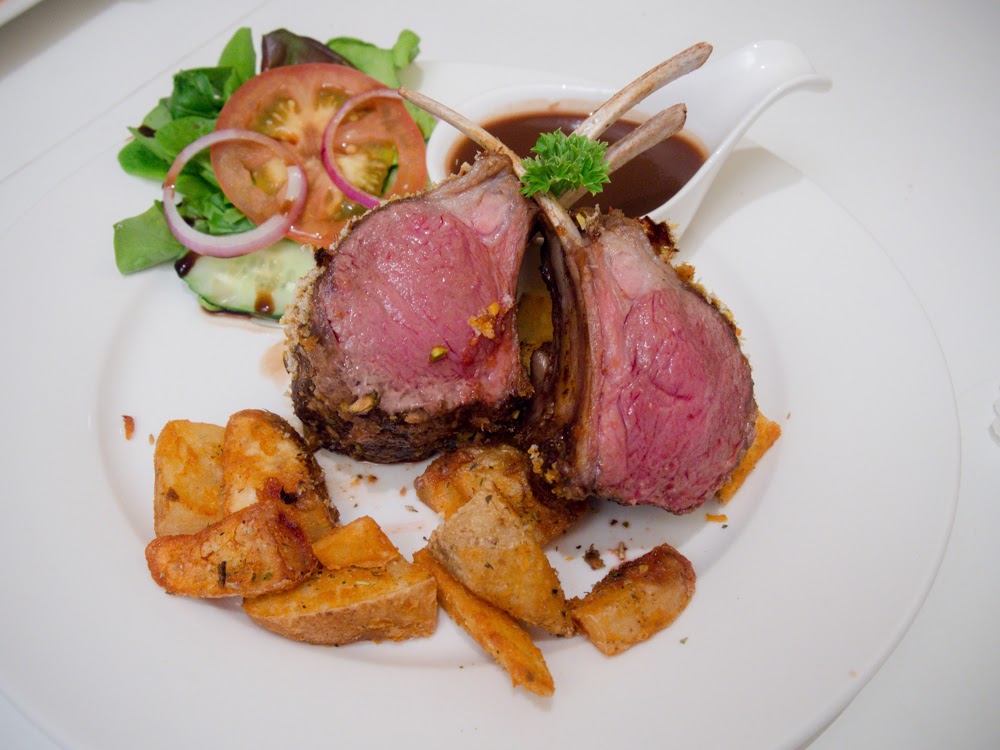 Grilled Fresh Lamb Rack with Crushed Pistachio | RM38
And as good as it looks, it was delicious too. The meat was tender and juicy, and cooked to almost medium-rare. The accompanying sauce had a very strong alcohol taste in it, I suspect red wine is used in the preparation of it. 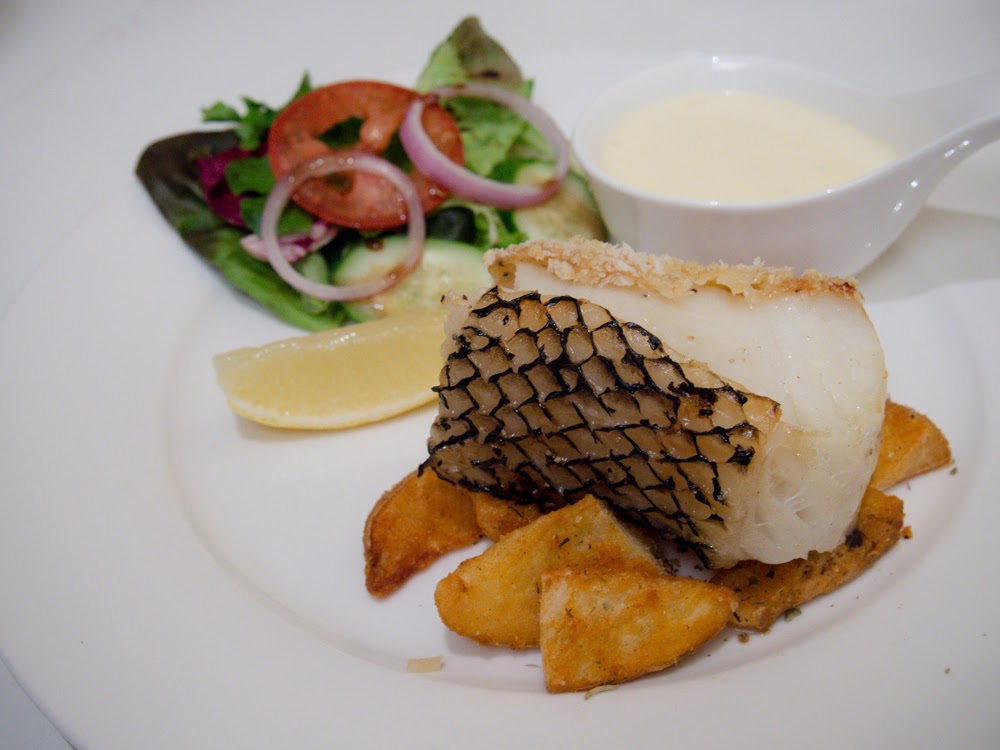 Baked Cod Fish with Lemon Butter Sauce | RM38
I love cod fish too! I once had this fish in TasteMIGF, and I had to get myself a second helping. Again, this dish was presented beautifully, with the cod fish resting on a bed of wedges. The portion of the fish though was very small. If I were to eat it like barbarian, one bite was all it took to gobble this down. Even for my tiny mouth. The sauce did little to complement the fish though. It was okay, but not fantastic. 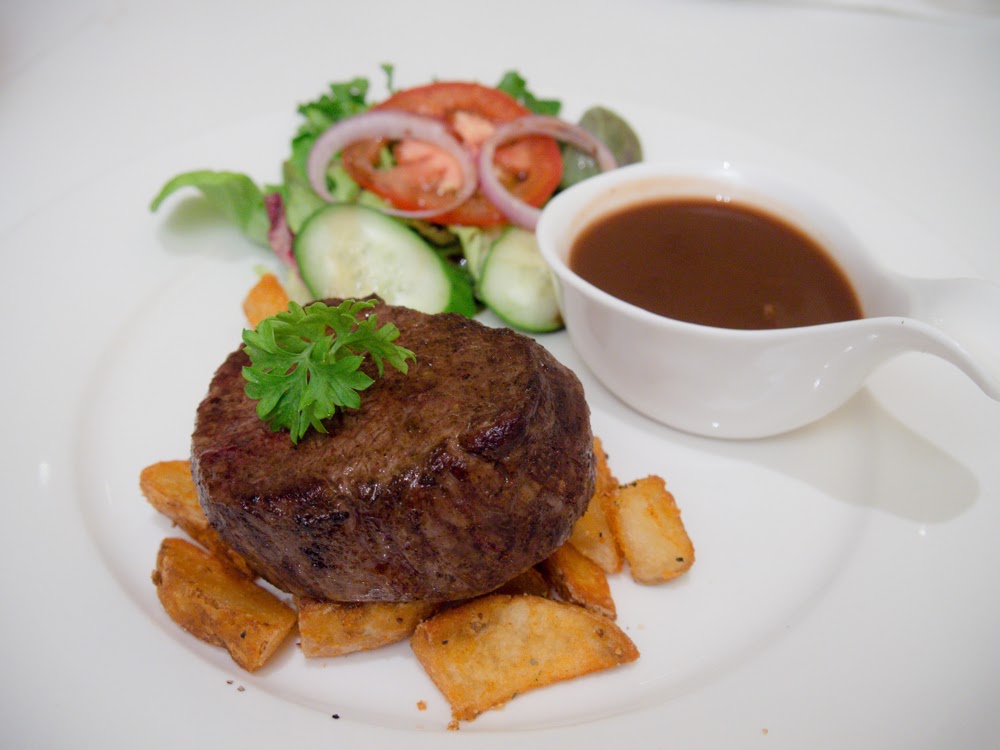 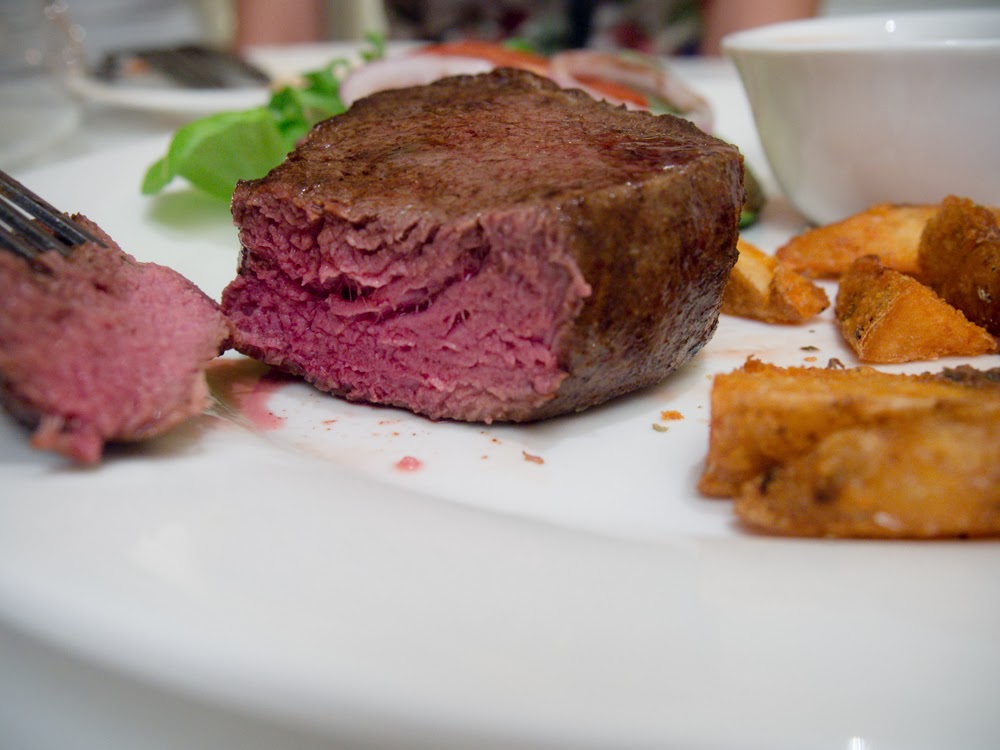 Grilled Tenderloin Steak | RM38
I’m not a steak person, really. My friend wanted to dine in BEAST and I was like, uhmm, no? Haha, but anyway, I thought this steak was actually pretty decent. Cooked medium rare, almost and served with the similar sauce as the lamb rack. Similarly, the meat was tender and juicy, with no hints of pinkish bloody water. I hate those, I really hate those flowing from the steak. Eww. 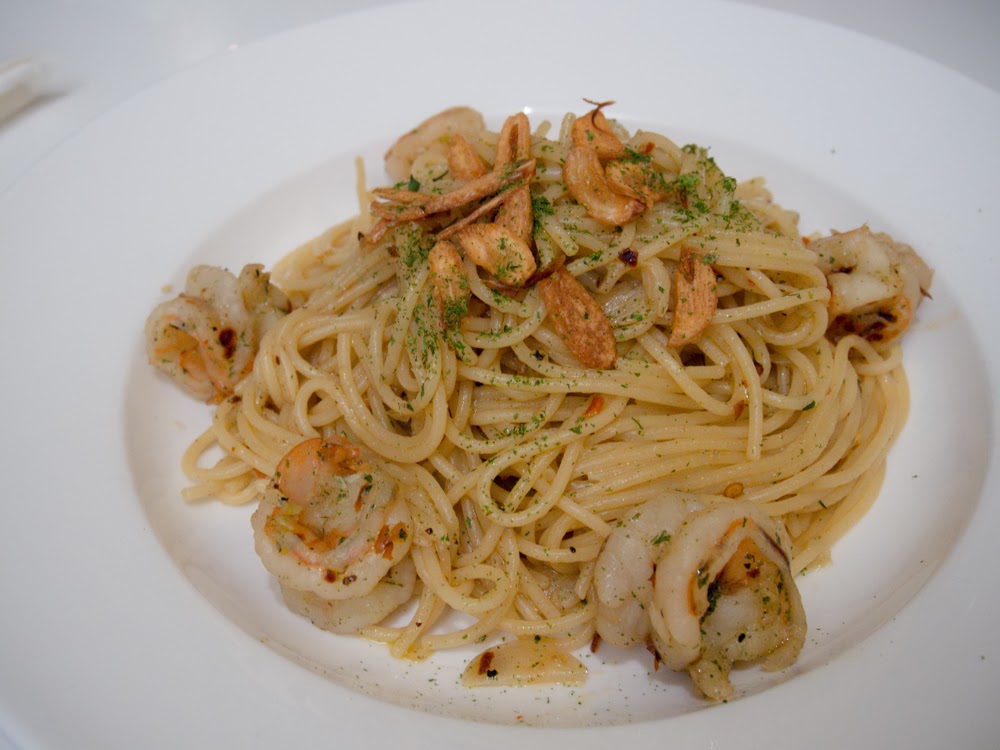 Aglio Olio with Tiger Prawn | RM23
Would you believe if I told you this dish was actually super duper spicy? It is unassumingly mild looking, and pretty much how a normal aglio olio would be. Except this was too spicy, but at the same time, I find the spiciness tad addictive. Although it was stated in the menu that tiger prawns were used, it looked rather small for me. 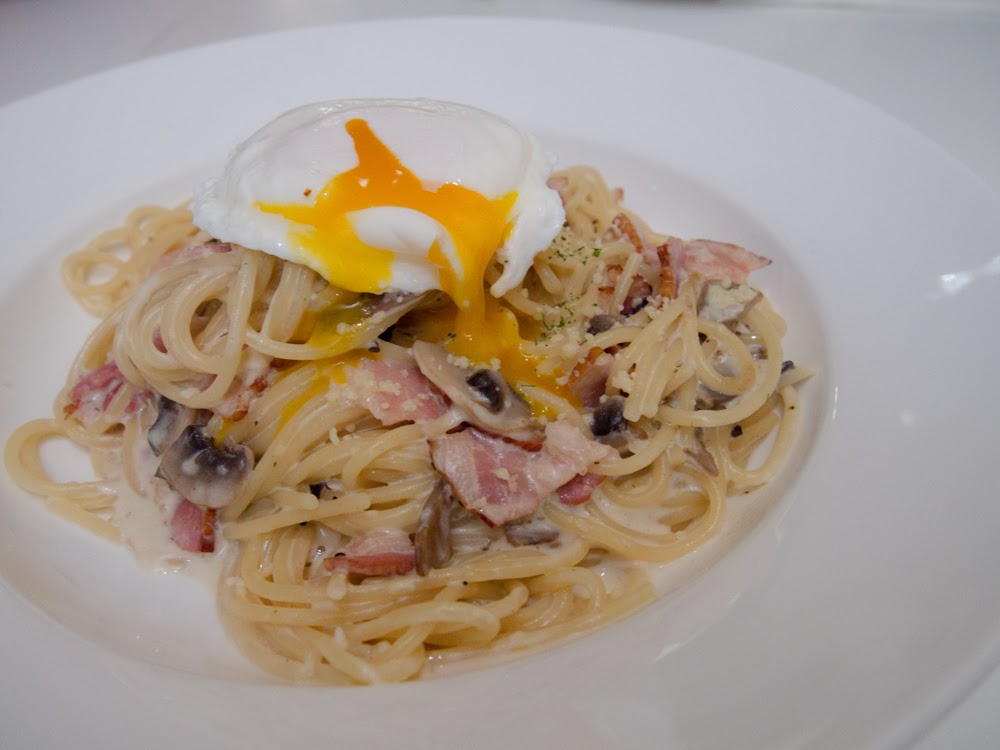 Classic Carbonara Spaghetti | RM23
Unfortunately, I have to say that this dish looks better pictured than what it actually taste like. While the poached yolk looks glorious, it was too cooked to have the runny taste for the spagehetti. There is nothing to shout about this dish, it’s really just another carbonara spaghetti. 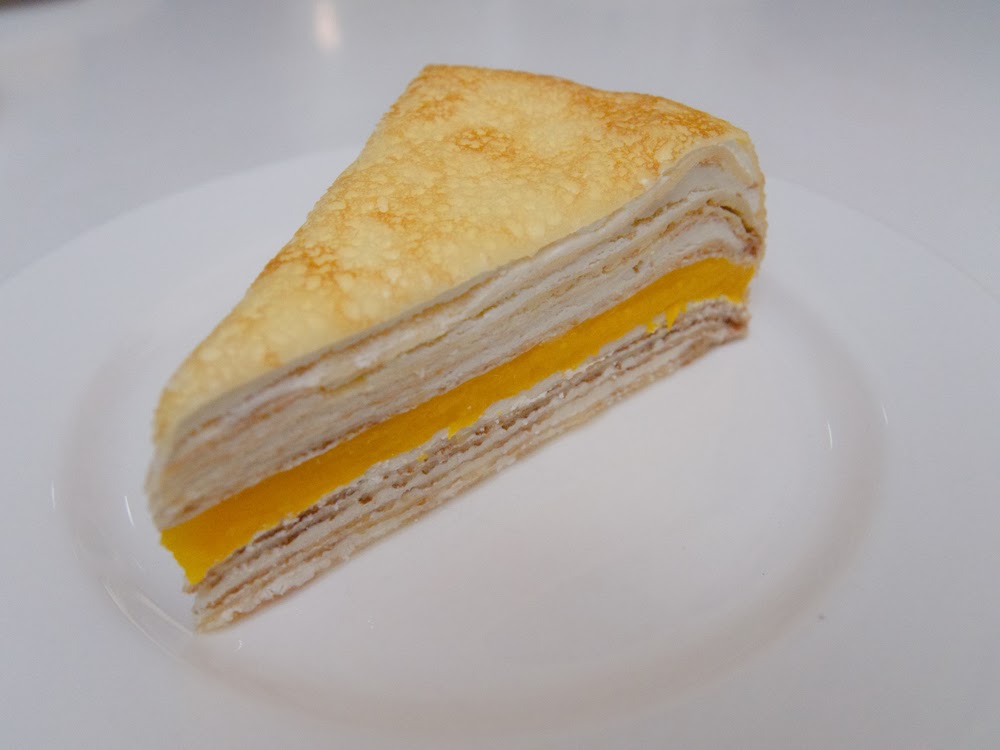 Mango Jelly Mille Crepe | RM8
This was my first time trying a mash of mille crepe with mango jelly, and I really liked the two different textures. This was something unique and it’s a fresh change to the mille crepe scene, where it had been over flooded with many cafe(s) offering it. 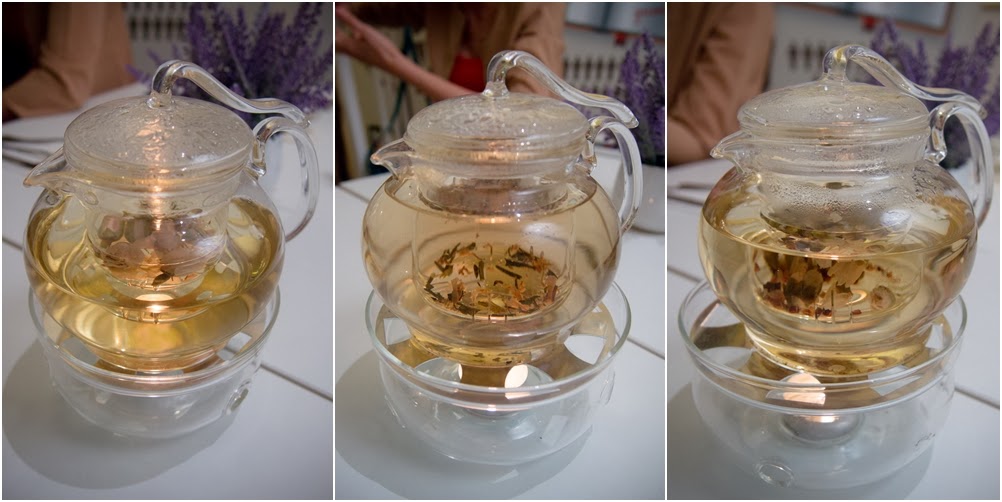