I first heard of the term, casual French dining during my visit to Foodlogy. It’s a French restaurant which is located beneath the Viva Residency condominium. Frankly, it was my first time coming across the term so I was indeed excited to try what kind of dishes that the restaurant would have.
The restaurant is spacious with a pretty simple, no frills decor to it. If you come in the evening, it’ll be a suitable place to chill and dine since it is rather quiet in the restaurant. (I’m starting to think, I should at least snap a picture of the interior so that at least it’ll be easier to illustrate how the restaurant looks like. Mental note to self.)
* * * * * * * * * * 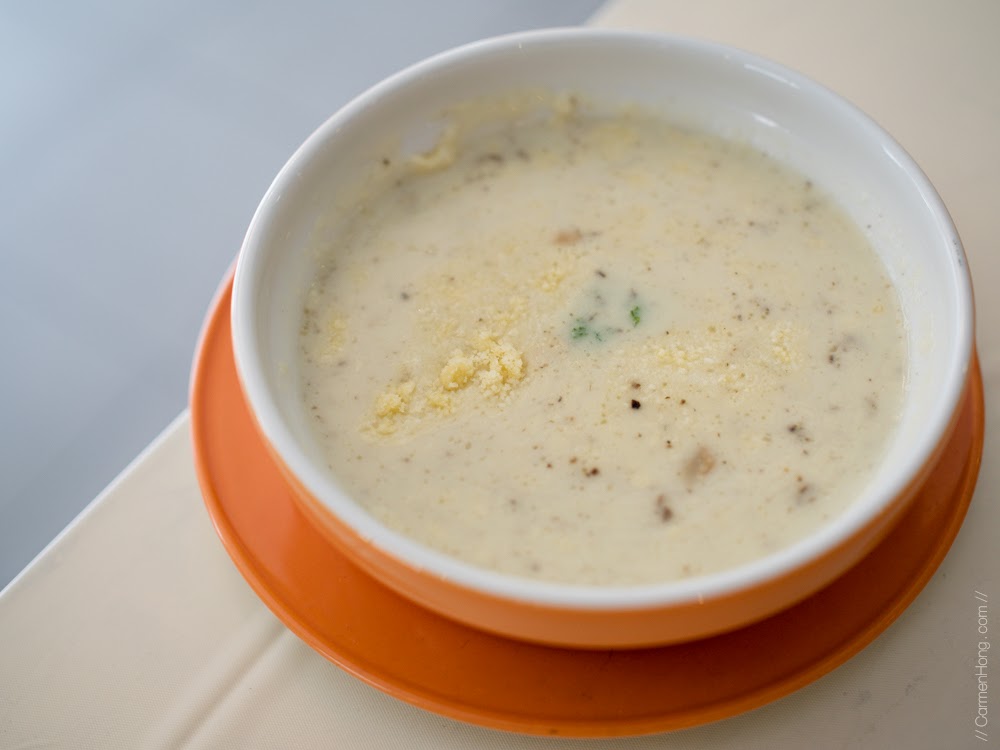 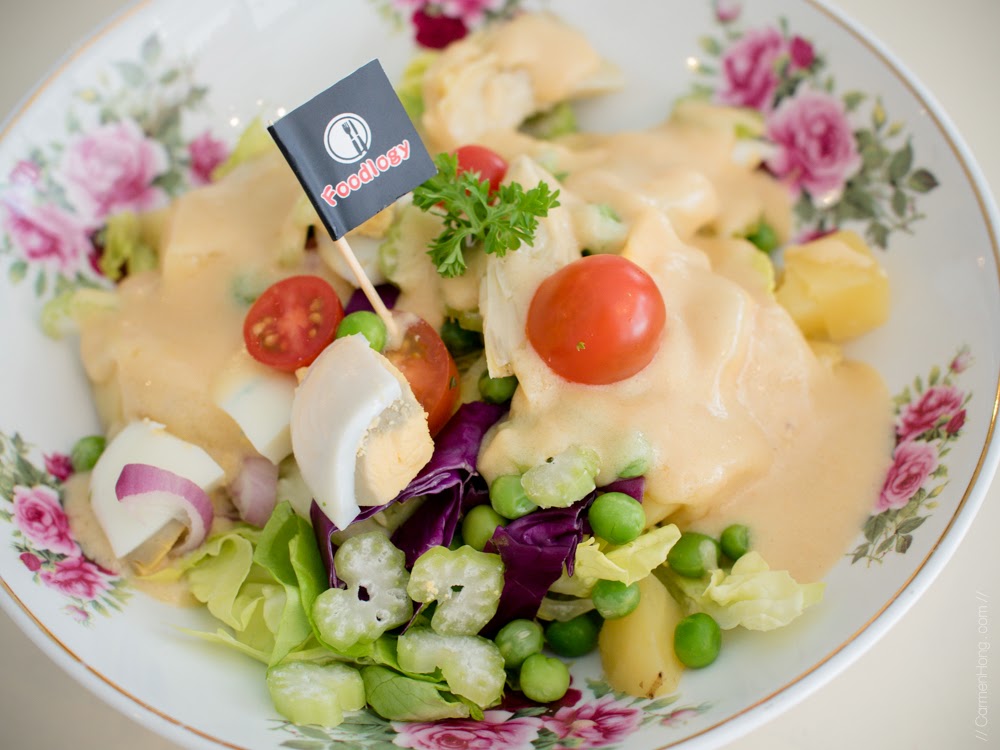 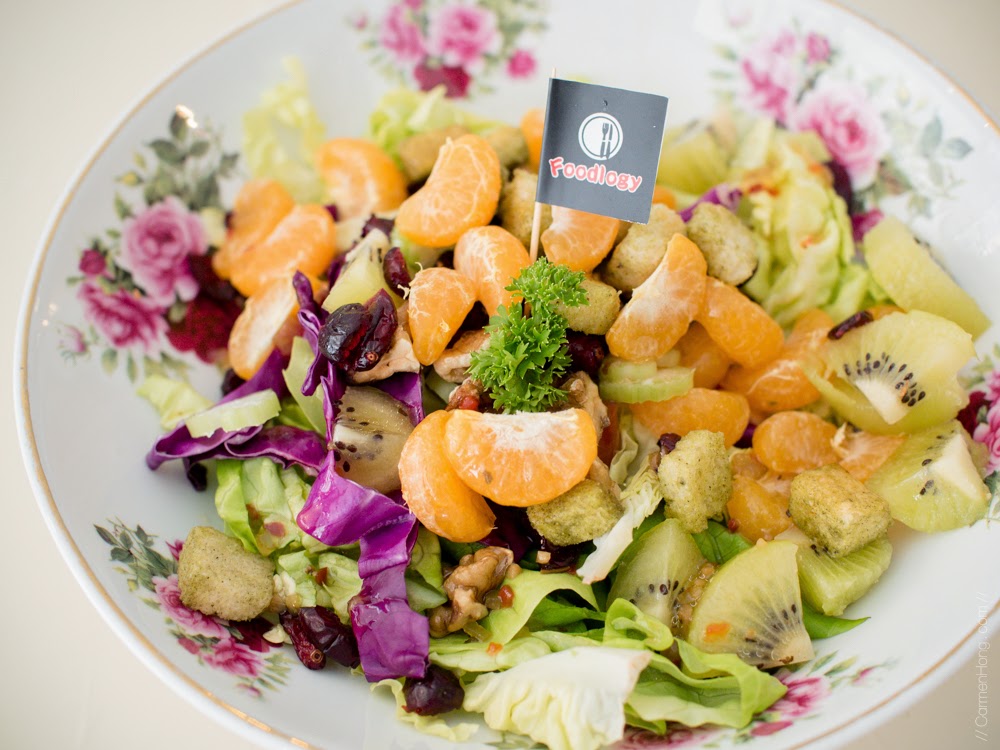 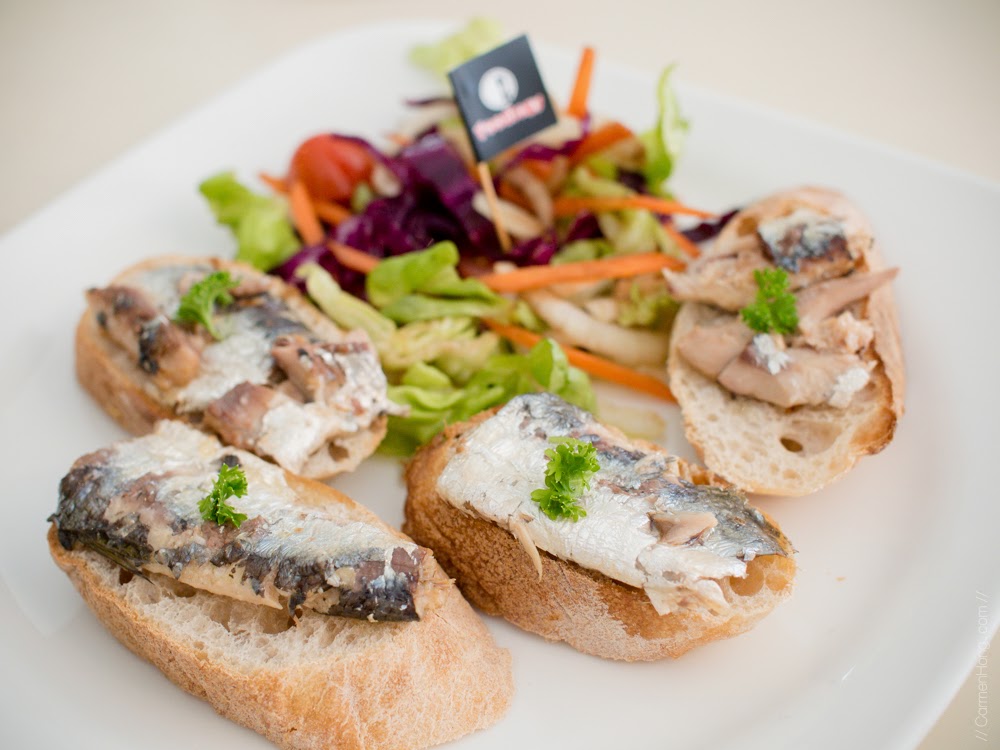 Sardine Sandwiches | RM 21.90
Our meal started off with a rich creamy soup of Mushroom & Truffle Cream Soup, followed by the two salads of Potato Artichoke Salad & Mandarin Orange Salad. What I appealed to me as I was looking through the menu was the use of truffle in a what would have been a normal mushroom soup. If it wasn’t for the use of truffle in the soup, the soup would be just another mushroom soup. This is my first time having the soup of suchcombination and I must say, I did quite enjoy the soup.
The salads arrived looking rather colourful, and simply was not as I expected them to be. There were a lot of different ingredients used for the salads and eating them made it a fun experience as we tried to guess what was inside them salads. All in all, I would say the salads were refreshing to have. 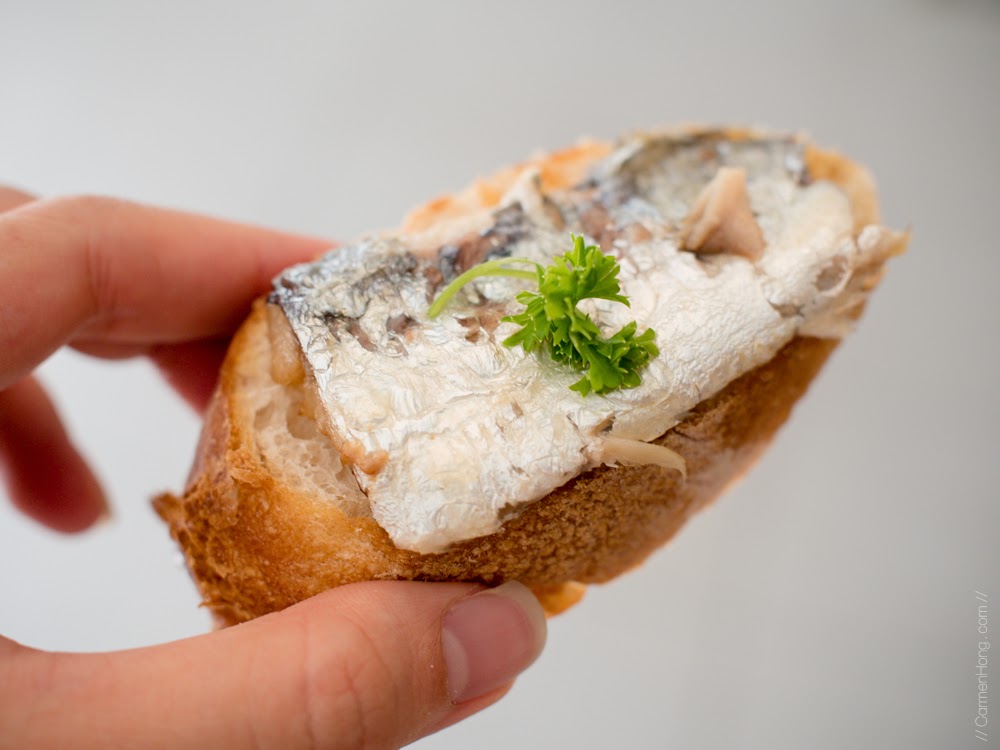 Sardine Sandwiches | RM 21.90
Next up, was a hors d’oeuvre of sardine sandwiches. The sardines are actually from a tin, imported from Spain and simply placed over toasted baguette. As simple as it is, this sandwiches taste better than the ones that would usually need more effort to make. Surprise, surprise. So really sometimes it is the simple things that means the most, eh? 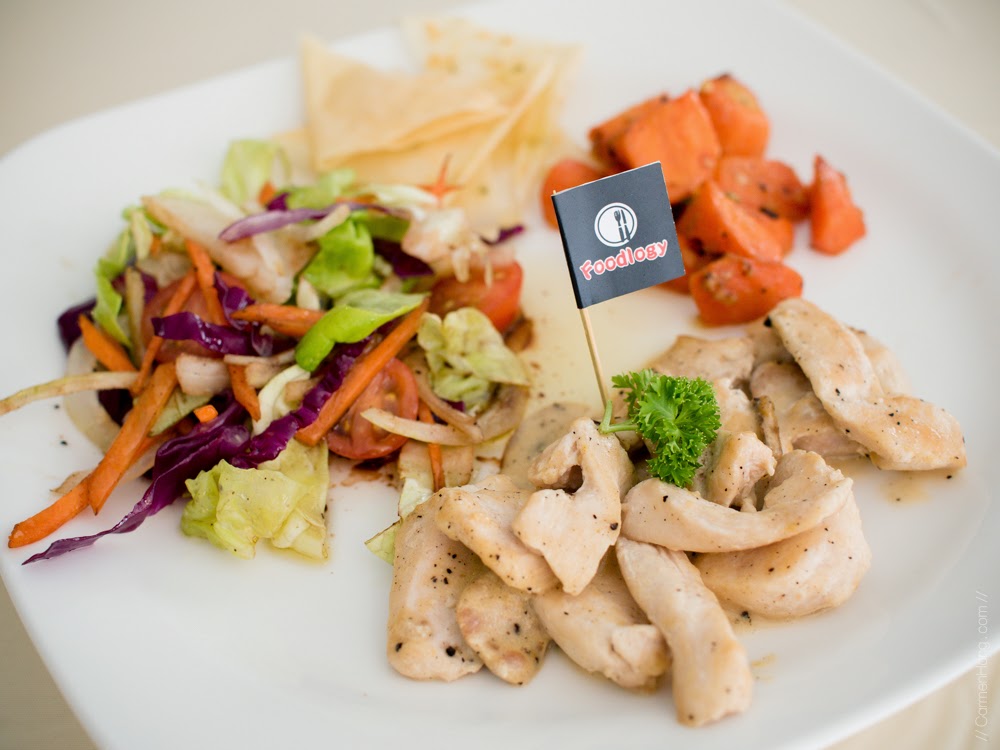 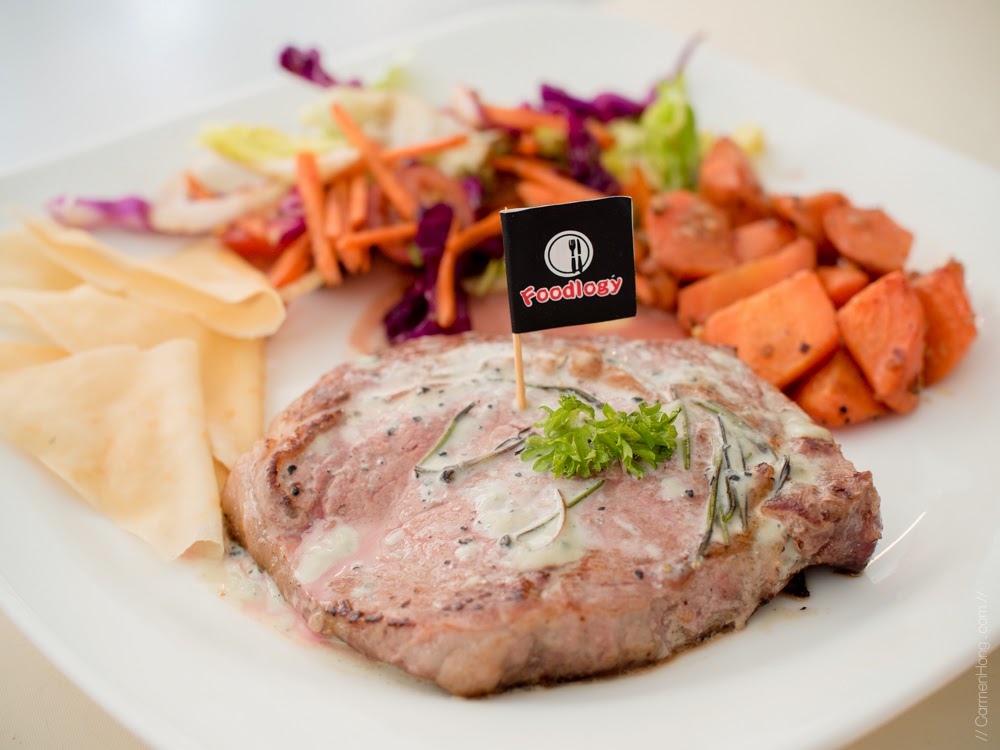 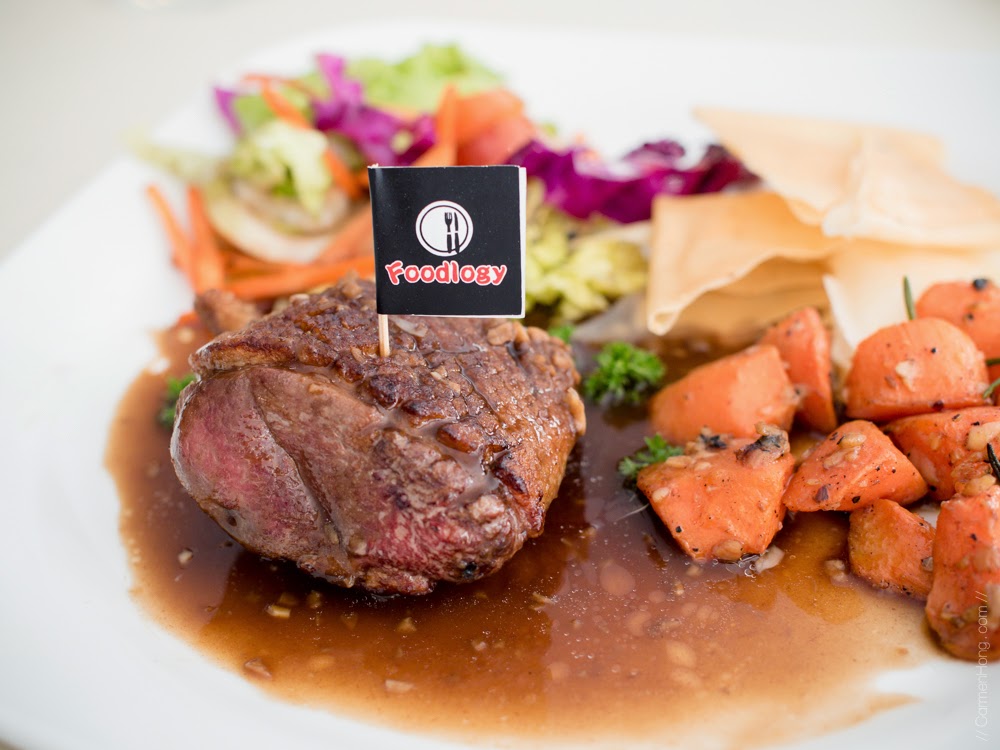 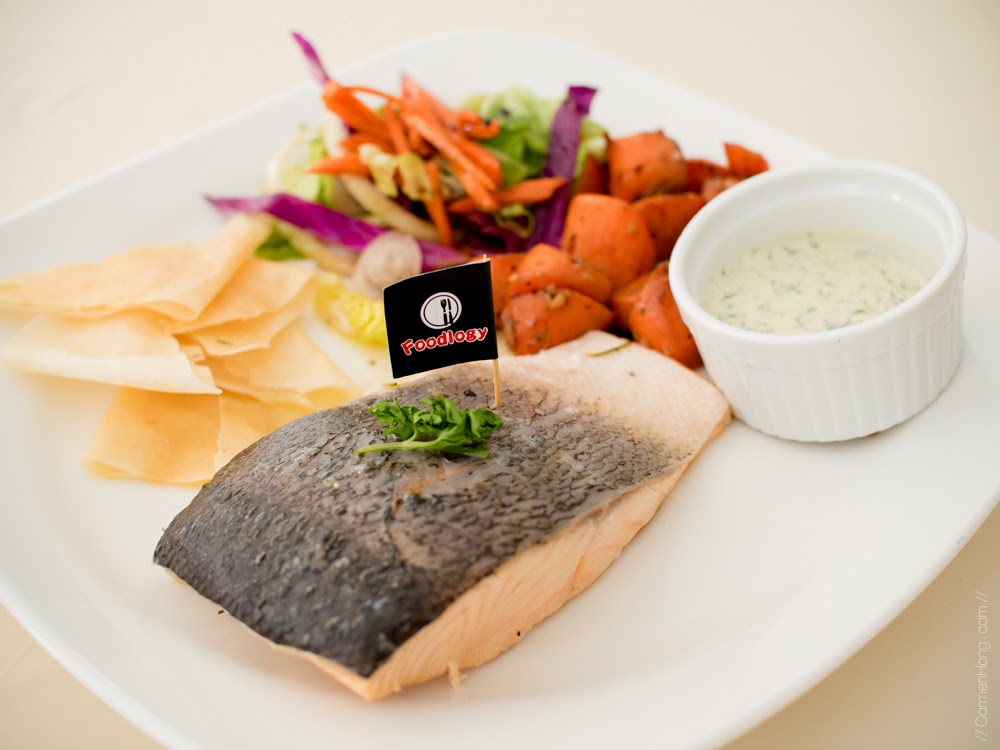 Poached Salmon With Herbs Court Bouillon | RM 39.90
The first main course to arrive was the Chicken A-la Cream which personally appeared to be rather different than what I had expected it to be. Chicken were served sliced, giving impression that the serving size is rather small. They look better suited to be cooked as a side dish though. Taste-wise, it was pretty decent but that didn’t leave much of an impression.
The Steak A-la Bleu, which is a stark contrast to the chicken dish earlier on with its thick slab of meat cooked with a super rich blue cheese. Super cheesy, you don’t even need to taste it to know it’s that rich. It’s a 200g rib eye steak, cooked rare. The cheese overpowers that almost raw meat taste and frankly, I love it like that. But then again, I’m bias probably because of my love for cheese.
Duck Breast with Smoked Tea & Soya Sauce, was an unlikely choice for me because chances are I wouldn’t have picked that. But boy, was I pleasantly surprised with this dish. I hadn’t had much expectation of it mainly because I probably didn’t know what to expect. The duck meat, was well marinated with ‘Lapsang Souchong’ Smoked Tea. Although it is a seemingly odd choice of cooking method, but I can reassure you that this is something you have to try from the restaurant.
Then, there is Poached Salmon With Herbs Court Bouillon, where you have 180 grams of just poached salmon. This was another simple dish, but the best part was in the dill sauce which was accompanied along it. Personally though, I was just smitten with how fresh the salmon is and natural it tasted. That was the best part of the dish for me. 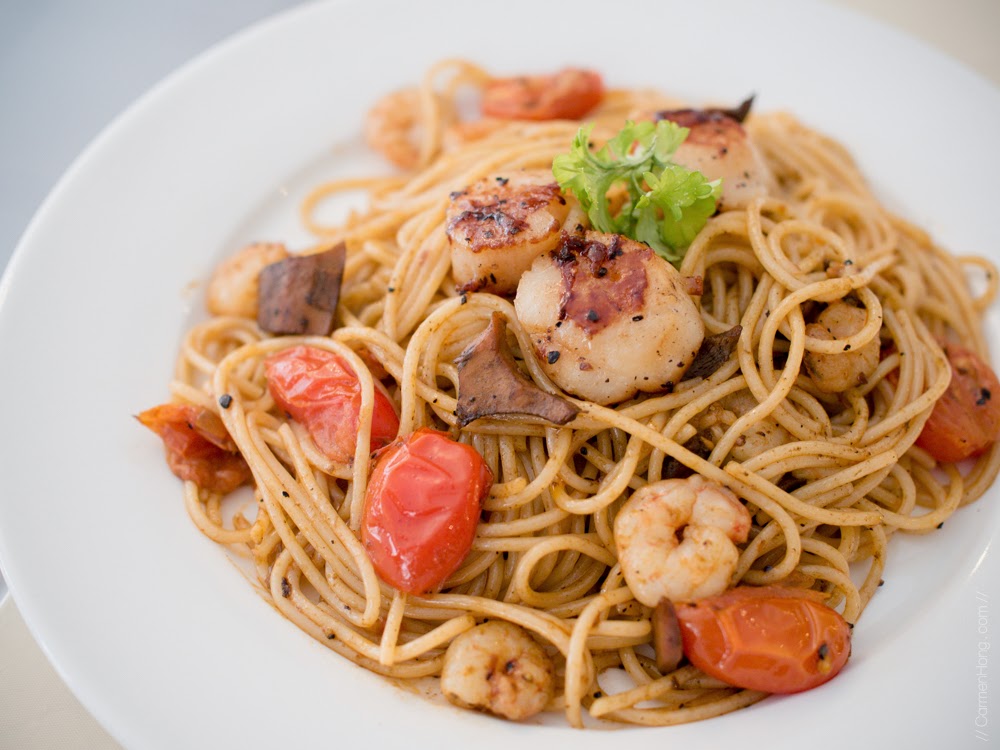 Seafood Pasta in White Wine Reduction Sauce | RM 45.90
My expectation of the Seafood Pasta in White Wine Reduction Sauce had a lot to do with the price of the dish, I mean it is only fair to have a rather high expectation of the pasta based on the price of the dish. There are shrimps, scallops, fish meat and also squid in ink sauce. The squid in ink sauce, along with the wine used in the dish is the reason why the price is above average. 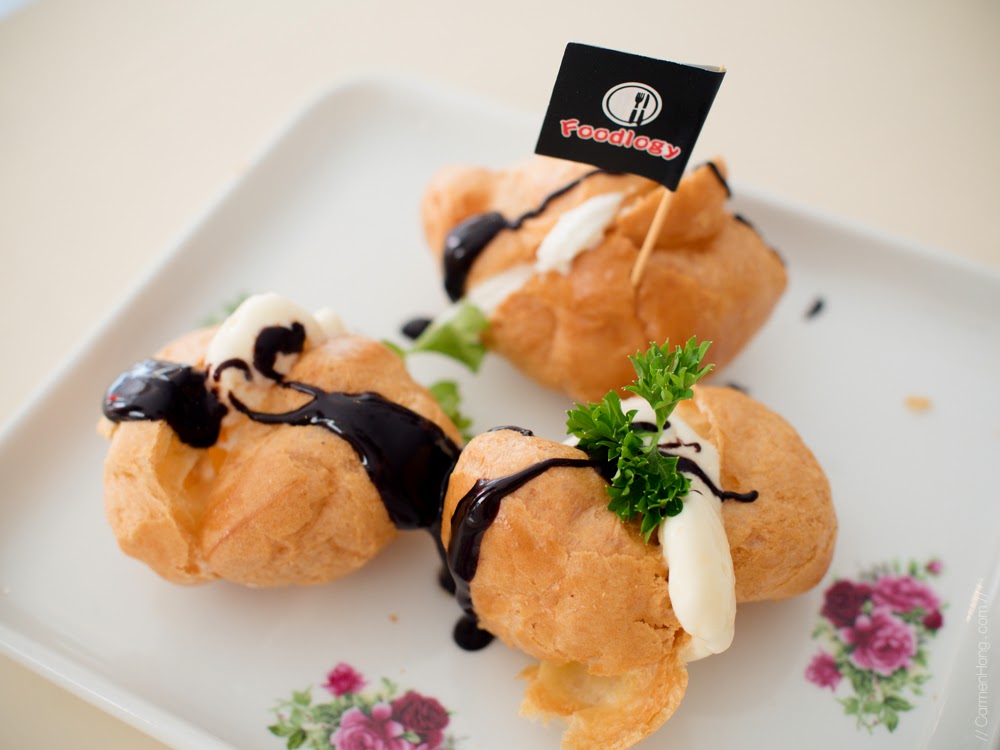 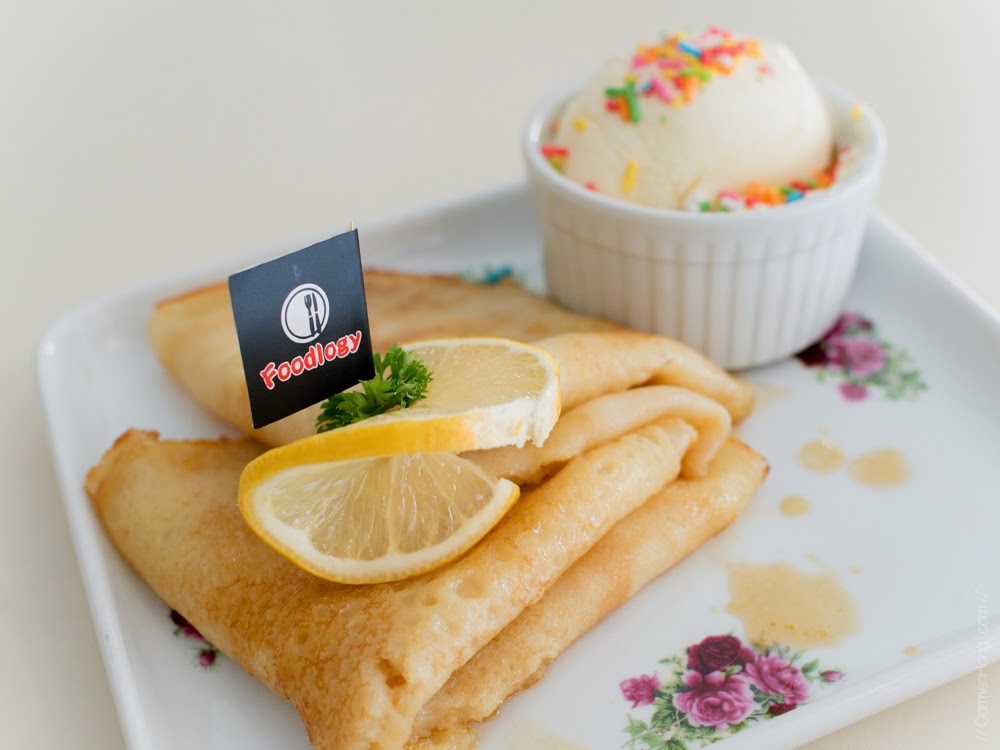 Crepes Suzettes | RM 15.90
* * * * * * * * * *
After the dining sessin in Foodlogy, I came to the conclusion that the term casual French dining is due to the dishes being loosely based on the French cuisine but up to the chef’s interpretation on what these dishes should be made. And this was exactly what the chefs told me afterwards as well. Here’s a fun fact about the restaurant; it is started by two sisters who had a passion in cooking. After learning from a French chef, they were inspired to start the restaurant.
And that’s all I have for this post, but wait, I’ll let you in on a little secret since you read this post till the end. One of the surprisingly delicious dish here is not actually a French dish but a local Malaysian favourite which is made from the family’s recipe. 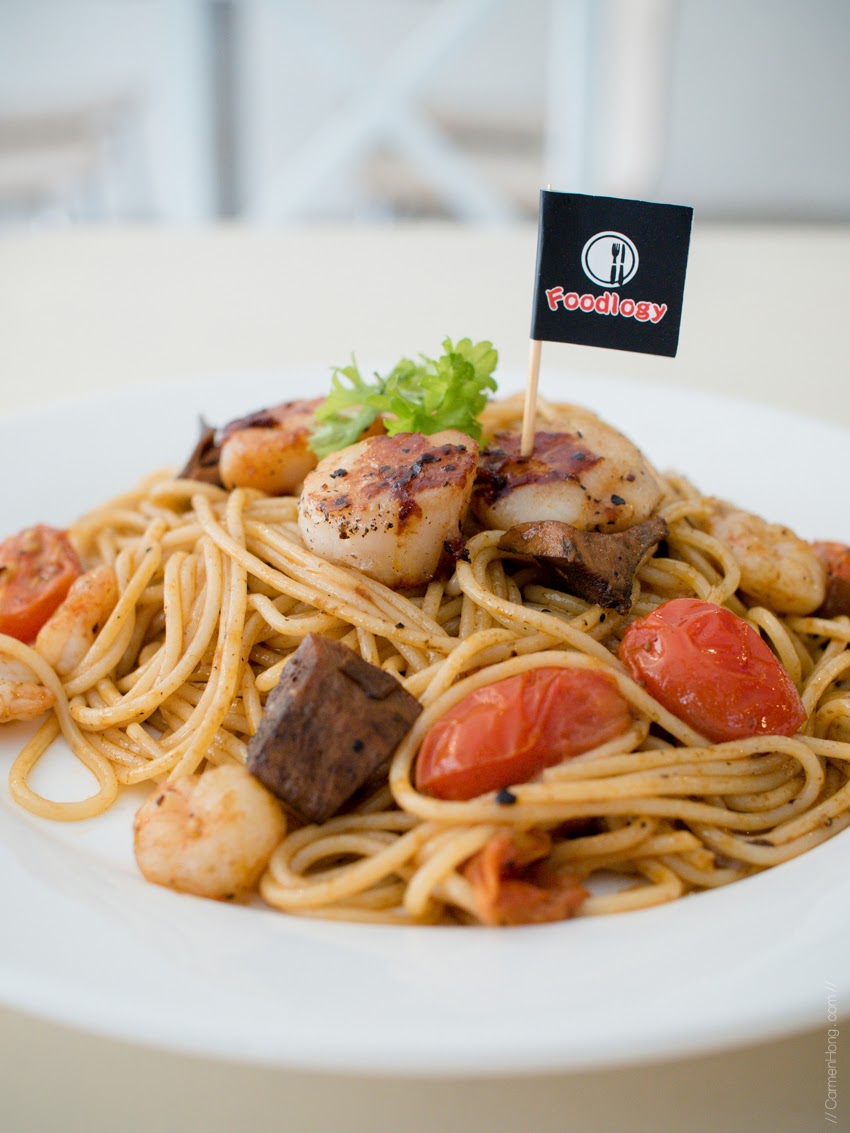 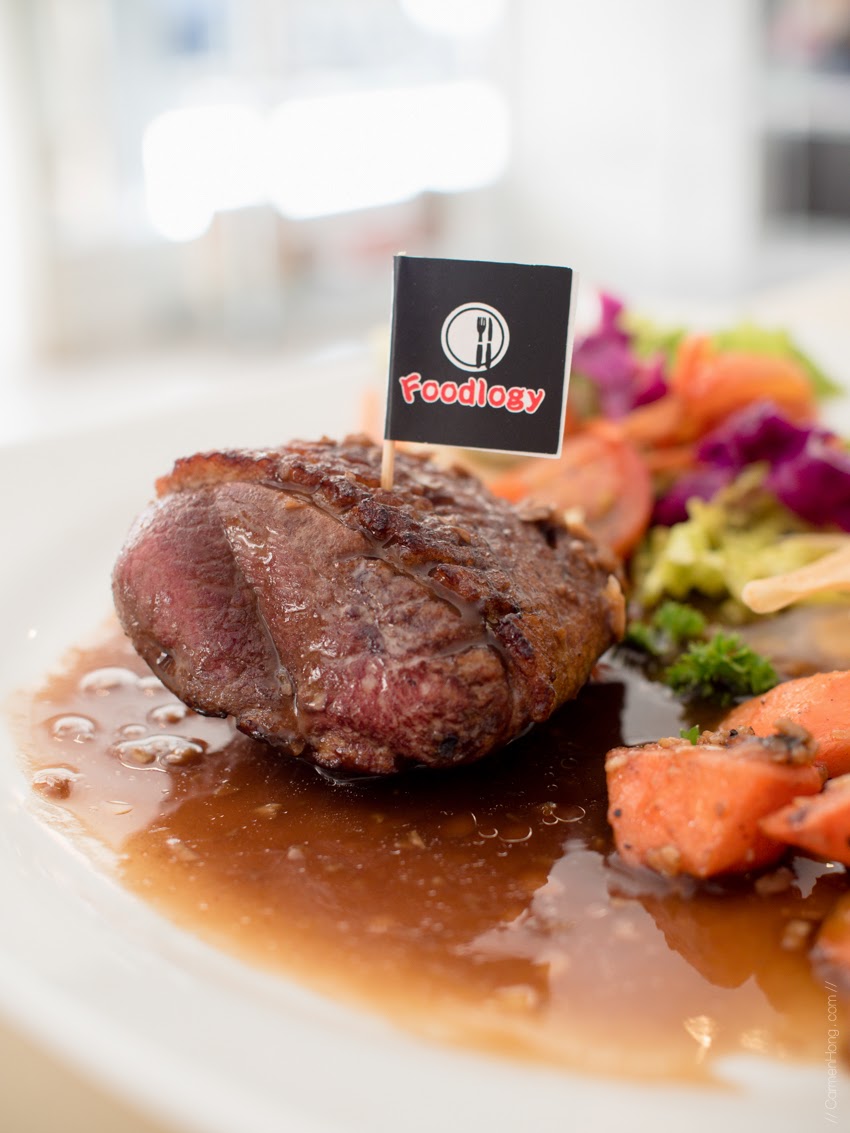 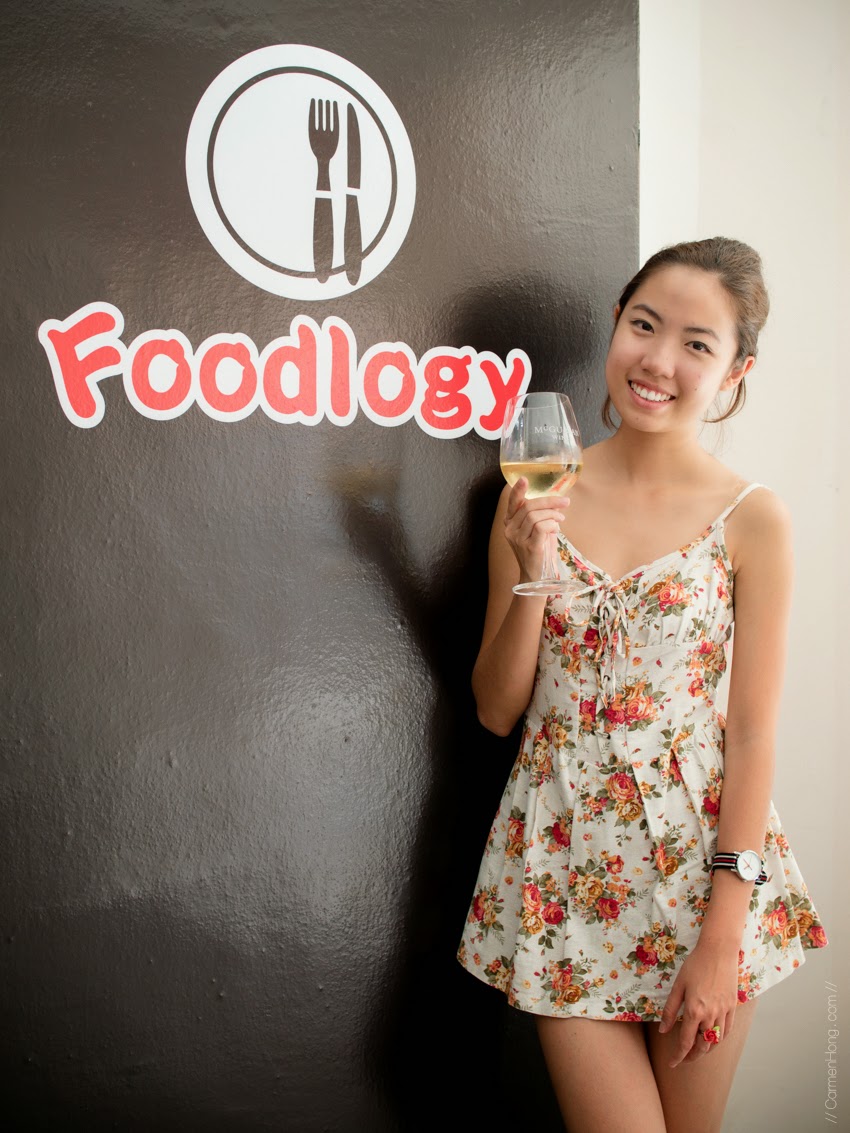 CNY: The Year of…