I have always loved ramen, but the thing was I never made it a point to hunt for the best ramen in town. In fact, in my lifetime I have only ate ramen four times, excluding the ones I had from Goku Raku Ramen. The first time I had it was in Pavilion, second and third was at the famed Menya Musashi in One Utama. Apparently, the ones in Menya are great according to many, and I, myself personally found them rather tasty and delicious. So, I would use them as a benchmark for the ramen I had this round in Goku Raku Ramen, located on the North Court of Mid Valley Megamall. 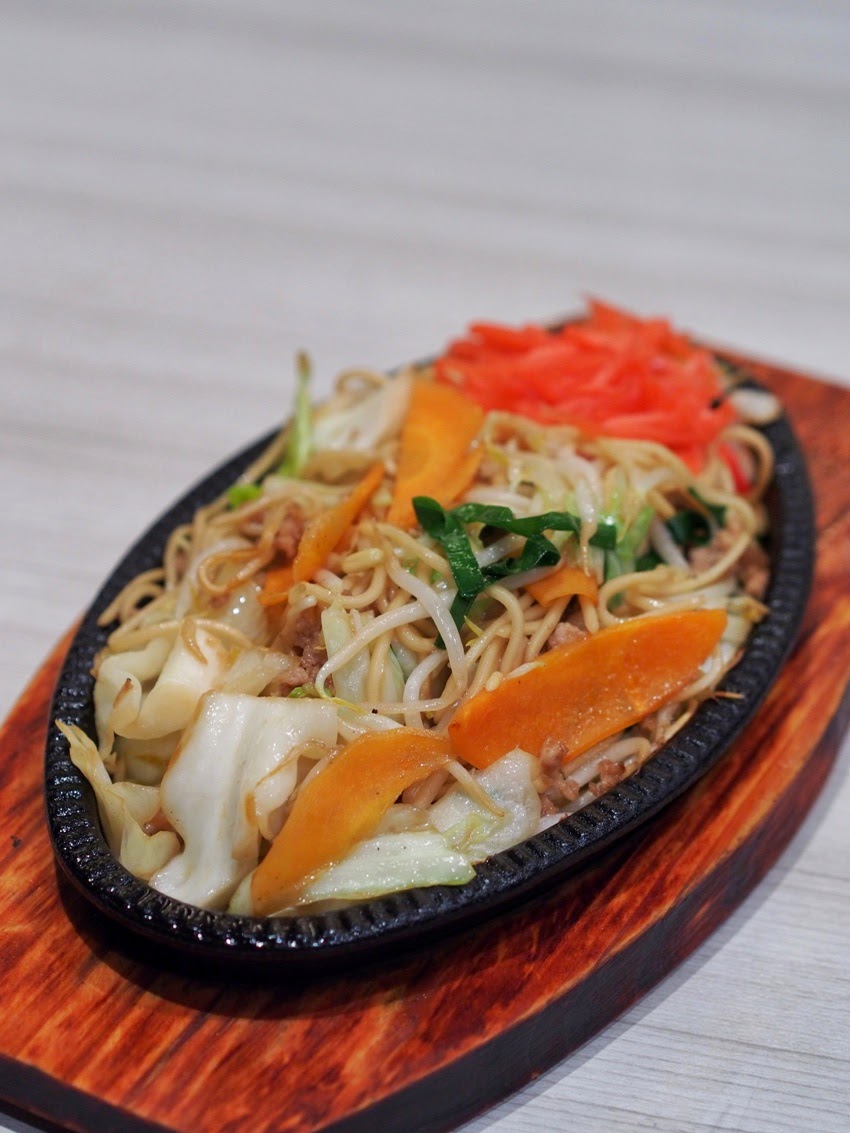 Shanghai Fried Ramen | RM13.90
We kicked things off with the Shanghai Fried Ramen which was what I imagine to be a Japanese glorified version of our Malaysian’s ‘mee mamak’. It was served on a hot plate which helped to keep the noodles warm and tasty for a while longer. As you can see, ramen was stirred fried with vegetables and minced meat. In terms of flavour, it was never short of that, although you’ll need to toss it again to get the sauce evenly across the noodles. I am a proud carnivore, which is why I felt the minced meat in the Shanghai Fried Ramen was ridiculously portioned. I couldn’t even taste much of the meat. Also, point to note is that the noodles are served with pickled ginger (the pinkish stuff pictured above) which is best to be eaten together with the noodles to give it that “zangy” kick. 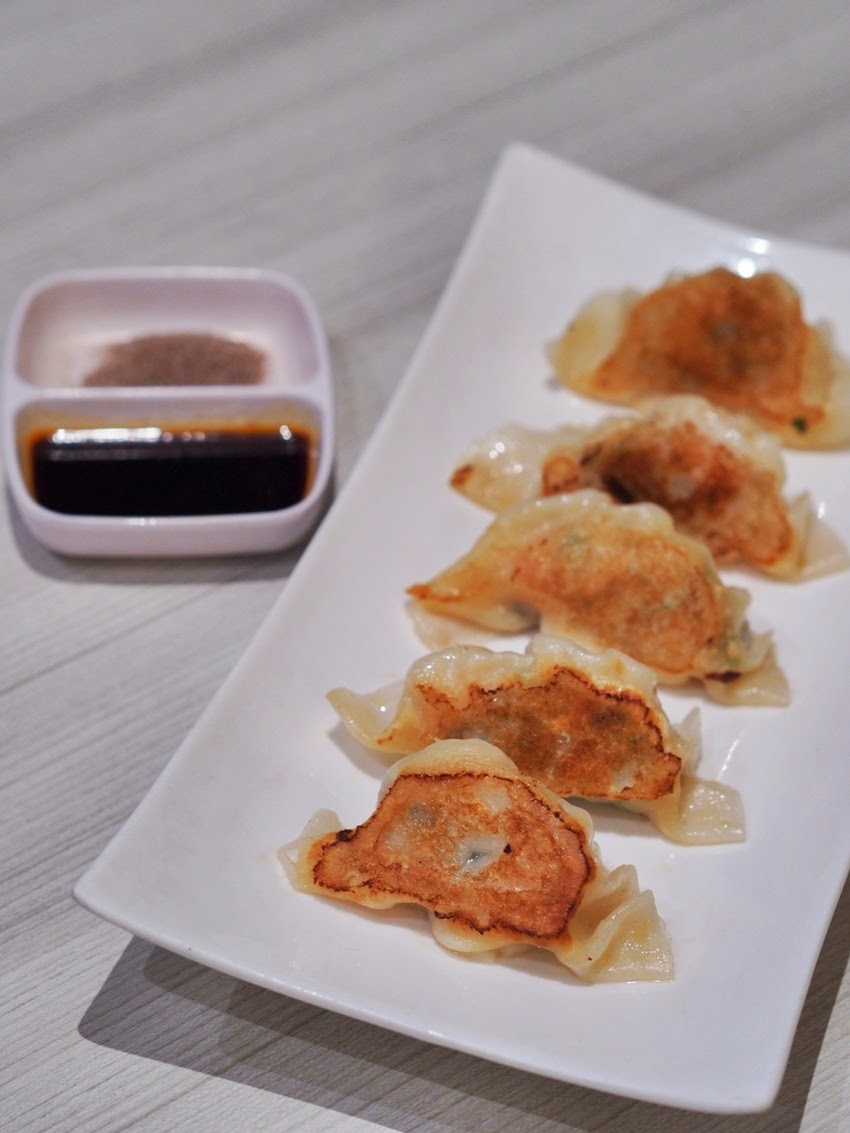 Ebi Gyoza | RM10.90
“Ebi” as the name suggests is prawns/shrimps in Japanese. Now, I’m all too familiar with meat dumplings and I am a huge fan of them. Prawns dumplings here reminds me of the Chinese’s har kau. I do realise that I keep making reference to other cuisines, only because that is what I sub-consciously associate them with. I welcomed the prawn dumplings with open heart and mouth too, only to be mildly disappointed with the taste. There was less than a handful of prawn fillings and the skin was thicker than what I would have loved. This was served ala Shangai style together with ginger, soy sauce and another salt-like dipping powder. (The chef mentioned what it was, but I can’t recall it now) 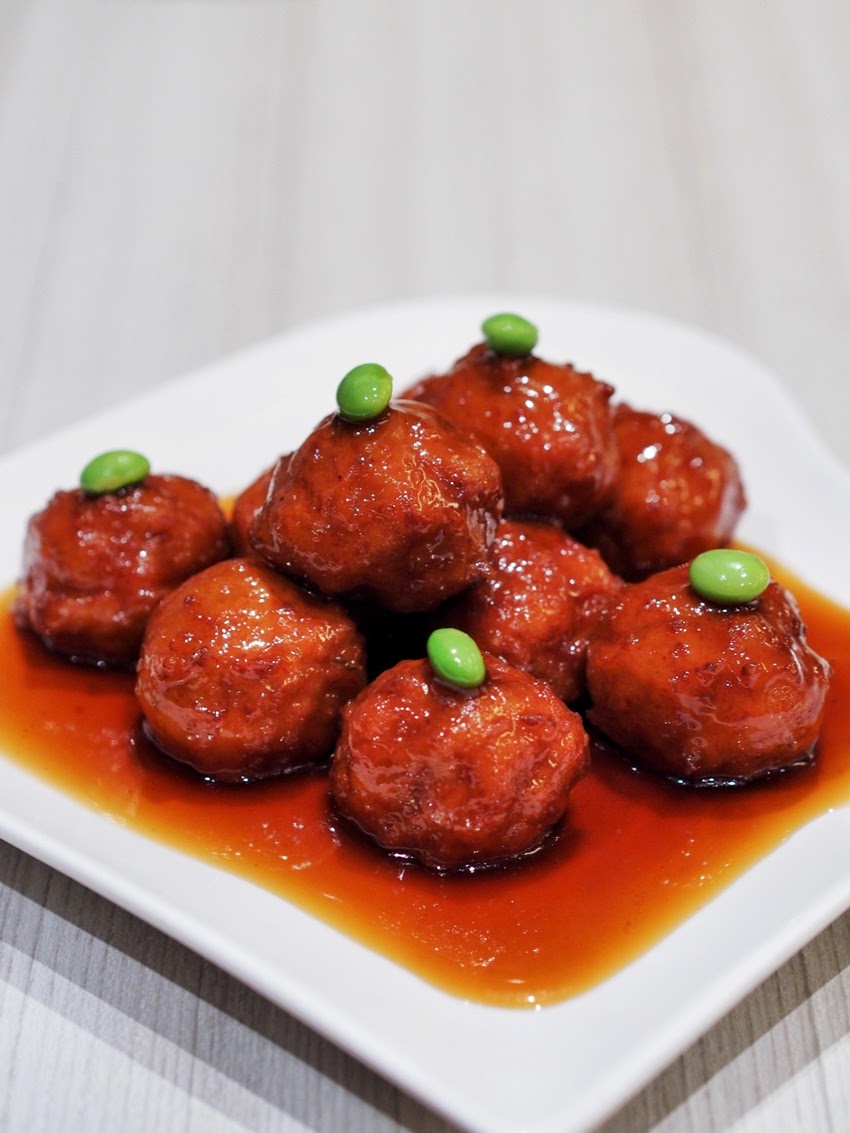 GRR Meatballs | RM5 5pcs, RM9 10pcs, RM17 20pcs
When the meatballs were served, I never thought I would seen them presented so rather gloriously. It is as though the meatballs have a spotlight on them and it just begs to be eaten. I mean, just look at that! So back to the taste of the meatballs, I had one bite into and ohmmm, I love the sauce used in the meatballs. It was a tangy sweet sour sauce, and meatballs were crusty on the outside, but soft on the inside. But but, I didn’t like the texture of the meatballs. It was far too soft for my liking. When asked, the chef mentioned that it was the intention to make them softer rather than meaty. So, each to its own. 😉 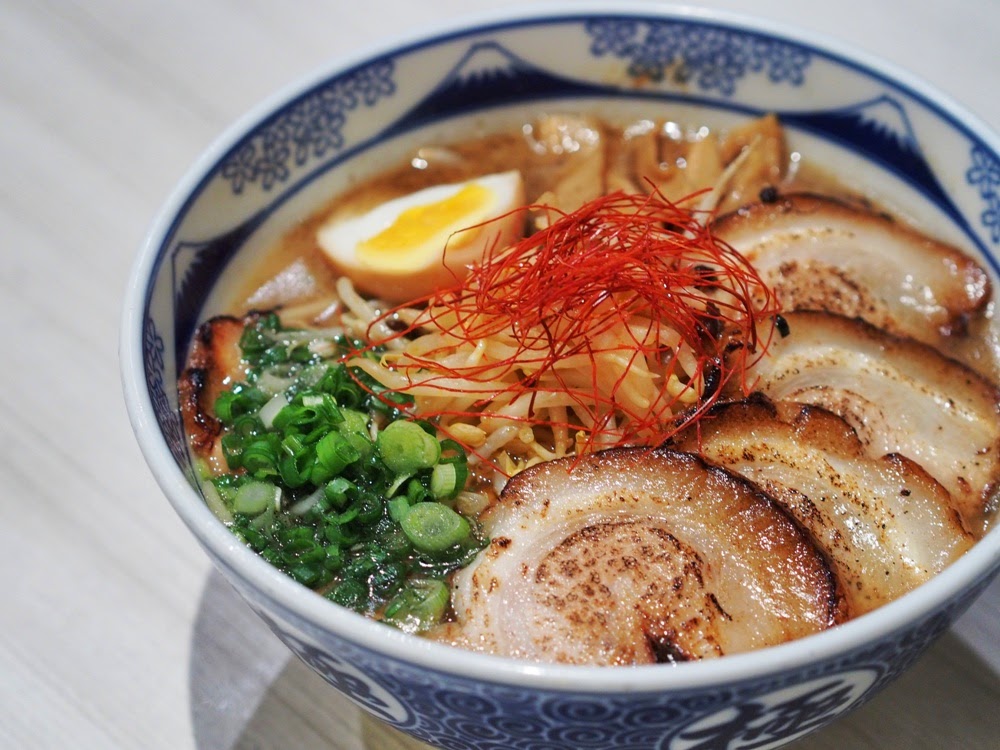 5 Star Aburi Char Siew Ramen | RM25.90 Regular
In all honestly, I never realised those pork slices in the ramen were actually called ‘char siew’ and I never actually fallen in love with those pork slices in my ramen until I had the ones from Goku Raku Ramen. I remember these pork slices in the first few ones I had, they were tasty but they never quite leave such an impression on me. The first bite of the Aburi Char Siew I had was pure love, in the few seconds after that, I decided it was the best I have ever had, compared all the types of ‘char siew’ I have ever had in my life. IT IS THAT AMAZING. 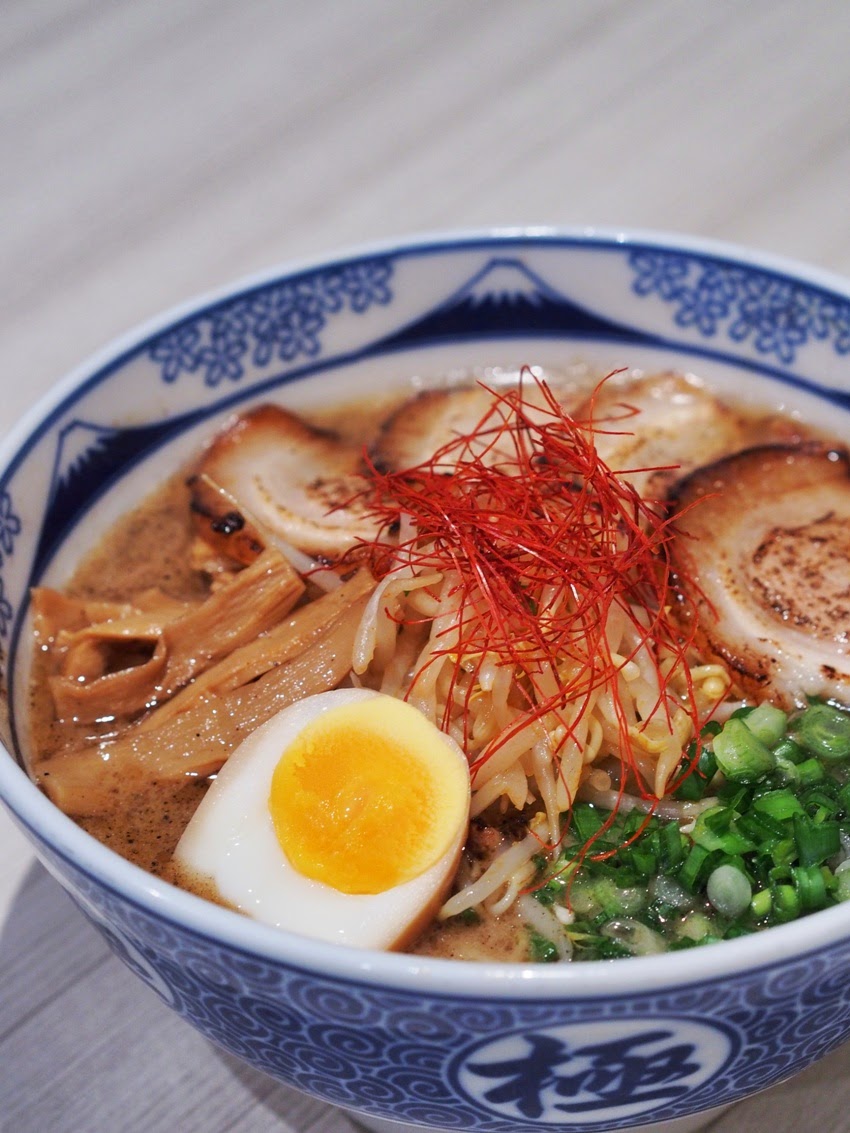 5 Star Aburi Char Siew Ramen | RM25.90 Regular
This ramen was given the 5 Star name because it was tad heavier in terms of taste as compared to the usual ‘tonkatsu’ broth used. Albeit it was heavier in taste, and was recommended for those who are more adventurous, I found myself liking the broth a lot and I loved how it complemented the ramen and the loads of bean sprouts and bamboo shoots. One thing to note was that their egg, wasn’t done as perfectly soft-core. That aside, this was one of the best ramen I ever tasted in a while.
Last but not least, we ended things with a bang, by attempting to finish a Chef’s Specialty Course Meal; Set C. In the set, there are 13 items all together and they are as follows;
1.   Edamame
2.   Aburi Char Siew
3.   Chef Recommended Salad
4.   Pork Loin Rei Shabu
5.   Tori Momo Karaage
6.   Crispy Shrimp Mayo
7.   Siew Mai
8.   Ebi Chili
9.   Sweet & Sour Pork
10. Utsonomiya Sui Gyoza
11. Garlic Fried Rice/Mini Ramen
12. Annin Tofu Dessert
13. Sesame Balls I didn’t managed to get a picture of all the dishes served, because I was using a prime lens of fixed focal length. I had my kit lens with me but even with the wide angle, I couldn’t shoot a pretty picture of all the food, so I thought I’d use the picture provided just for illustration purposes. I did shoot the food individually, not all of it. So, you can actually compare both the pictures, between the actual and the studio shot one. :p 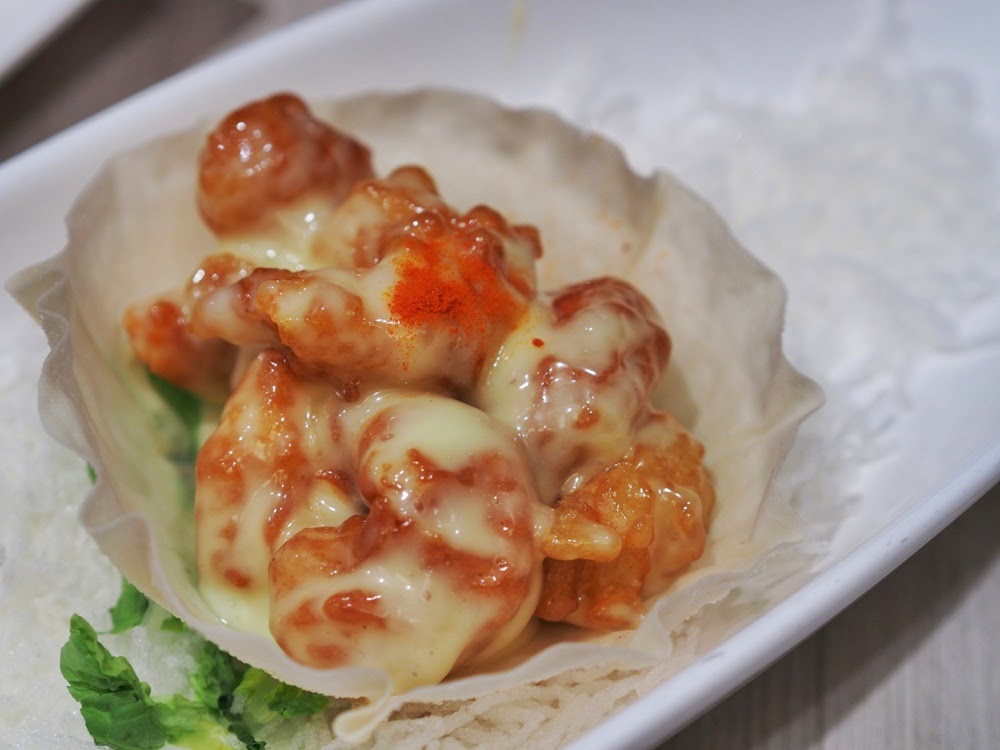 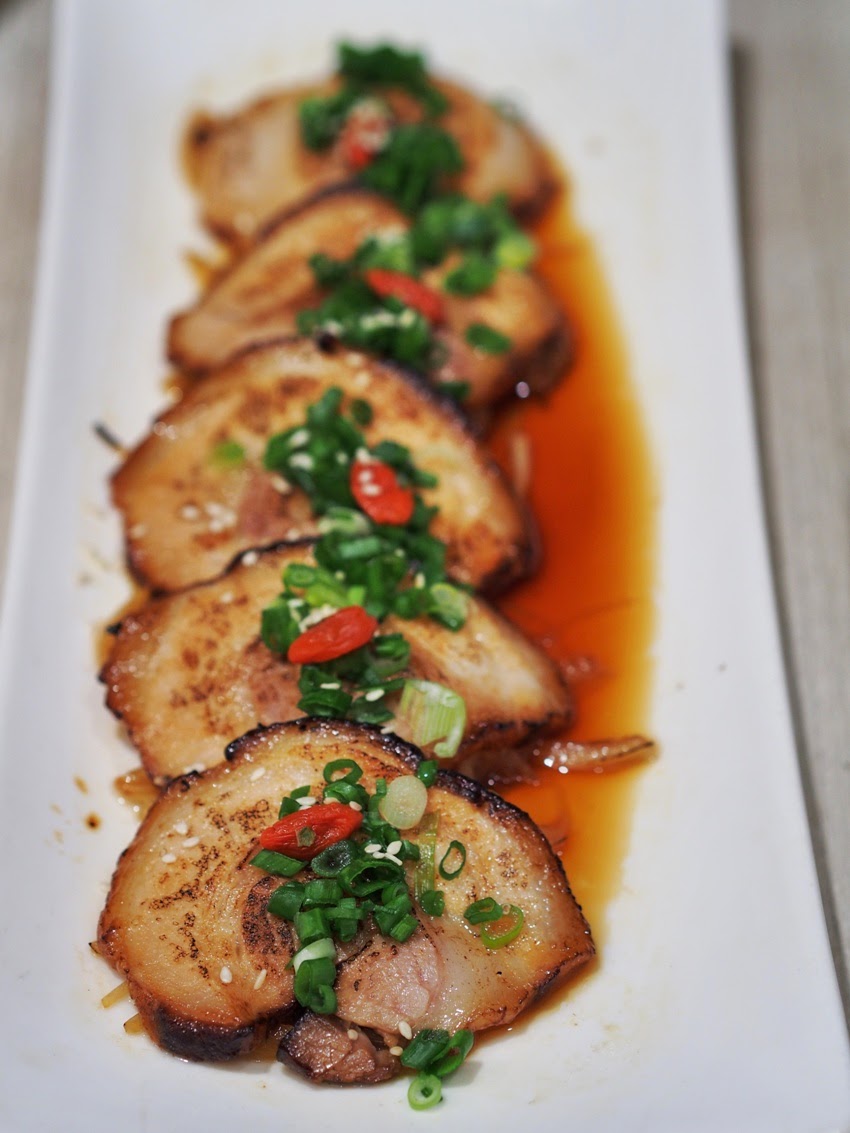 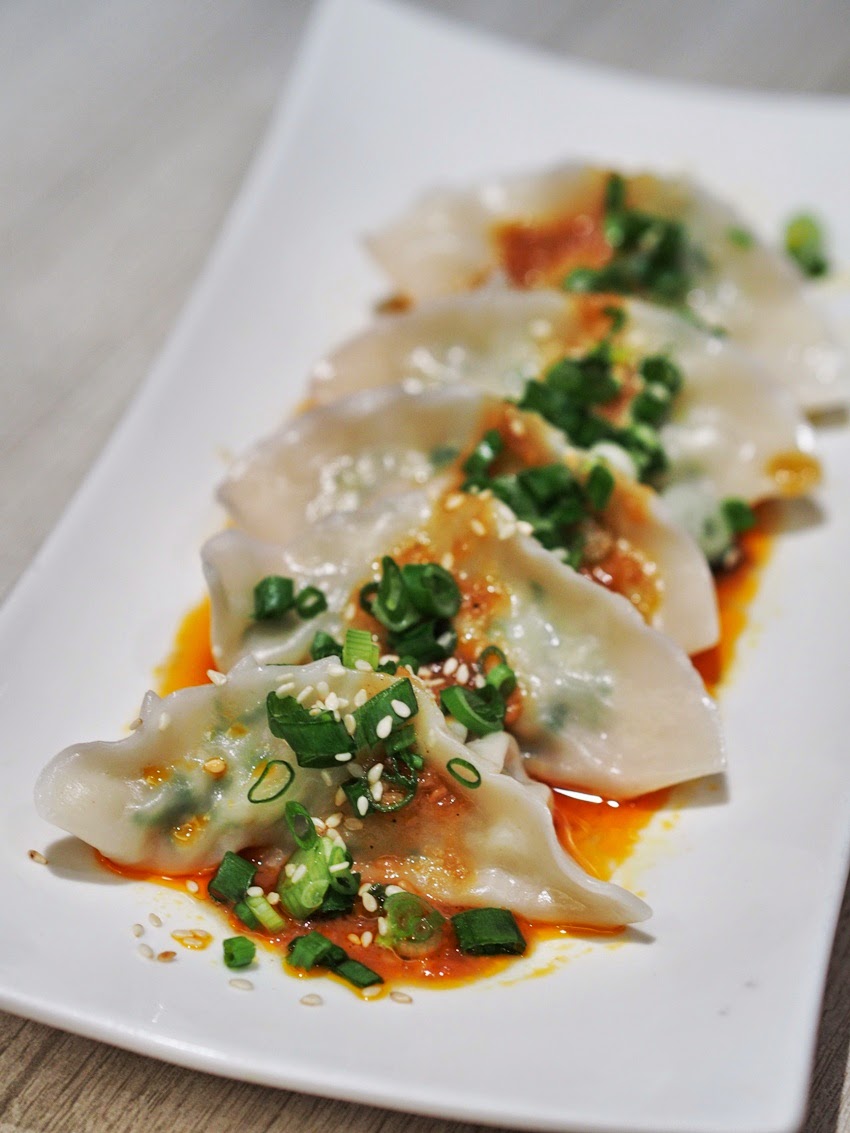 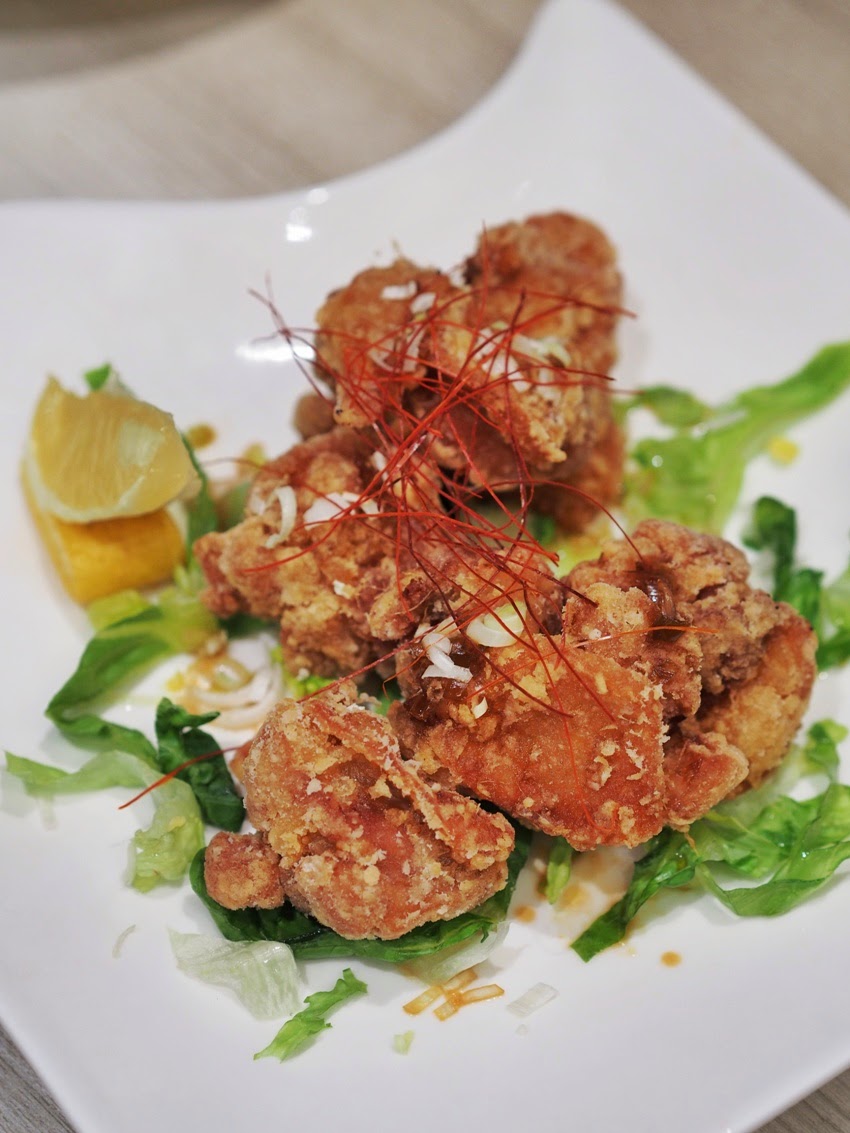 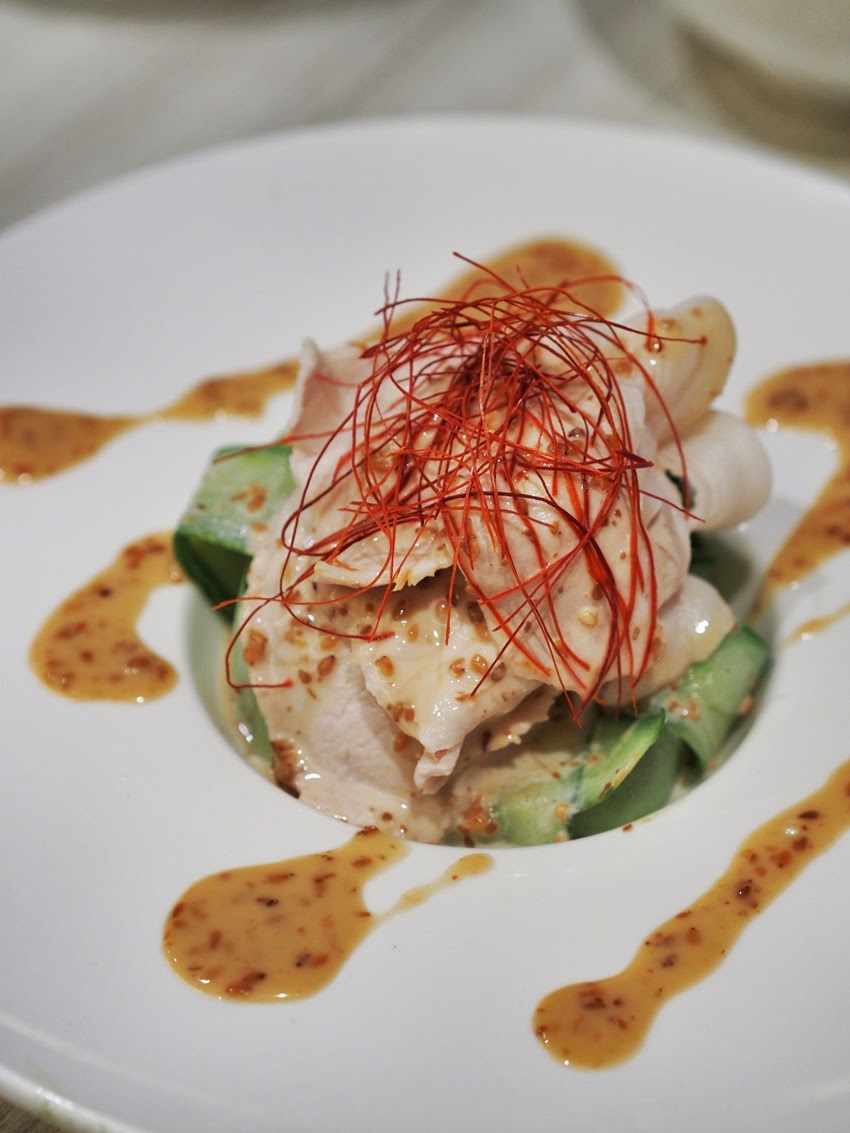 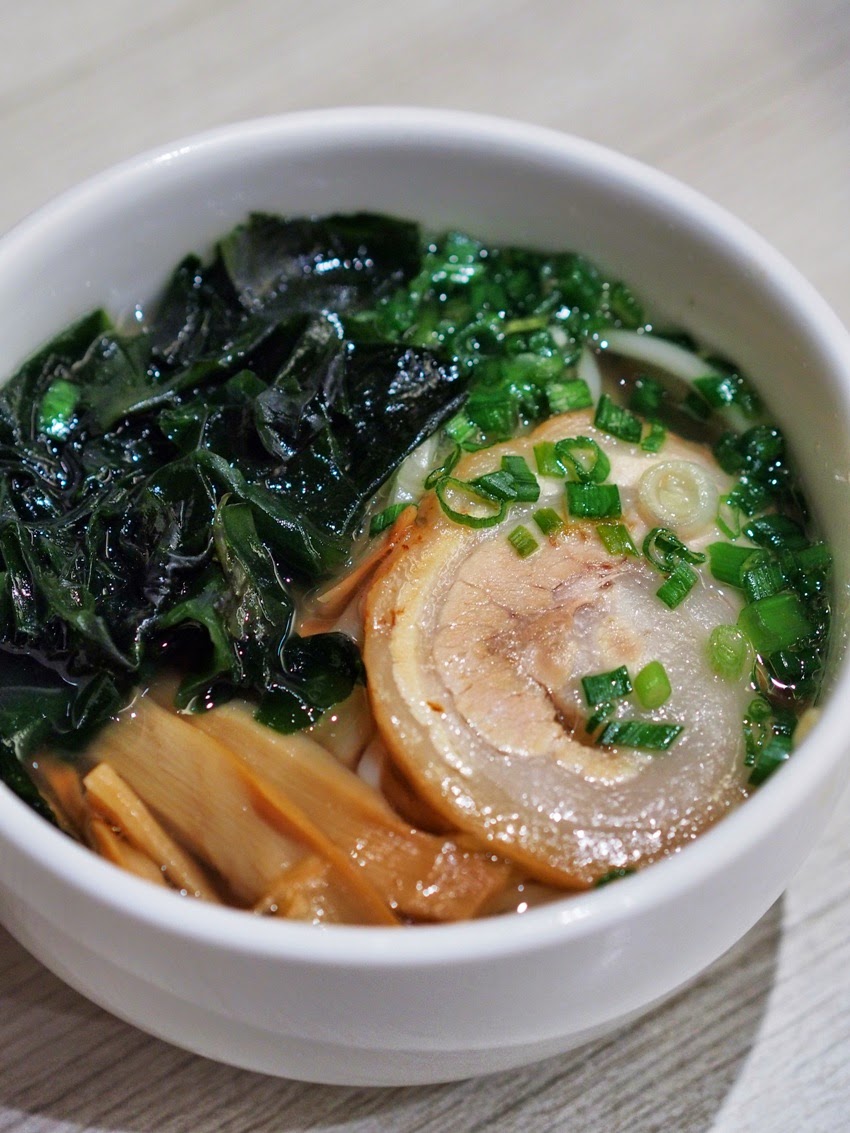 Mini Ramen (Tokyo soup flavour)  | Three servings
For the Chef’s Specialty Course Meal : Set C, it is one serving for most of the dishes in the set course meal above except for Mini Ramen, Annin Tofu Dessert and Sesame Ball, whereby the servings are for three persons. The course meal is recommended for three to four persons, but I reckon you can feed five persons too if you and your eating partners have smaller appetite.
All in all, I found my experience dining in Goku Raku Ramen a pleasant one, coupled with a few nice surprises. I certainly hadn’t expected the ramen here to be so delicious. Especially since I never heard of Goku Raku Ramen before this, and in all honesty, people need to give this place a try! Best of all is that the head chef hails from the famous ramen town in Japan, so the recipe is an authentic Japanese recipe.
If you’re planning to give this place a try, I have got a special discount vouchers for my readers only! 🙂 🙂 I have a 50% discount voucher for GRR Meatballs! All you need to do is print the vouchers and present it before making payment! 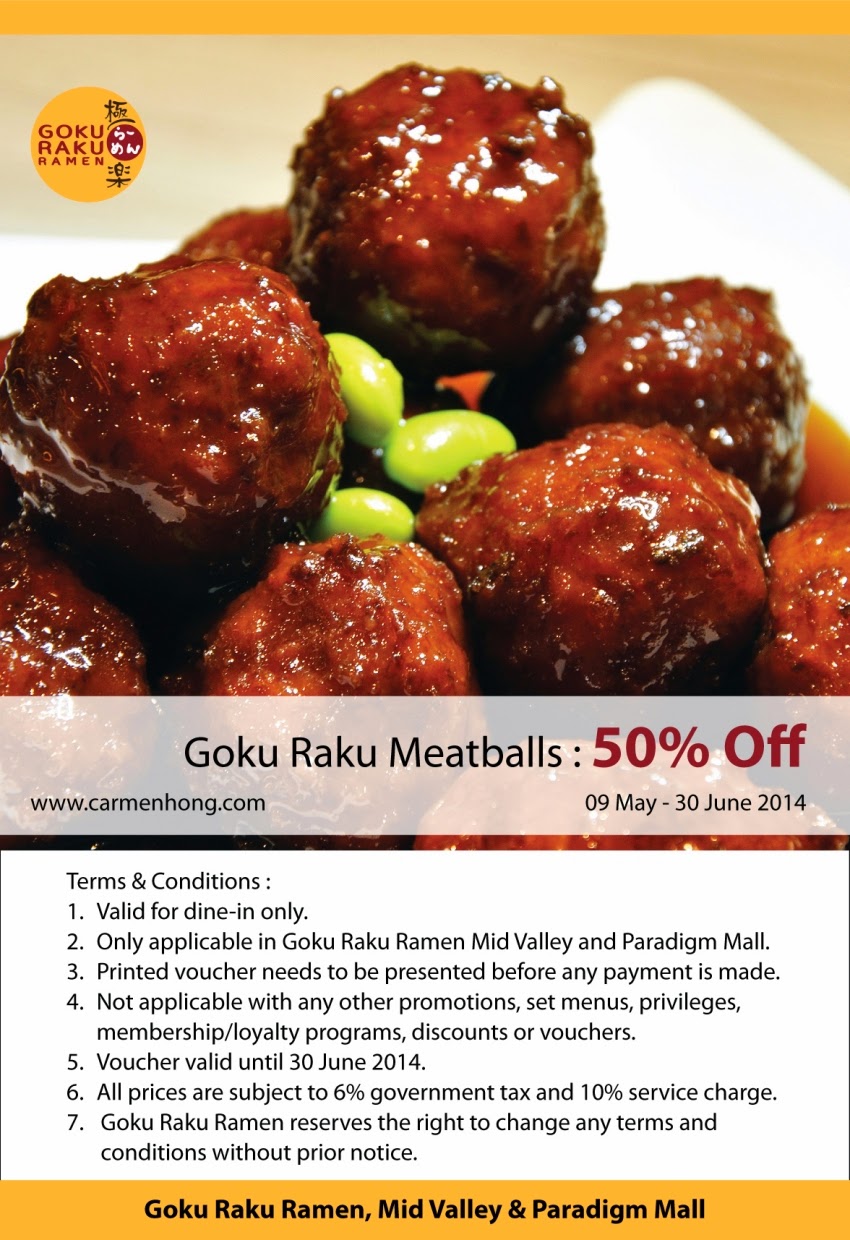