Sri Petaling is as good as a second home for me, but frankly it’s far from being a food haven despite the numerous food restaurants that mushroomed in the newer shop lots area. I mean I have a couple of favourites places to head to around that area, but more often not, I find myself clueless of what to eat around Sri Petaling. This other day I was invited to a food review at Krathong Thai Restaurant which is located in Sri Petaling at a place called Glass City. I had no idea where that was until I arrived at the restaurant. As glamorous as Glass City sounds like, it’s basically a place where row of shops were built from just glass. No bricks or cemented wall. That’s all.
So, how was the food at Krathong Thai Restaurant? Read on to find out.
* * * * * * * * * * 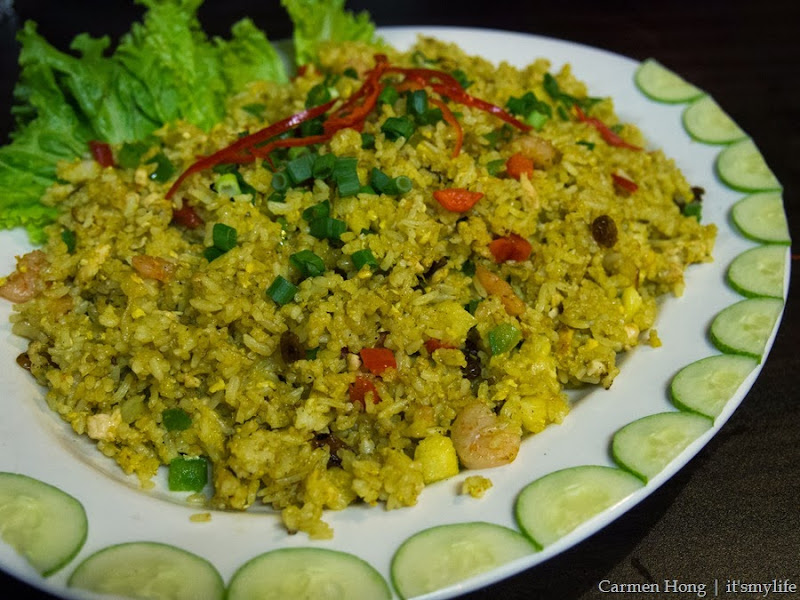 Pineapple Fried Rice, “Khow Ob Sapparod” | RM9 per serving
If I hadn’t had a look at the menu, I wouldn’t have known that this was actually fried rice with pineapple. As the name suggests, I would assume it was to have pineapple in the rice. If you have the same expectation as I did, please be disappointed because I could hardly tell that it was fried pineapple rice. There were probably traces of pineapple but I don’t think I ate any. Pineapple aside, the rice was a tad soggy, but not oily at all. I would say it tasted okay, and very mediocre. 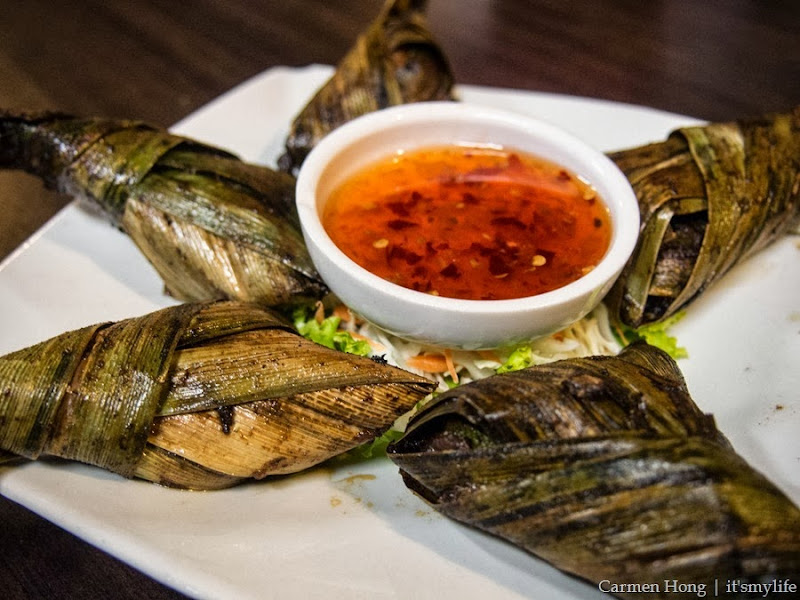 Pandan Chicken | Didn’t take down the price of this. Opps.
This dish arrived after the fried rice, with a more promising presentation than the former. I have always personally loved Pandan fried chicken, especially when my mom makes them at home. But she rarely does because of how tedious it was to make them, she’ll end up asking me to wrap them for her. The meat used was breast chicken meat and in terms of the taste, again, it wasn’t remarkable. It had hints of pandan but somehow if you’re expecting a kick or a burst of flavour, this will disappoint. 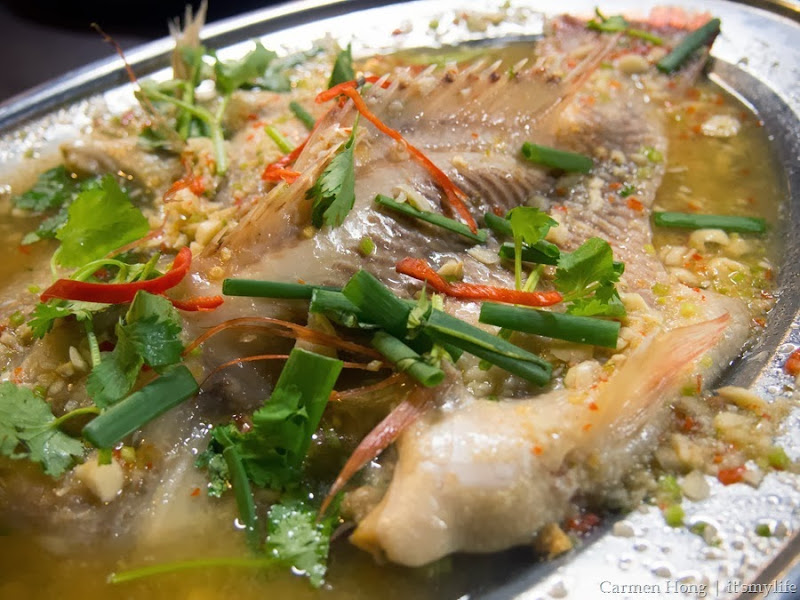 Steamed Talapia Fish (Krathong) Style, “Plar Krathong” | Prices are seasonal.
This was possible one of the messiest presentation of steamed fish that I have ever came across, which often brings me to say that I would always prefer to shoot photogenic food that are worthy of the #foodporn hashtags. (Btw, on Instagram I would usually post up yummy food pictures there before it goes on the blog, so be sure to follow me at @itscarmenhong.)
As cliche as the term, don’t judge a book by its cover, the steamed fish was actually a nice surprise because one, it was super duper fresh. Chances are the fish was still swimming in the pond, an hour before it was served. Vegetarians and animal activists can gasp now. *gasp* Other than that, it had a zesty unique spicy flavour which complemented the fish. The fish didn’t have the earthy type of smell to it, mainly because of the way it is cooked and bred. 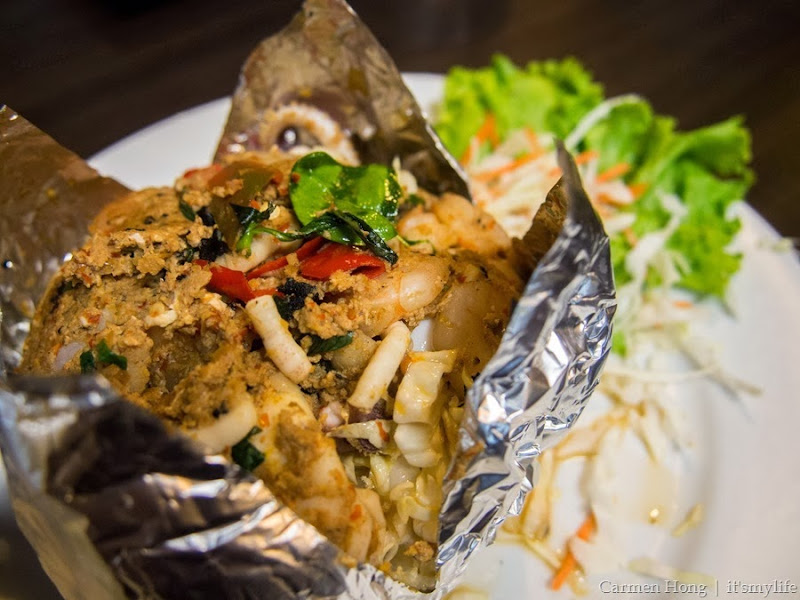 Seafood ‘otak-otak’ | This is not from the menu, so might have to request from the waitress.

I have always loved otak-otak, these are often always offered in places like PappaRich and Old Town which I would sometimes order even though it wasn’t particularly great. I really loved eating otak-otak and the best one I have tasted is from Johor, but I may not need to travel all the way down just for otak-otak. I was taken by surprise by this dish, mostly because it was a combination of some of favourite food – the otak-otak and seafood, glorious seafood. They had huge juicy prawns and white squid together with otak-otak. Yummy goodness in a foil! Unfortunately, as huge as the serving looks like in the picture, it is actually much lesser in fact. The inside of the boil is raised, much like an upside down bowl. I almost felt cheated by that. 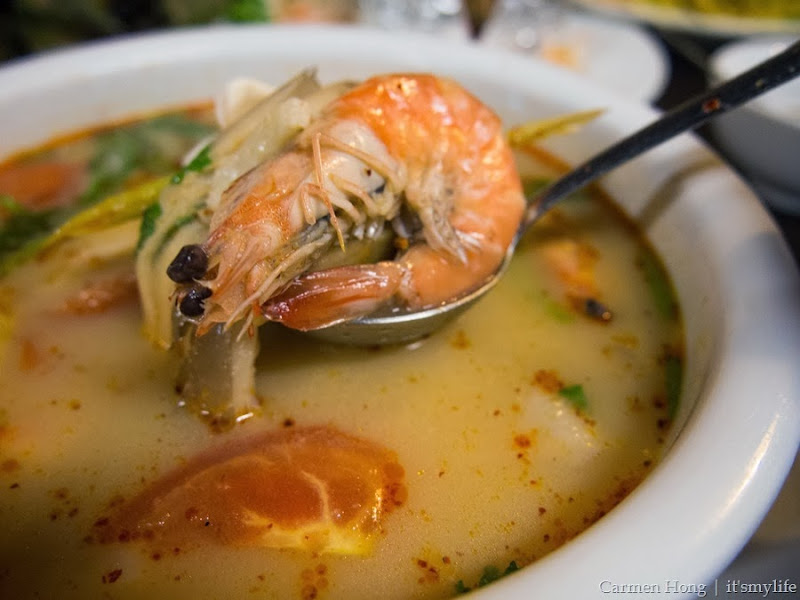 Nothing fancy, nothing to shout about. It has the tom yum taste but again without the kick. The tom yum is more to the milky but not too heavy on the taste. It wasn’t too spicy so it was still okay. There was quite a variety of seafood in the soup, which I would say compensated for the lack of oomph I was expecting for. 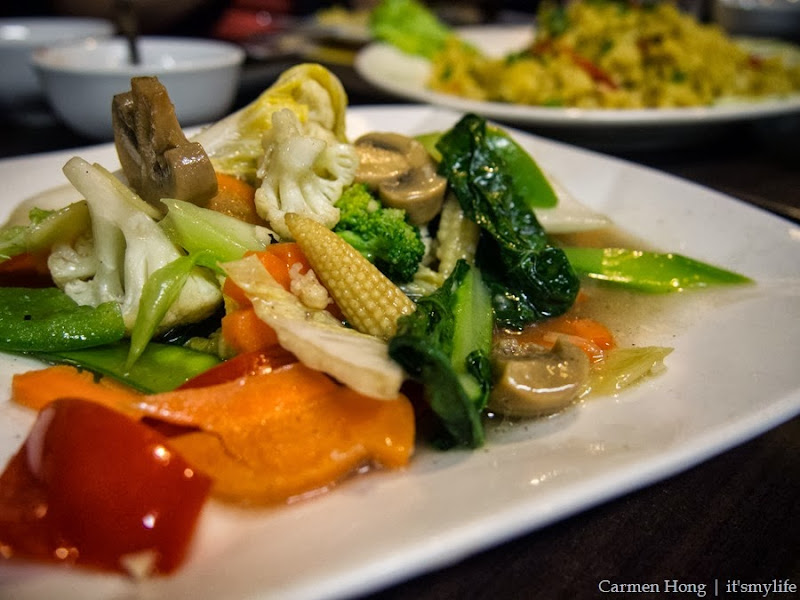 This tasted bland. Moving on… 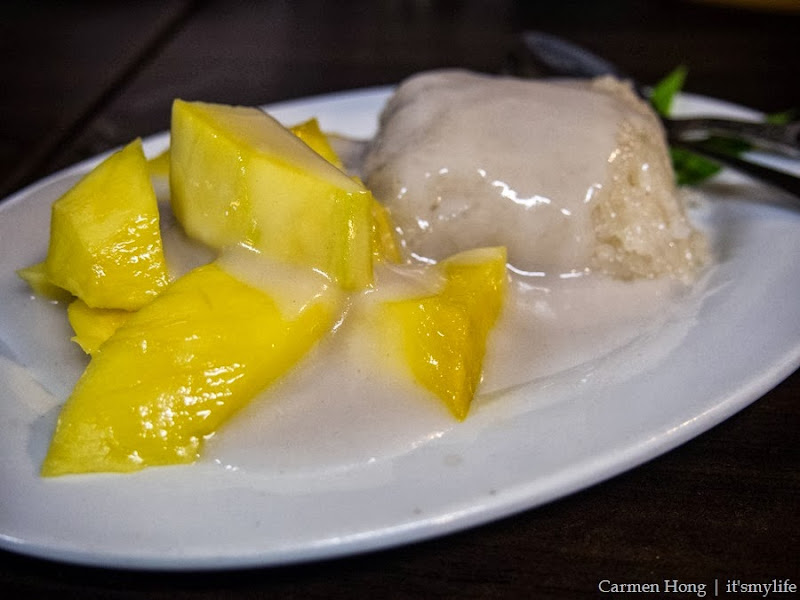 Mango Pulut | RM3.50 per serving
I have heard my friends talking about this Thailand dessert and how good it taste, but I never had the chance to try it up till now. Since it was my first, I really had no expectations of it. With that being said, I actually enjoyed eating it. I love how the sweetness of the mangoes complemented the tinge of salty santan over the glutinous rice. It was also sticky and soft at the same time. I really wouldn’t mind a second helping of this. 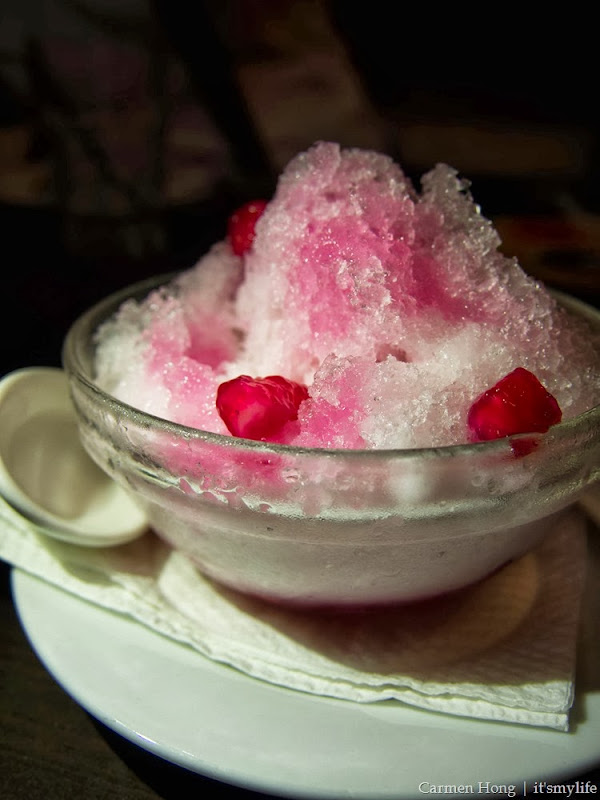 “Thap Thim Krob” | RM3.00 per serving
I’m actually pretty much clueless when I saw this on the menu, it sounds exotic as a dessert already. When it came, I found out that it was actually shaved ice served with santan, crunchy water chestnuts and jackfruit. If you know me, I pretty much stay away from most desserts or anything marginally sweet (with exceptions, of course). Then, i heard one of my friends saying it was way too sweet and he didn’t like it. I hesitated trying it, but I’m glad I did because it was too good. 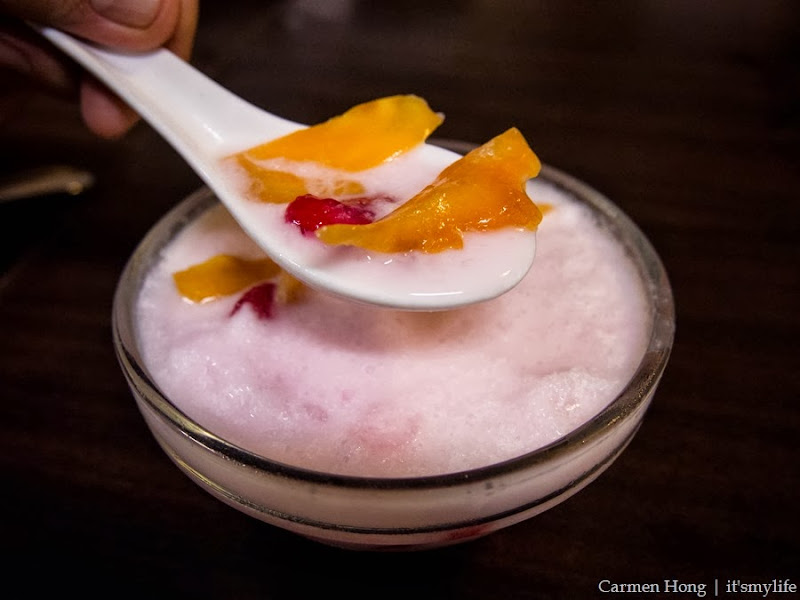 What was unique about this was probably the water chestnuts, can you spot it? It’s actually those tiny bright pink cubes. Those pink cubes are crunchy and chewy, because it is actually water chestnut coated with corn starch and then colouring were added to get the pink tone. Then, there is also the jackfruit which was really sweet. Coupled with santan and ice, it was a pretty nice combination.
* * * * * * * * * *
Overall, I would say that Krathong Thai Restaurant had more miss-es than hits. One thing for sure is that I have tasted way better Thai food before, and to benchmark the food I tasted there against to Krathong’s , then it will definitely fall short. The desserts there wasn’t too shabby, so if are around the area and wanted to grab some Thai desserts, you can try them here. 🙂
You can find them at D 1 & D2, Glass City, Jalan Radin Tengah, Bandar Baru Sri Petaling (011-1176 5202)
&. Thanks to Open Rice and Krathong Thai Restaurant for having me. +
Share