I have a sister, Clarrisha  who doesn’t look one bit like me and we’re both polar opposite, pretty much that. And she absolutely love all things Korean; she hogs the internet speed by watching the endless dramas, sings in Korean and even cook some Korean dishes. But there’s one dish that she hasn’t been able to cook and is the “dak galbi” dish. 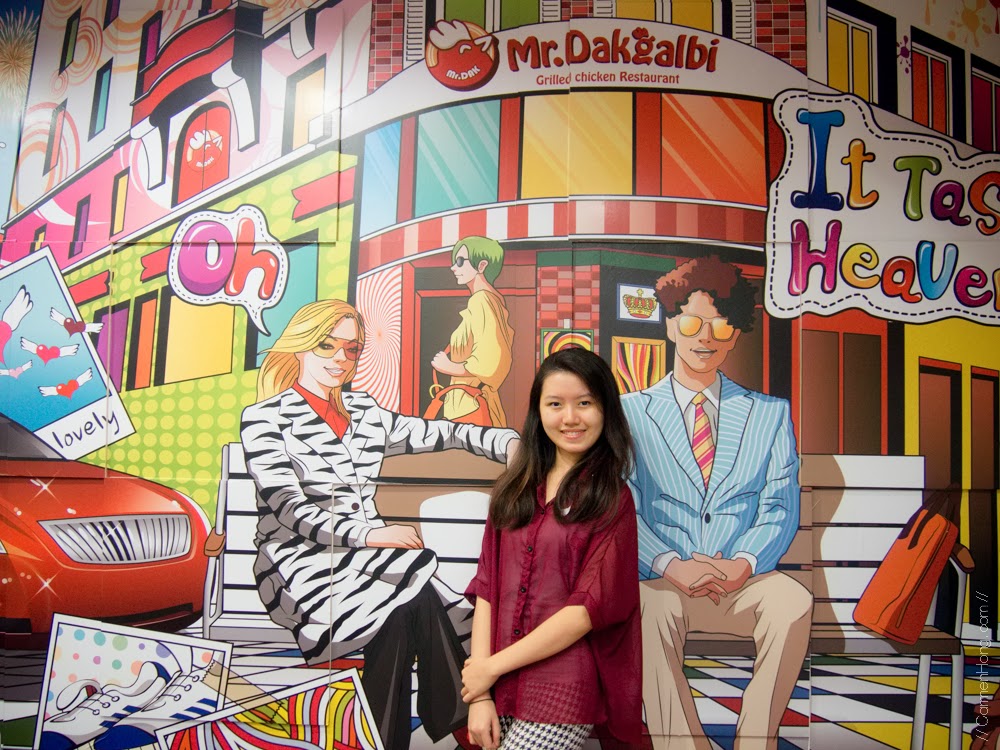 | Clarrisha, at Mr.Dakgalbi, Bukit Bintang |
And I never tried that before, in all my life….. until I went to Mr. Dakgalbi restaurant in Bukit Bintang. Actually, I didn’t even know what “dak galbi” was until I was inside the restaurant. I’m shameless enough to admit that, but hey, at least I’m being honest here. So, how was my first “dak galbi” experience?
* * * * * * * * * * 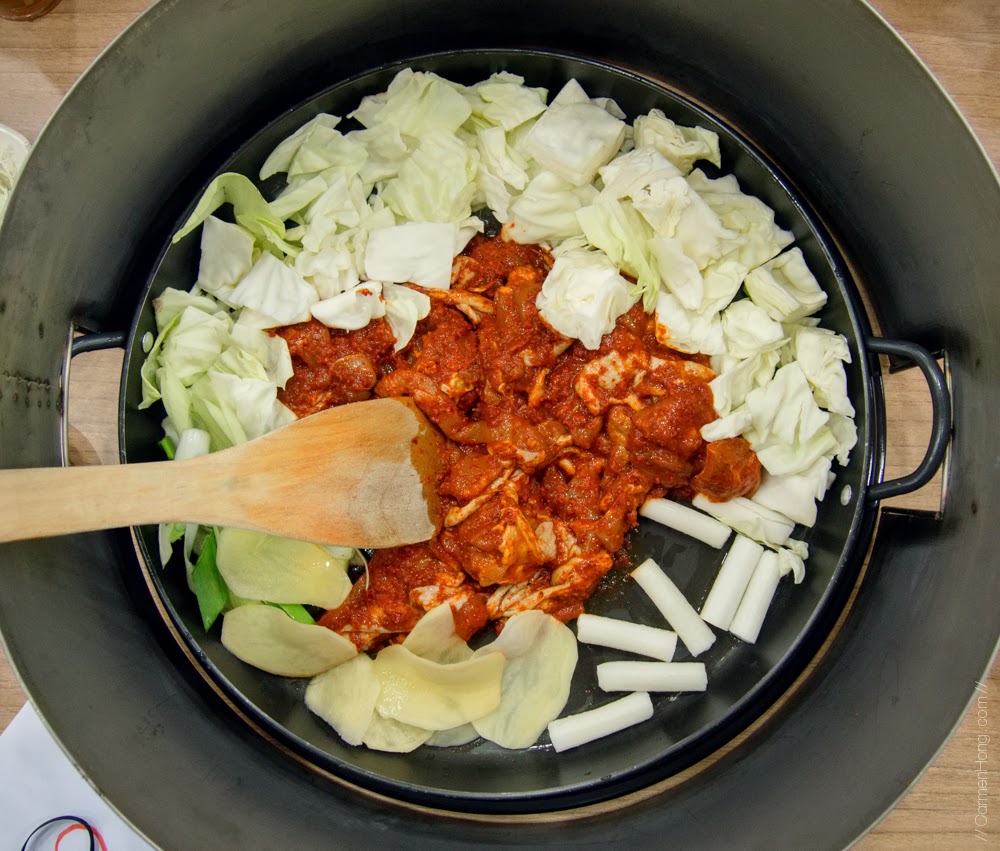 Mr Dakgalbi | RM19.00
You can see what the “dak galbi”  is made of from the picture. It is basically marinated diced chicken in a chilli pepper paste sauce, along with sliced cabbage, potato and tteok (rice cake) stir fry together on a hot plate. The waiter will bring in the tray as shown above, and then they’ll have a protective metal thingy around the cooker, in case the “dak galbi”  gets too excited. You’ll also be given an apron to wear to protect your clothes too. 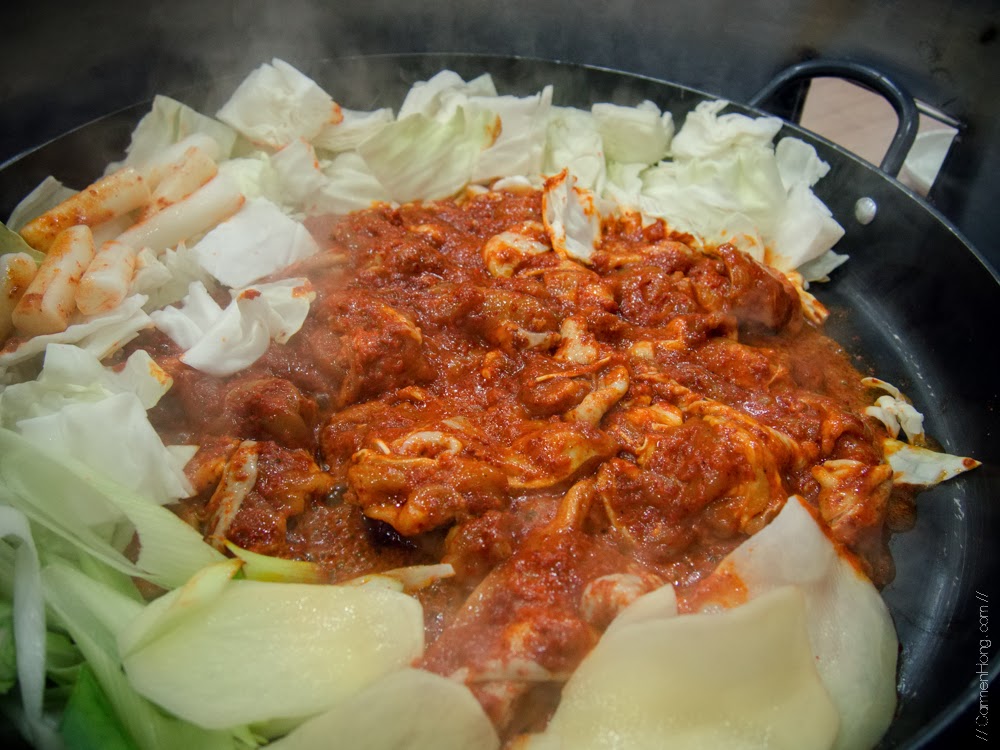 Then, it’ll be left to cook for a couple of minutes on the hot plate. At this point, if you’re actually like me (who can’t cook) and you’re afraid it’ll be burnt, you don’t have to worry because the waiter will be cooking it in front of you. This somewhat reminds me of teppanyaki, except this is exactly at your dinner table! 😀 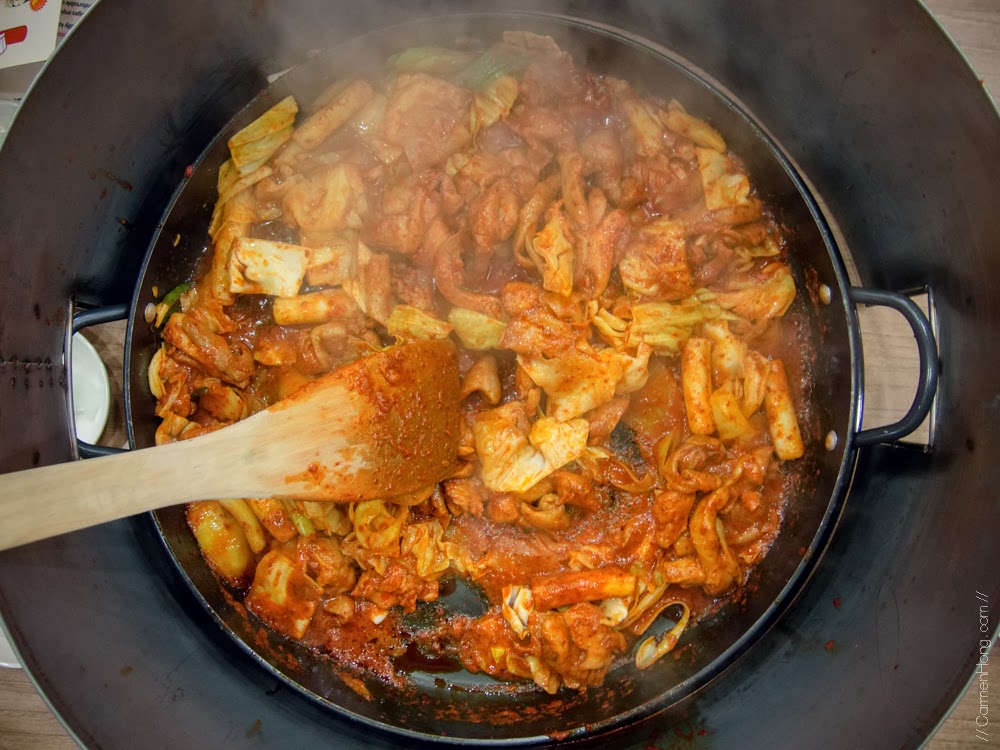 | This is pretty much how the “dak galbi”  looks like after being stir fried, and I will say this; it doesn’t look pretty. Haha. | 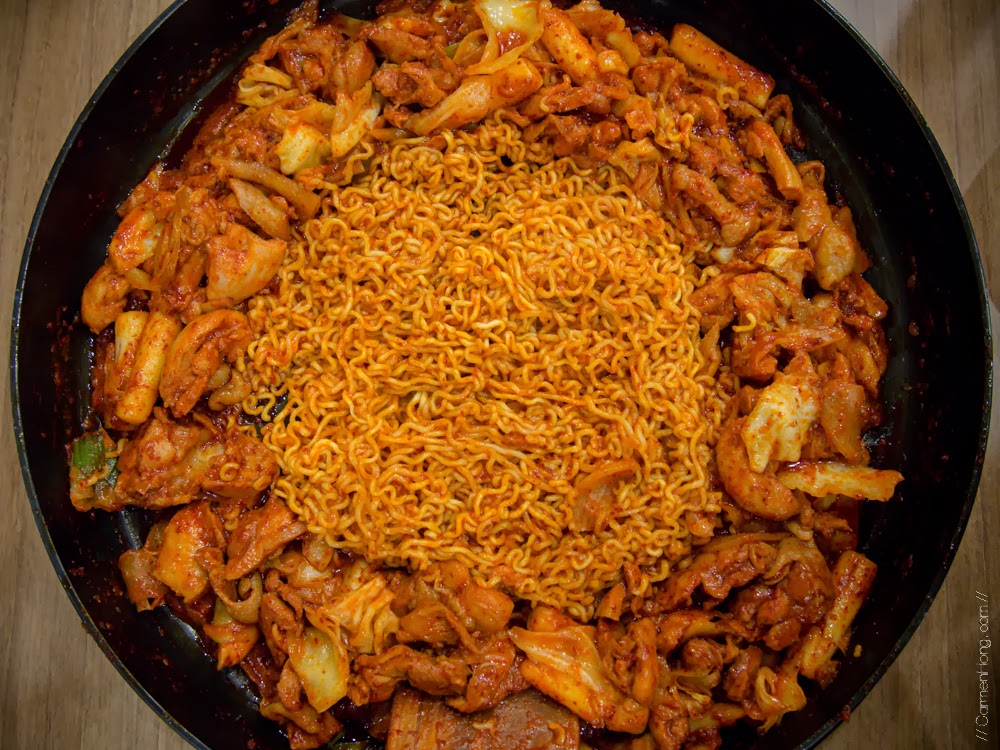 | And, TA-DA! Here’s how it looks like when it’s done. |
If you’re wondering where the ramen came from, there is an option to add that on at RM6.00. So, it’ll be stirred fry together with the chicken and the end results would be the above. I’d say this was something entirely new for me, it’s a rather unique dish. How does it taste like?
Firstly, I usually take spicy food although I can (it’s a preference thing). I found this a little too spicy for my liking, but I was informed you can actually let them know how spicy you’ll want it to be. I was also told that the secret chilli powder used here does have its benefits. Amongst it are helping to reduce weight, effectively prevents skin aging and reducing stress. Watching them cook this dish was a stress reliever already, so I can vouch to that. 😉 Other than that, I loved how well marinated the chicken was. I could just eat the chicken alone, or maybe with some white rice. The ramen was evenly coated with the chilli pepper paste sauce, if you love this sauce… You’ll just love everything of it. 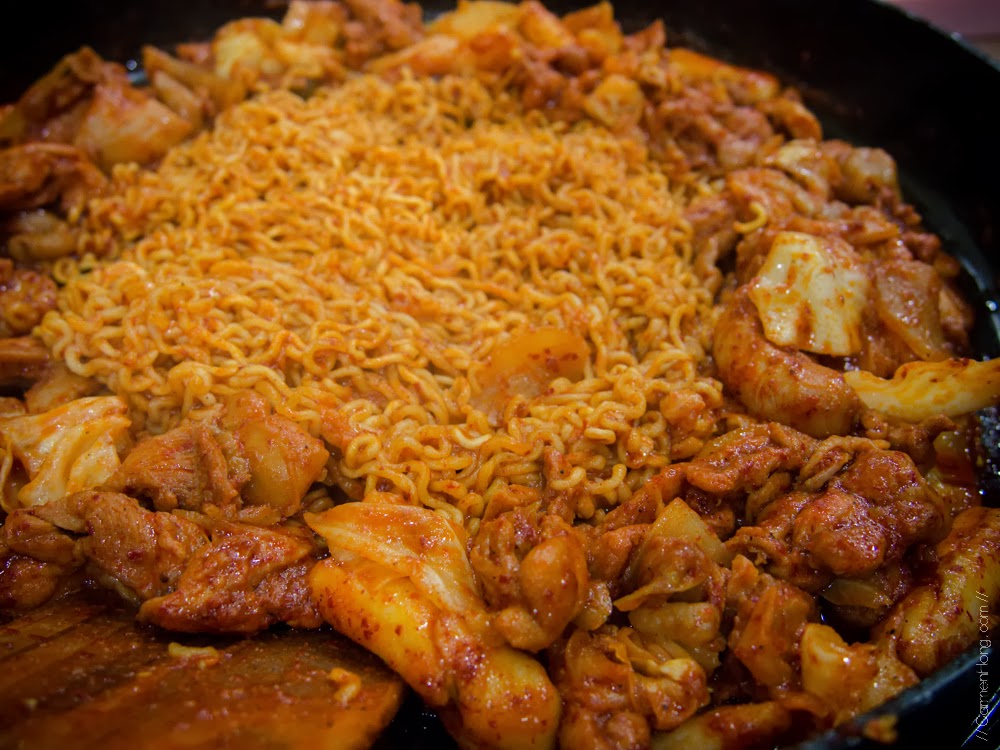 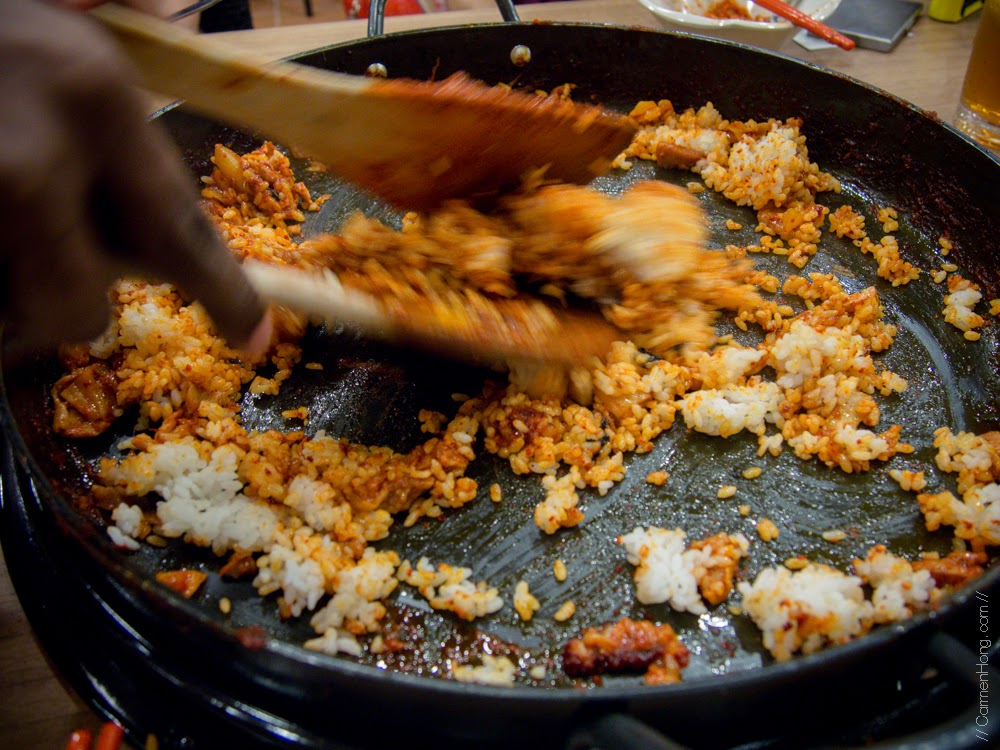 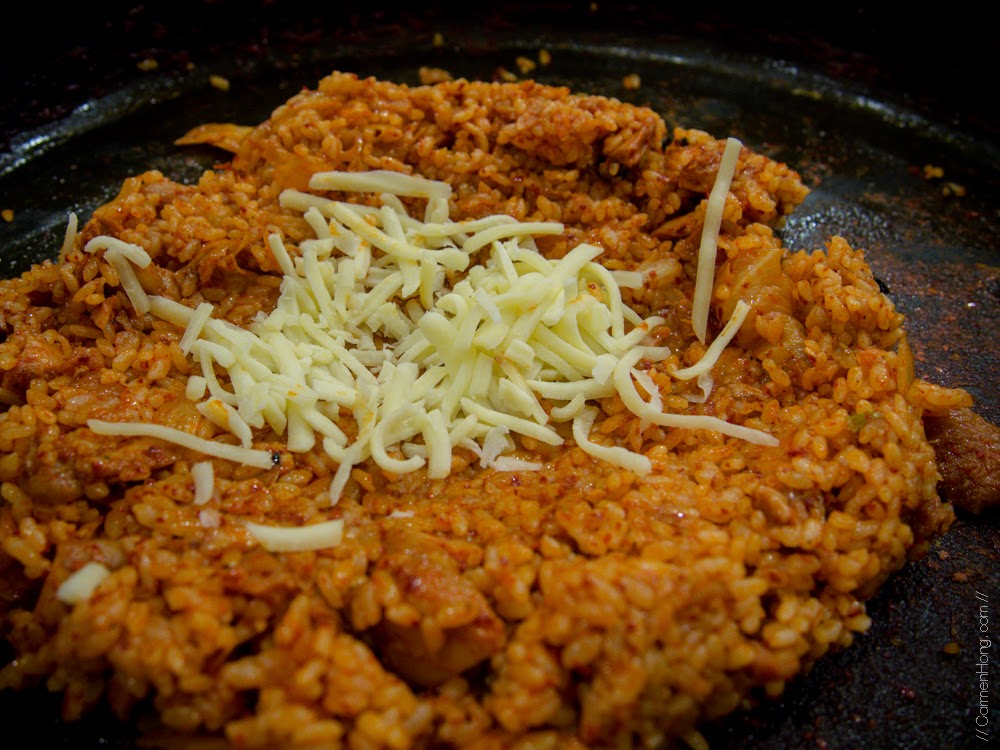 | Turns out you can make Pizza Rice too, by just stir frying the rice with sauce and of course, with plenty of cheese. | 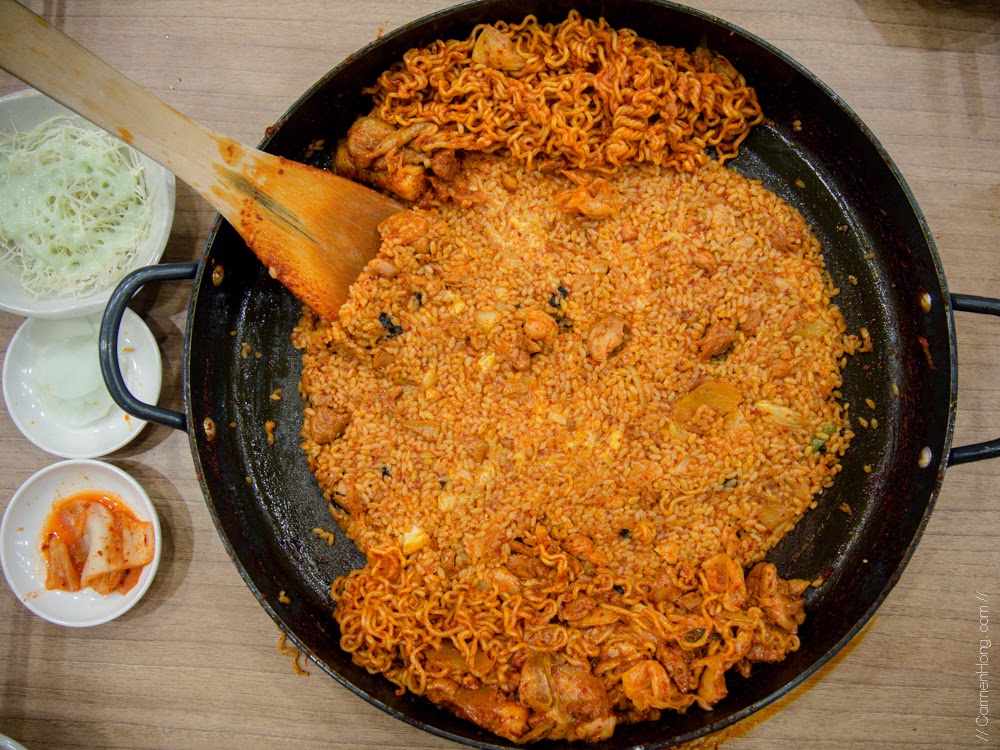 Jaengban-Noodles | RM17.00
And that basically wraps up the whole experience of eating “dak galbi”  in Mr.Dakgalbi, Bukit Bintang. I never seen one dish mutates into THREE different dishes right before my eyes, but hey Mr.Dakgalbi managed to do it! Haha, if you would like to see it and try it, you can always head on over to the place.
// Mr.Dakgalbi, Bukit Bintang //
http://www.mr-dak.com/
61, Jalan Bukit Bintang, 55100 Near Low yat Plaza  Bukit Bintang
03-6206 5567
Open from Monday to Sunday from 10am to 11pm
On Thursday to Saturday, closing time is 12am.
* * * * * * * * * *
Till next time,
xoxo
Share