I have recently been based around Puchong area for my work assignment and I am sure foodies out there would agree with me that Puchong is a mini food haven for many. I said mini because for me, KL as a whole city will always be my food haven. I’m actually planning for an ultimate full day street food outing for my friends come November, where we go out and eat KL’s best street and hawker food. I can barely wait for that. So, back to Puchong, I am actually pretty unfamiliar with that area because it is one area I would avoid for fear of getting caught in jams and what not. I have this constant impression that everywhere in Puchong is constantly jammed up.
Anyway, we were in the Bandar Puteri Puchong when one of colleague pointed out this place called “Old School” where they serves pork pork everything pork. Basically, their speciality is pork dishes. From the looks, I thought the place served western dishes. But it turns out that they actually serve a variety of Malaysian dishes like the ‘laksa’ and ‘nasi lemak’ too. Think of it as a kopitiam basically, they have kaya toast too.
I finally had a chance to give the place a try on a fine Friday afternoon. When I sat down, I realised that the restaurant had the school-like concept in mind. You can see it from the deco on the wall, to the menu and finally on the waiters/waitress and even the manager. The waiters and waitresses were dressed in school uniforms, complete with the typical white school shoes and the nerdy glasses too. And you’ll find the manager dressed in blue, much like how the prefects in schools used to dress like. So, you get the whole school like atmosphere there although the chairs and tables were more to the modern ones.
When it came to deciding what to eat, I was spoilt for choice because there was so many different type of dishes but one dish caught my eye and it was the Old School “Grilled Pork Cutlet”. I did a quick Google check on that dish just to see if it was any good. I read one blog which said it was nice, so I decided on that. As it turns out, my colleagues had decided to order the same dish. Haha.
* * * * * * * * * * 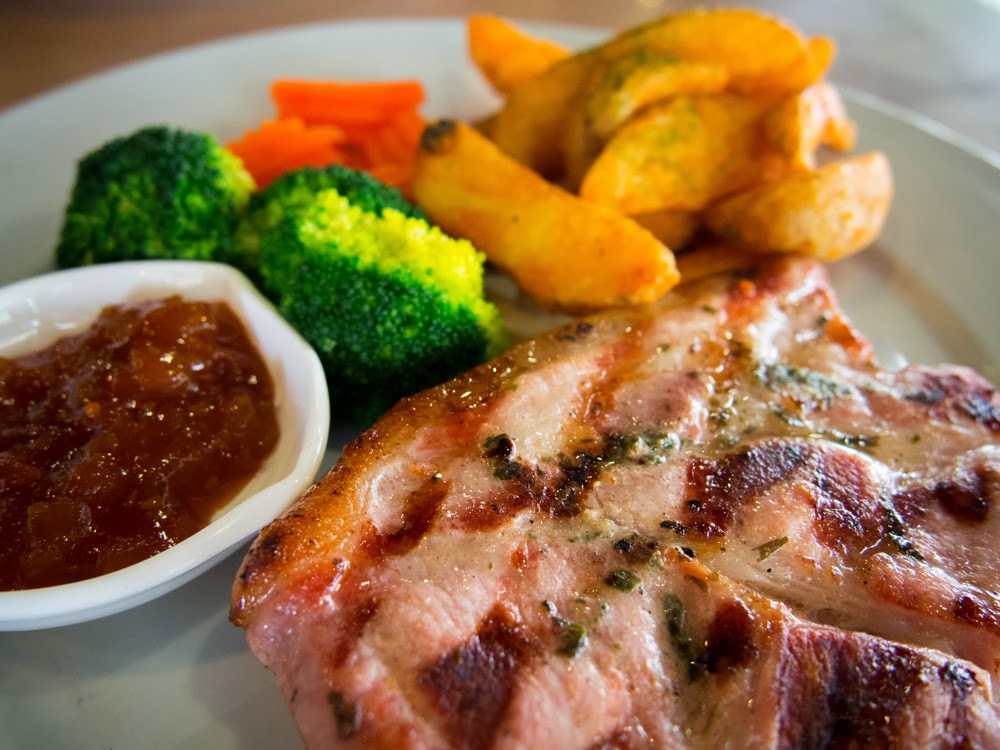 
When it arrived, I thought the steak looks really good even though it lacked an obvious accompanying sauce with it. The steak comes with vegetables, wedges and tomato chutney sauce. It looks extremely simple and one anyone could make too. Like most steaks, this came in a thick juicy slab of meat but from pictures, it looks a tad bit small. However, for someone like me, I found the whole meal quite filling. I managed to finish everything on the plate, feeling a little bit bloated. 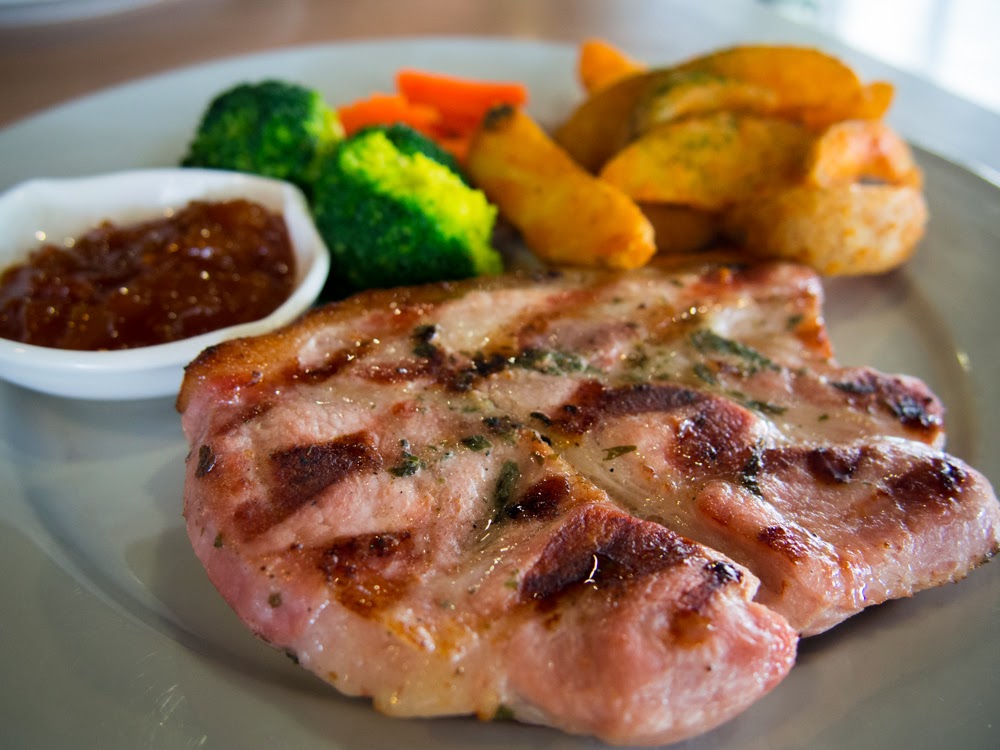 
How did I find the pork steak? I loved it, every bit and every bite of it. I was quick to judge that the steak would taste normal and meh, because of how simple it looks like. But it was a very well marinated piece of steak with just herbs (it seems). I cannot pinpoint exactly what else was used, but it does seems like just herbs, salt and pepper. The meat was grilled to well done, I don’t think you’d want to eat pork steak medium cooked anyway. It was still juicy and chewy. There was a thick layer of fat on the steak but it didn’t taste like disgusting fat when you ate them. I don’t know how to describe but the fat was kind of those that melted in your mouth type-ish. 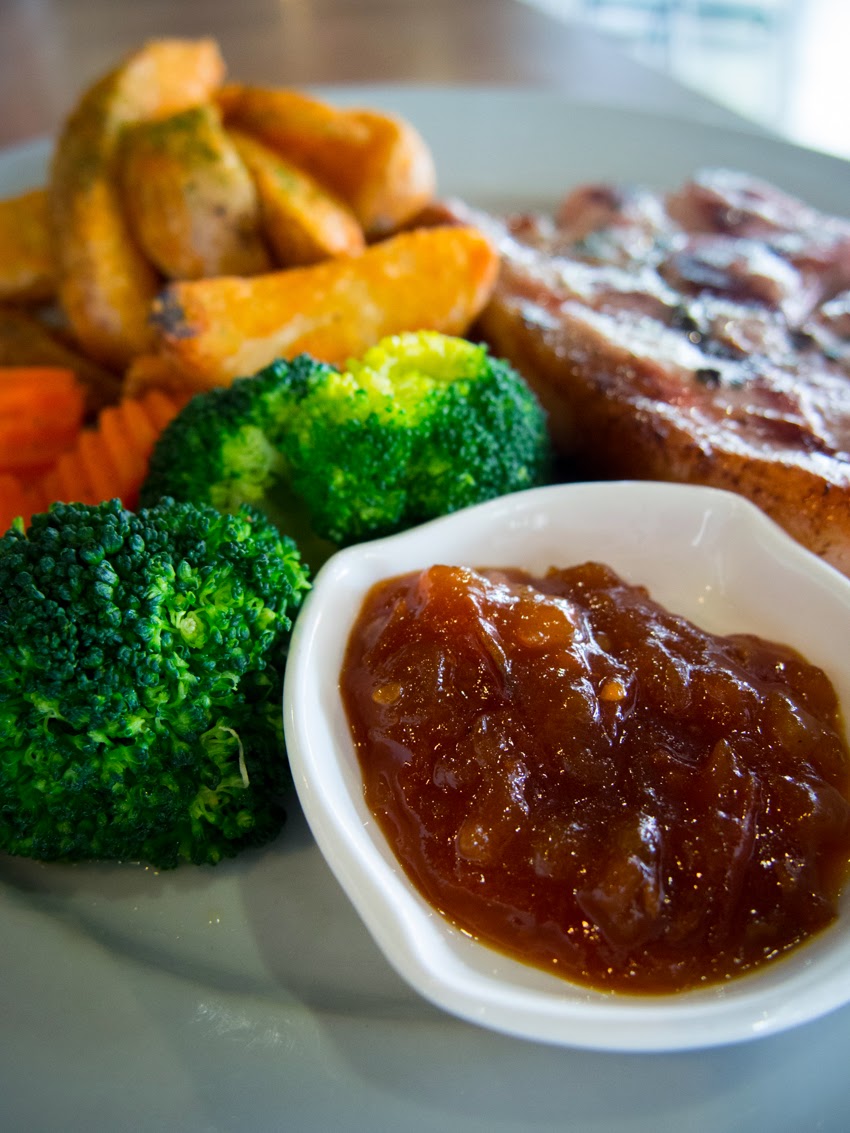 Grilled Pork Shoulder Steak | Tomato chutney sauce
The sauce itself from something rather unique, I think I have only tried mango chutney in my life. Surprisingly, the sauce went really well the steak. It gave it that tangy taste which complimented the steak. But I liked the original herbs taste of the steak, which is why I ate most of the steak as it was.
The vegetables that came with it seemed to be just steamed and tasted almost bland, which I liked actually because then, the tastes would not clash too much. As for the wedges, I love them! It was super crispy, yet it wasn’t too dry.
Here is a couple of more pictures of my food, including a top down picture of it (much inspired from Instagram). I’m on Instagram by the way, follow me at @itscarmenhong if you haven’t! 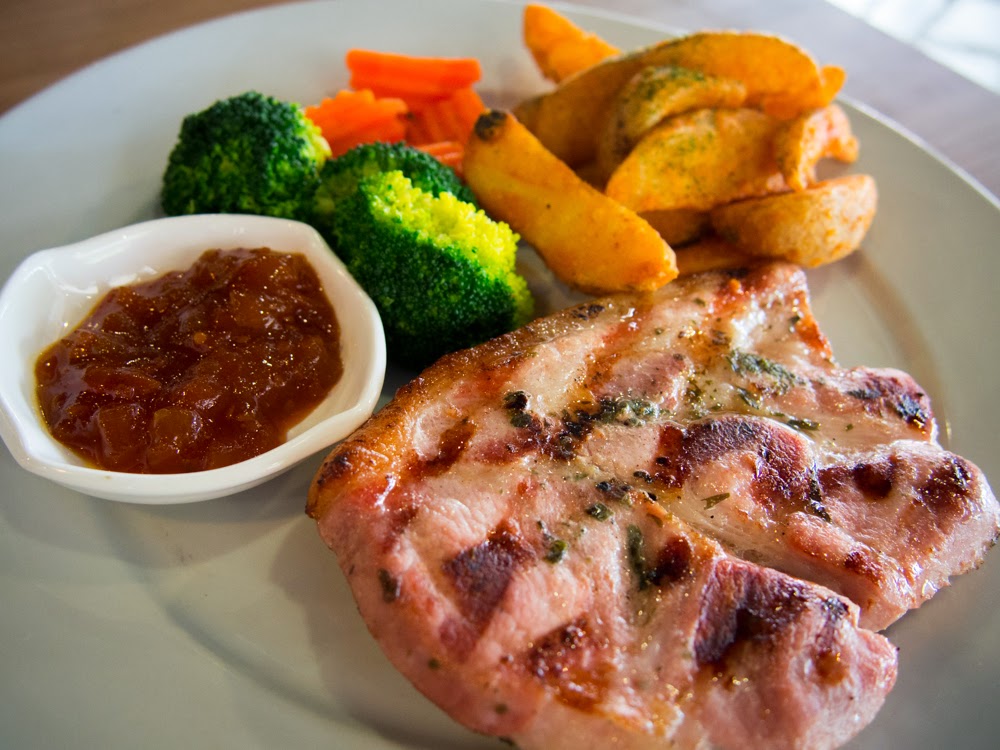 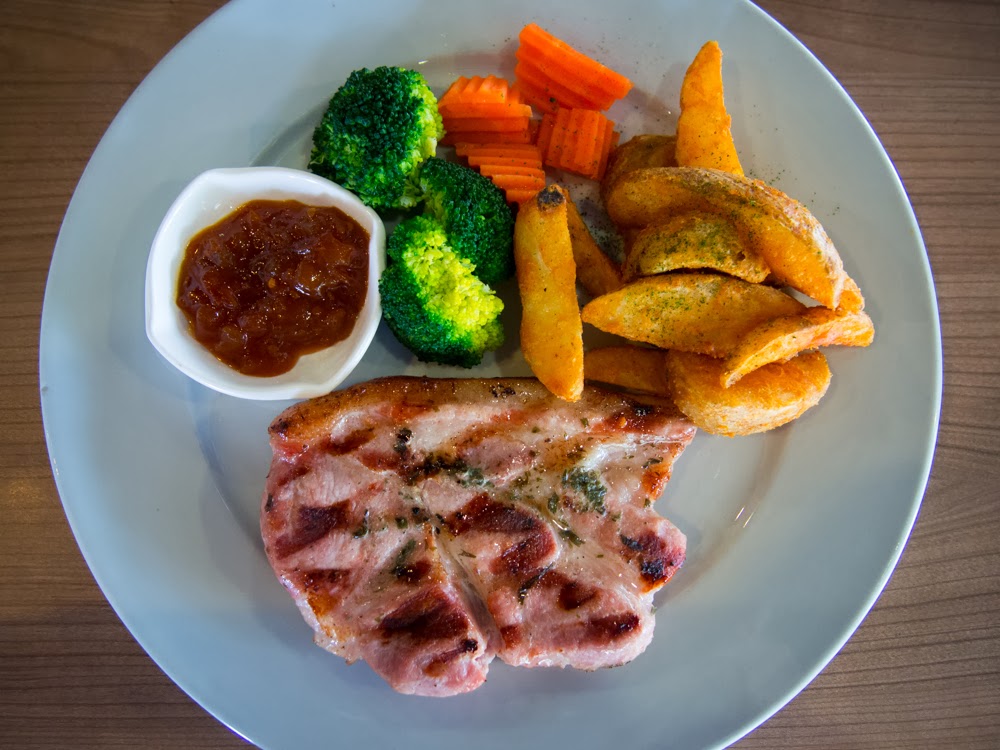 Oh, I forgot to mention that this restaurant specializes in pork dishes. Their tagline is “It’s pork, it’s good! I will definitely head back there one day to try their other dishes. 🙂 Who’s up for it? Let’s head there together.