With the wet, rainy and cold season lately, my comfy sweater have been a staple in my everyday wear together with a new favourite comfort food. No prizes for guessing it right because it’s so obvious. None other than steamboat itself, those boiling hot pots of yummy goodness helps to keep the body warm during dinner and oh-so-delicious. Yums! Which is why it’s probably not surprising that I have been having them every other day. I have a couple of usual places to head to for steamboats and top on the list is Ho Ho Steamboat (they have the best soup base ever!) and Hometown Steamboat (try the porridge with the fermented bean curd sauce, it’s so damn good).
But it looks like I might add on another restaurant to the list, and it’s called San Hui Wei located in SS2. Completely honest, I find myself getting turned off by any restaurants located in any area which begins with “SS”. I have very valid reasons to, because more often than those areas are often congested and parking is always a bitch. I visited the restaurant on a working day for dinner, so needless to say it was jammed to get there but surprise surprise we were lucky to find a parking there. 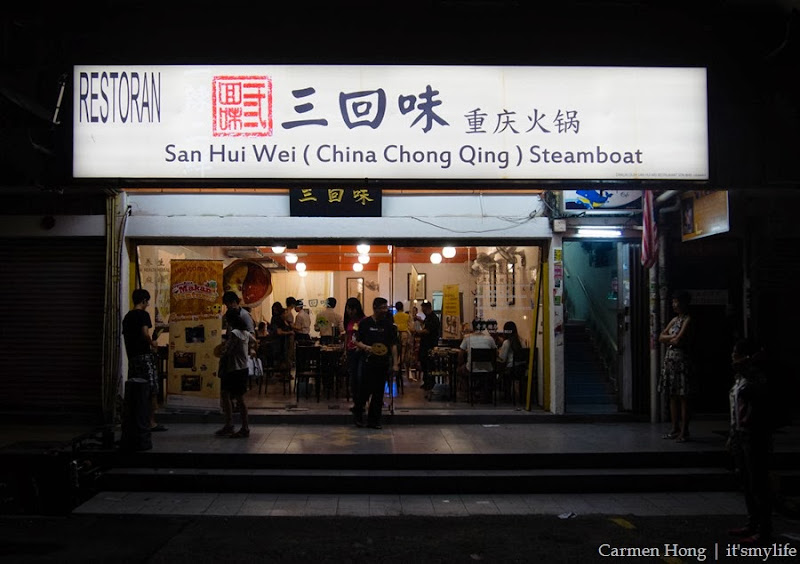 I should mention that this restaurant is not just another steamboat restaurant because it serves an authentic Chongqing style steamboat, whereby a special spice known as “flower pepper” or Sichuan Pepper is added into the soup, combined with chillies which makes it spicy. So, the key difference from this place compared to others would be the soup bases. 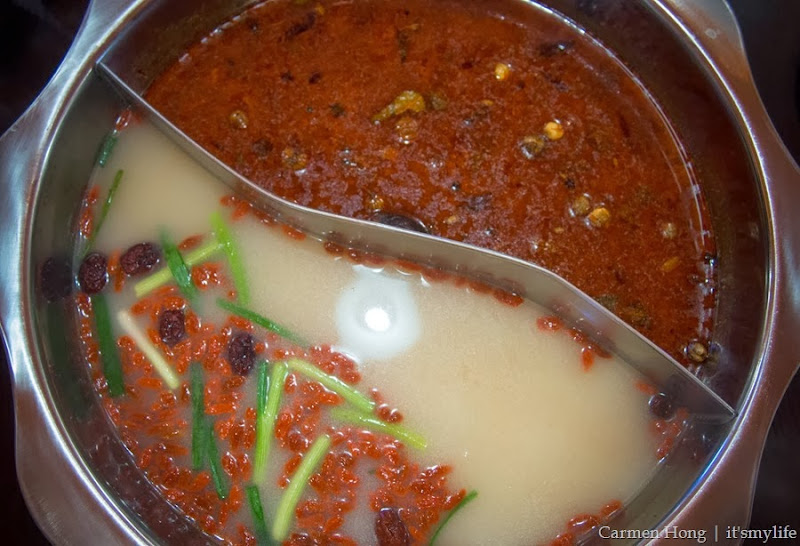 The clear soup base is called the Chinese Herbal broth and in my very honest opinion, tasted like the Maggi mee chicken soup flavour. But this obviously the better version, sans the MSG and has tonnes of herbal ingredient which can be seen from the picture above. The other soup pictured is the Hot & Spicy broth which is more familiarly known as ‘ma la’.
It was tad difficult to photograph it because you can clearly see the thick layer of chili oil on the soup, which kind of freaked me out. It was too oily for steamboat! But I was reassured by the manager that as these oils gave the soup its taste and as you begin putting in the ingredients, the oil will add flavour to the ingredients. I took his word for it and hoped for the best. Haha. I’ll be writing a short description on the fresh ingredients that were served, I won’t be going in too much details as it’ll probably bore you. 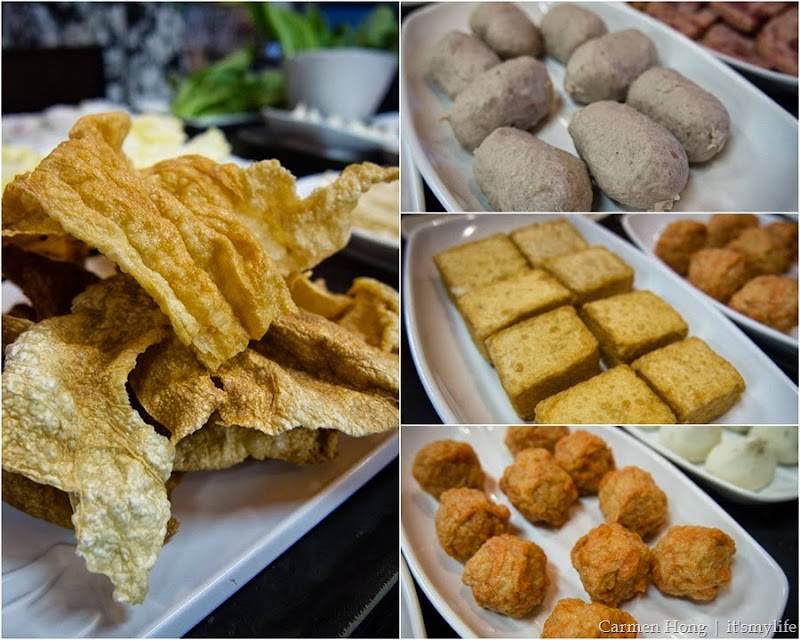 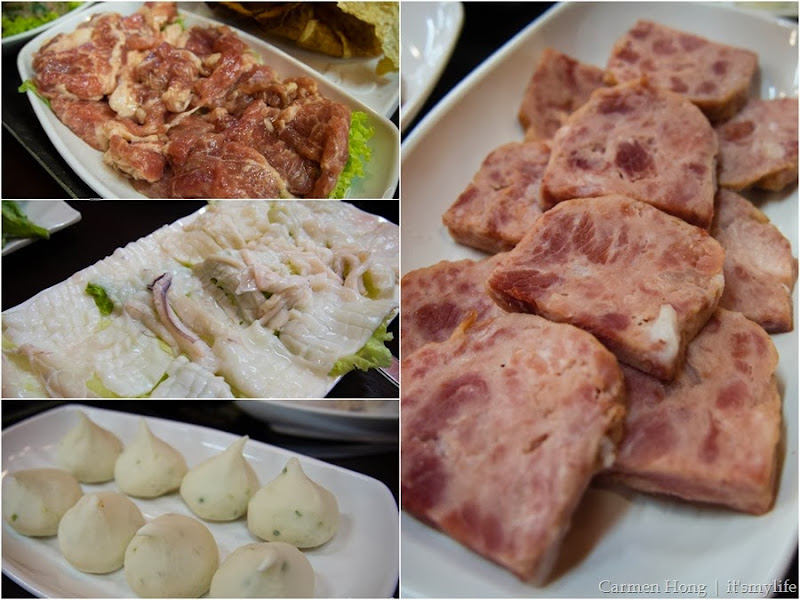 Left to right (clockwise): Pieces of marinated pork in corn starch, premium luncheon meat with chunks of pork meat, cheese balls (I don’t recommend this though, the cheese was powdery) and squid.
Now, let’s move on to something made in house. The following two items are made fresh, and by the chefs of the restaurant. 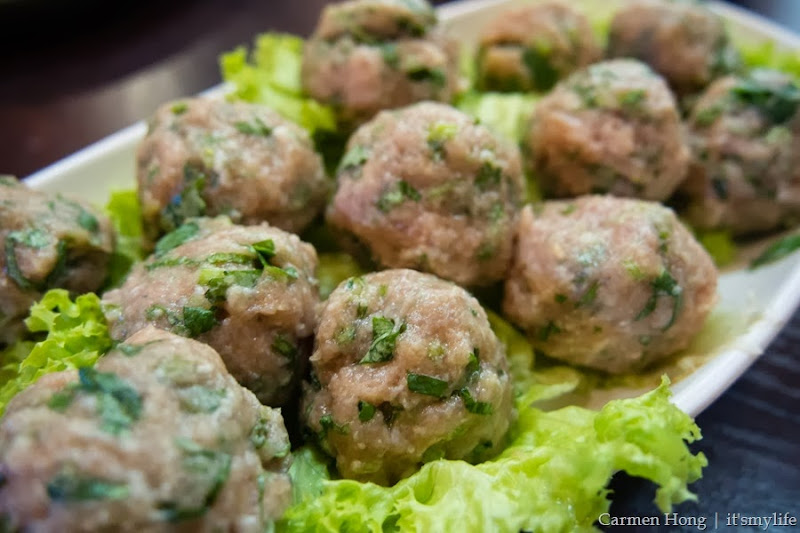 How do I describe this without using the word yummy 5 times in my sentence? The truth was that was it was, it was delicious. Made-in-house, you’ll find the meat sticking together and it doesn’t fall apart easily. It was juicy and bouncy to chew on. Since this is the parsley version, you’ll find plenty of parsley in the balls but fret not, there isn’t an overwhelming parsley smell. 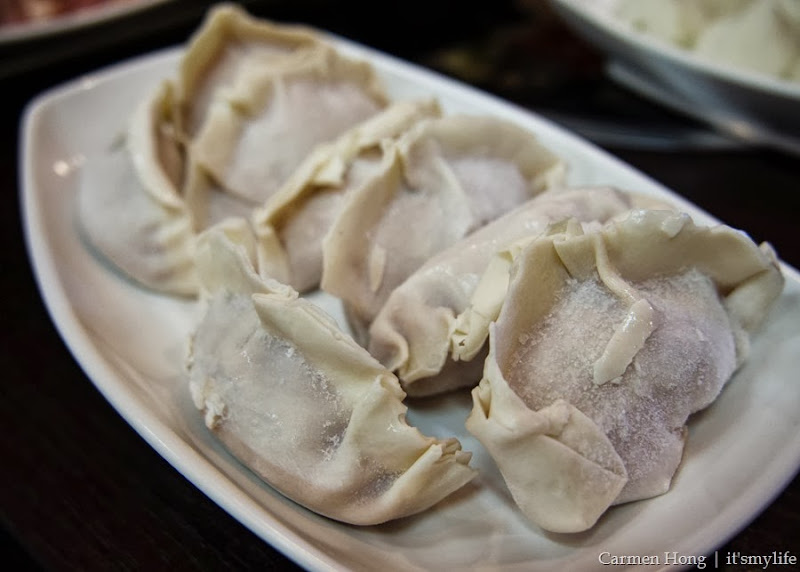 It’s funny how I saw them making fresh dumpling using the Gyoza skin, but when served they look like they have been taken out from the freezer. I’m not sure how much the frozen ones will affect the taste of the dumplings but they seem to be pretty tasty to me. The pork base used is somewhat similar to the Parsley pork ball except without the parsley and this is wrapped in a Gyoza skin. Still delicious, nevertheless. 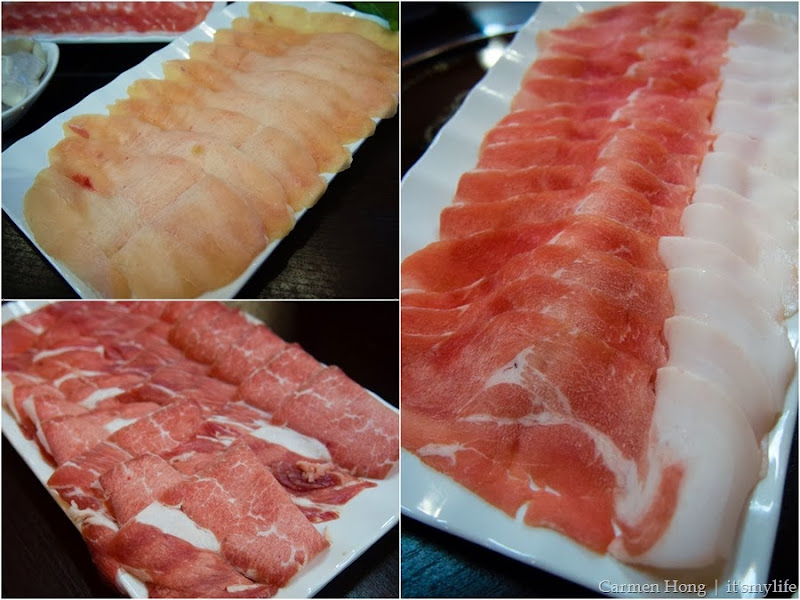 Another must have(s) at steamboat would be none other than the thinly sliced cold cuts, pictured above is the pork, mutton and chicken (first time seeing this!) slices. These were nice and the chicken slices were unique. 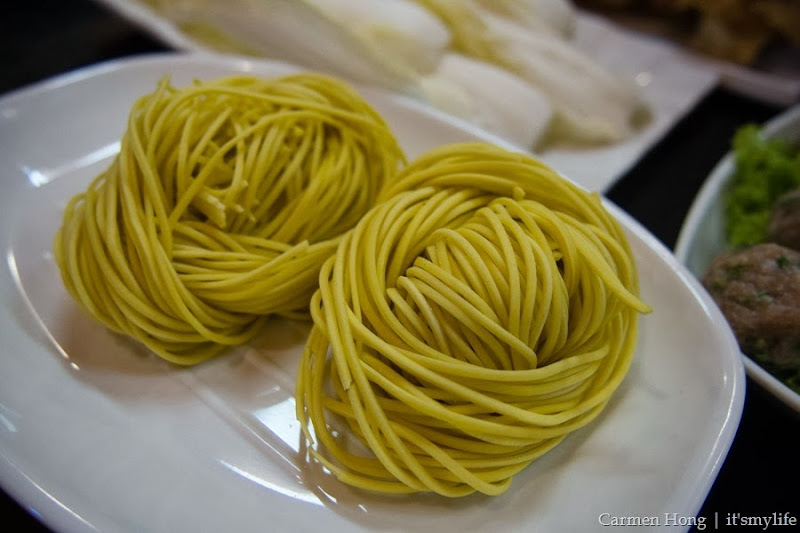 Also, the noodles above is not your typical yee mee served, but one that is imported from Thailand. When cooked it is much chewy than yee mee, but I’d still prefer the usual one over this. Mostly because this Thai noodles doesn’t compliment the soup that much. 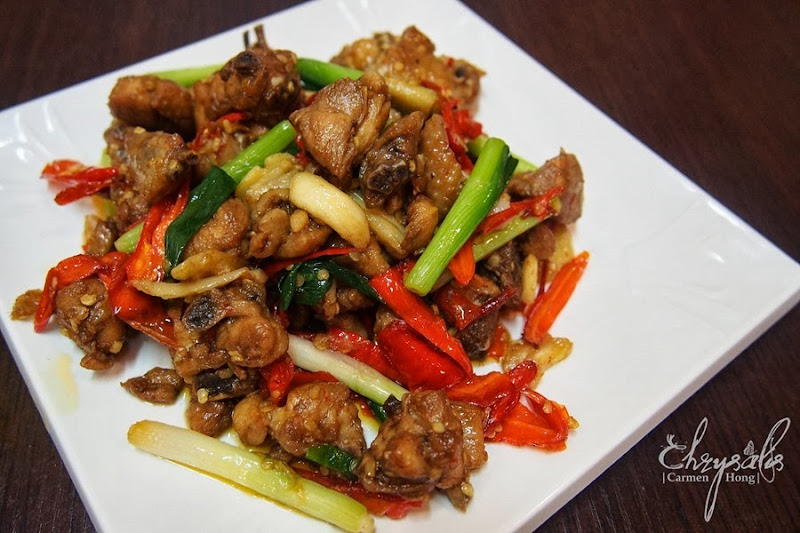 This (Super) Spicy Chicken has awesome written all over it, although it may not look like it. It does look like any other dish except this is loaded with tonnes of chillies, enough to make your lips burn after eating them, make you sweat buckets and yet, you’ll want to eat more of it despite the torture you have to go through. This will leave you begging for more with every bite, every burst of spiciness. I don’t understand the logic, but my friend said this was supposed to happen with spicy food. Lucky enough for me, I had more than a couple of servings, without suffering from swollen lips or stomach ache the following day. I would still have this the next time I’m here. This dish, however is not officially on the menu but you can request for this dish from the kitchen.
* * * * * * * * * *
Overall, I loved the authentic taste of the Chong Qing steamboat experience. For steamboat, the broth is extremely important and for me, that is what makes or breaks the steamboat is that. I mean it makes perfect sense that if the soup base is good, the whole steamboat experience and taste will be awesome. Haha. Oh, by the way, one other unique thing you’ll find in San Hui Wei is that their utensils are cleaned, disinfected and then wrapped in plastic. So, you can be assured that everything is really clean. 🙂 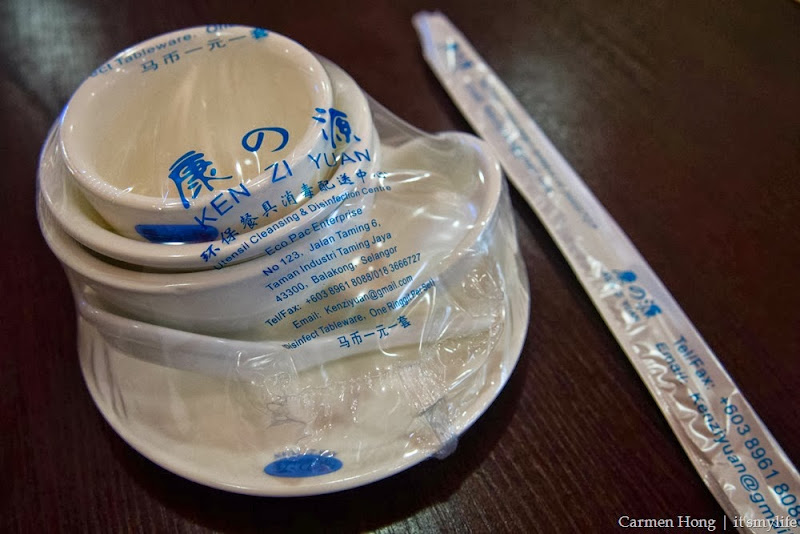