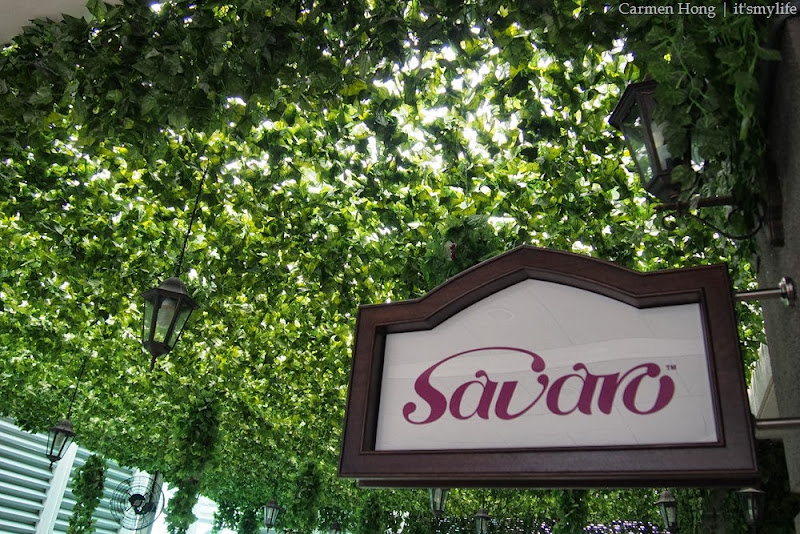 I am back in Solaris Dutamas yet again for another round of food review. I have this theory that have yet to be proven otherwise that Solaris Dutamas or Publika is the best place to have a good meal. This time, I headed to Savaro by Felda. And yes, you read that right. This restaurant is an initiative by Felda to introduce local delicacies (and some Western food) in a more posh and fine(r) dining like setting.
* * * * * * * * * *
S O U P 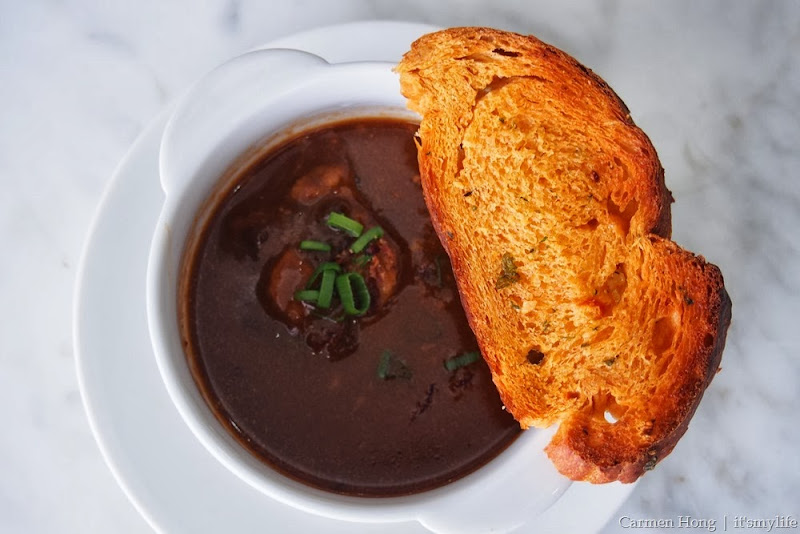 Oxtail Soup | RM13.80
We started off with a serving of Oxtail Soup, something that I have never tasted anywhere. This was my first time trying out oxtail soup but I was smitten with the first slurp. It was a hearty, rich soup. There is a chunk of beef in the soup and it is served with a special artisan bread, The bread was crispy and it complements the soup superbly. I have no complaints for this soup except maybe the portion was too little.
M A I N (s) 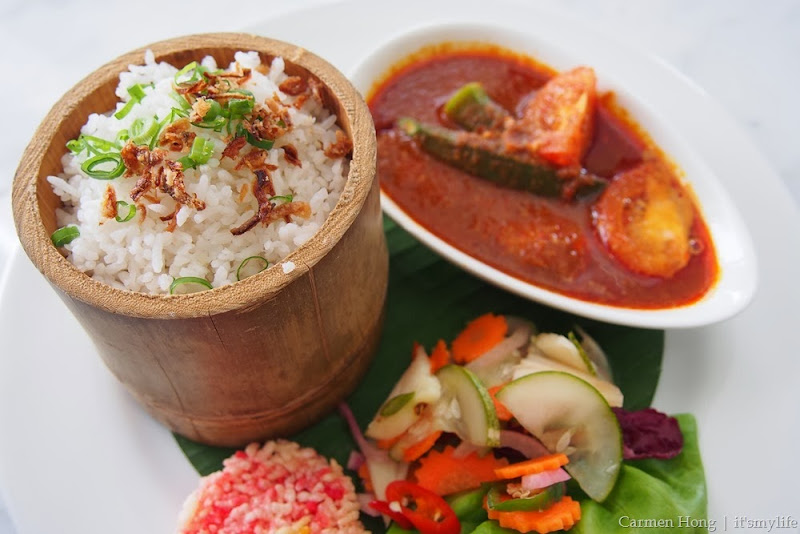 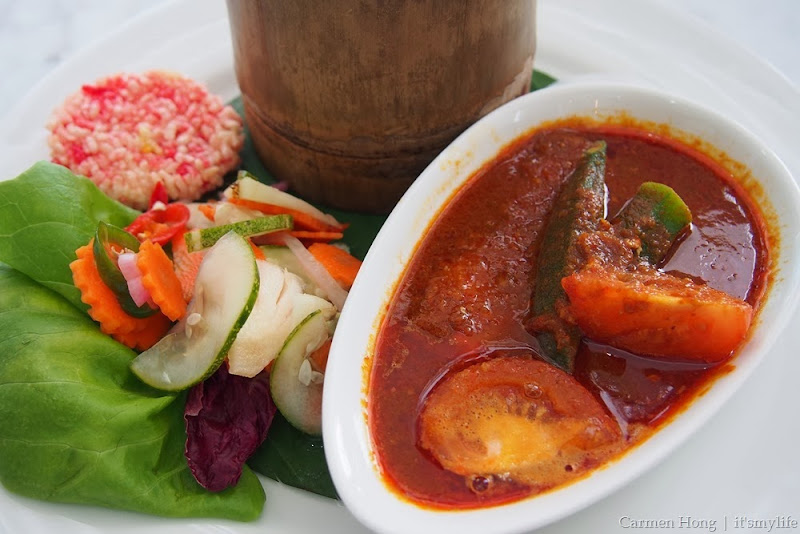 Assam Pedas Fish | A close up on the fish.
This dish is served with the Bambu Savaro Rice, which is a special locally-grown steamed rice, with pickled fruit chutney (acar buah) and Palembang crackers. I liked the Assam Pedas Fish but I found the fish a little too hard. It was as though the fish was kept frozen too long. Other than that, the serving of the fish is half of a fillet, which is too little for me. 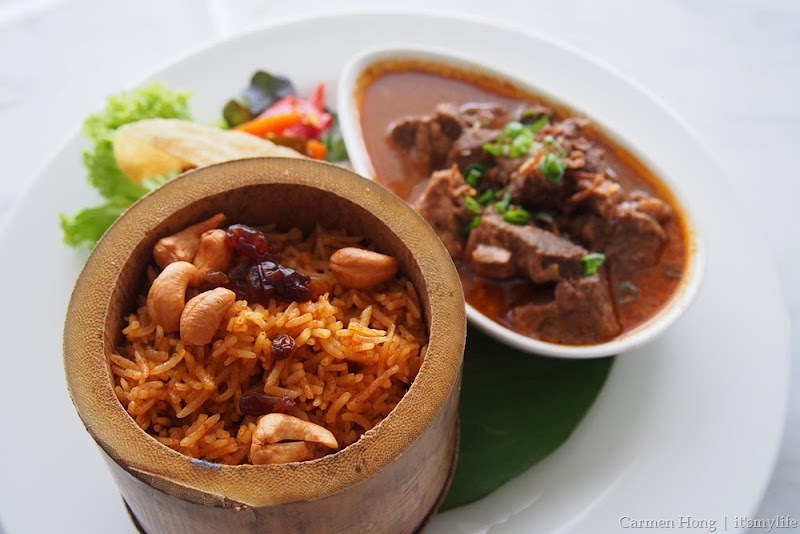 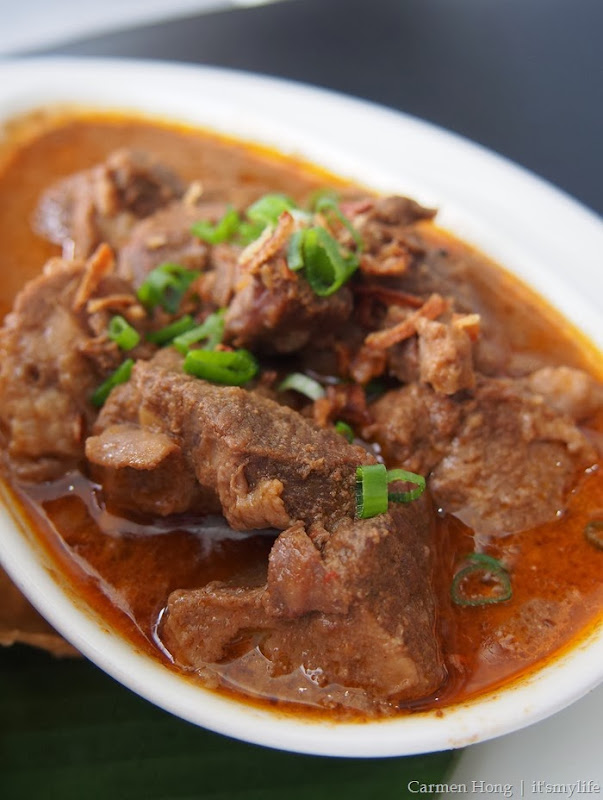 Bambu Lamb Briyani | A closer look on the lamb.
This is served with Basmathi rice topped with raisins and cashew nuts, spicy acar and the all-time favourite Papadom cracker. This lamb dish was delicious, with the meat tender and with just a right texture for the sauce, in the sense that it wasn’t too thick. 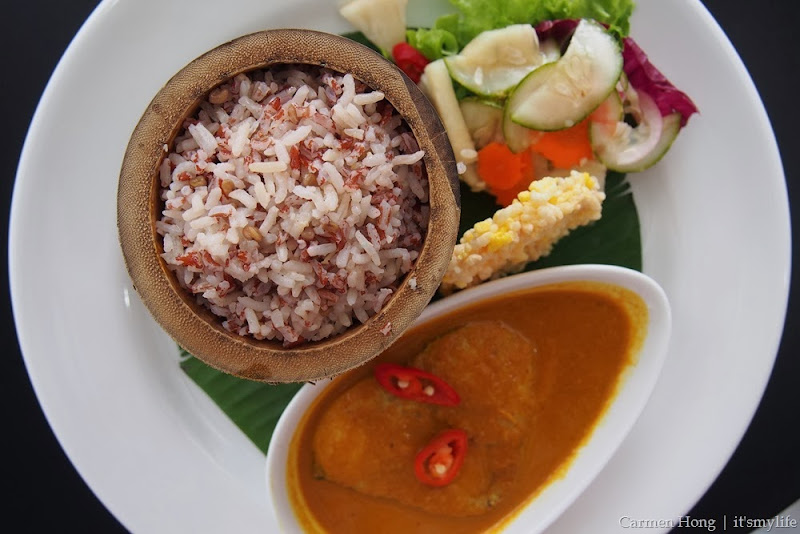 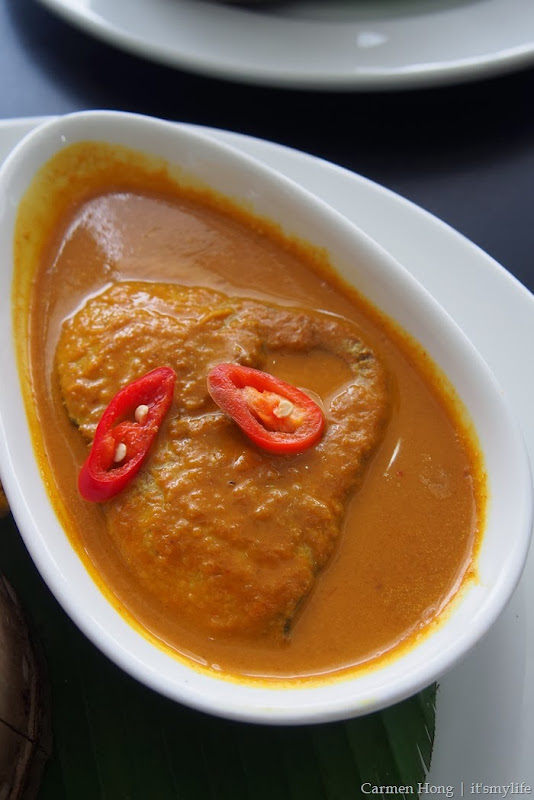 Bambu Dagang Rice | A closer look on the tenggiri fish curry.
Similar to the Assam Pedas Fish, the Bambu Dagang Rice is served with pickled fruit chutney (acar buah) and Palembang crackers. But the rice here is the “Dagang” rice instead of the usual white rice. I quite liked the fish curry sauce but I found the fish a bit too salty. It was as though it have been marinated with salt before it was cooked in curry. My comment on the serving size is just as the Assam Pedas Fish. 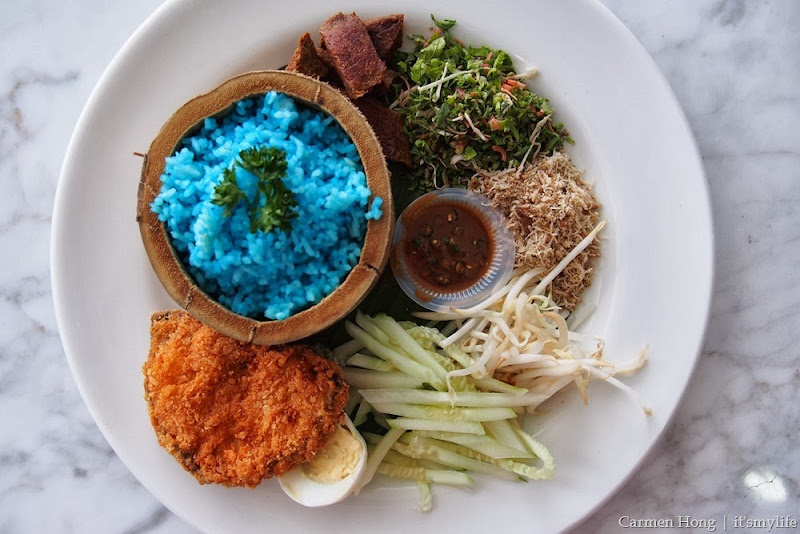 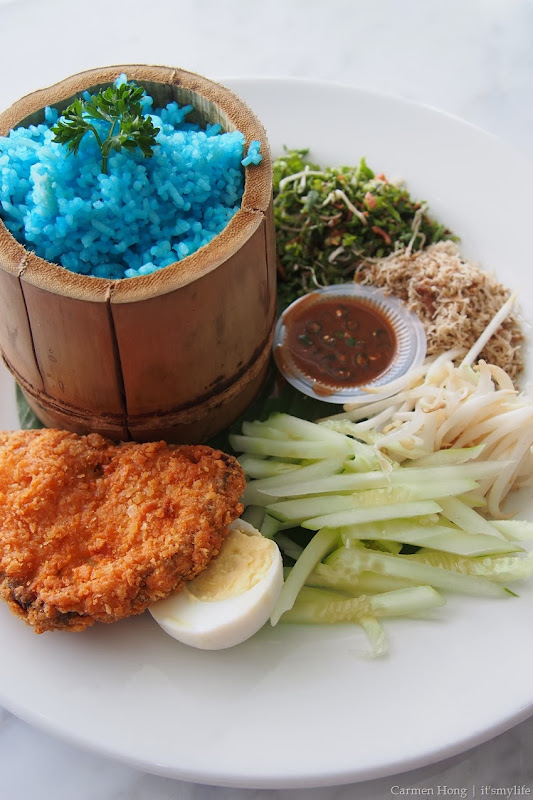 Bambu Kerabu Rice | RM18.80
Savaro’s version of nasi kerabu is slightly different from the usual ones that I’m used to. For a start, the blue rice is so much richer in colour but I was assured that it was tinted naturally with the Telang flower. The Bambu Kerabu Rice is served with fried breaded Tenggiri fish, slices of smoked beef, egg, ulam, toasted coconut shavings, fish sauce (budu) and fish crackers. The other difference was the breaded fish, which was more of a Western style and that normal egg was served instead of the salted ones as stated in the menu. 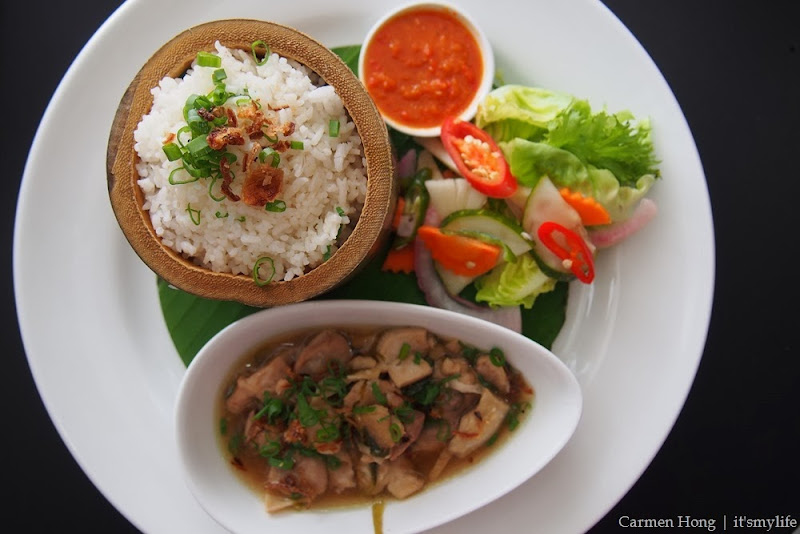 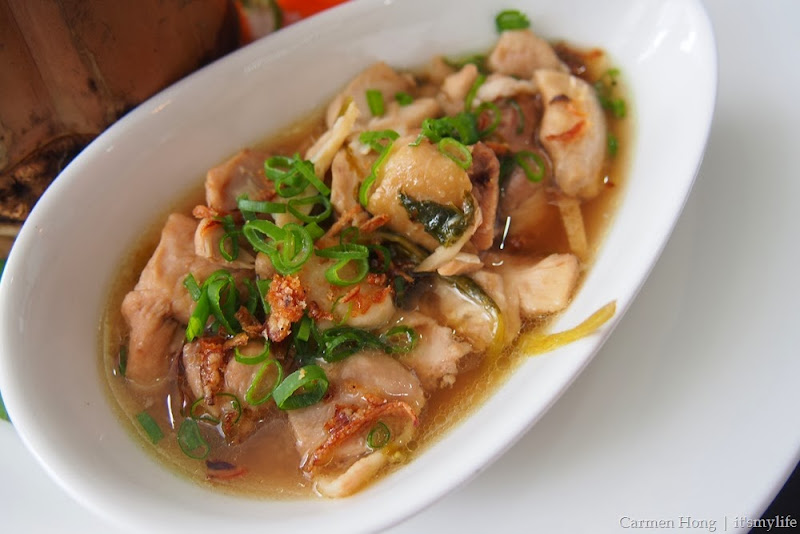 Bambu Savaro Rice | Close up on the minced chicken with ginger.
If you haven’t guessed it yet, this dish is actually an Oriental Chinese dish. My mom’s version would have involved some black fungus too. Similar to the Assam Pedas Fish, the Bambu Dagang Rice is served with pickled fruit chutney (acar buah) and special home grown steamed rice, along with some Chinese chicken rice type of chilli sauce. The chicken was a bit bland and plain in my opinion.
N O O D L E 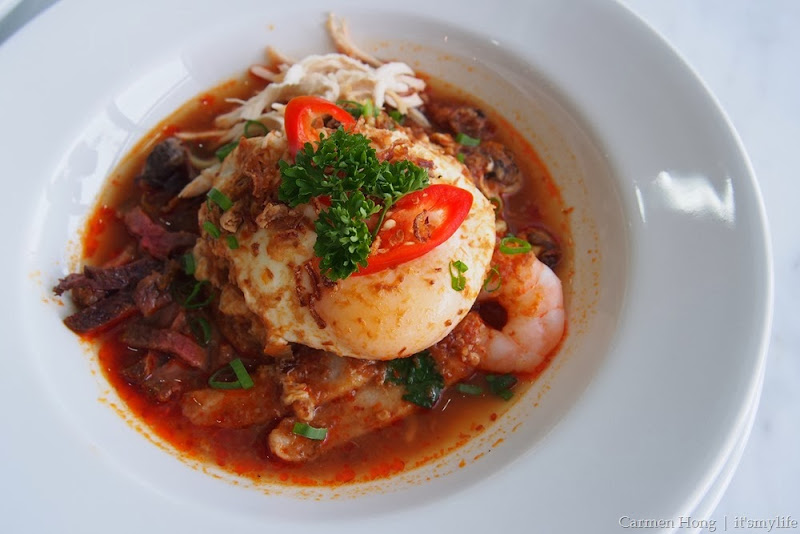 Savaro Noodles | RM13.80
This dish uses the yellow egg noodles in a special prawn based gravy, topped with boiled prawns, slices of roast beef, shredded chicken, cockles, vegetables and half boiled poached egg. The egg is half boiled so it is best to burst the egg yolk and mix it with the gravy immediately after it’s served. The Savaro Noodles is almost like a milder version of mee rebus that I have tasted. Overall, it was still a nice dish.
P A S T A 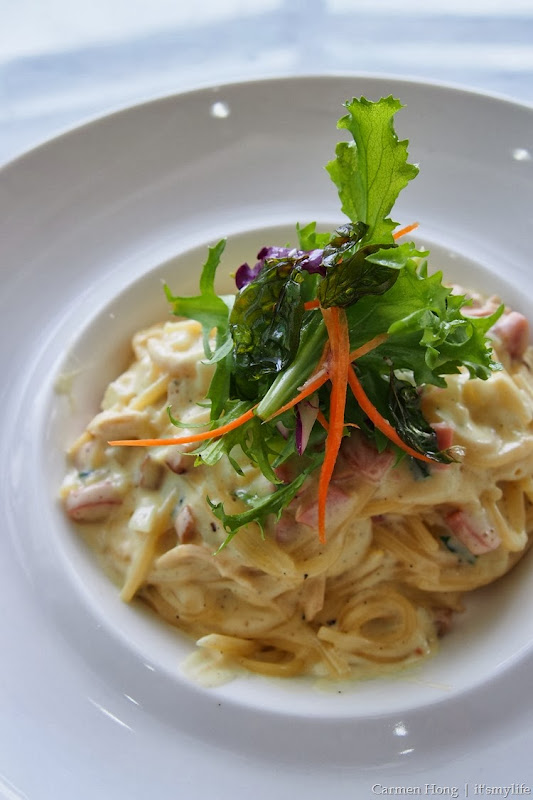 Chicken Carbonara | RM19.80
You almost can never go wrong with pasta in carbonara sauce, unless you made them far too creamy. This was the case for Savaro, with the sauce too creamy and thickens when left for a while longer. But I was told that they used parmesan cheese and hence, that made it thicker. Taste wise, it was spot on, lovely pasta dish with rich flavours.
S A T A Y 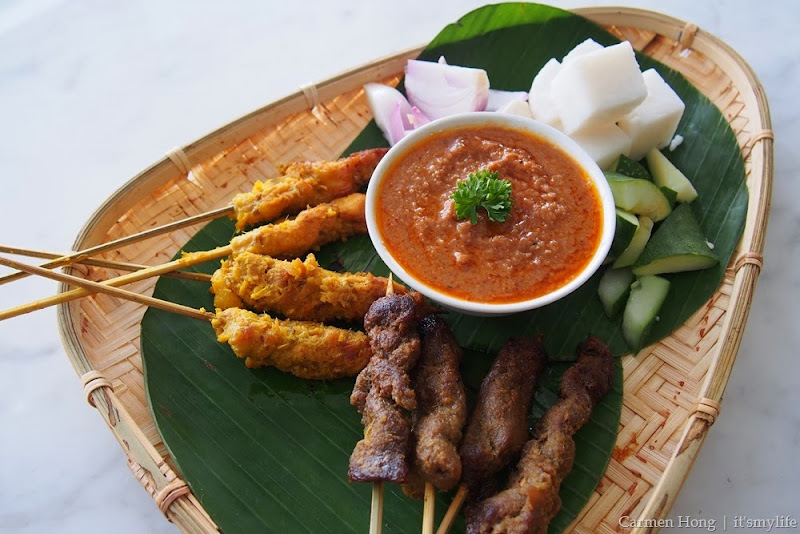 Savaro Satay | RM12.80
Pictured above is the chicken (left) and beef (right) satay, where generous chunks of meat was used. Served with the typical peanut sauce, cucumber, onions and rice cubes. Can I be super honest and say while this was okay, I would still prefer the ones from the real or the original satay man in Kajang? :p
D E S S E R T (s) 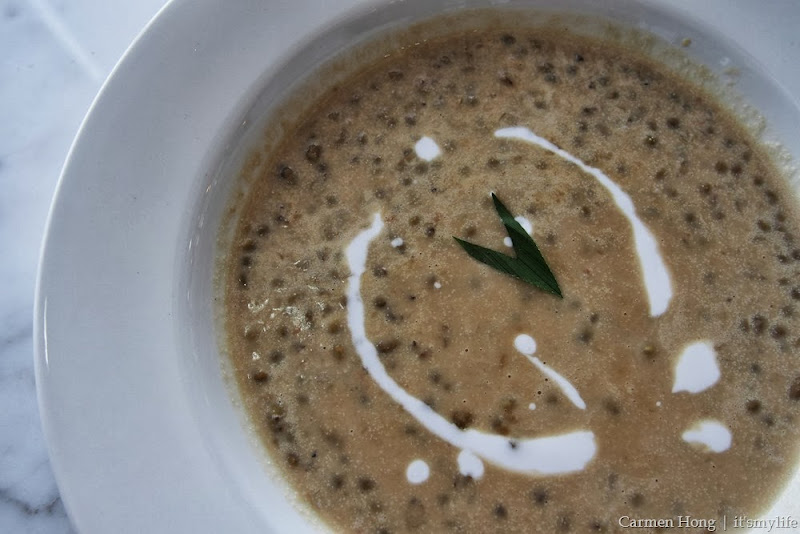 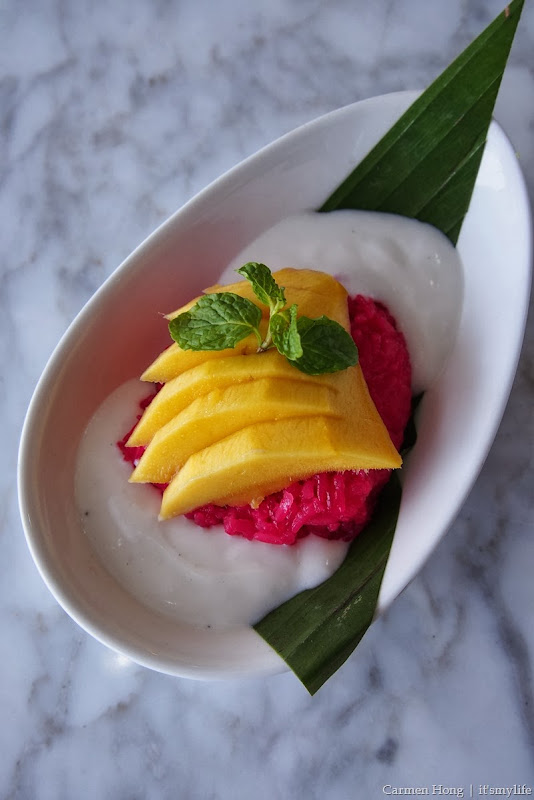 Tropical Sticky Rice | RM6.80
For desserts, we had the Bubur Kacang and Tropical Sticky Rice which I felt was pretty okay by my standards. For me, there were average desserts, nothing much to shout about but nothing too shabby about them either. Honestly, desserts really aren’t my favourite. I just love photographing them. Haha. Carmen’s logic.
D R I N K 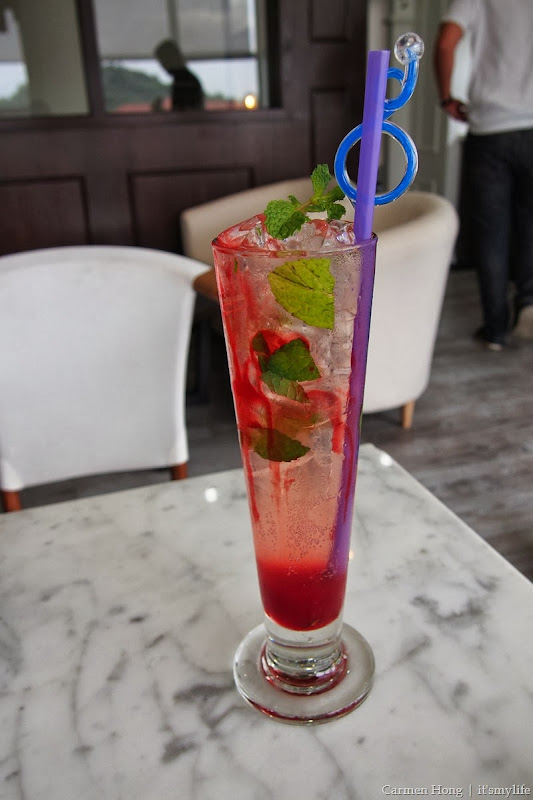 Savaro Soda Lime | RM9.80
In Savaro, their most recommended drink is the Savoro Soda Lime, also known as SS Lime which is a specially made fruit punch using strawberry extract and lime juice topped with soda water, kaffir lime and mint leaves. This looks almost like a Bloody Mary when it was served, but that’s just the rich and sweet strawberry extract. To enjoy this drink, you’ll need to stir the drink well and crush the mint leaves, because if you don’t you’ll end up just drinking the sweet strawberry extract.
* * * * * * * * * *
So, how did I find Savaro by Felda? Can I tell you what my honest first impression was when I first heard of the place? No, just no. It was just an impression and a bad assumption I made, and frankly I was glad I went to the restaurant because I was proven wrong. The food was good although there were some notable misses and room for improvement in some, but if anything I love most was the presentation of the food. Most of the dishes have the most beautiful presentation despite being really normal everyday Malaysian food. I always find it extremely tough to photograph Malaysian food, because they are almost never visually appetizing. Either that, or I am a horrible photographer. Well, I’m still learning. 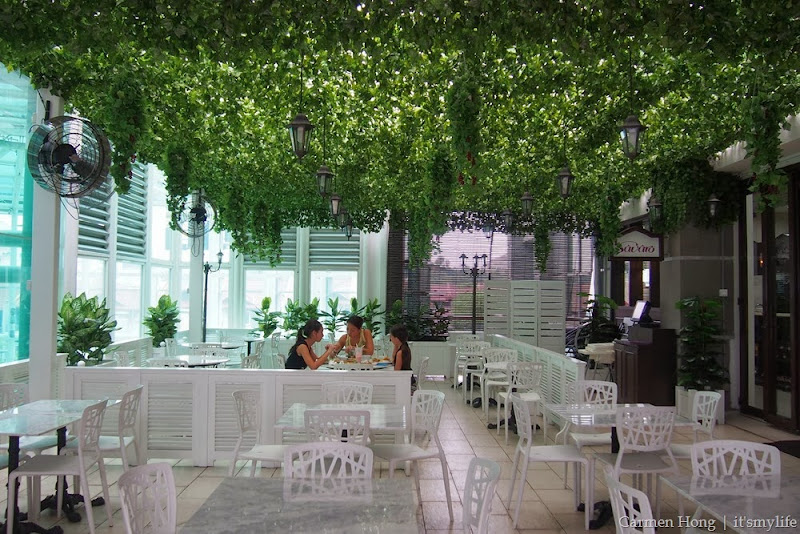 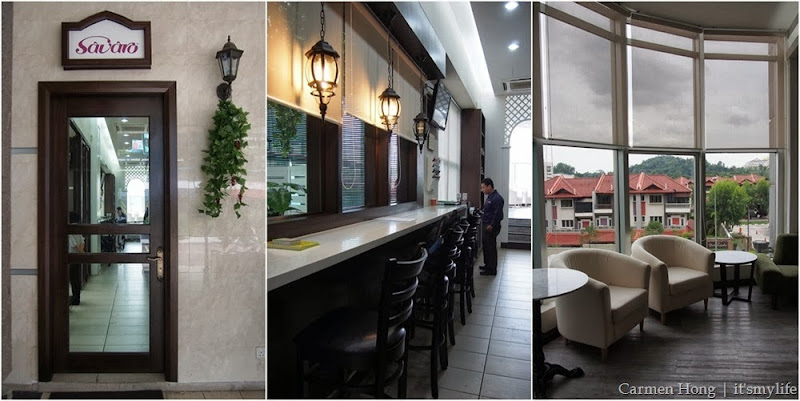 I have also fallen in love with the gorgeous private room in Savaro, with glass all over and a gorgeous view of the Solaris Dutamas neighbourhood. If I ever wanted to organize a private function, I would do it here. This beats C.A.F.F.E.I.N.E.E.S’s private room, with the almost similar English colonial setting. I was informed that there won’t be any charge for the usage of the room, and it’s available for function (approximately 2 hours).