Nestled within the grounds of Grand Millennium Hotel is a newly opened Japanese fine dining restaurant called Takumi. Takumi is rather fresh in the fine dining scene, having just opened a couple of months earlier. A brief look into Takumi’s Facebook, and you can see from the short description that Takumi offers the ultimate Japanese gastronomic experience. Seeing that this would be my first proper fine dining experience, I had my expectation higher than my usual, already high expectation of the place.
* * * * * * * * * * 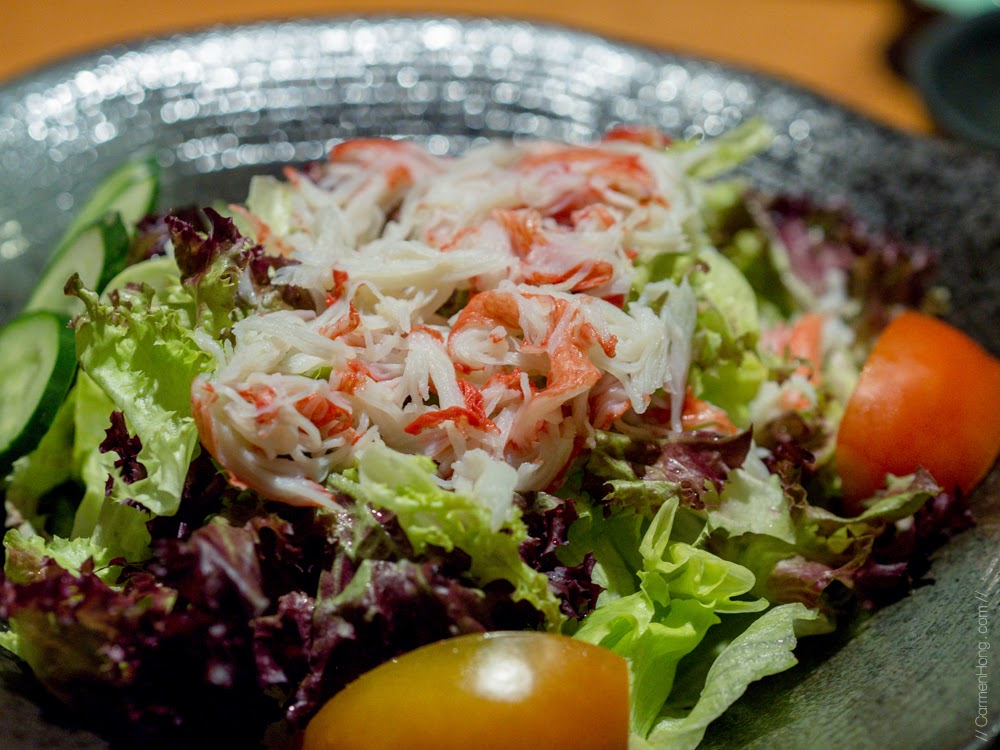 Kani Salad | RM18 (small) RM28 (large)
We started things off with Kani Salad which is a crab salad served with a tangy sesame sauce. On first look, the crab meat looks somewhat similar to those shredded filament crabsticks. Don’t be fooled because it’s pure Taraba crab meat which have been air flown from Hokkaido, Japan. Super fresh crab meat, and I would love to eat it boiled just like that without the salad, I’ll be fine too. Haha. 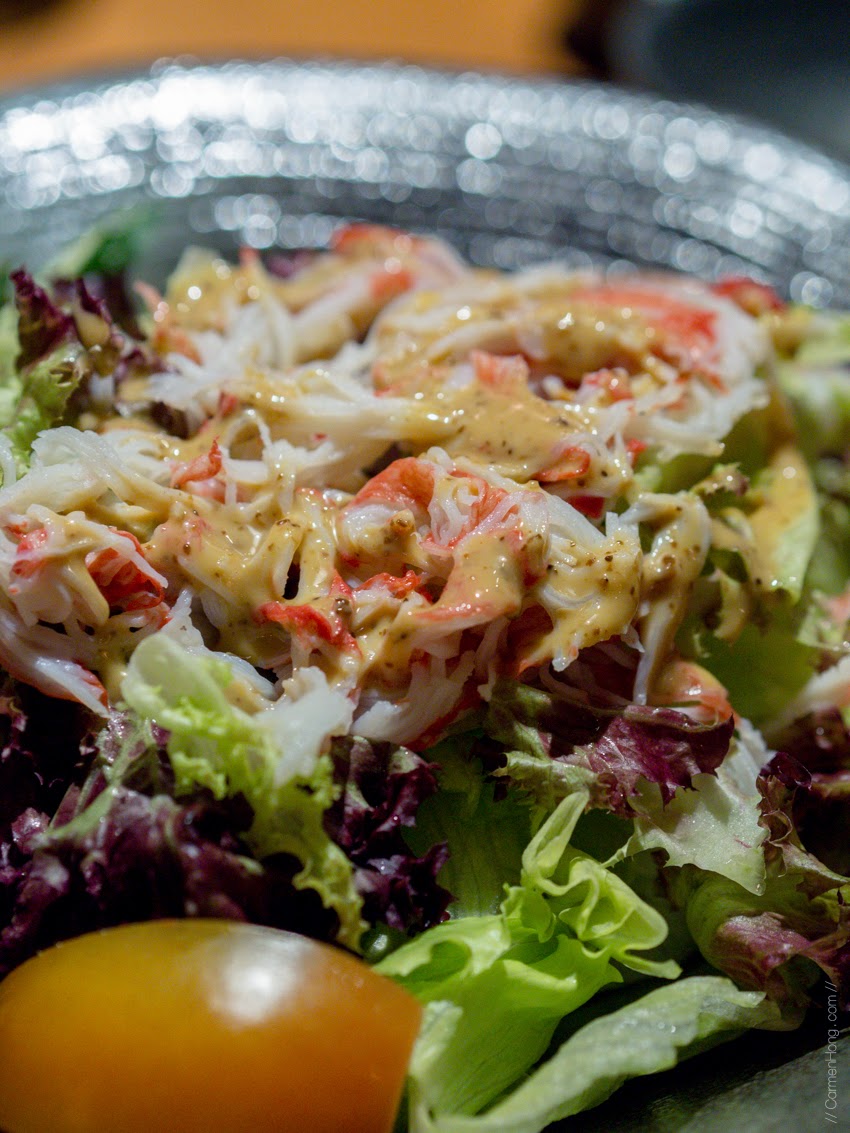 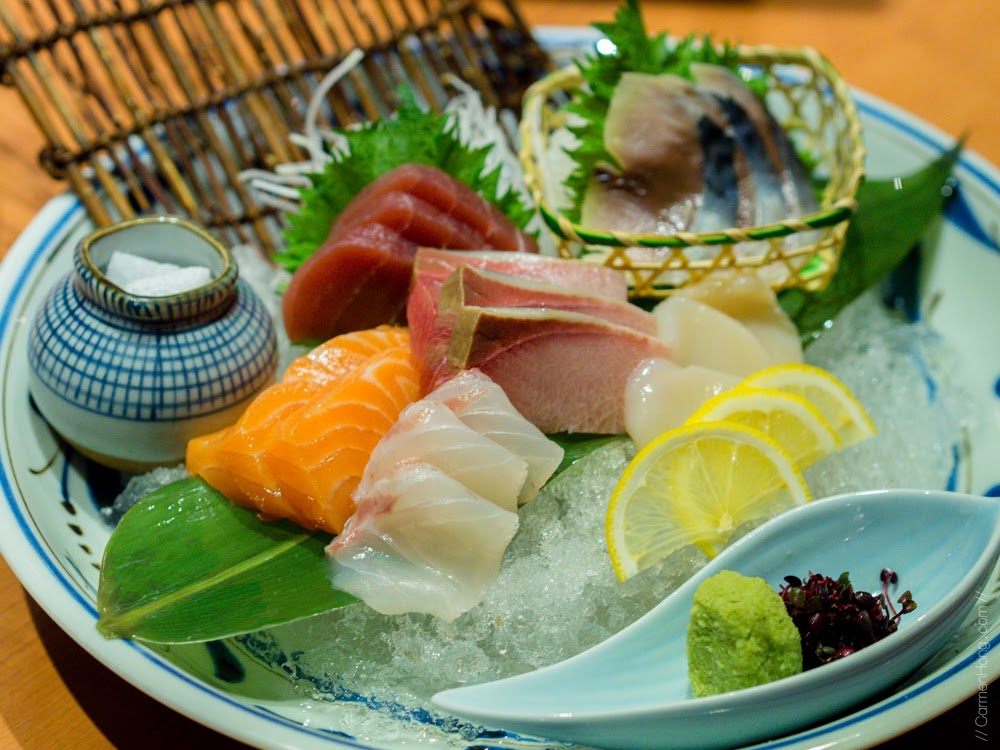 Sashimi Platter | RM180
Then, we were served with the exquisitely looking sashimi platter, complete with fog from the dry ice. It was a sight to behold, having it presented in such glorious manner. There were six different types of sashimi, Spanish mackerel, tuna, kanpachi, scallop, salmon and halibut. I loved how fresh the rest of the sashimi was; it was smooth, with just the right cut. One dip into my wasabi soy sauce, and next into my mouth …… it was just #foodgasm! I swear it was that because there is no other feeling quite like that.
My favourite of the lot would be the Spanish mackerel, I never knew that it could be served as sashimi. It was really great, because it didn’t taste anything like the usual sashimi. It was extremely thinly sliced, and mhmm I cannot find words in my vocabulary to even describe it. 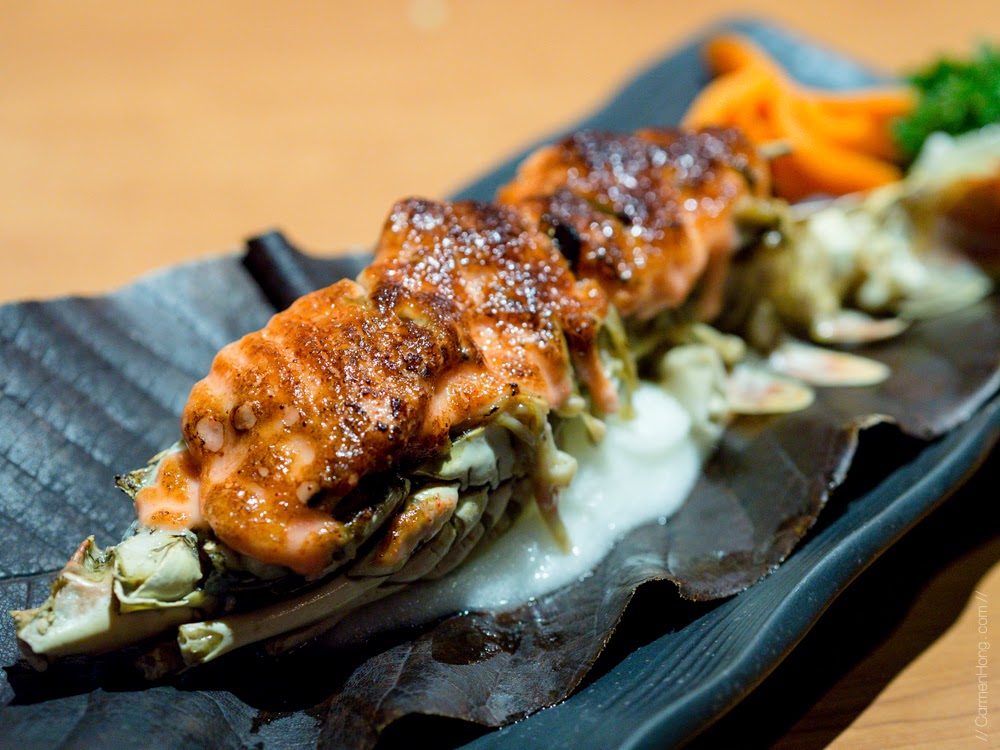 Lobster Mentaiyaki (half) | RM78
This arrived next, and for a moment I thought it was a really huge gigantic prawn. Well, it is actually half of a Boston lobster cooked with cheesy Mentaiko sauce with enoki and shitake mushrooms! I will marry the chef who came up with this dish because it was just delicious and really, it was the best combination of my favourite foods ever. It is served on a bed of salt, because the Japanese is superstitious like that. It is purely part of the decoration and not to be eaten at all. 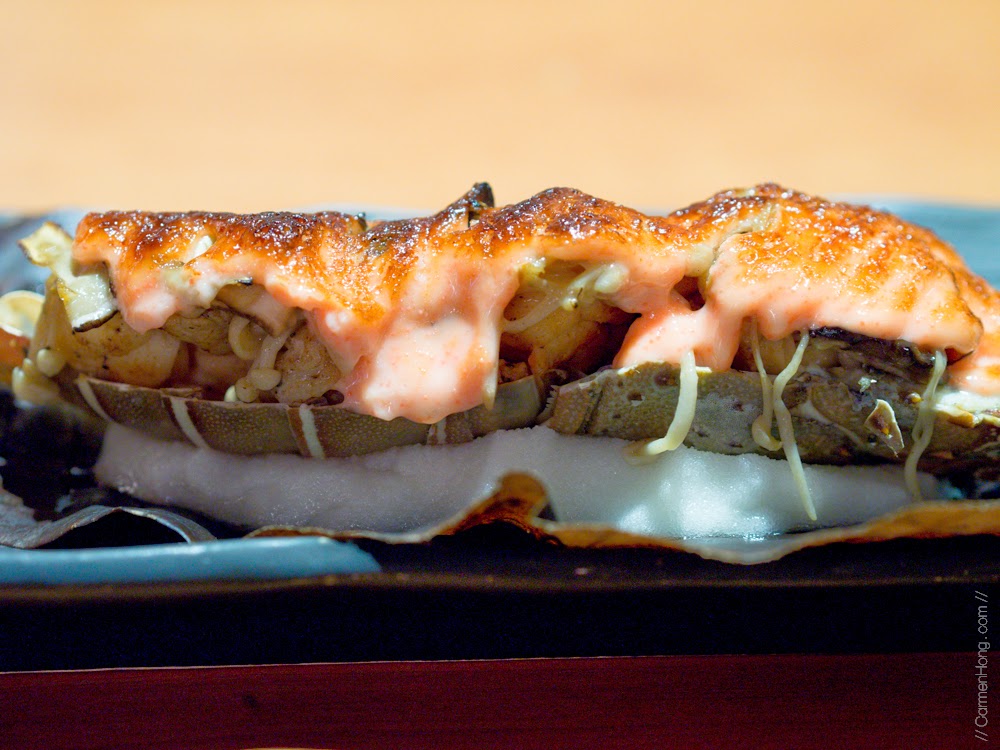 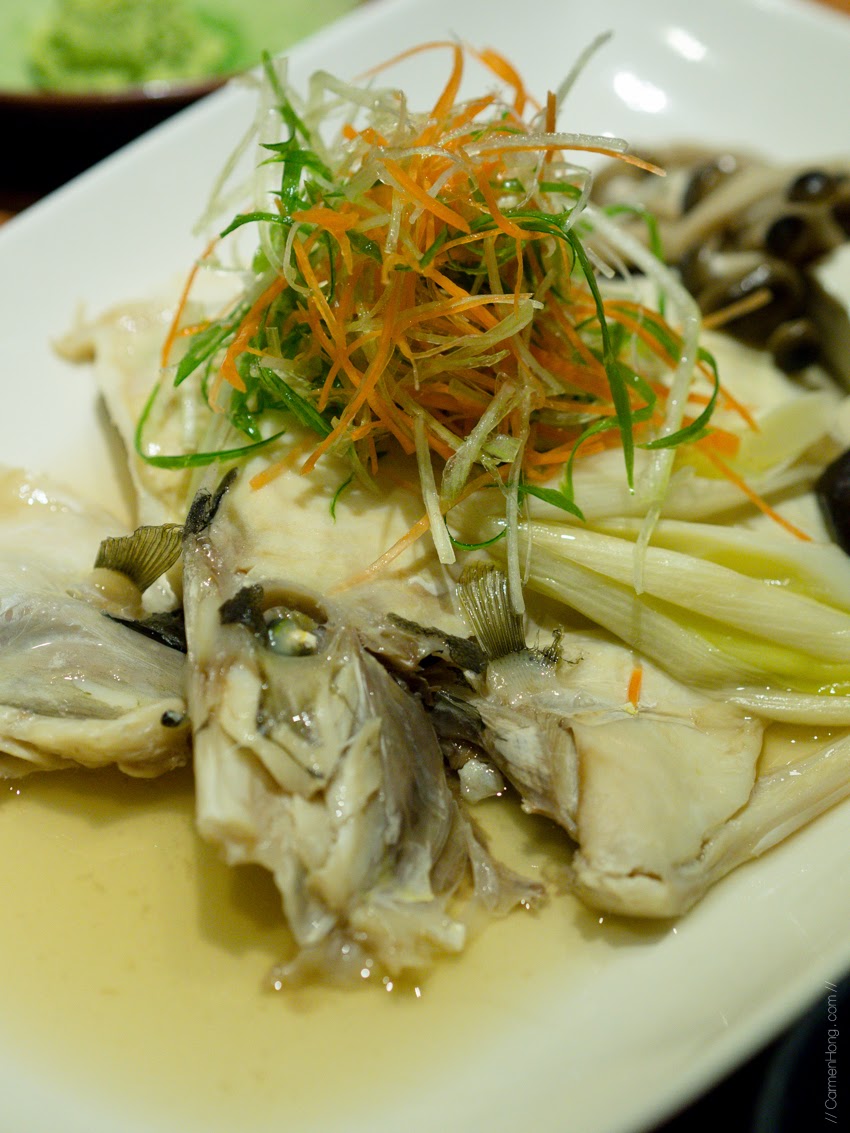 Kawahagi fish | Seasonal price
Then, we had the steamed kawahagi fish which was for me just steamed fish. It had an odd bitter aftertaste, something tells me that you’ll need an acquired taste for this fish. The manager of the restaurant, Johnnie mentioned that this kawahagi fish was more famously eaten as sashimi dipped in the same fish’s liver sauce. Just from his description of the sashimi, I have already made that a must try delicacy when I’m in Japan. Or if it is ever available in Malaysia/Kuala Lumpur. 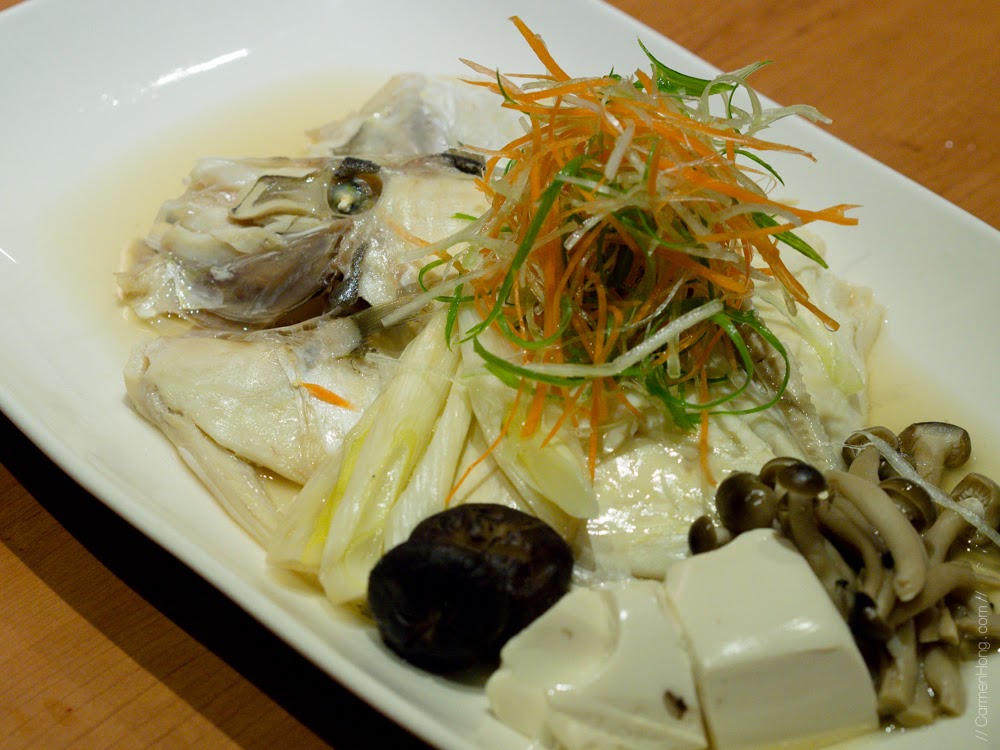 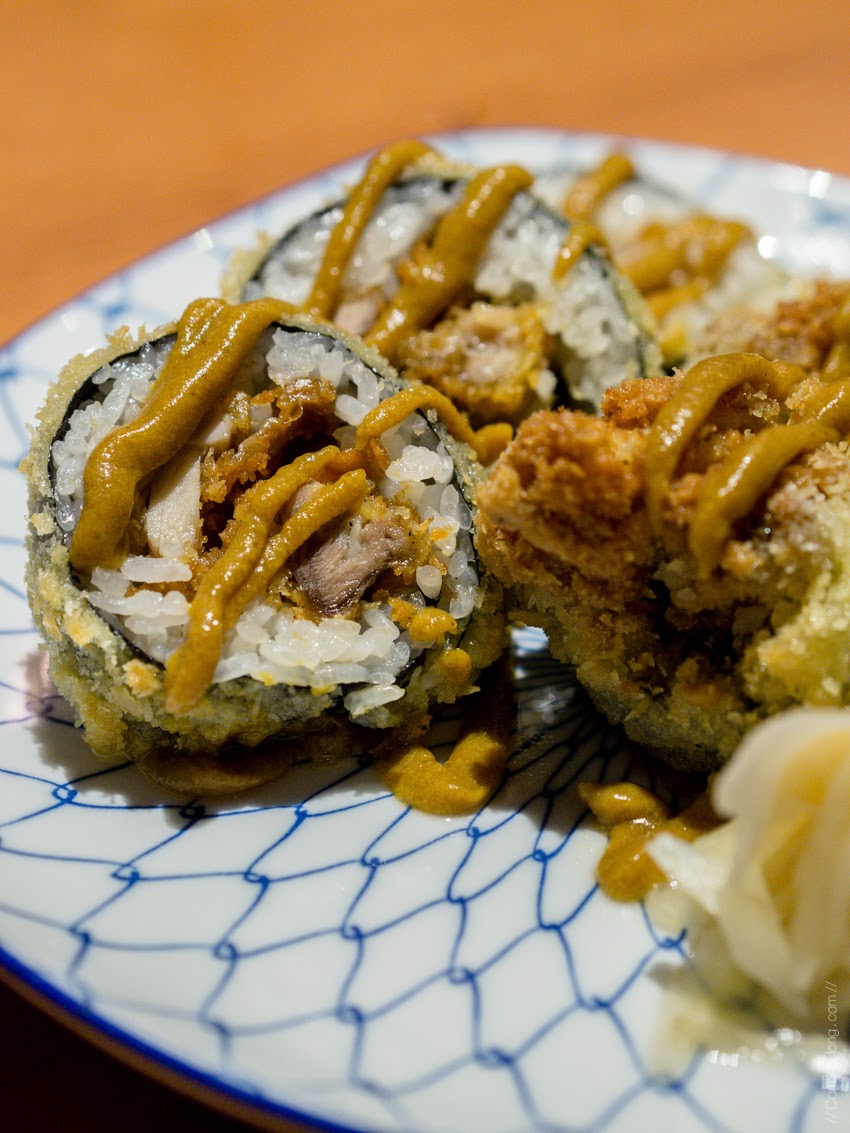 Chicken Curry Cutlet Maki | RM30
I have never been a fan of sushi or maki alike, because of the rice. Not to say I don’t enjoy it but it really depends because when I crave for it, I can eat loads. This dish although is a type of maki, is actually cooked in a rather different way. They used fried chicken cutlet, and in fact the maki have been deep fried too resulting in a crispy ‘skin’ with soft fluffy rice on the inside, and also the crunchy chicken. The sauce gave it a mild hint of curry flavour, just nice and it goes well with the dish.
There’s a saying that goes, save the best for last. I couldn’t agree more because the last dish we were served was the Shabu Shabu. A pot of clear broth was brought on to the table, followed by a platter of neatly arranged vegetables and finally, two plates of sliced fresh meats. 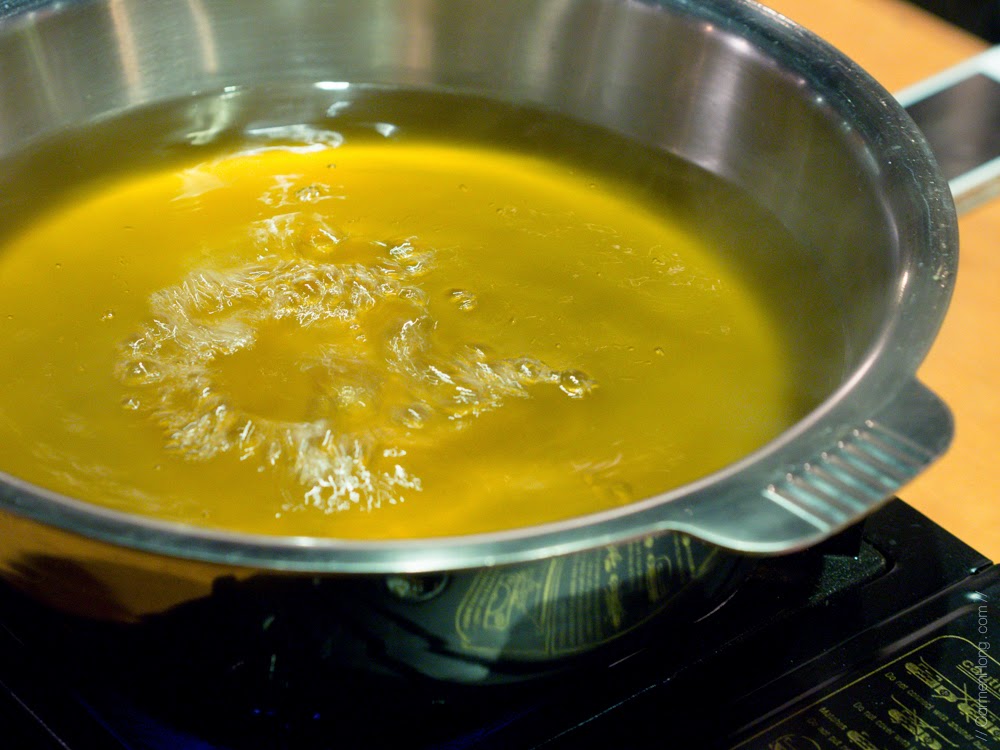 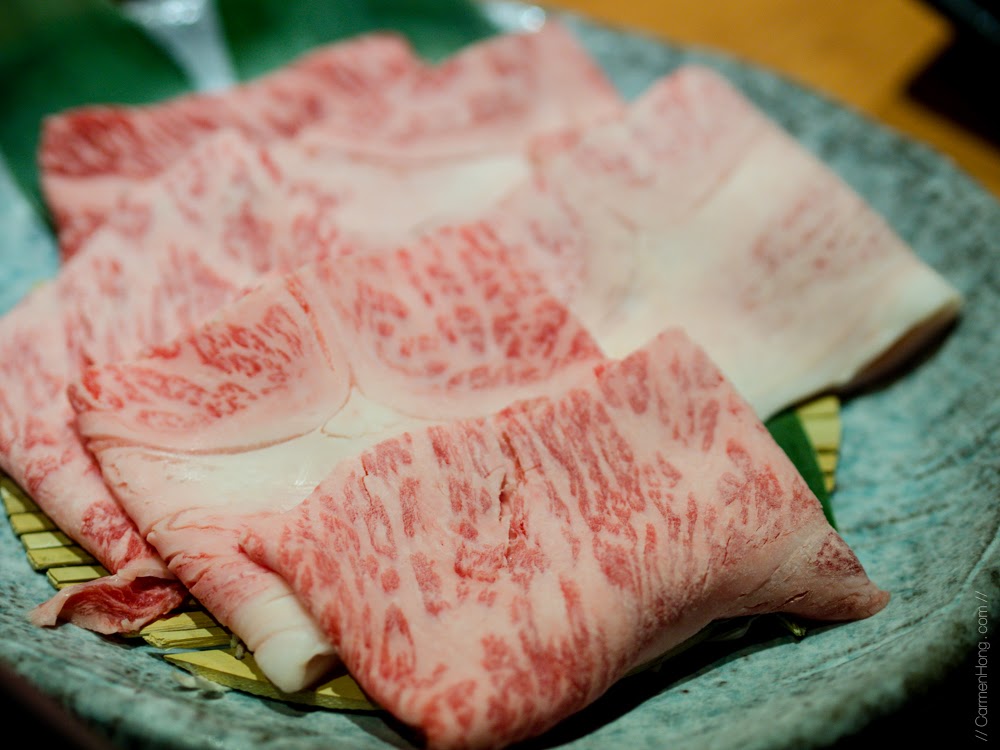 A5 Wagyu Sirloin Beef | RM280
I have only heard of the wagyu beef and just how delicious it was, but I never knew what made it so good. The secret was actually in the marbling of the beef; the better the grade of the beef, the more marbling the beef would have. These marbling are actually unsaturated fat, but trust me, you will never have eaten “fat” this good. The waiter mentioned that the best way to cook these wagyu beef in shabu shabu, was to cook it till it’s about 60-70% done. That way, the “fat” will be retained within the meat leaving it still juicy and soft chewy. If you overcooked it, all the “fat” would then turn into oil and it goes into the broth. Personally, I prefer to have it cooked at 70%, where part of the meat are still raw because you can taste how silky smooth the meat is in your mouth. This is just another #foodgasm again! 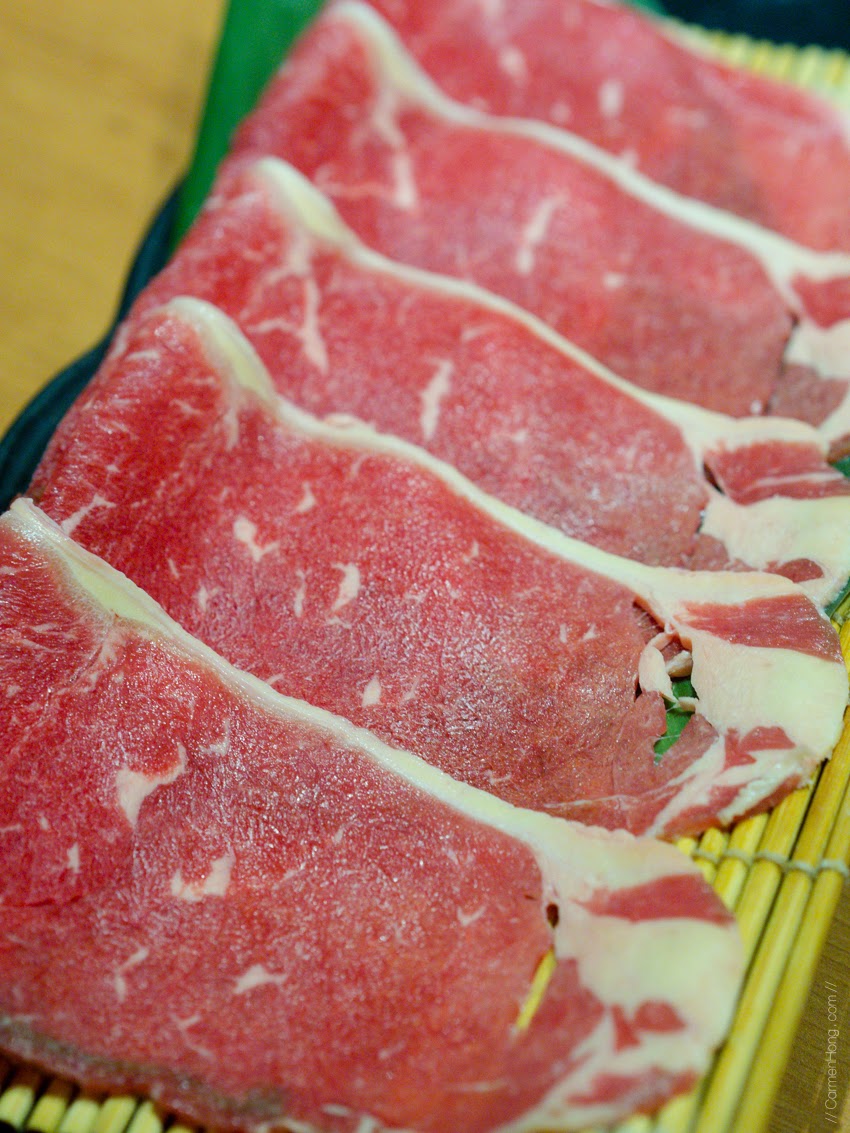 Angus Beef | RM88
We also had the Angus beef, which was really good as well. It was meant to serve as a comparison between the wagyu and the Angus, and yes the difference was quite noticeable. But the Angus was still great, but a different league from the wagyu, that’s for sure. 🙂 We ended our meal with a beautifully decorated fruits platter, which was made by one of their talented staff. They were almost, too cute to eat. 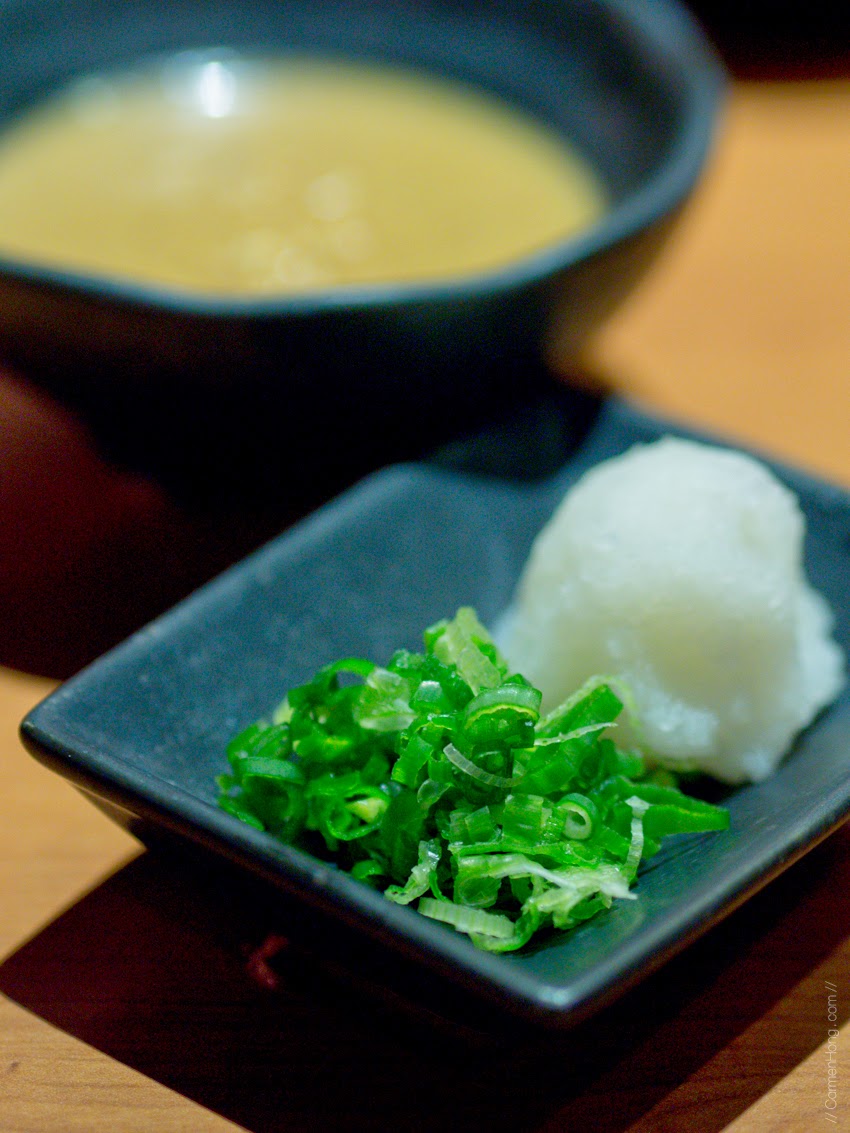 &. Thanks to HungryGoWhere Malaysia and Takumi Restaurant for having me. +
Share