When I watched The Hundred-Foot Journey, I fell in love with the intricate art of cooking and the appreciation of finer food (albeit this being secondary to the plot). Leaving the cinema, I wondered what it would be like to be served by such passionate chef, as so much goes on behind the kitchen that isn’t always shared, from the inspiration, inception and execution of dishes. After tasting Valentine’s Menu at Tanzini, Upper Deck, I am happy to tell you that I know I know exactly how that felt like. 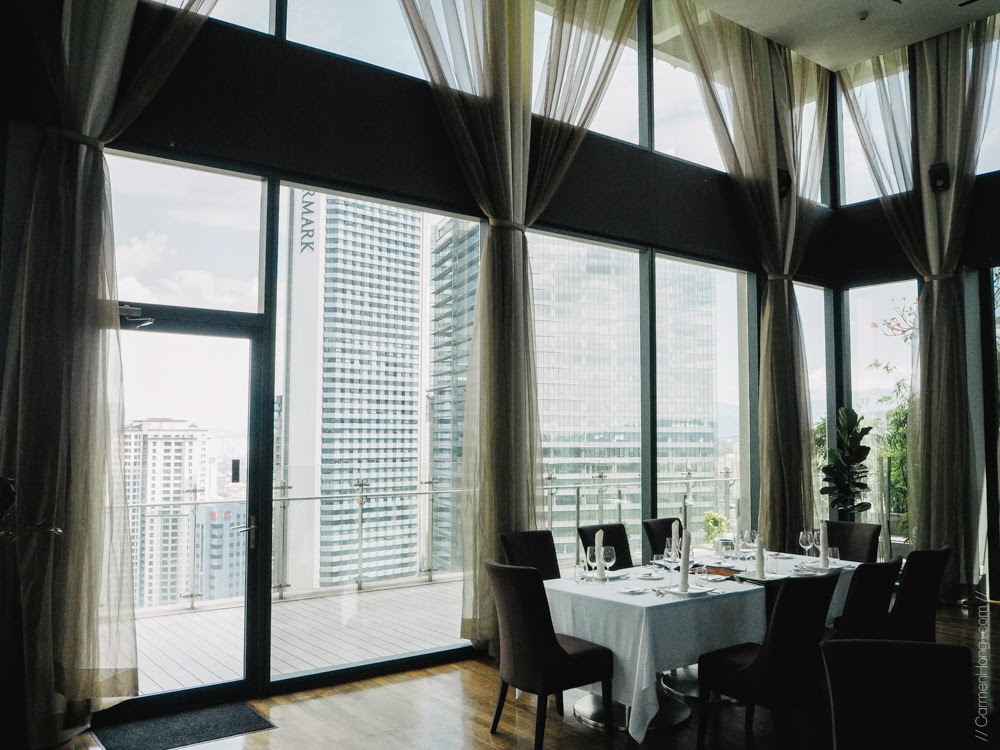 I first heard of Tanzini from the Malaysian International Gourmet Festival that I attended last year, so when I was invited along to review their Valentine’s Menu, I was pretty thrilled. When I arrived, I found out that there are actually two Valentine’s Menu, one for the Gentleman and another one for the Ladies, each with their own distinct appetizer, soup and starters. 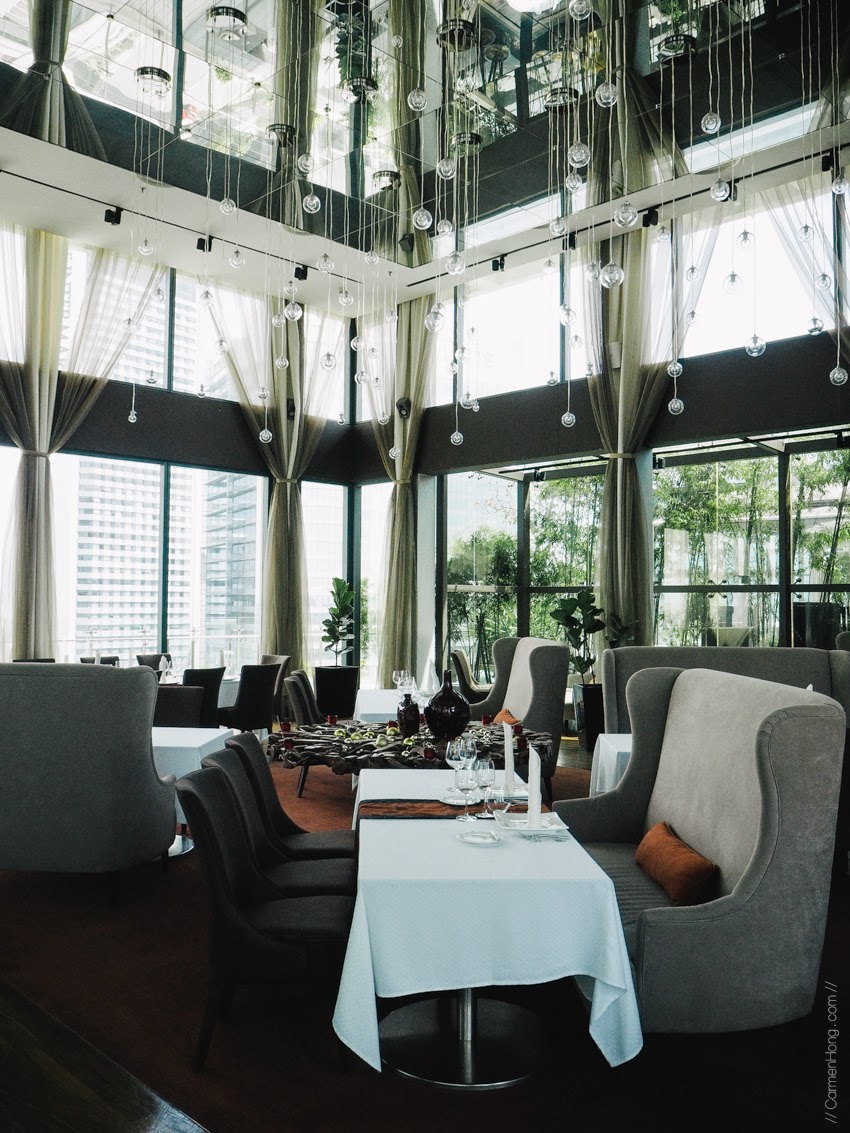 Before I go on, this Valentine’s Menu is the creation of Senior Sous Chef, Eugene Lee who took the time to explain why the menus were designed as such, along with the rationale behind every dish. As he explained, I couldn’t help but feel inspired with the sheer amount of thought that went into making this menu. Let me not bore you further, but show you what Valentine’s Menu has to offer.
* * * * * * * * * * 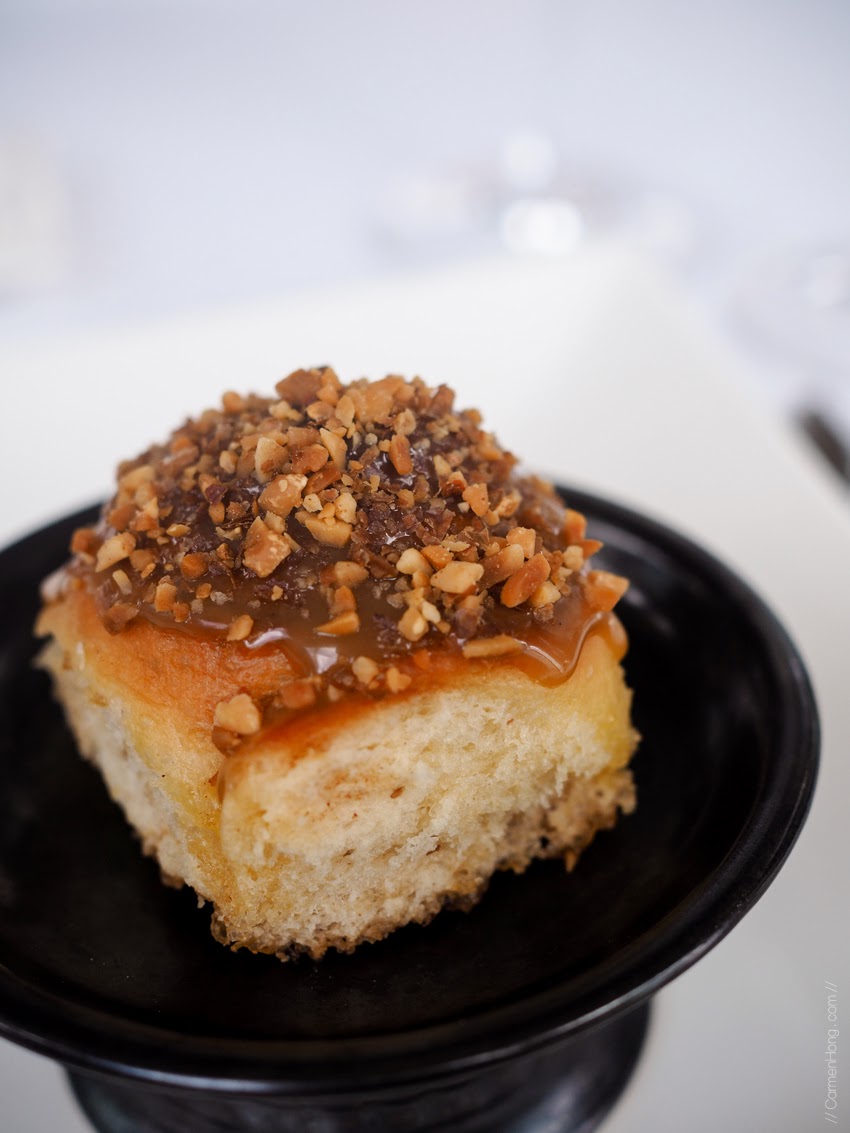 Baker’s Feature | Valentine’s Artisanal Specials
Kicking things off is a special Baker’s Feature,a showpiece from their in-house bakery. We were served with the Caramel Peanut Cinnamon Roll, soft and fluffy, yet richly infused with cinnamon flavour and coated with caramel. Despite being overloaded with goodness, it wasn’t overwhelmingly sweet, the flavour being derived from their use of natural ingredients instead of table sugar. 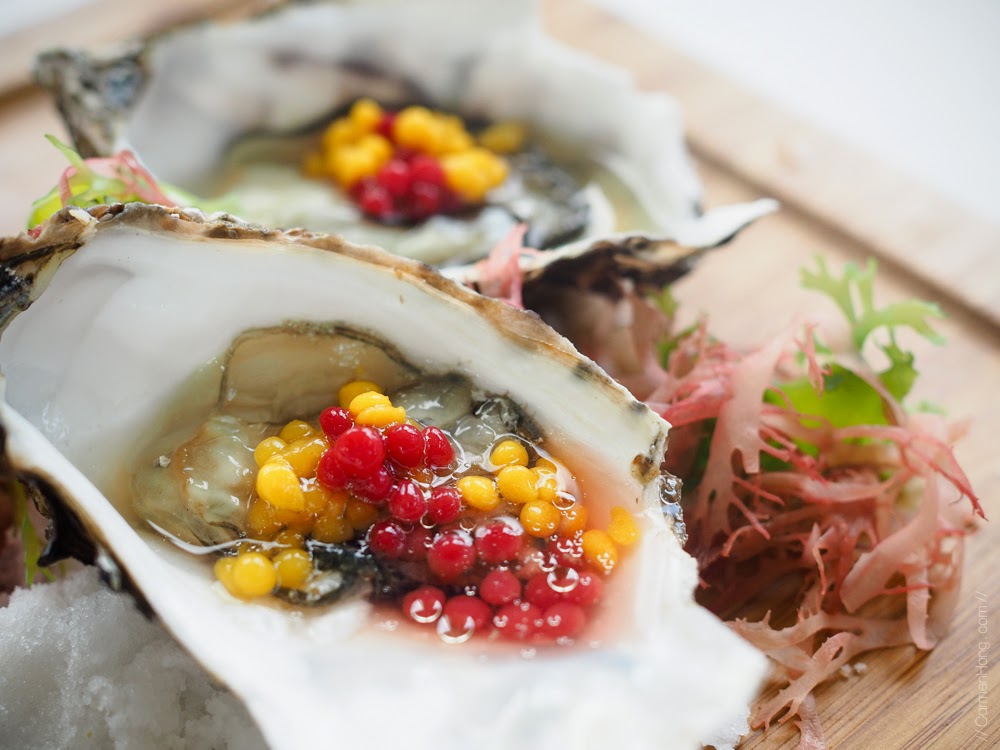 Amuse Bouche | Tsarskaya
Next, before the appetizer, Chef Eugene served an amuse-bouche, which usually helps to prepare the guest for the meal and to give an idea of the chef’s direction for the meal. For the Valentine Menu, Tsarskaya oysters, a type of Pacific oyster harvested in the sea waters of France were served.
These oysters are picked for their distant salt water taste, which is then coupled with Strawberry-Mango-Passion Fruit Pearls and served with Konbu Shoyu which is a soy sauce made naturally from seaweed. The oysters smelled strongly of salt water, but when consumed, the taste was instead subtler than anticipated, and the oyster had a firm and meaty texture. The fruit pearls were a rather unique twist to what would normally be a citrus based complement. 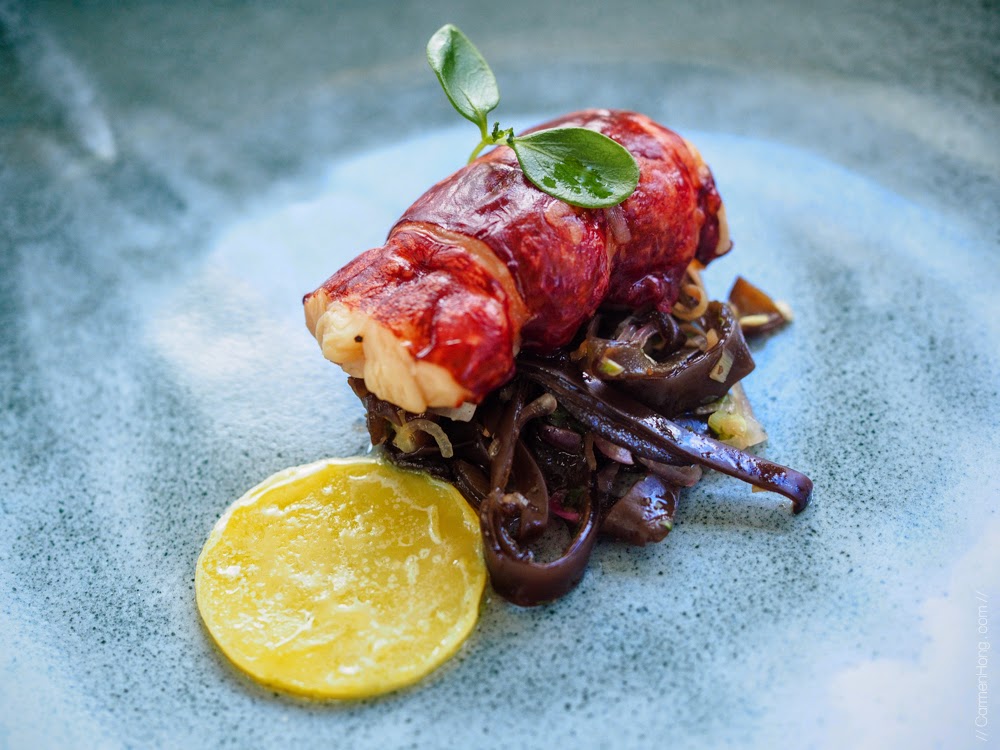 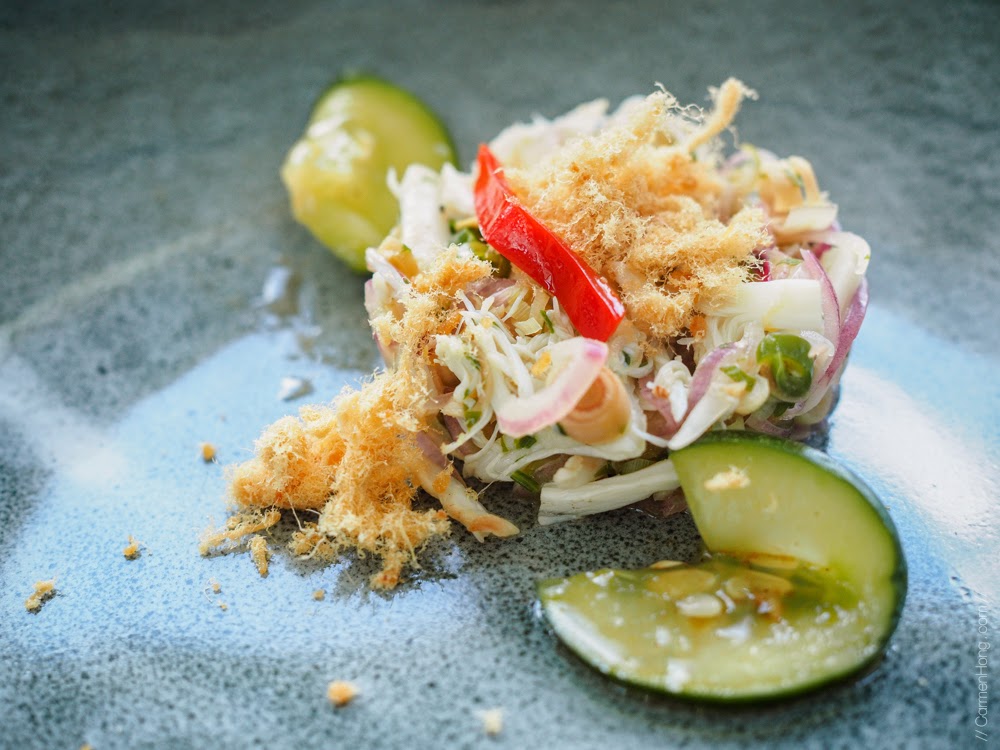 Appetizer (Ladies) | Stone Crab
And for the appetizers, the theme was Asian Kerabu in both menus. These appetizers were served with an intention of contrasting flavours and textures. In Britanny Blue, poached lobster was served with Asian Slaw and Yolk Carpaccio. The Asian Slaw is actually black fungus cooked in a kerabu style, its crispy texture contrasting against the chewy texture of the lobster. The Yolk Carpaccio, on the other hand is egg yolk cooked at an exact temperature to produce its final form (as pictured above).  For Stone Crab, the Stone Crab Ceviche was shredded, prepared kerabu style, then served together with Stone Crab Floss and Pickled Cucumber. 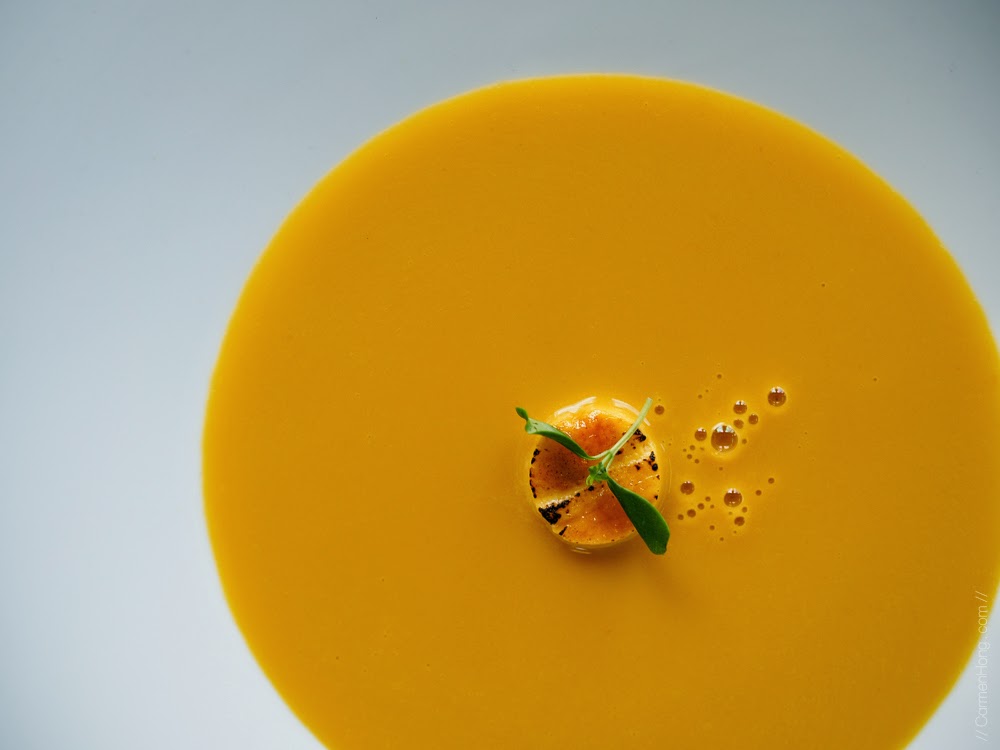 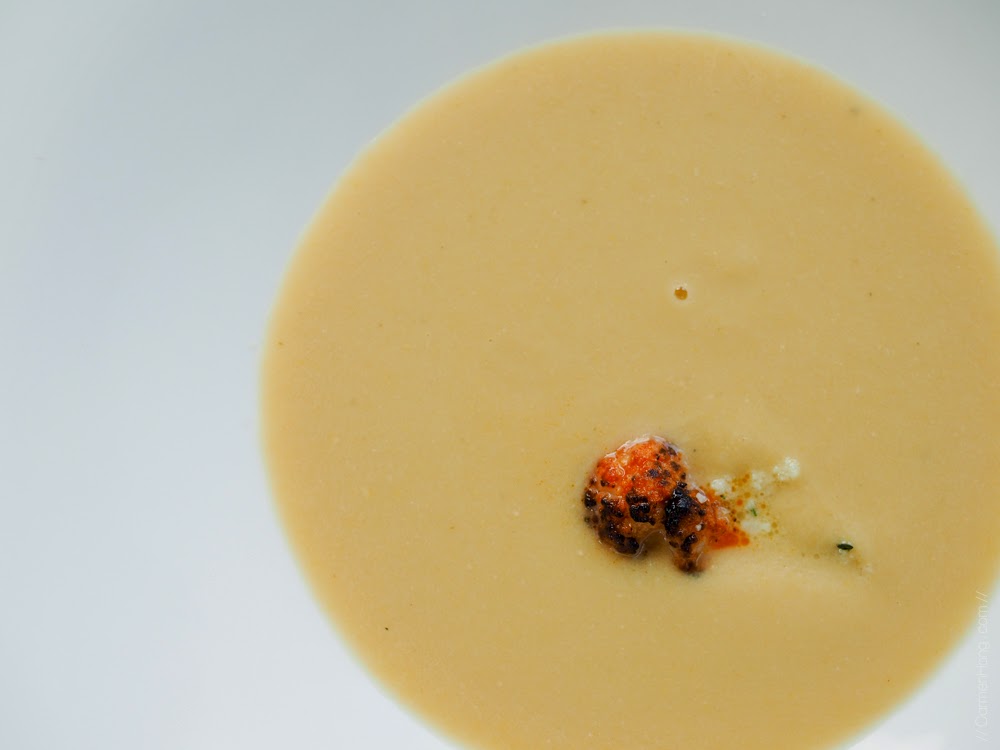 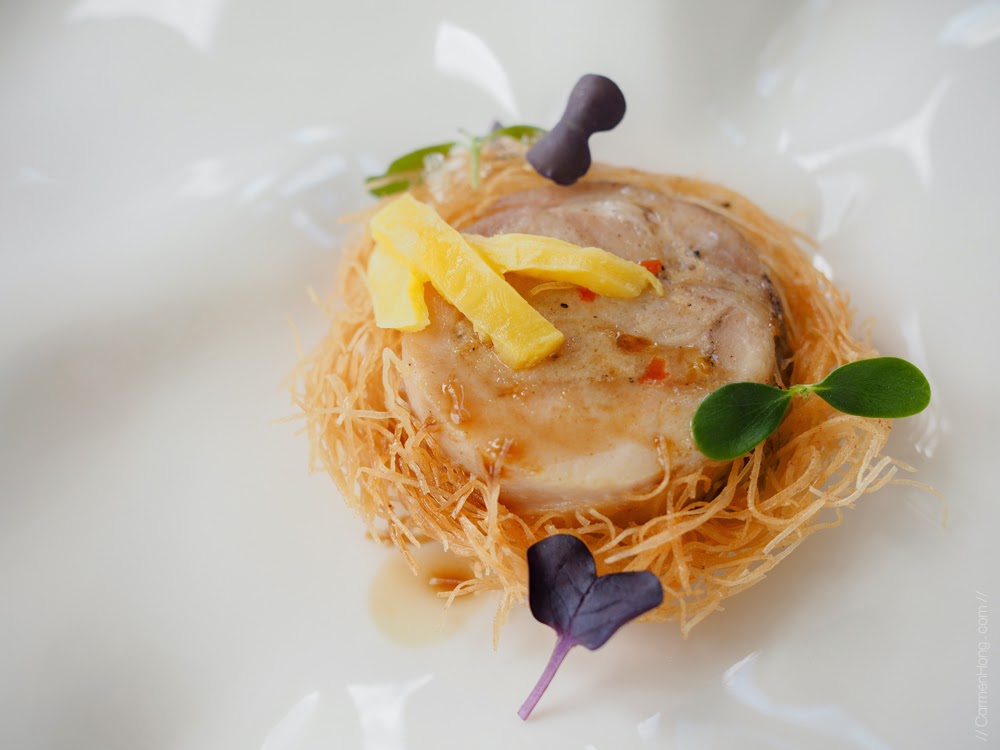 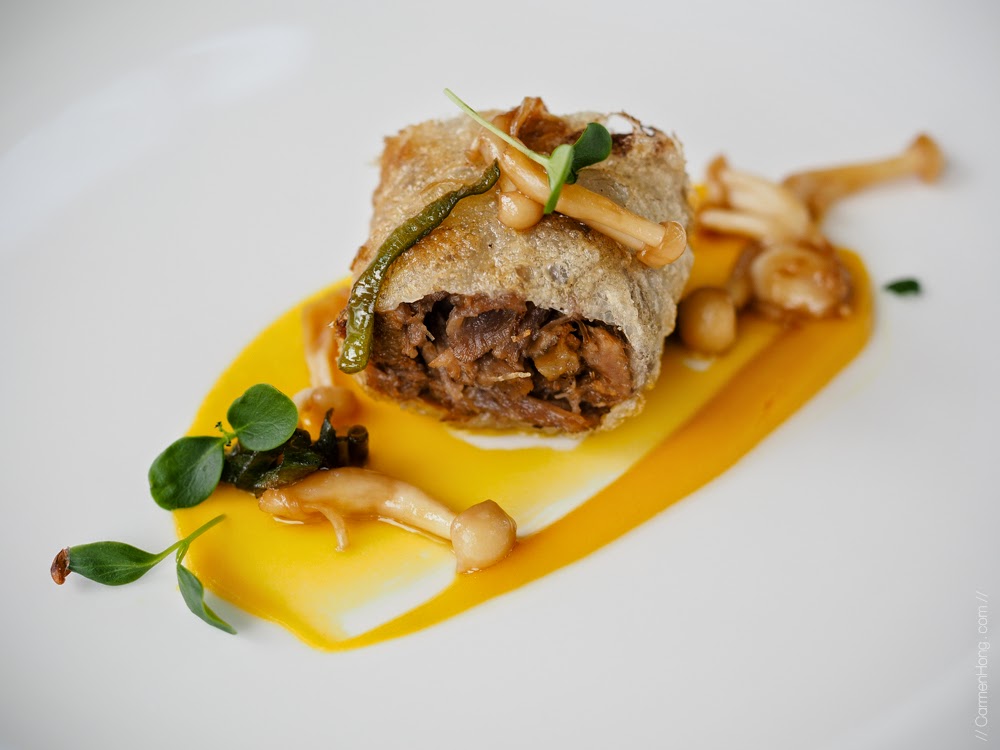 Starter (Gentleman) | Muscovy Duck “Spring Roll”
For the ladies, we had the Free Range Chicken “Pie”. Here, Chef Eugene created a deconstructed chicken pie by placing Roulade of Chicken & Chestnut on the Kataifi pastry crusts, which are then garnished with thin strips of Cured Egg Yolks . In fact, rather than looking like a pie, it really reminds me of a pretty little bird’s nest. The idea here was to create something that was beautiful to look at while tasting delicious too!
In Muscovy Duck “Spring Roll” for the gentleman, crispy Vietnamese rice paper was used to wrap a Muscovy Duck Confit. This was then served with sautéed Shimeji mushrooms and Shishito Japanese green chili, with Roasted Butternut Squash Puree glazed along the dish. The Muscovy duck was Chef Eugene’s choice because of its bigger size compared to others. This breed of duck is usually found overseas, but there is a local producer based in Ipoh who rears these ducks free-range making for leaner yet tender meat. 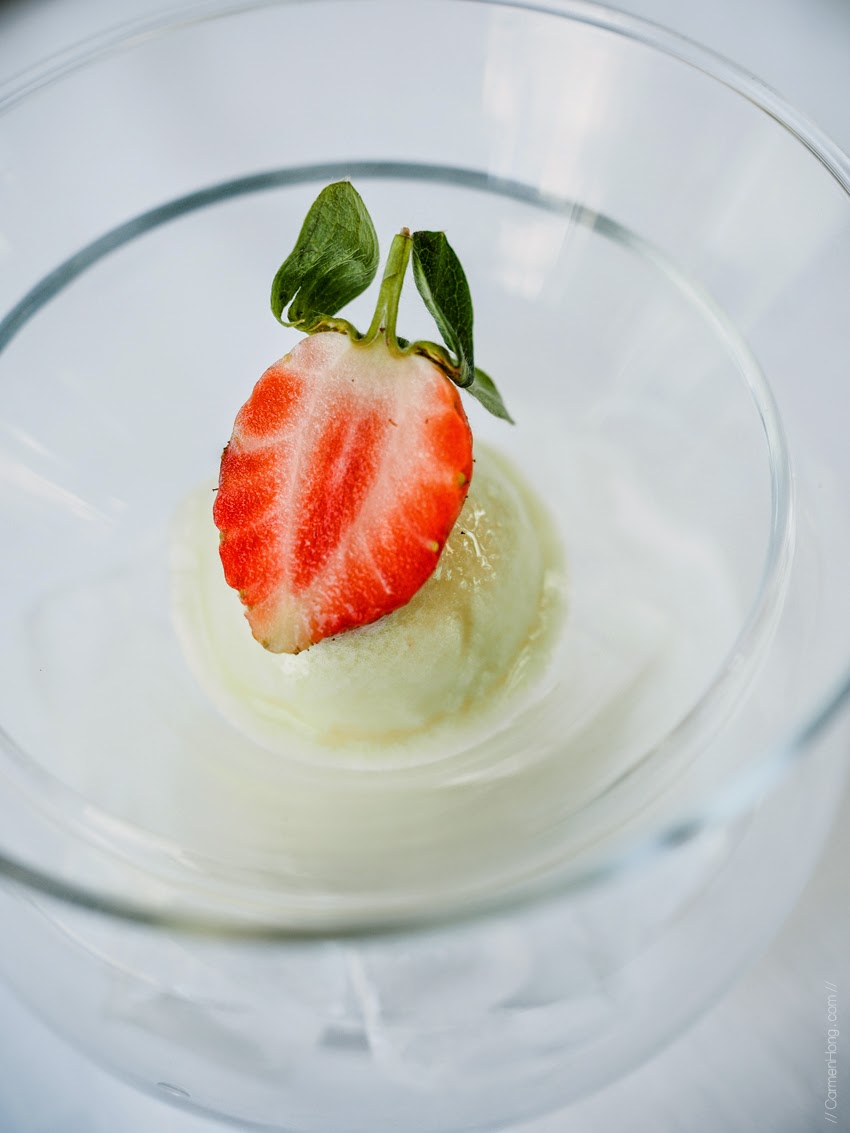 Intermezzo | Sorbet of the Day
Before heading on to the mains, we had the Sorbet of the Day to cleanse the palate, giving our taste buds a break from the array of intense flavours we had earlier on, preventing flavours from clashing and interfering with our subsequent apprecition of a the dishes to come. As luck would have it, our Sorbet of the Day was the green apple soy bean sorbet. This was an accidental creation by the kitchen crew due to a glut of soy beans. Boy, am I glad they concocted this because it has such a refreshing yet very unique flavour to it. There were hints of apple but there was this mild soy taste to it as well. 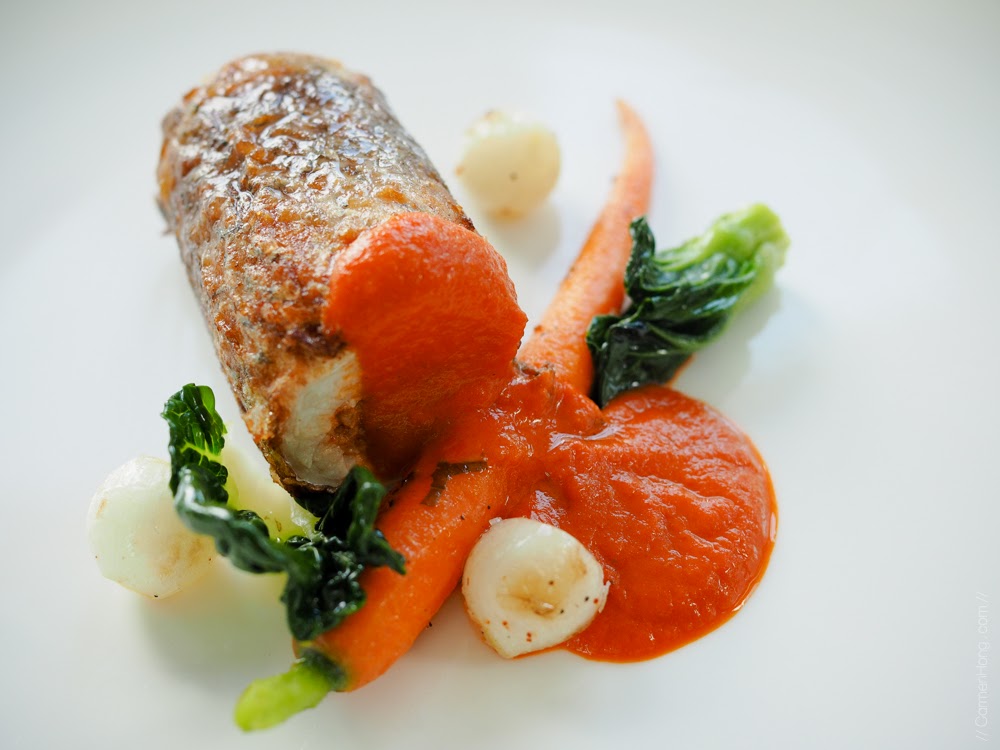 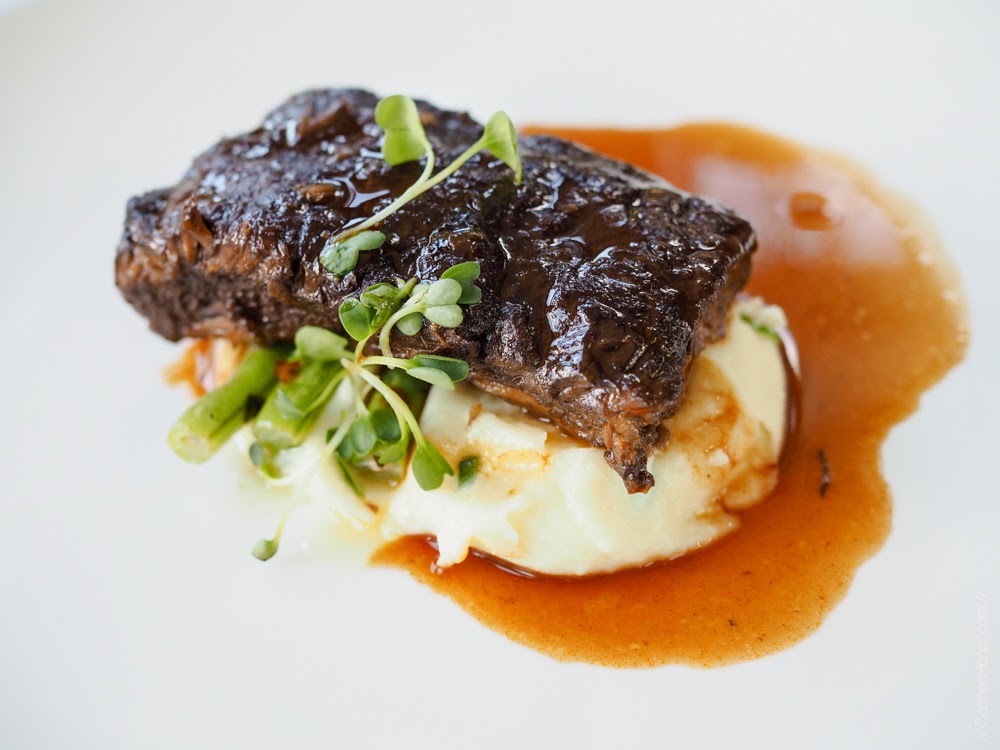 Mains Seduction | Wagyu Beef Ribs
For the mains, a choice of either having the Barramundi or Wagyu Beef Ribs was presented. The Barramundi dish isn’t just a plain fish steak. It is actually Seared Barramundi stuffed with Otak-Otak, in the classic baba nyonya style. This was inspired from the Chef’s roots as he comes from a Peranakan background. Using only the freshest fish straight out from the aquaculture farms, the normally bland tasting barramundi is brought to life as the spice and heat of the Otak-Otak brings out the sweetess in the flesh of the fish.
The Wagyu Beef Ribs, on the other hand is Tanzini’s signature Slow Brasied Wagyu Beef Ribs Goulash Style. The braised beef was hearty and very flavourful, which was no surprise since it was marinated for approximately 72 hours. I do enjoy my meat tender yet chewy, and this was prepared to perfection. Every bite was heavenly, with the taste of the goulash stew (made up of cumin, tomato paste, paprika.. just to name a few of the ingredients) enveloping my palate. Served with Spring Onion Mash and French Beans, this combination pairs amazingly well with the goulash stew. 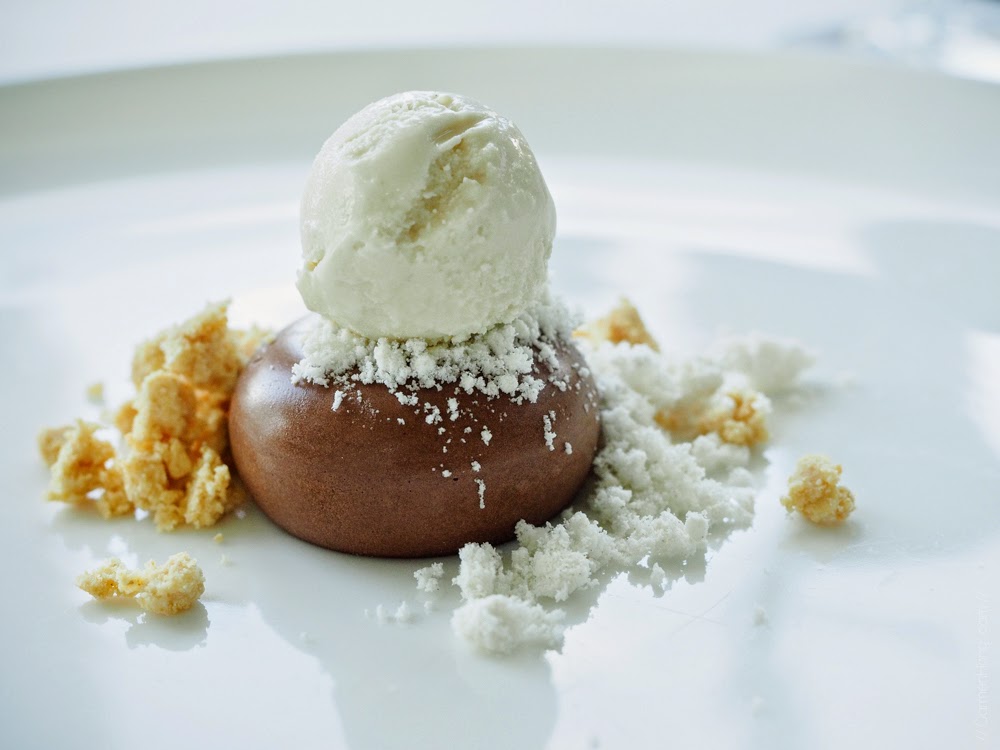 Sweet Ending | Chocolate & Butter
Dessert is of course the finale to the meal, innocuously called Chocolate & Butter. Of course, nothing is ever that simple as it is an elaborate four element affair; the brown butter ice cream, the chocolate mousse, the brown milk solids and also, the brown butter powder. As the Chef Eugene explained more about the dessert, I was rather impressed with the amount of thought which went into making this dessert. Fun fact! The brown milk solids were toasted till it turned to a powder with the intention of drying out the tongue, enabling one to fully taste the ice cream.
* * * * * * * * * * 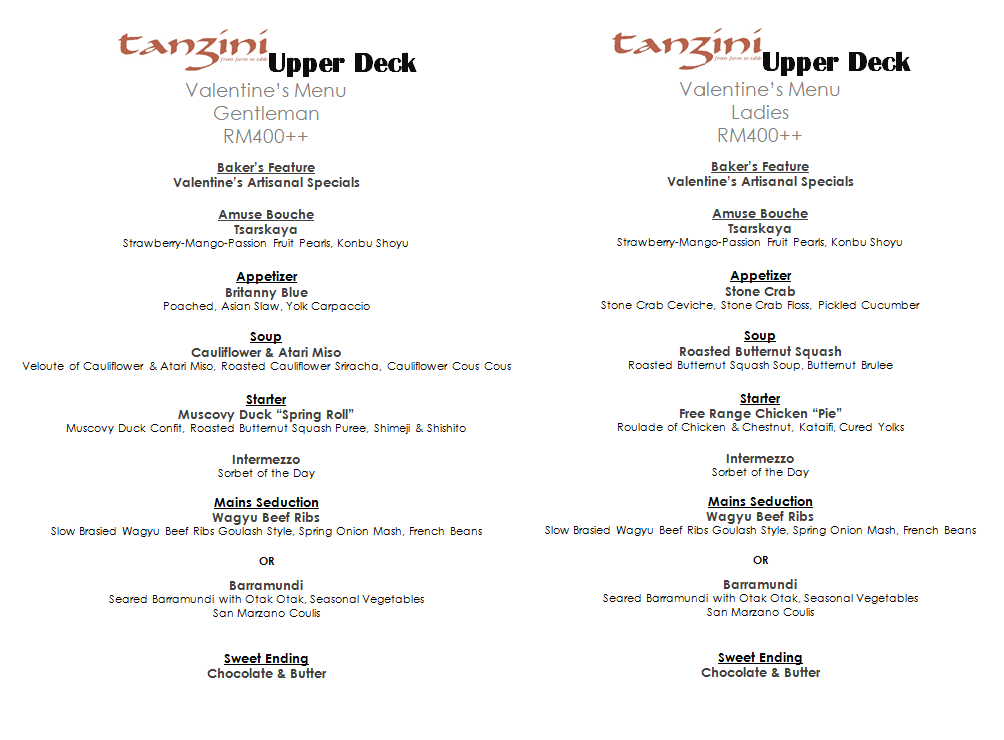 Here is both of the menu placed right beside one another, so you can see the difference and the complete list of the dishes in this one-of-a-kind Valentine’s Menu. If you read every word in this post above, you’ll know just how much thought went into creating this menu.
Personally I always believe you don’t need one special day to show love to your significant other, but it would be nice to splurge once a year for an unforgettable Valentine’s dinner a midst the gorgeous Kuala Lumpur’s skies. The individual menu is each priced at RM400++, and it comes with a welcome drink for the lady and gentleman, respectively. 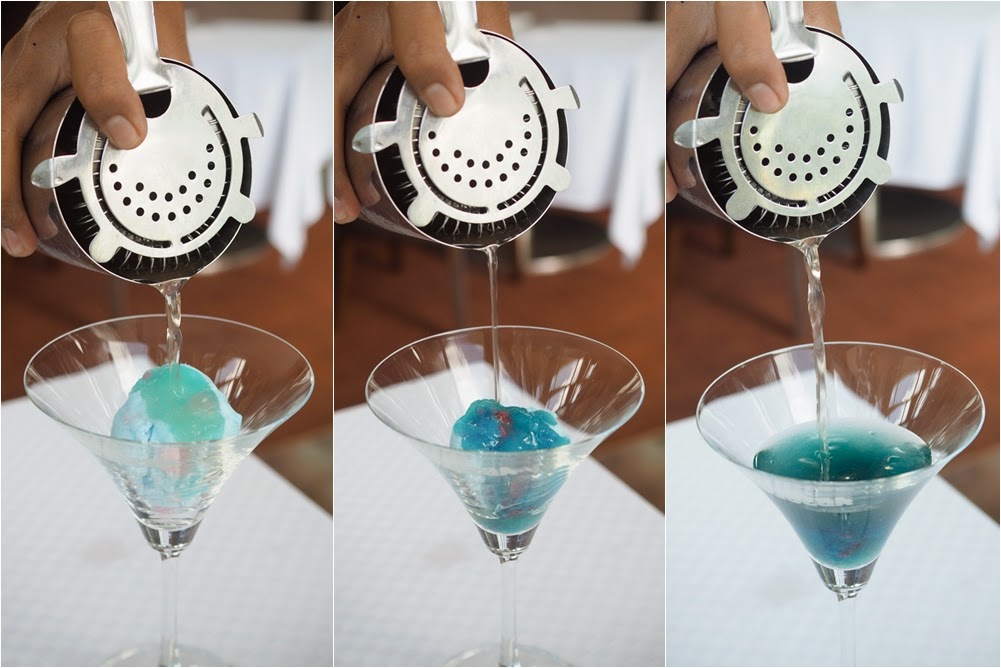 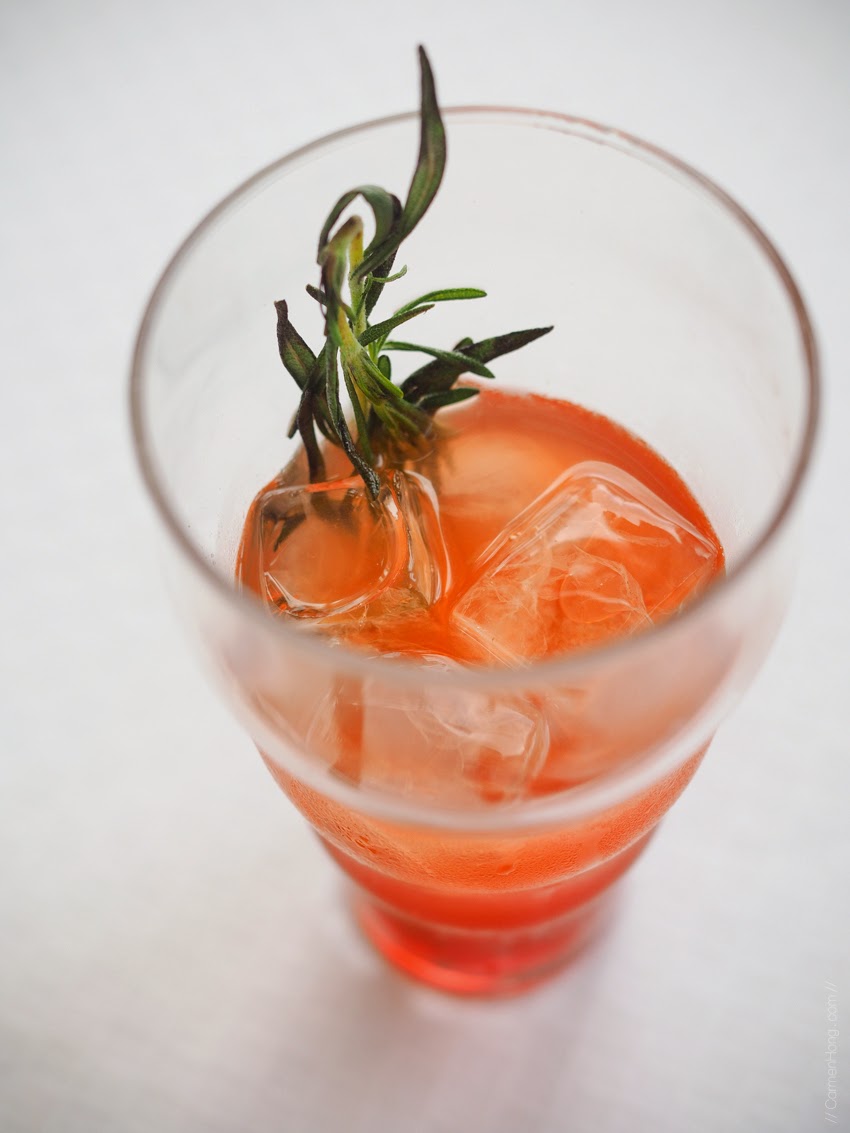 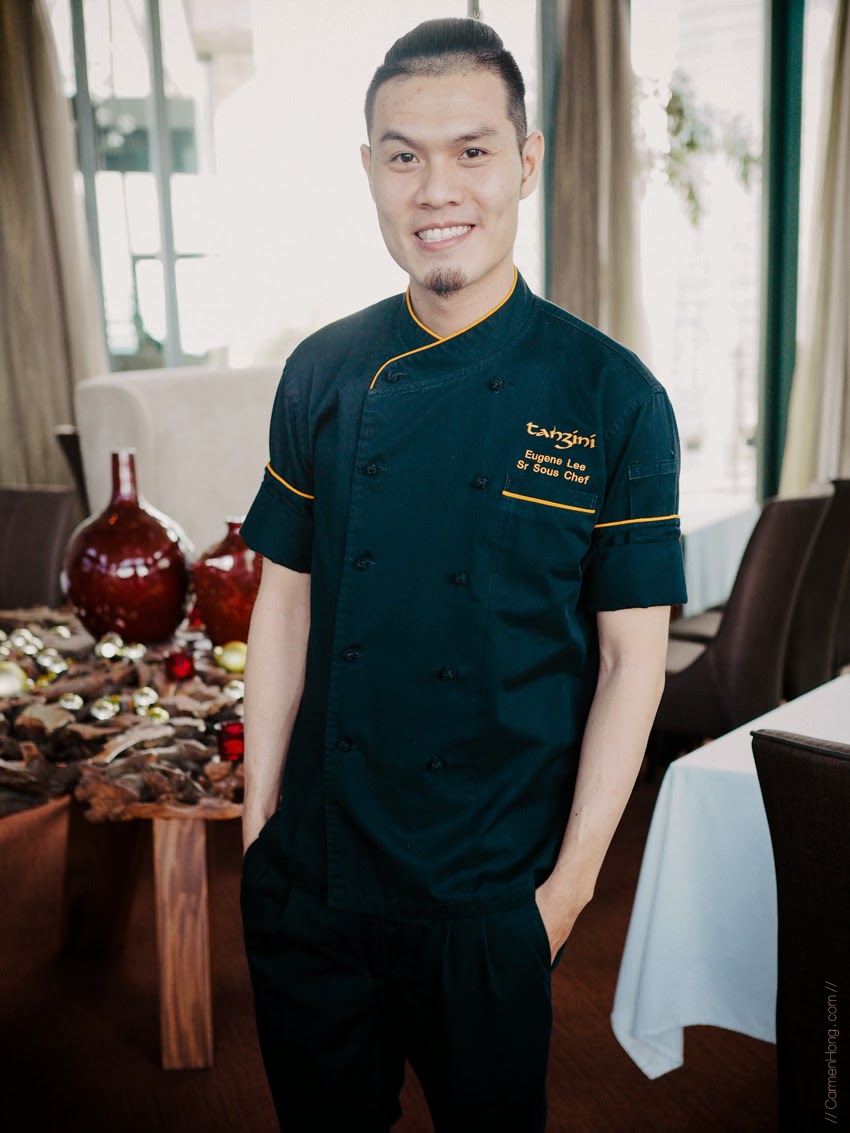 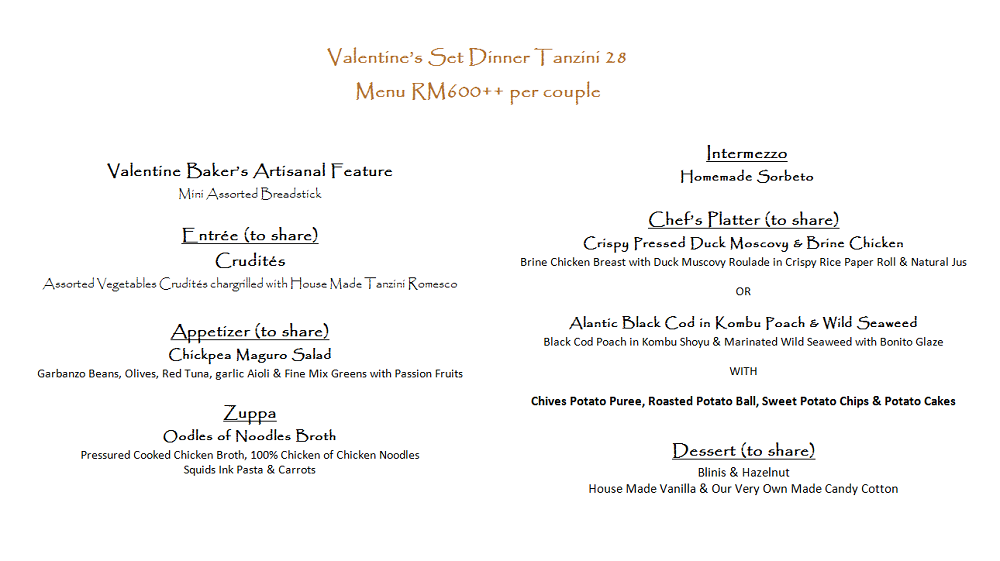 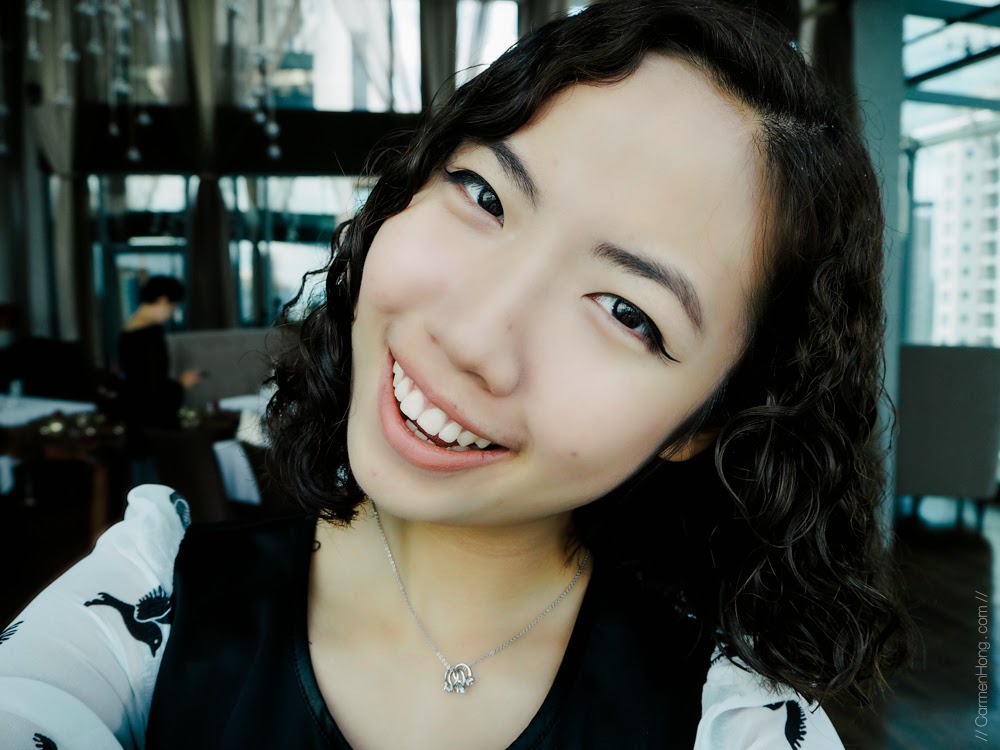 Thank you Tanzini for having me and Issac for extending the invitation to me. I hope you enjoyed reading this post (and figured out where to celebrate!). Do have a blasting February 14. 🙂
Till next time,
xoxo
Share