Gee, time flies. You would have probably heard me say that a couple of times, or more. I mean really, Raya is coming again! How is that not time flying by again? I remember how I didn’t eat much during the last Ramadhan but I did feast quite a bit for Hari Raya. And I know Ramadhan is already coming to an end, but here is my post on one of the Ramadhan buffet that I went to, (which I actually left sitting in my drafts and I forgot to post it up). T.T 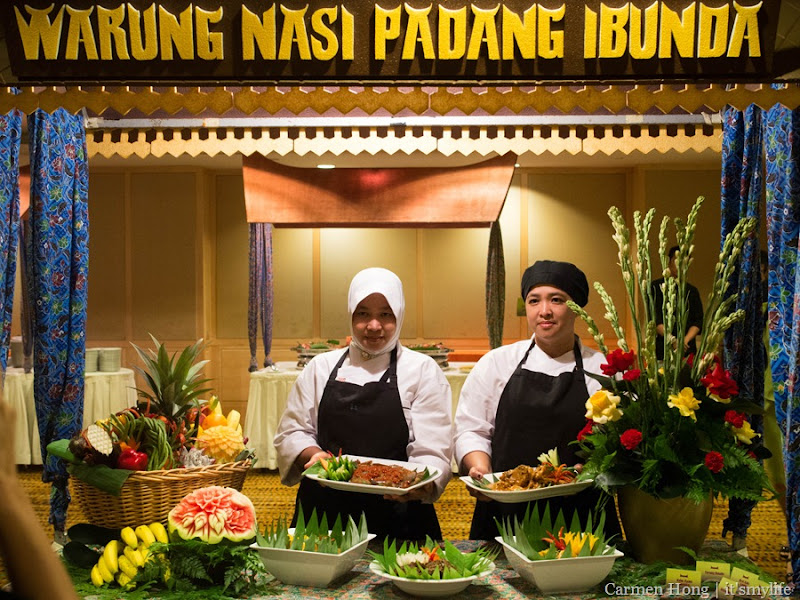 Presentation of the specialty Padang dishes | Scroll down for close-up pictures.

Okay, so here’s a little background on the theme; besides the usual buffet food spread, the highlight of it this time are Padang dishes which are cooked by chef Dewi using her mother’s recipes. She is from Padang, Indonesia so the food served is as authentic as a home cooked Padang dishes. 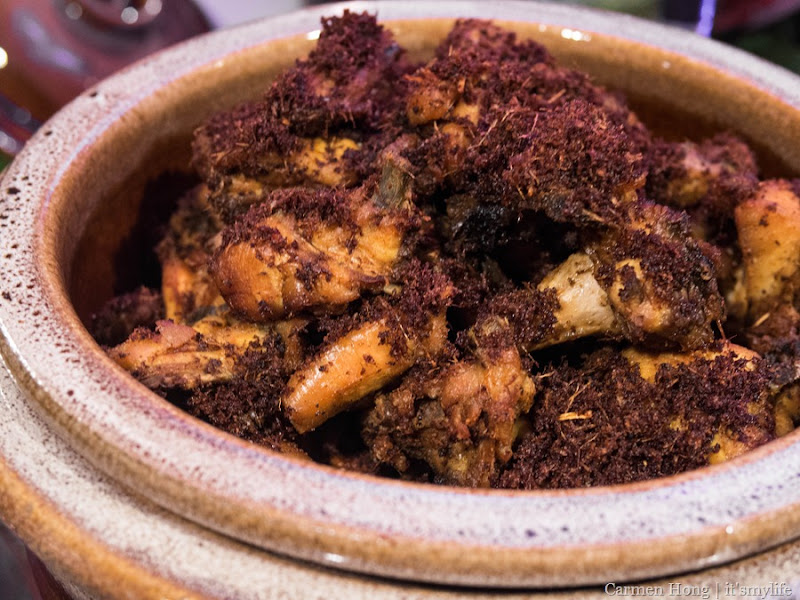 This dish is probably one that most Malaysians know and would have eaten it before. I’m actually a really huge fan of Ayam Goreng Berempah. It’s like I have a weak spot for these amazing fried chicken, especially when it is very well marinated with spices. So far, I have yet to come across a really good one. So, how does this dish fare? Honestly, it was just pretty normal. Nothing fantastic, it actually just tasted like normal fried chicken. I have expected more, since it’s supposed to be more authentic. 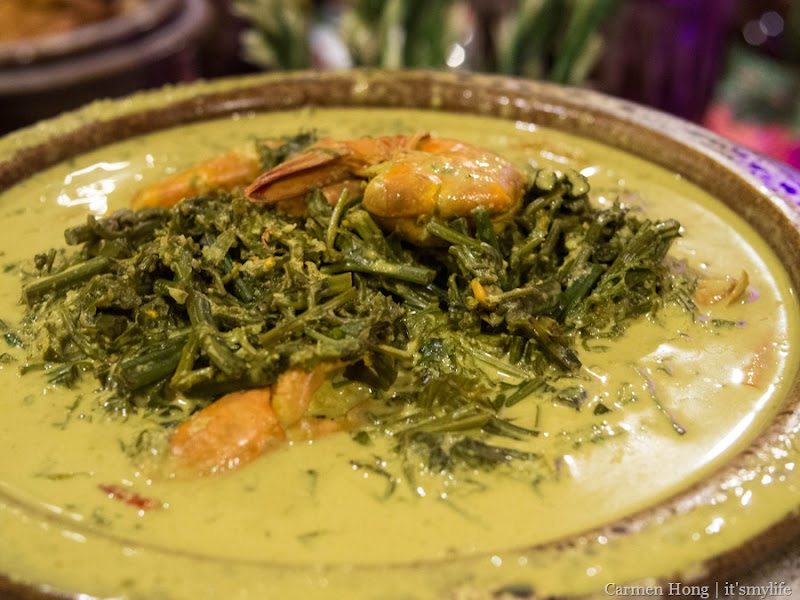 I have never been a huge fan of anything that is ‘gulai’. For a start, I have no idea how ‘gulai’ is made. I would usually prefer to know how a dish is prepared before I eat it. But being a foodie I am, I gave this a try and it was definitely something different. I didn’t taste much from the gravy, in that sense it was almost tasteless. As for the paku, or I would still prefer a Chinese cooking style for it. 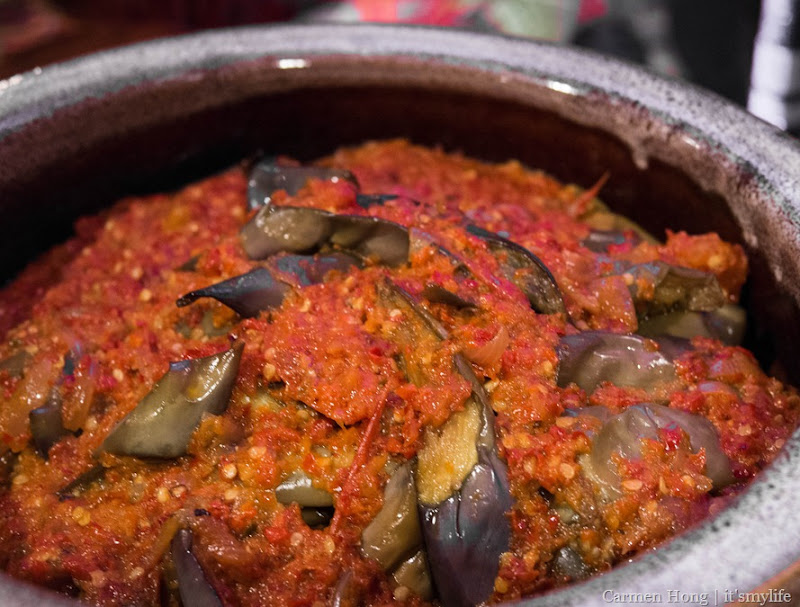 What this looks like is basically stir fry brinjal topped with whole loads of tonnes of chillies. Even more, chillies and more chilies. I do generally avoid taking chillies because I have never been a fan of them. But this being one of the Padang speciality and also because the daging version of this was finished so quickly, I thought this must be pretty awesome as well. Except it wasn’t. I mentioned it looks like it was just stir fry brinjal with chillies and that is really all that is to that, unfortunately. 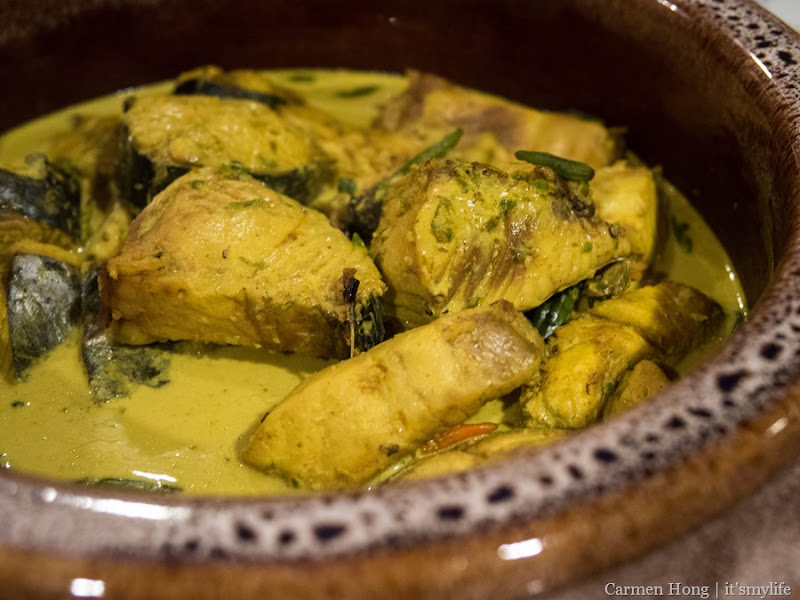 This is yet another gulai dish, cooked with cili padi and tenggiri fish. The sauce like the earlier gulai dish was a bit tasteless, when I probably expected it to be at least more creamy. It was a very plain dish, not that much unique and probably something you would usually have from the Malay stalls too 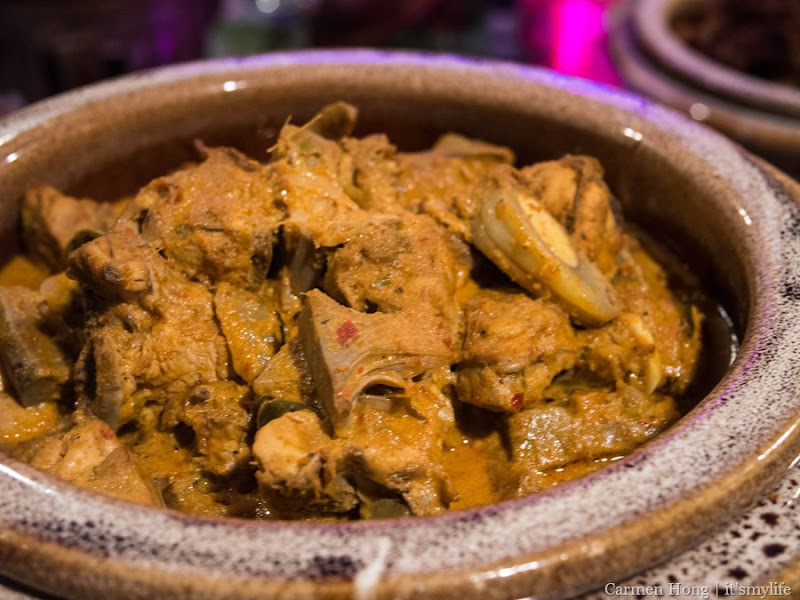 As the name suggests, it seems to be a dish cooked with one of Malaysian favourite fruit, the nangka. Or in English is known as the jackfruit. I do personally love to eat the jackfruit, especially when it is super sweet. The jackfruit itself is sweet, so when cooked most likely the dish would be infused with sweetness as well. I found this dish rather unique and it was definitely something different from the rest of the Padang dishes. 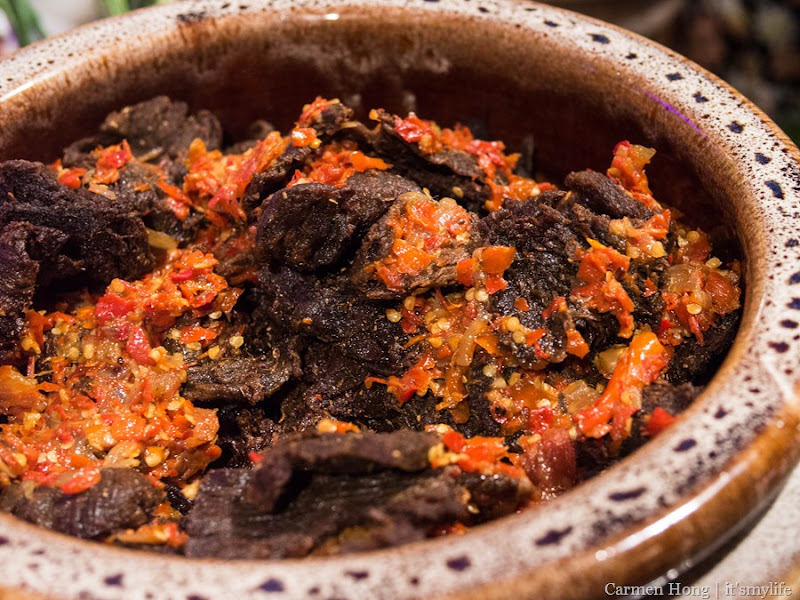 I have probably mentioned before that I avoid eating chillies because I don’t like how my skin reacts to spicy food. But when I saw this, which is actually just the meat version of Terung Balado, I decided to make an exception of eating chillies. I tried a bit of the daging, expecting it to be dry since most daging dishes would be. But I was surprised that this was not too dry. It was bit chewy, but not too bad.

There are actually a couple more Padang dishes, but I didn’t managed to capture them all. Yes, there were that many! So, I’ll list them down here anyway. The mains are Ayam Goreng Minang, Udang Kelio, Gulai Kambing, Paru Dendeng, Ikan Goreng Lado Hijau, Urat Kaki Lembu, Rendang Daging. For desserts, there is Godok Batinta (banana fritters with palm sugar), Serabi (Indonesian pancake with coconut milk), Sala Lauak (Indonesian fish ball with preserved fish filling), Cenil (Indonesian ‘onde-onde’ ). There was a special drink served, which was Es Rujak Timun – cucumber juice with lime & chili. The drink was really refreshing, it was a nice change to the usual juices. And I have to apologize for the blurry pictures, because I didn’t review my pictures after I took them. >.<

Anyway, that’s all about the Padang food for the the buffet and now, moving on to the rest of the spread. 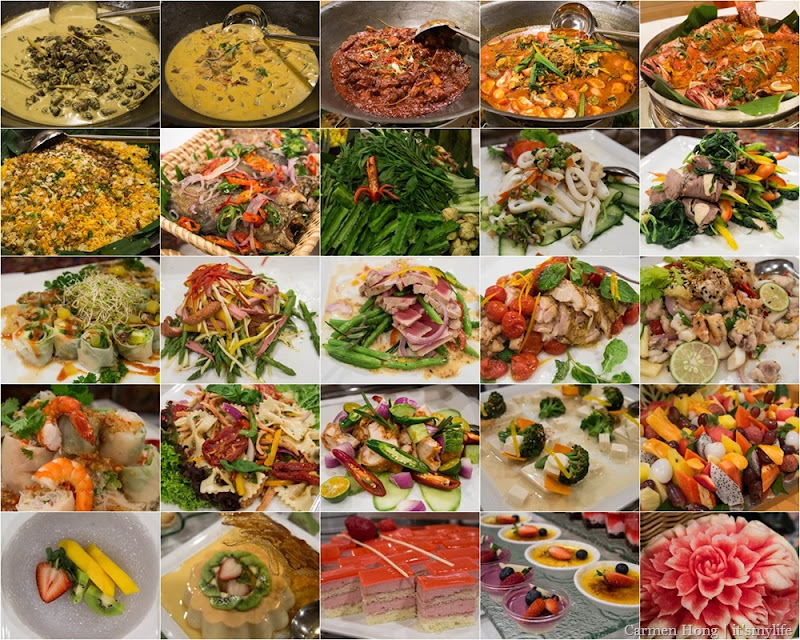 You’ll see the first row of pictures are the other types of Malay main dishes and the second row are pictures of nasi briyani, kerabu, ulam and the rest are appetizers up till the last row. The last row are desserts! I found the dessert spread quite extensive and they were pretty “photogenic” and tasty too. 🙂 The appetizers was actually some of the best I had. Again, there were a lot of variety of appetizers and most of them were cooked really well. 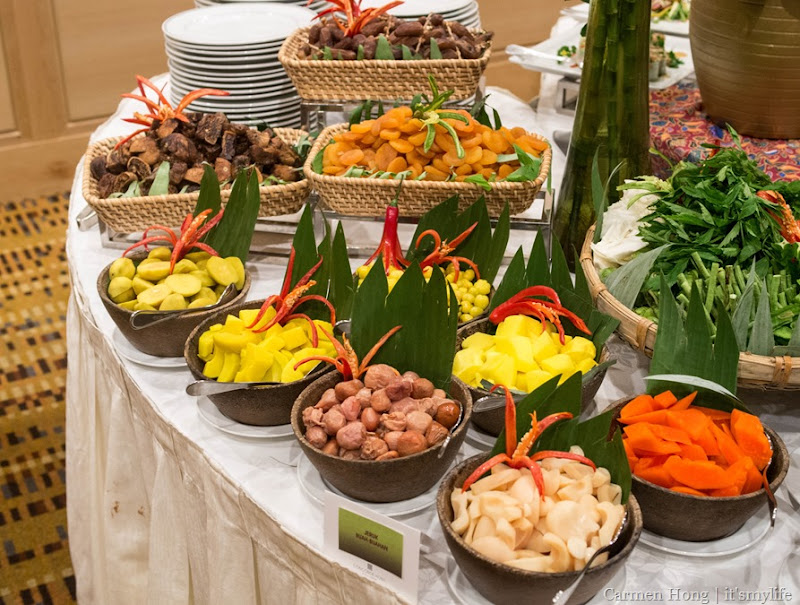 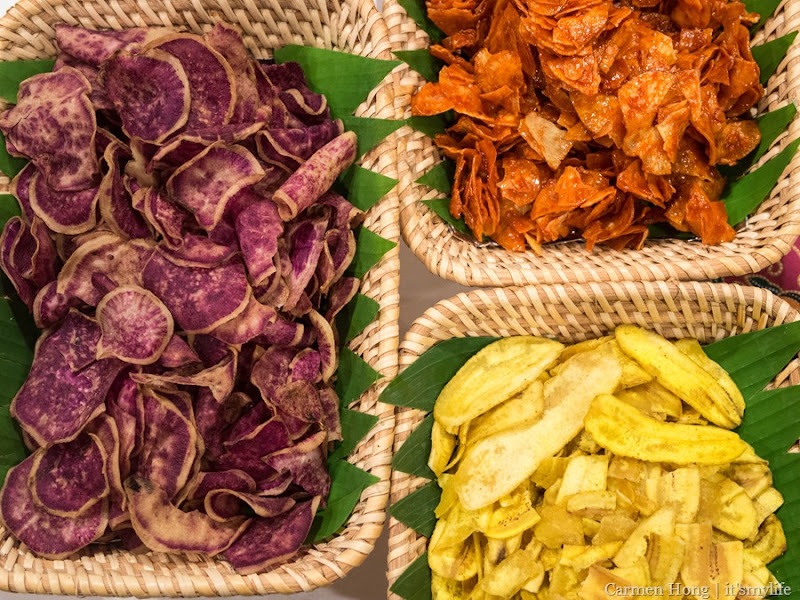 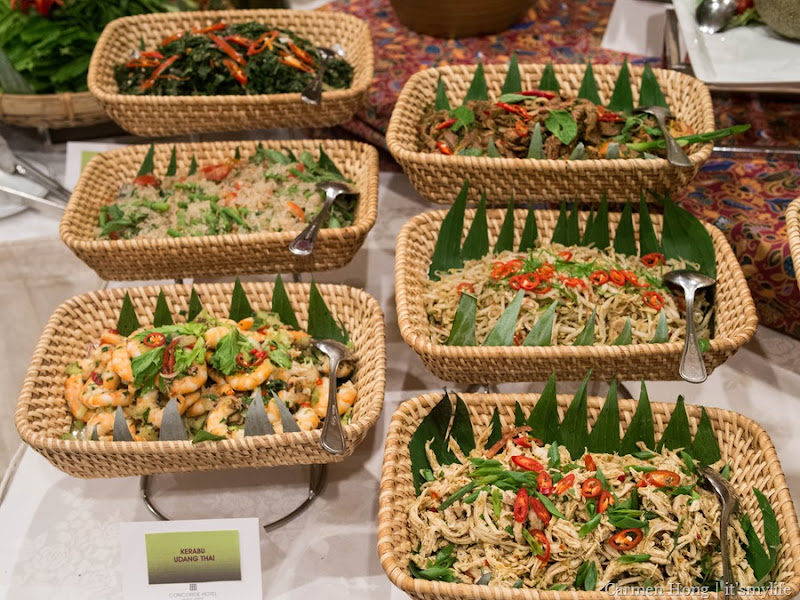 Here is the details for the Ramadhan buffet if you’re planning to visit;

And the promotion and price is as follows: