You might heard of Scott Garden, it’s one of those malls which have more restaurants than retail outlets with an almost open air walkway concept. If you been to Setiawalk in Puchong, then Scott Garden is something similar to that. So, about a couple of weeks back, I was over at Zakuro 2 which is a contemporary Japanese restaurant with apparently many years of operation but at a different location. It was one I never heard before, so I have no impression whatsoever. Having years of operation is one thing but whether the food is good, is another thing all together. Food wise, how does it fare? 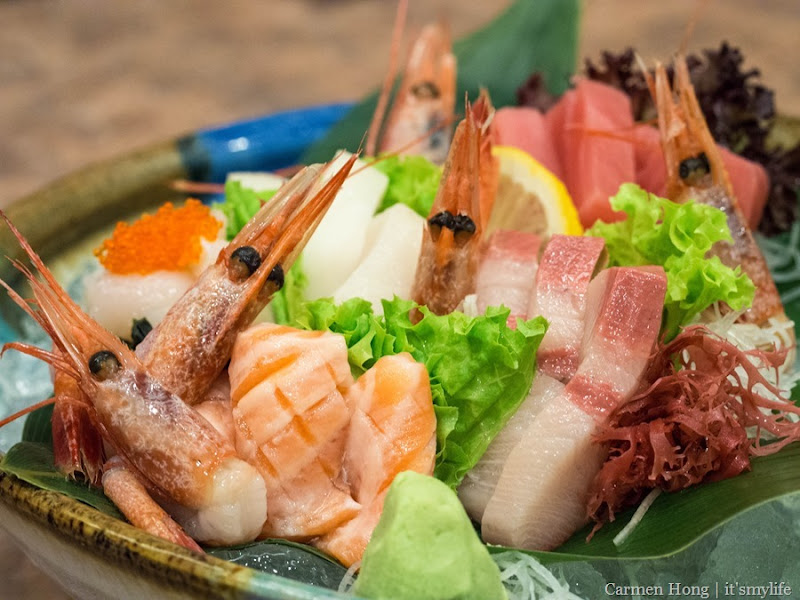 The Sashimi Moriawase is basically a platter on ice of assorted pieces of fresh raw seafood. It consists of fresh salmon, white tuna, red tuna, prawns. hotate (scallops imported from Hokkaido) and two more raw seafood which I’m not sure of. Haha.

From the picture, you can tell that it looks absolutely delish, which was enough to make me drool, just looking at it now. But, despite how good it looks, it was disappointing that the cuts were too thick and it just felt chunky in my mouth. The thing about raw cuts, is the way they are being cut, that’s basically the most important after the freshness of the seafood. In terms of that, this platter has fallen below my expectation. 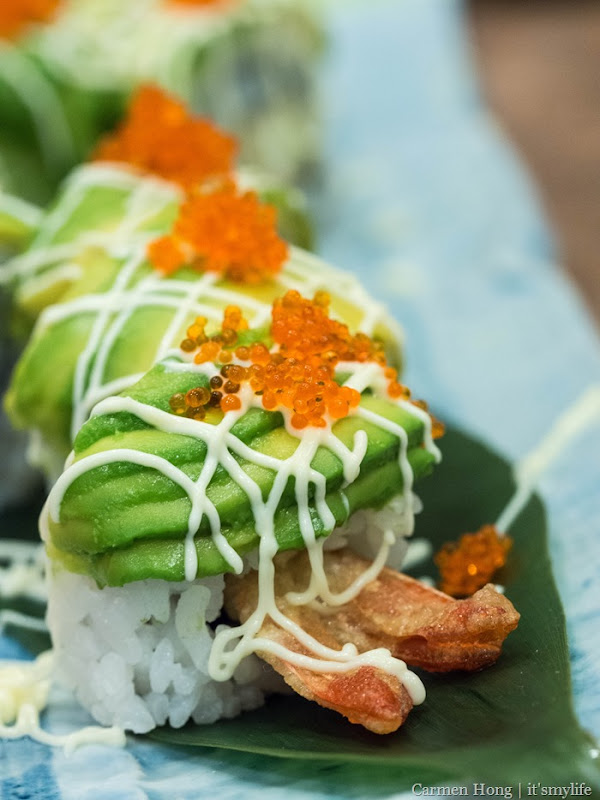 Mhmm, another delish looking dish. This is the Dragon Roll, which can be quite a staple in Japanese restaurants. I have seen them quite a bit in other restaurants. It is also in these restaurants that I started eating and actually enjoying avocado on my sushi. For this, I can say it was okay. You might not really be able to taste the prawn tempura but they certainly didn’t stinge on the avocado. 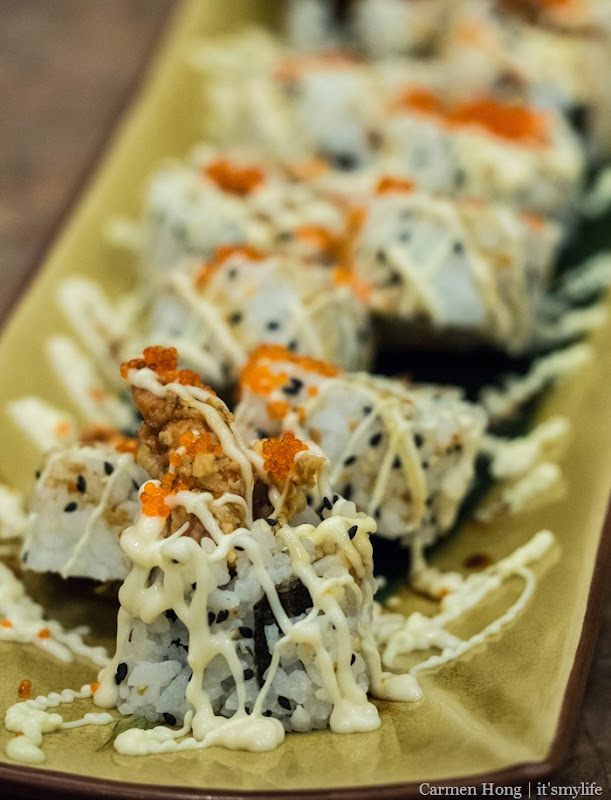 This is the Soft Shell Crab Maki, which probably is another staple in Japanese restaurants. Maybe not in the exact same way, but you bet that there would be soft shell sushi anyway. I didn’t like this because of the overzealous amount of mayo and I actually don’t fancy mayo. Besides that, I can barely taste the crispy soft shell which I expect to. Unlike the one I had Rakuzen, this was rather disappointing. I would suggest that more flesh and the crispy legs be rolled with the rice instead. 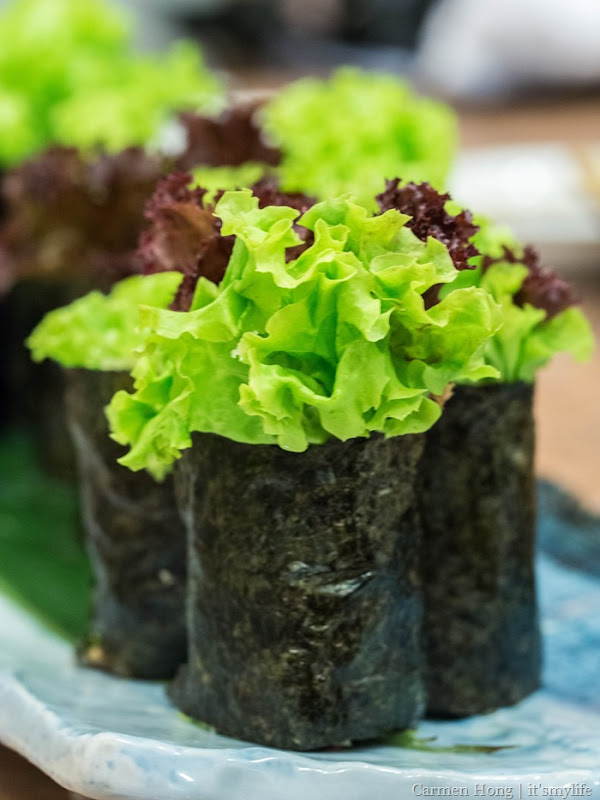 The Salad Roll is a vegetarian roll and it was one the customer’s favourite from the restaurant. Although in all honesty, I don’t understand how this could be a favourite. I love salad, I don’t mind eating vegetables but this is just lettuce, rice and seaweed. So so bland. 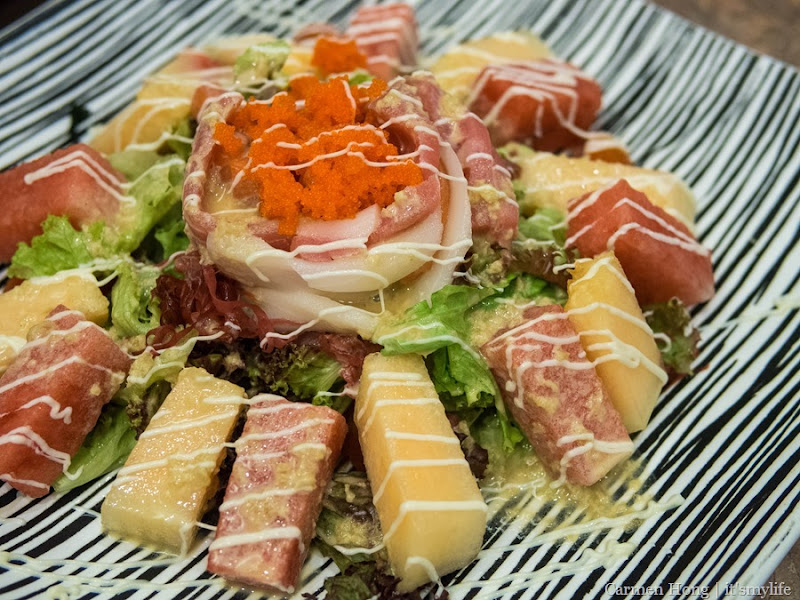 I really disliked the presentation of the food for this. Having seen the earlier dishes, when this came it was just meh. I wasn’t too confident with the choice of fruits and how it’d blend with the rest of the sashimi. There was also tempura batter crunches as toppings, which I found was just weird. In fact, the whole combination failed. 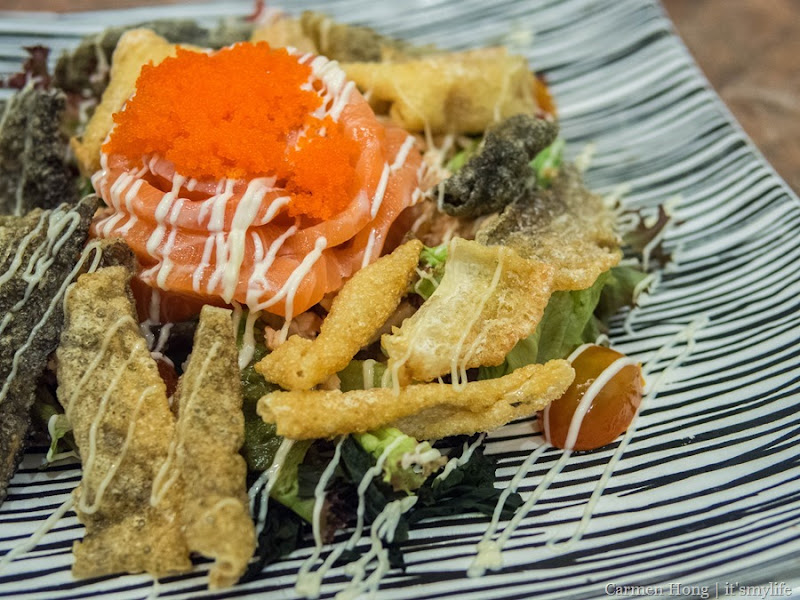 Salmon lovers rejoice with this Salmon Salad, because it’s really all things salmon. It has the raw salmon sashimi which is one a bed of cooked salmon and the sides are deep fried salmon skin. It is definitely love love, I love the generous amount of salmon skins, there is only so much I can make at home but here, it’s just awesome lot of them. In terms of the dish overall, I am not sure how well the salad pairs up with the salmon but there is bonus points for the creative bit. 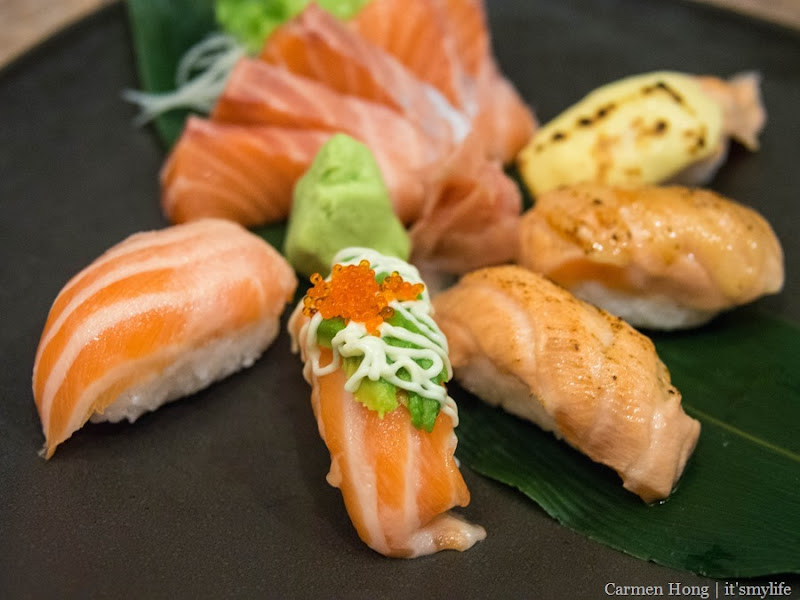 Zakuro 2 seems to aim to please salmon lovers, now with an aptly named sushi plate called Salmon Lover, which consists of salmon sashimi slices and five different types of salmon sushi. You have the one with raw salmon, raw salmon with avocado, salmon with mentaiko mayo, cooked salmon slice and one topped with cheese. 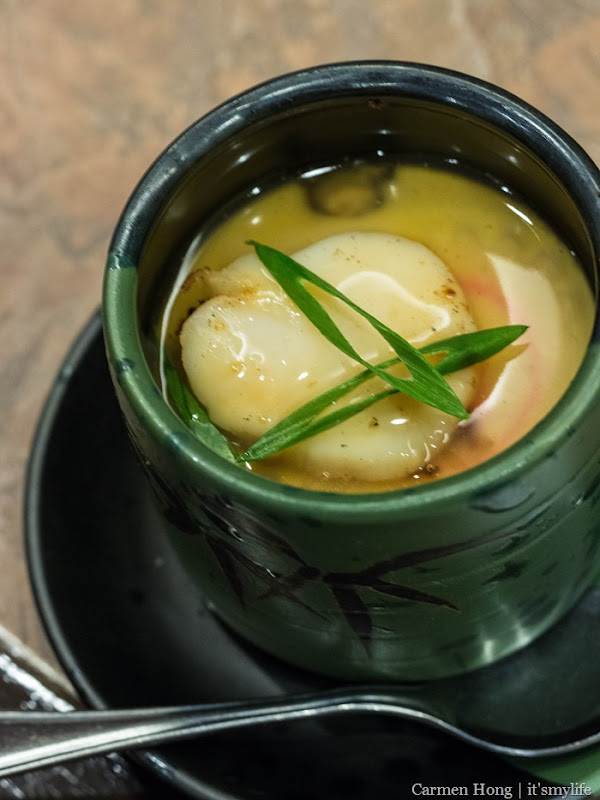 This chawan mushi is one of the most delicious, smoothest (if such a word exists) one that I have ever eaten in my entire life. It is that good, it was so smooth I was caught aback when I first tasted it. It was absolutely heavenly. This is definitely a must try, until I saw the price tag. RM20 for this, but then this was with scallop in it. Which of course is nice, but I wouldn’t mind getting the plain ones, if it was that silky smooth. 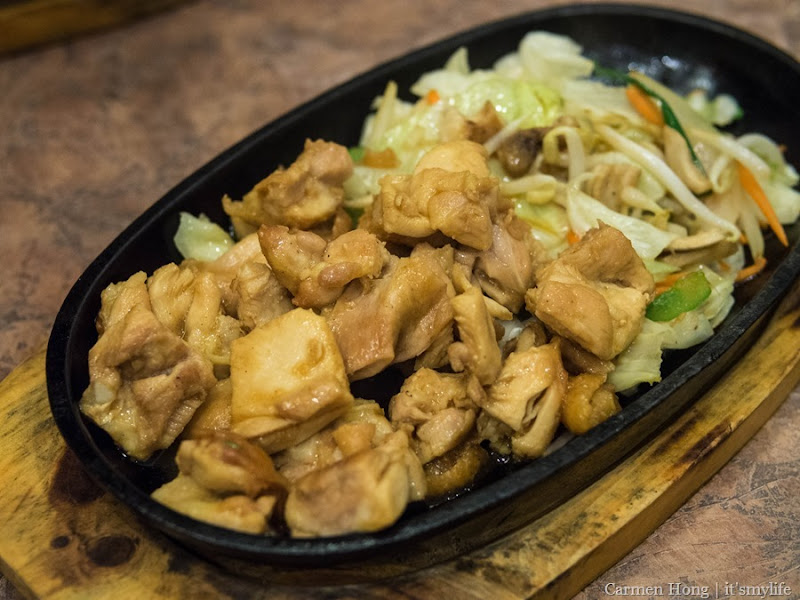 Boring, bland. That pretty much sums it. I have tasted one that cost just RM9 that was about 1000 times better than this. 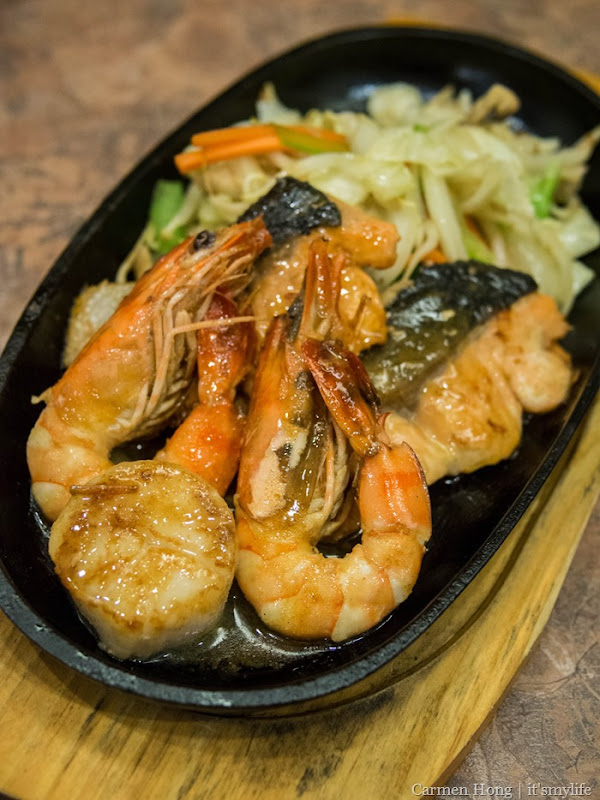 This doesn’t fare any better than the chicken teppanyaki; Tori Teppanyaki. This has scallop, prawns and salmons, which was such a waste because it was cooked that way. Plenty of room for improvement for their Teppanyaki dishes. 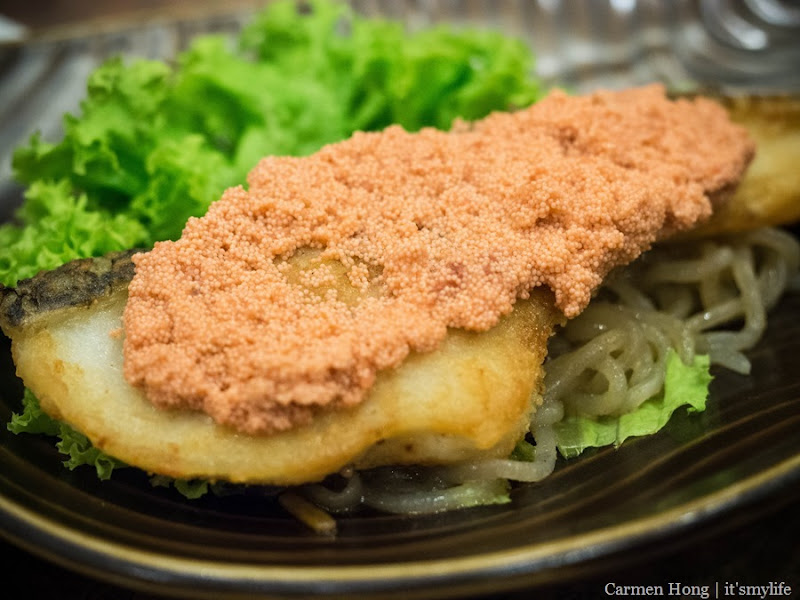 This looks glorious, I mean with the generous serving of mentaiko, what is there not to love. I actually didn’t get to try this, so I can’t say much. Haha. I just know it looks damn good. The Gindara Mentaiko as what I have been told is cod fish layered with fish roe (mentaiko) with batayaki sauce. 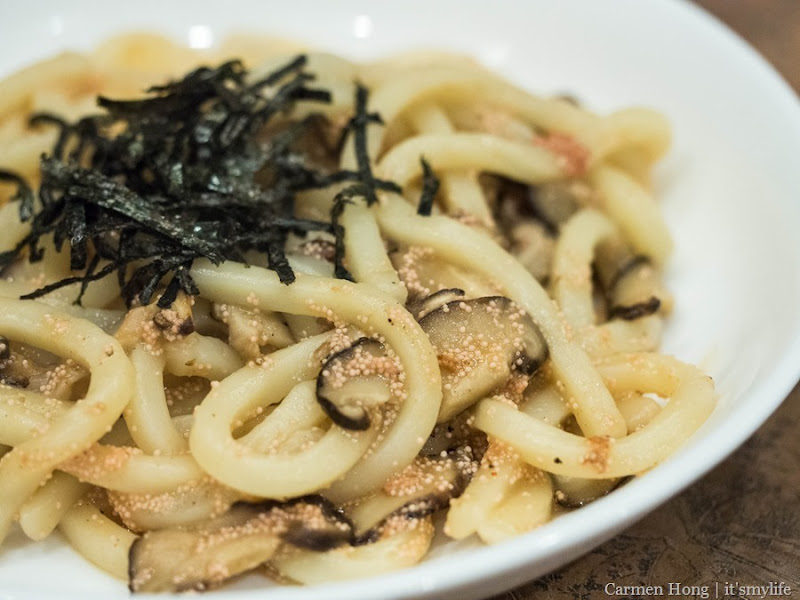 I had a couple of quick bites of this and it was really good, that I got myself a few helping. It’s basically stir fry udon, topped with cod fish roe. Most of the time, you’ll find udon pretty much tasteless but because this was stirred fried, hence the noodles was very well flavoured coupled with bits of fish roe and mushrooms too. 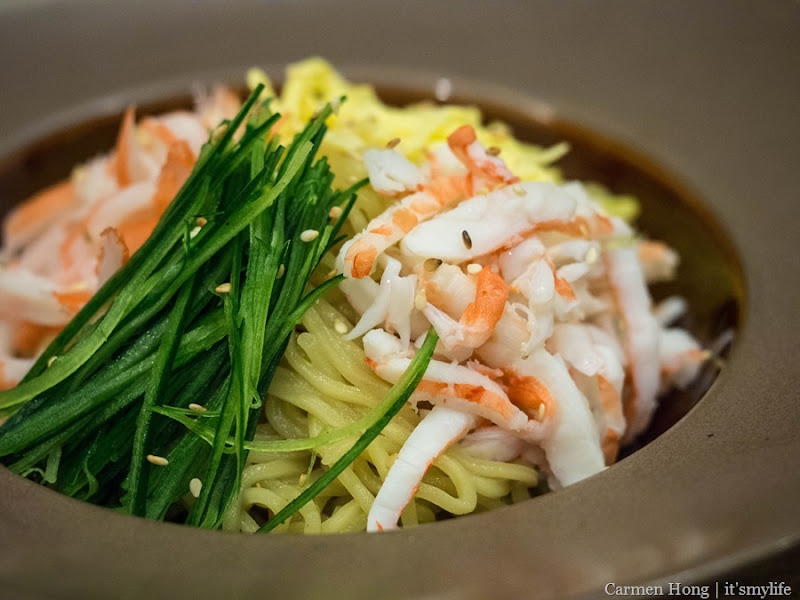 This was actually just cold ramen with prawns and vegetables, topped with special sesame sauce. It was such a seemingly simple dish, but I love, really love the surprise taste of the ramen. It was cold, and the sauce was probably why it tasted so good. Pictured above is the dish Hiyashi Ramen without the sauce.

Those are some of the dishes that I managed to try and shoot, there are actually a few other dishes that were served but I didn’t post it up because I was being the genius I am, to try to shoot with a macro Olympus 60mm lens. Unfortunately, my hands shook more often than it didn’t and my EPL5 doesn’t have the best image stabilization around, so it turned out too blurry to be posted. I would probably stick to the 14-42mm lens instead.

&. Thanks to Foodirector and Zakuro Two for having me. +