If you don’t already know, Boys Like Girls is finally back from their hiatus (where in that period, I was sadly replaying their old records and wishing for a comeback)! I’ve been following their comeback pretty closely, since they do release videos occasionally of the making of the new album. In fact, I’ve heard/watched a clip of Martin Johnson (lead vocalist) play ‘Be Your Everything’ at a music festival in United States. And so, all I did was anticipate patiently the release of their new album, “Crazy World”.

But little did I know that they were actually coming to KL to perform live for the showcase of the upcoming Rockaway Festival. =.= So much for being a fan, huh? If I hadn’t been blog-hopping, I really wouldn’t have found out and that’ll probably make me really really miserable. Thankfully I found out about it, although it was a mere few days away from the showcase. :O Lucky for me, the tickets wasn’t sold out and I managed to get my hands on a few of them. I didn’t want to go alone, so I dragged my close friends (Jason who Mumbles, Reuben and Serene) to come. Hee.

And now, I’ll let the pictures do the talking! Uploaded straight right out from my Canon S90, with no edits because it’ll be too tedious to do so. Pictures were mostly taken by Jason and some by myself. 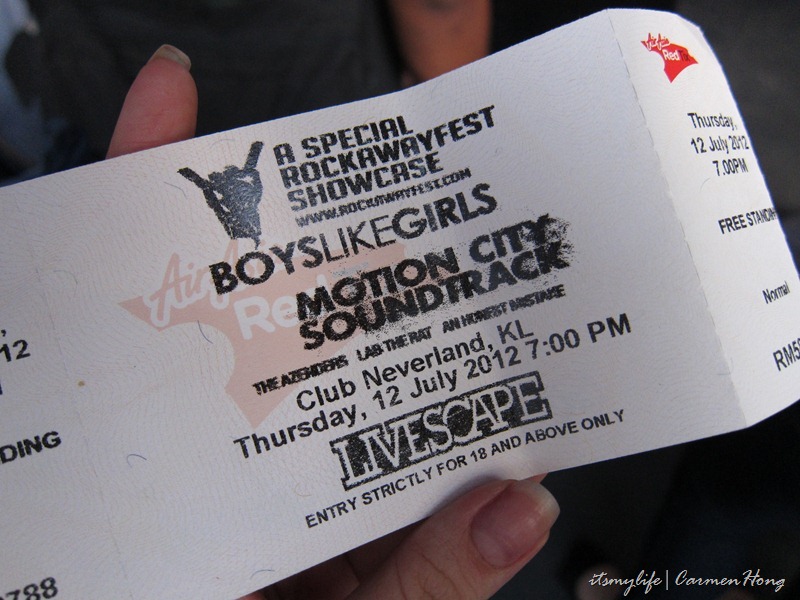 Since it was held in Neverland (a club), they were pretty strict with the age requirements; with ID checks and all. Knowing full well that it was free standing, I arrived there about 5.30ish PM, waiting forever outside for more than one hour. This is despite the management who said doors will be open at 6PM, which didn’t happen. Made us wait silly long, just for them to get the venue ready. 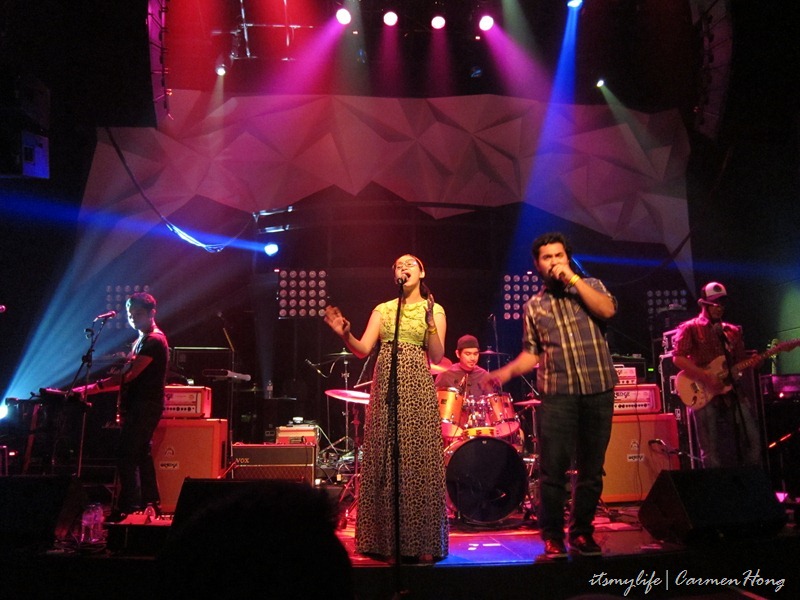 When we did finally get in, we didn’t have to wait that long for the first act to start. Of which if they made us wait any longer, we’ll all probably start flipping tables. Or not, since we are civilised. But I wouldn’t say that about the whole crowd that night. Things got really pushy and almost rowdy at some point, which could have made this experience an awful one. Luckily it didn’t get out of hand. 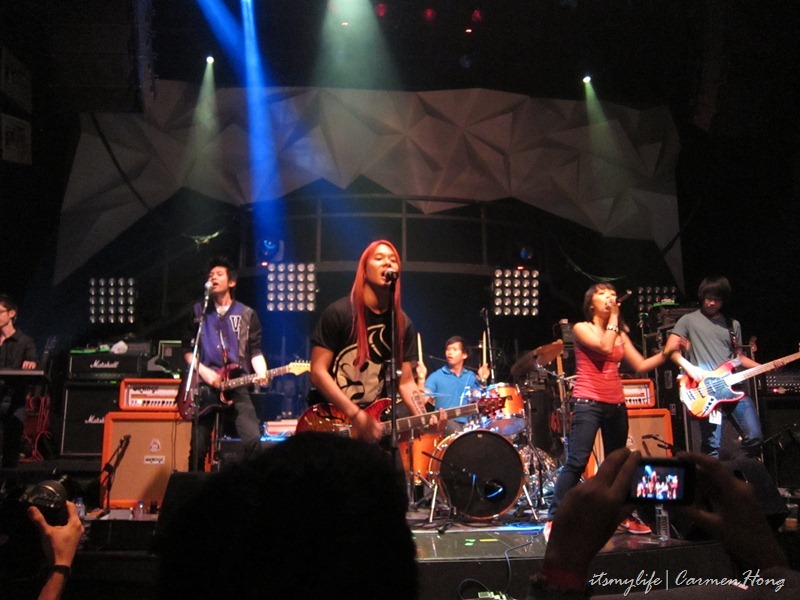 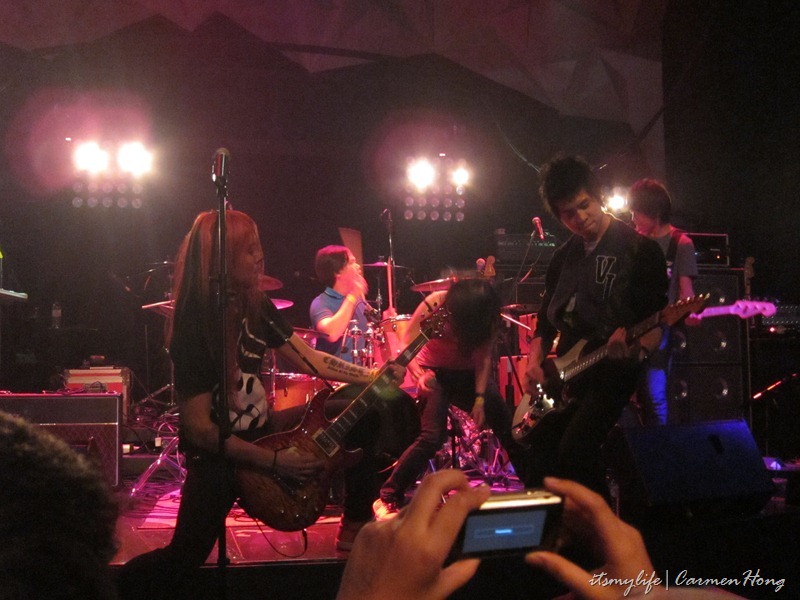 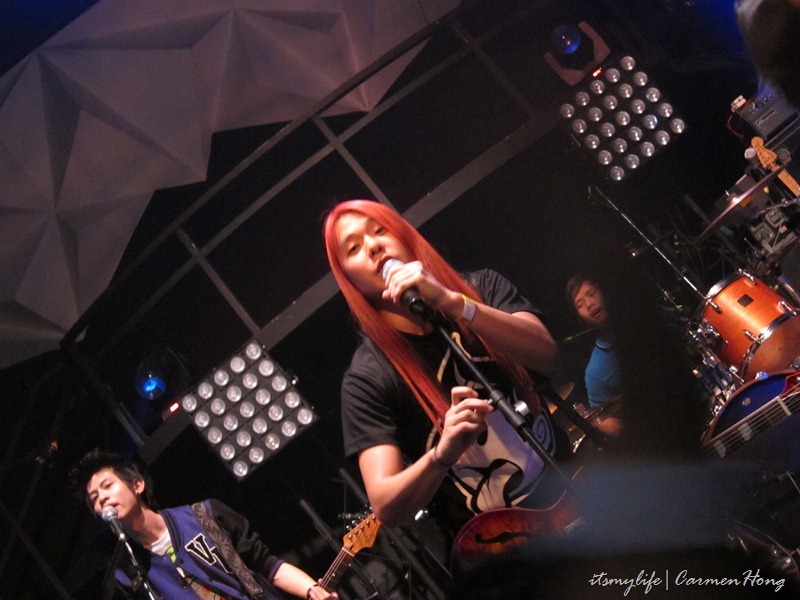 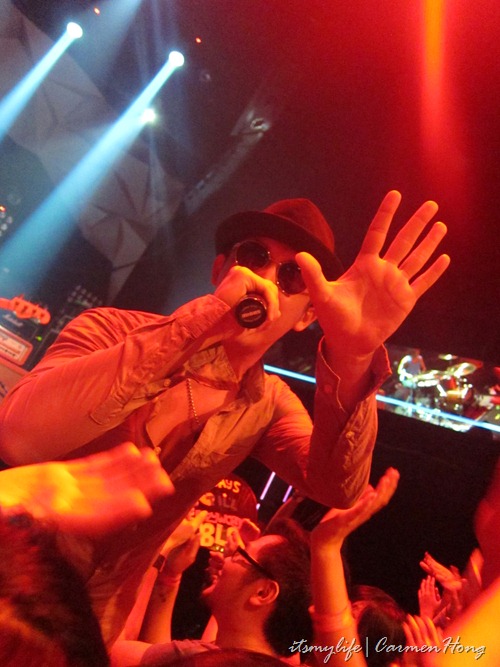 There were all together three local Malaysian bands opening for the showcase; The Lab Rat, An Honest Mistake and The Azenders. Of all these three, I only knew An Honest Mistake, but not their music. Just knew there was such a band. Turns out they were pretty good, too bad we couldn’t see much of the girl’s vocals. Similar to the earlier act as well, I couldn’t hear the lady’s voice. 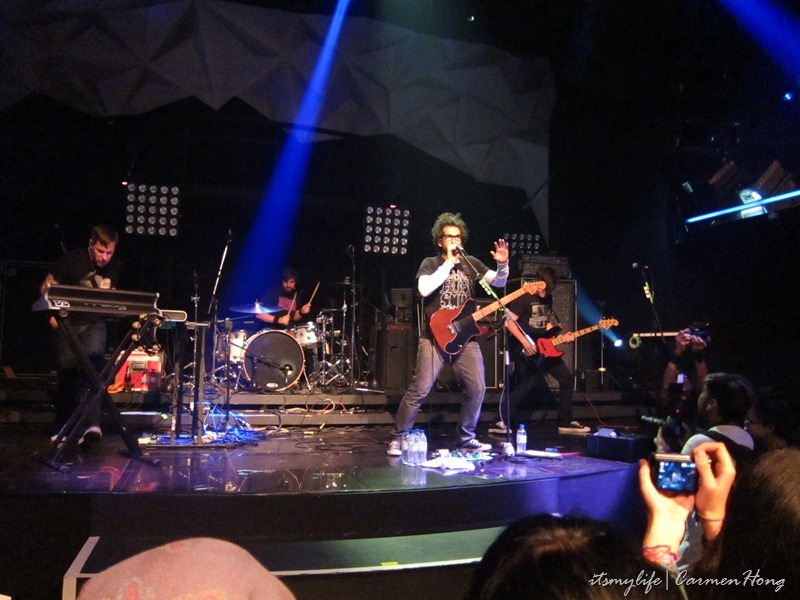 Midways through the local opening acts, one of the lead singer (I forgot which band) asked the crowd if they were excited for Boys Like Girls and then Motion City Soundtrack. And guess what, the crowd cheered louder for Motion City Soundtrack (MCS). Haha, I must say I was pretty surprised that there were so many fans here for MCS instead of BLG. I’d actually not heard of MCS before, neither was I familiar with the songs played, of which quite a number was played. 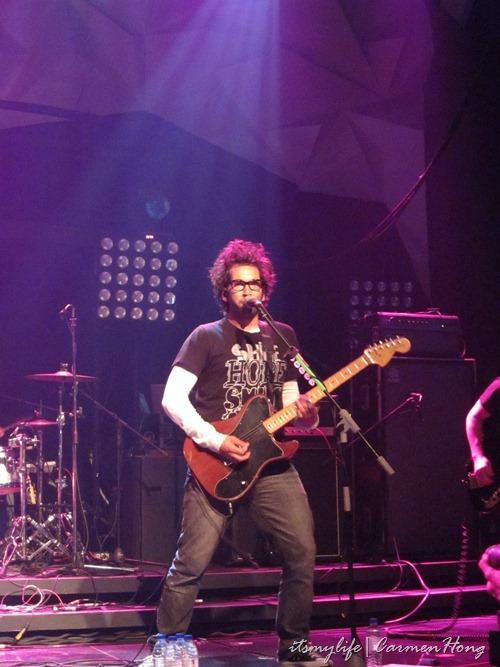 The lead singer from MCS. 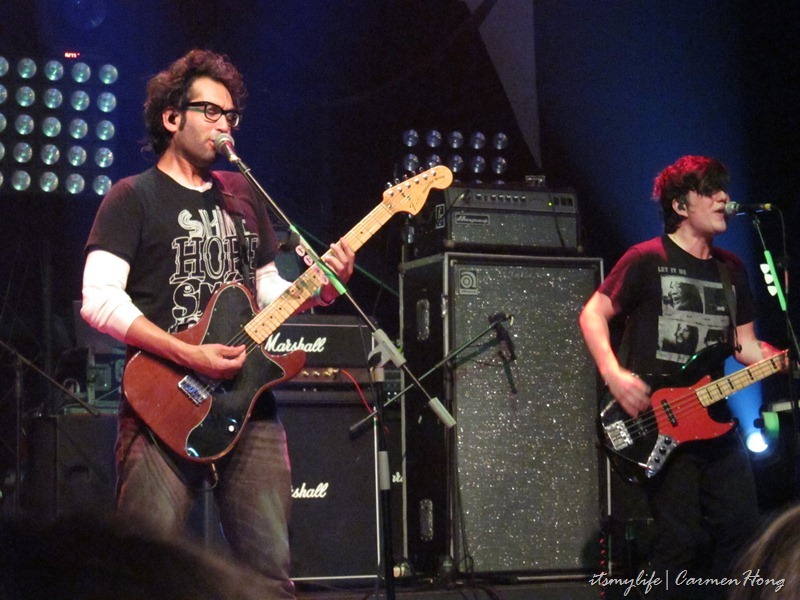 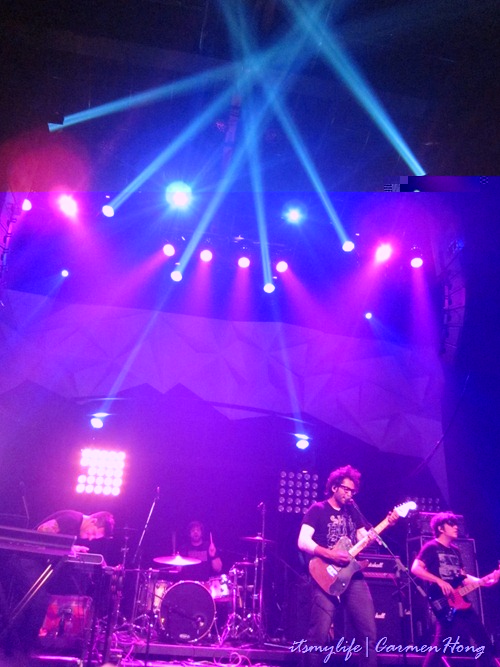 Pretty lights! The club itself was pretty small but I really like the lighting of it.

After what seemed like forever (because MCS played quite a number of songs and BLG took a pretty long time to set up the stage), BLG came on the stage! Wee! It really felt awesome to see the band again although Bryan is no longer in the band and is replaced by Morgon Dorr, who is pretty cute. At this point, the crowd or rather the girls just went crazy (but this was not when the pushing started – it was during MCS’s performance) ! Not a good picture of Paul, but he came out first. 🙂 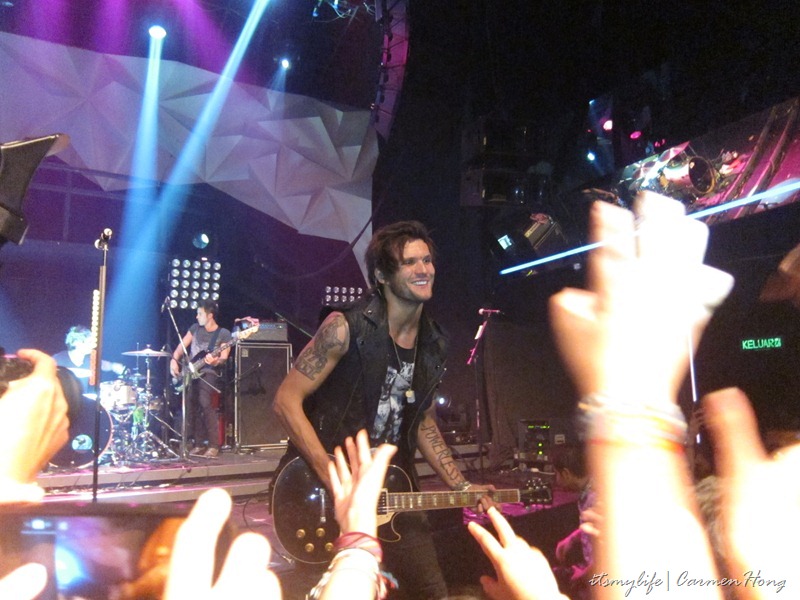 And then Martin came out and the girls just went nuts and wild. Hee.

They started out with one of their hit single, “The Great Escape” and at this point, nothing matters but to enjoy their performance. Haha, I did try to take some videos but I figured nothing beats the experience of watching them live. They played quite a number of songs, when I had actually only expected them to do like a couple, say 4 songs max. These were the songs that they played (not in sequence);

Besides playing their old tracks, they did play a few songs from their upcoming “Crazy World” album like my absolute favourite, “Be Your Everything”, “The First Time”, “Life of The Party” and “Crazy World”. I’ve actually heard the first three songs before, from their Ustream session but it was a acoustic version. And now, hearing it live, it’s really nice and I just cannot wait for the album to be released. 🙂 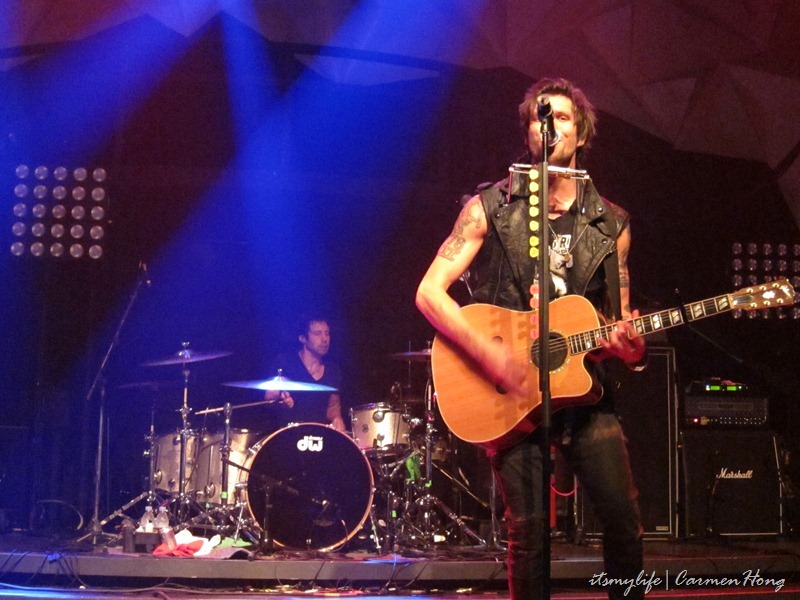 Martin, alternating between two musical instruments and singing. Talk about multi-talented much. Heh. 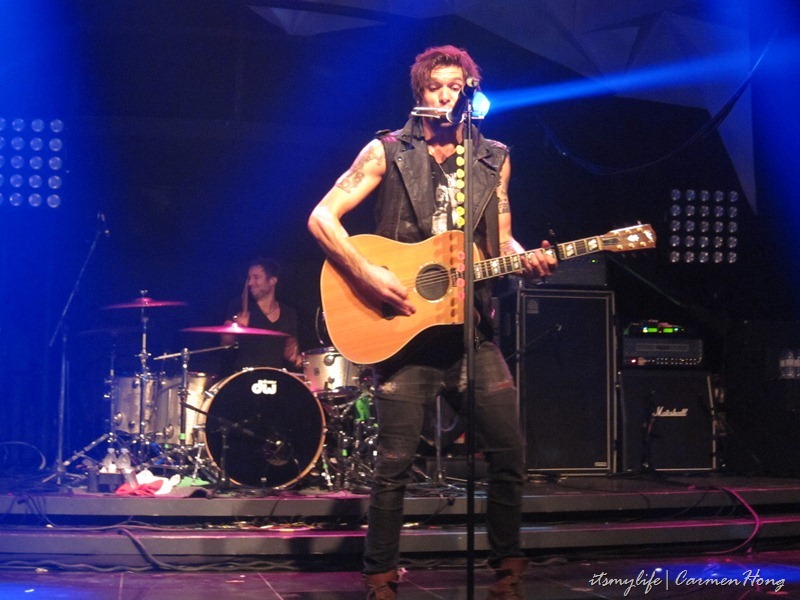 He is playing Crazy World, it has a really catchy tune. 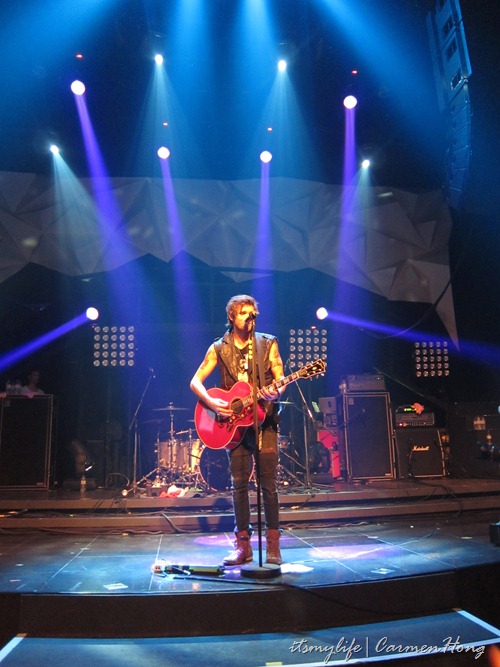 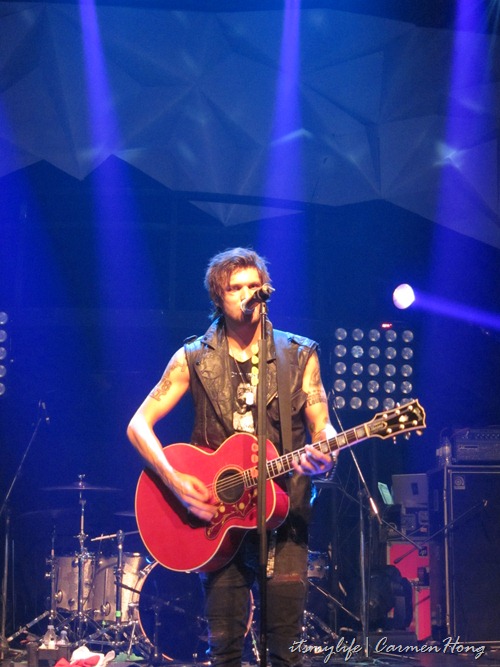 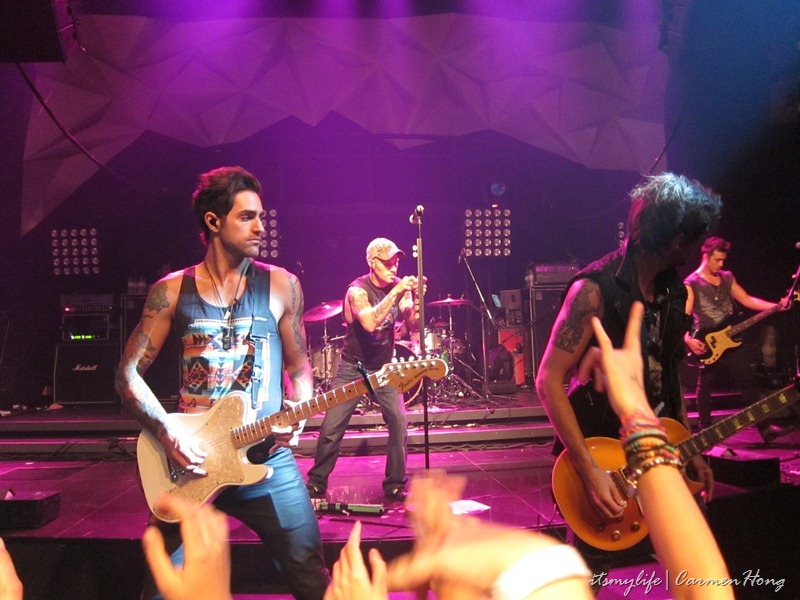 Can you spot Morgon in the far right of the picture? Couldn’t get a nice picture of him from where I stood. 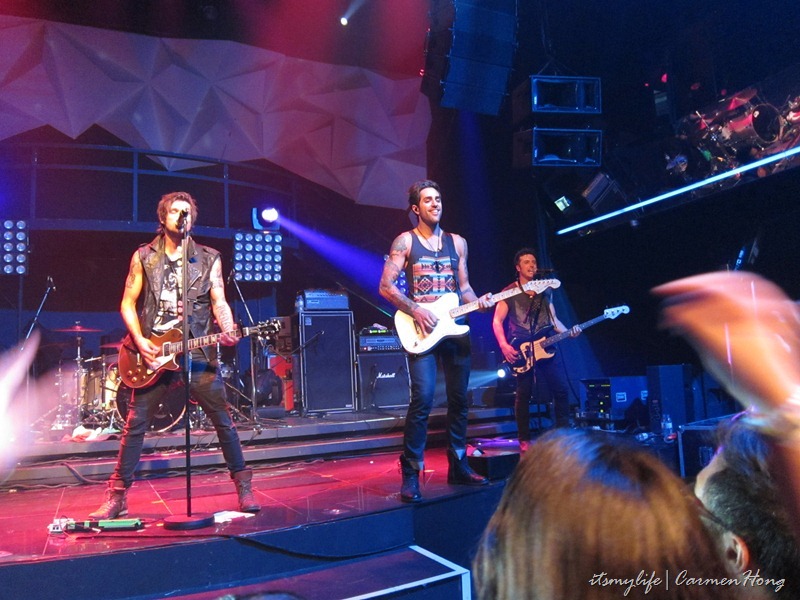 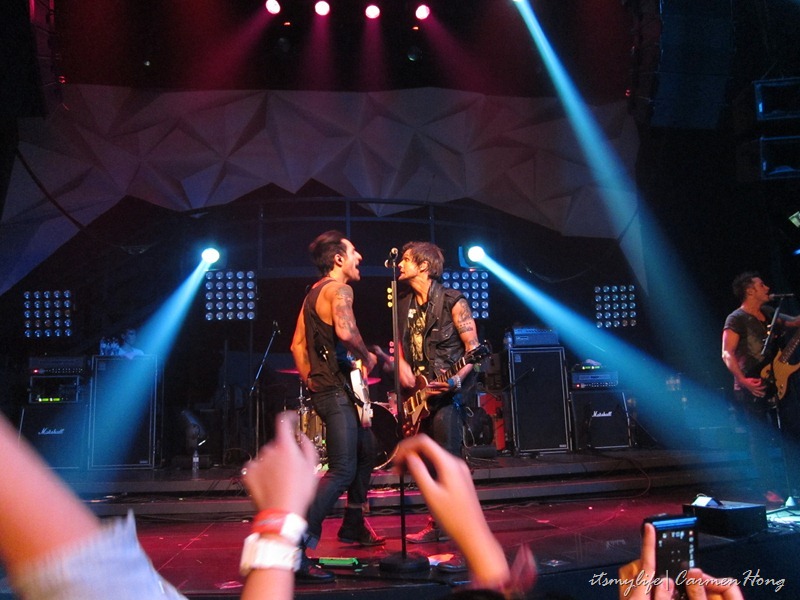 Watching them live and having them play some of my favourite songs was a definite dream come true, only that it didn’t end there. No, I didn’t get to hang out at the after party with them or got a hug or anything like that, though I really wouldn’t have mind. Anyway, Jason got me an invite to the pre-listening party for Boys Like Girls’s Crazy World, held the very next day. 😀 Talk about ecstatic much, I was going to meet them up close too. Woot.

And so, the very next day I woke up in the morning, obviously very excited that I’ll be seeing the boys later in the afternoon. I did my usual routine of checking Twitter and I realised that they were on Hitz.fm and after that, FlyFm as well. What a blissful morning, though I wished they had longer airtime for interviews.

They were on live chat on Gua as well. Best thing was they replied to my questions, haha. That totally made my day. I asked Morgon to say ‘Saya cinta Malaysia’ and he’d actually asked if he could say it, because he was afraid it was a bad word! I also told the boys that they should have sang “The First One” , a track of the second album, Love Drunk. And one of the boys said “Do you mean ‘The First Time’ (since this was one of their newer songs)?” And Martin interupted by singing a chorus line from the song, “The First One”. He went like this, the first one is the worst one, when it comes to a broken heart. <3

So, what went down at the Pre-Listening Party? Well, it was organized by Sony Music Malaysia, and we were given the privilege/opportunity to listen to the studio version of a few songs from the upcoming album, “Crazy World”. Their EP was due for release on the 17 July, but we got to hear it first before anyone in the world did on the 13th of July.

I was one of the first few to arrive, being the excited me. It was my first time at this sort of event so I had no idea that I have to hand over any recording devices over. This meant my lifeline-slash-phone, along with my camera as well. Boo hoo. Jason came late, after watching Spiderman for the second time, leaving me to stone forever.

The event kicked off with emcee, Jeremy Teo from Red.fm talking briefly about BLG’s history and went on to introduce the first song that was played. A total of 5 songs off the new album were played which were;

Like always, and one of the main reasons why I love this boy band so much, was because Martin Johnson (lead singer/vocalist) have always wrote the songs on the BLG’s album. Of course, he have co-writers as well. But I love the very idea of a musician writing and performing his own pieces.

So, what did I think of the song, from a fan perspective? Speaking from someone who have heard both their albums, I would say this new album sounds completely different than anything they produced previously. There is more emphasis on the melody, the tune and the feel of the songs now. If you love Martin’s vocals, you’ll love this new album. I’m not saying that there is less emphasis on the rest of the band members, but rather, it feels like the boys are venturing into a different music genre. Also, I feel the music is a bit more grown up, which Martin did mention during the short press conference we had after the songs.

During the press conference, I managed to ask a few questions like;

“What were your inspirations when writing the songs? (Typical, typical questions to ask, I know.) ” – For this, Martin mentioned that it was the different type of settings that inspired him. But mostly, it is usually the tune/melody that he gets, which will then lead him to start writing a song based on that very tune.

“What can your fans expect from this album?” – Again, Martin answered and he said that the tracks off the new album are those that can be played over and over again. It’s also more dynamic and very much different from their earlier records.

Also during the press conference;

Martin mentioned that he’d actually found it very hard to write love songs these days. *gasps* Because he said, it was very hard to maintain a relationship while touring. (I thought he was seeing Ashley Tishdale?!) He had also mentioned that they actually had over 200 songs and they narrowed it down to just 11 songs for the new album. These songs were mostly recorded and produced in his very own home-studio in LA.

He explained the delay in recording the new album was because at that time, the music was very much inclined to producing techno beats or dance club-ish which didn’t really suit them. They had actually tried to make a record but didn’t quite like it, so they threw the unfinished record out and took a short hiatus.

Thinking back, I should have asked more juicy questions, although I’d risked getting kicked out from the press conference and probably banned from all future events. Anyway, the new album is due for release in September, and I’m pretty much excited for it. The boys have also said they will be back early next year for a full blown concert. That I cannot wait. 🙂

After the press conference was over, I was hoping to get a picture with them but they left rather abruptly, shattering my hopes and dreams. I wished they had stayed behind, but they were moving on to their next interview. Emcee, Jeremy Teo got a picture with the boys tho. 🙁 I did get a picture of them, because they posed for the photographers. 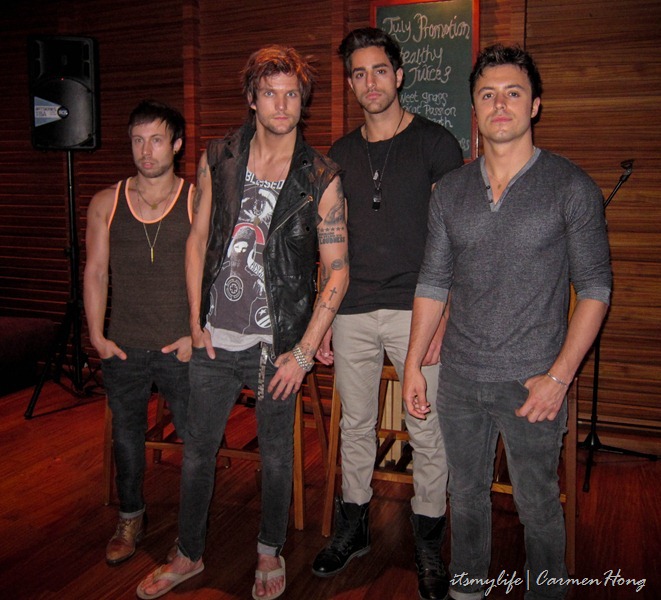 <3 My sis pointed out that Martin was wearing slippers! Haha. They did mention that they came straight from their rooms, so yea?

I know this is a rather long post, so thank you if you read the whole entry. Also, I want to thank Jason and his friend for the invite to the event. 😉